As I’ve written previously, I was very excited about Mortal Engines. With a brand new world from a brand new director shepherded by one of the greatest filmmakers of his generation, this had all the makings of a success. I kept thinking about what one of the pundits said how the casting seemed to emulate Star Wars, with Stephen Lang (Avatar) and Hugo Weaving (The Lord of the Rings) serving as the elder statesmen in a cast of fresh faces. Who were the new Luke and Leia – or, in this case, the new Katniss and Peeta? That would be Tom and Hester, played by Robert Sheehan (Mortal Instruments: City of Bones) and Hera Hilmar. (Da Vinci’s Demons). I liked the idea of an all-new cast who would grow with the roles in the same way the Harry Potter actors did. With eyes full of optimism, I sat down in the theater and waited for the movie to commence. So what was the verdict?

First, let’s start with the good. The world-building is top-notch. The director, Christian Rivers, truly created a fantastical world. If Universal built a theme park based on Mortal Engines, I’d go there in a minute. They even created their own form of currency called quirks, which is woven into what is supposed to be a wrenching scene. The airships are also fantastic and really make case for why Hollywood should give Miyazaki’s Howls Moving Castle a shot, but I digress. The music is also well done. Tom Holkenborg, aka Junkie XL, does a great job of getting the adrenaline pumping, though it’s hardly surprising given all the similarities this movie has with Mad Max: Fury Road. Commendations should also be given to sound designer Dave Whitehead and Sound Effects Editor Michelle Childs. They created a sensory experience that pulled me into the film. Unfortunately, the plot and characters pulled me out of the movie because, on these two fundamental levels, Mortal Engines fails. I have always been of the mind that story is king. Good music, sound design, and world building mean nothing if they’re not couched in good narrative and compelling character arcs. 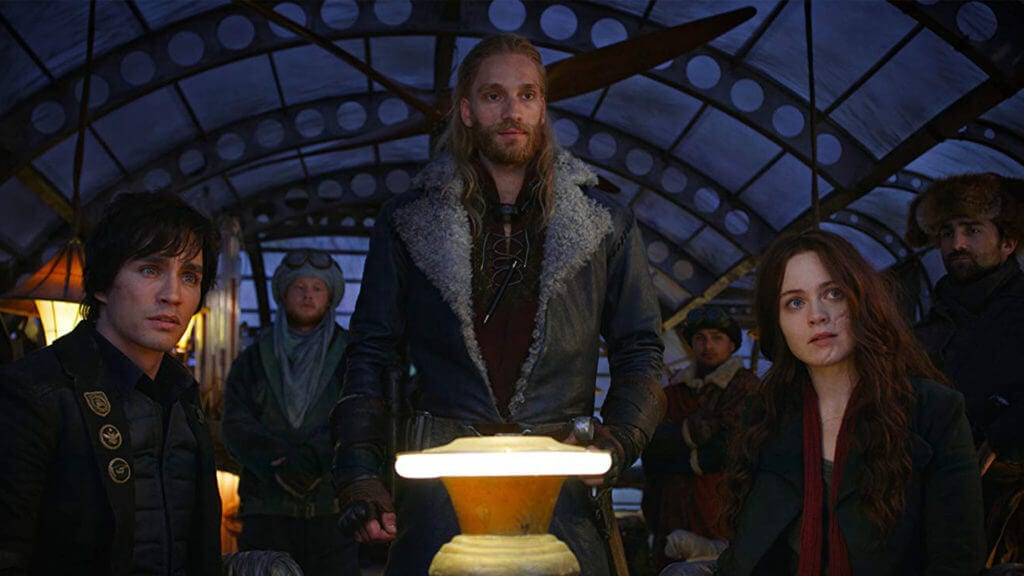 Mortal Engines opens with a big action sequence that lets us see municipal Darwinism in action: one city – in this case, London – swallowing a town called Salzhaken. The only problem is the Hester is on the town and has a big axe to grind with the city’s head of historians. Thaddeus Valentine. That axe: he killed her mother and subsequently gave her the scar that seems to make people gawk at her for extended periods of time. Anyway, Valentine has been searching for ancient relics, something that local scholar Tom Natsworthy is all too keen to help him with, but not before doing his worst Indiana Jones impression for Valentine’s daughter Katherine, who, for some reason, takes a shine to Tom. It’s never really explained why. It’s here that the film falters for the first time and never quite steadies itself. I remember watching B-roll of Raiders of the Lost Ark, where Steven Spielberg tells Harrison Ford to smile at Denholm Elliot to convey the significance of what they’re being told about the Ark. Instead of trying to present something fresh with the material, Sheehan delivers the lines to Katherine as though he’s reading off a shopping list, never really conveying a sense of wonder about it all. Now, this could’ve been intentional, considering his original desire was to be an aviator, but by speaking in such a staccato fashion, he not only robs himself of what could have been a character-defining moment, but also of a chance to get the audience invested in Tom.

Unfortunately, Mortal Engines gets worse as it goes along, particularly when Tom runs into a friend, which causes him to drop his tools. Had Tom physically done anything in this moment, it would have been less jarring, but instead, he simply says something to the effect of, “Hey, you dropped your tools” in the most wooden way possible. Katherine, who is still following him around, kneels down to help but is only treated with scorn because Valentine is the bad guy. The discovery of the latter fact is essentially what encompasses Katherine’s arc. Tom, however, finds out early and is literally pushed off London when Valentine discovers that he knows too much about what happened to Hester’s mom. Going forward, he gets thrown together with Hester in a cheap paint-by-numbers love story that doesn’t feel the least bit earned. This is hammered home when Shrike – a resurrected human played by Stephen Lang – is trying to go after Hester for not keeping a promise to him. That promise is to become a resurrected human like him and, in the process, wipe away the memories of her mother being killed. It’s actually a rather compelling scene and helps to make Shrike one of the more interesting characters in the movie; however, this idea is then gutted by Shrike’s final scene. It’s too bad because I would’ve loved to see what else he had learned from watching his Avatar costars work 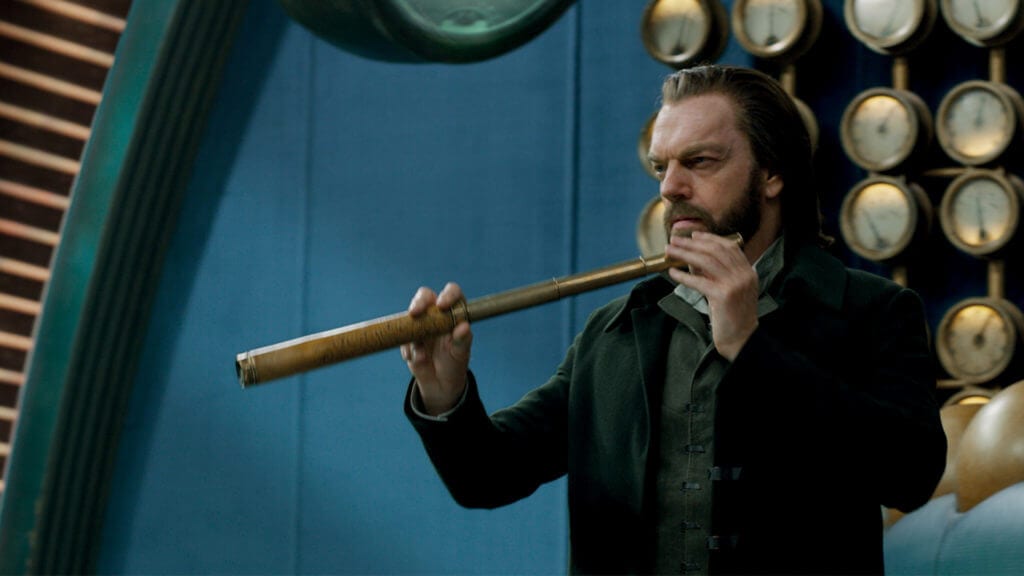 Weaving does the best he can with Valentine, but unlike Elrond and Agent Smith, there just isn’t a lot to play with in the role. Yes, he has a rather meaty backstory, but it is only told through short flashbacks from Hester’s perspective that do little to flesh out his character. As I wrote before, I was hoping Mortal Engines was going to emulate Star Wars, and it does, but in the hammiest and most obvious way possible. I suppose Jackson thought it would help to bring people back for the next one, but really, it just put me off. To put something together in such slapdash fashion is disrespectful to an audience who, frankly, can find better entertainment on Netflix. The one bright spot to this cast is Anna Fang’s actress, Jihae, who embraces her role with zeal. While it’s a shame her character arc is so telegraphed, I can’t wait to see what she does next, hopefully with better material.

Despite poor acting and wooden dialogue, Rivers did an admirable job with the world-building in Mortal Engines. I hope he gets another chance to direct one day because I would love to see what else he can do. I suppose the one silver lining in all of this is that I really want to read the book now, and when it comes to adaptations like Mortal Engines, that means a lot.

The world-building is top-notch. The music is also well done. Unfortunately, the plot and characters pulled me out of the movie because, on these two fundamental levels, Mortal Engines fails.