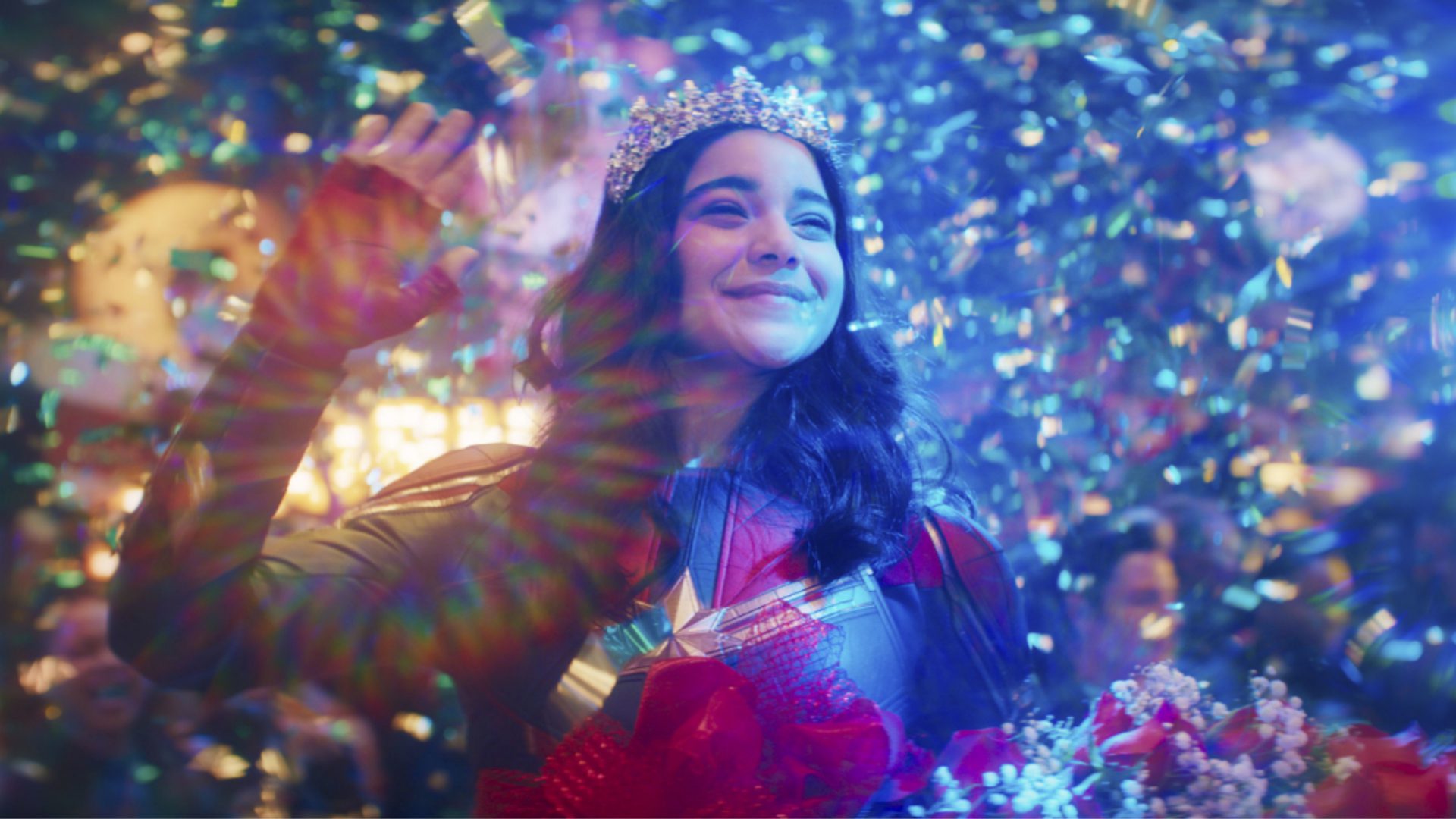 Ms. Marvel, the next in the assembly line of Marvel TV shows to hit the Disney+ shelf, released its first episode, titled “Generation Why,” today, and it’s… okay. It isn’t awful, and it’s certainly better than some of the train wrecks that preceded it (so far), but it’s trying way too hard on several levels, and it doesn’t have a whole lot of characters you’ll want to see for six weeks straight. The filmmaking, however, is quite interesting and works better than the trailer would lead you to believe.

Kamal Khan (Iman Vellani), a Pakistani – and they don’t let you forget that for a second – teenager in Jersey City, is caught between her family’s Muslim culture, her classmates’ social ostracism, and her guidance counselor’s folksy career pushing. None of them can understand why she loses herself in the “fantasy world” of superheroes, specifically Captain Marvel (no accounting for taste). But at an Avengers convention, she discovers her worlds are about to collide.

The opening scene of “Generation Why” is chock full of one of the more annoying aspects of the MCU’s phase four. It’s a few minutes of Kamala talking about how great Captain Marvel is, how she’s better than all the other Avengers put together, how she single-handedly defeated Thanos, and more patently untrue things. I get it; Kamala is a superfan of Carol Danvers, and this scene illustrates the many facets of that, including building up her hero so ridiculously that she reimagines the events of Endgame. Part of it is, admittedly, personal; I don’t like the character, or the way she was introduced into the MCU, or how she functions in it. But Kamala’s narration feels almost like the Marvel producers arguing against all the reasons people like me don’t like her. Kamala sums up her presence in Endgame by saying something like, “Sometimes amazing people just drop out of the sky,” which sounds like it’s excusing Carol’s status as a deus ex machina. And this isn’t happening in a vacuum either; WandaVision and What If…? both make sure to tell us how amazing she is, and now Ms. Marvel – where it’s actually more appropriate – feels like more of the same. I’ve never seen a studio work this hard to convince people to like a character.

The other thing the opening scene does is establish Ms. Marvel’s visual style, and at this, it’s much more successful. Remember the end credits visuals of the three MCU Spider-Man movies? It’s like that; drawings come to life, acting out what Kamala is saying, doing, or thinking. On paper, this sounds annoying, but it works in the show. Kamala is always drawing something, be it Captain Marvel, caricatures of her teachers, or just random silly monsters and stuff. Often, the drawings become animated and function as a kind of Greek chorus. The drawing of the teacher, for instance, talks alongside the actual teacher as she’s scolding Kamala for doodling in class, as if to tell us that this is why Kamala sees her teacher that way. (This is great casting in a tiny part, too, by the way; no offense to whom I’m sure is a perfectly nice lady, but she looks like that battle axe of a teacher we’ve all had at some point.) It even extends to emoticons, which appear in puddles on the street or neon diner signs to tell us what Kamala is texting to her best friend. This is a great way to build a character, to let us know who Kamala is through filmmaking.

That inventiveness pretty much ends with Kamala, though. Everyone else in “Generation Why” is either a caricature or overdosing on quirk, and it gets old fast. Kamala’s family have their silly switch cranked all the way up, constantly making jokes or saying things about their religion and heritage that are supposed to be funny but are just kind of corny. Think My Big Fat Greek Wedding, only not as funny, clever, or charming. I’m sure this is the brainchild of someone who decided that they needed to make a Pakistani Muslim family “relatable,” and that meant going overboard on the comedy. That’s insulting to pretty much everyone; the implication is that Pakistanis aren’t “normal” enough, and everyone else is unable to accept anyone who’s even slightly different from them. And there are ways to do this right; the first two seasons of Master of None are terrific with that. (I didn’t watch the third because it’s not even about Aziz Ansari.) The rest of the cast are just stock characters: Kamala has a doofy best friend who’s an electronics genius; the guidance counselor is a hippie-dippy weirdo who wants the kids to call him by his first name and drinks from a Hello Kitty (or something akin to that) coffee mug; the popular girl at school is dismissive of Kamala. They’re accoutrements and nothing more.

It’s a shame because when “Generation Why” stops trying so hard, some of these elements complement Kamala’s character and what I assume her arc is going to be. In one scene, Kamala and her mother are shopping in a Muslim neighborhood. As Kamala tries on a dress, her mother talks to the shop owner about a local girl who declined a marriage proposal to travel to Europe and “find herself.” While Kamala thinks this is great, her mother and the shop owner think the girl is throwing her life away on a flight of fancy. This is what Kamala is feeling in her own life, being caught between a culture that wants her to be grounded and practical and her desire to have adventures and figure out what she wants to do for herself. And it’s done in a way that doesn’t cast anyone as particularly wrong. The same is true when Kamala’s mother catches her sneaking back into her room after going out against her parents’ wishes. Her mother doesn’t get nasty or angry; she’s hurt and worried about Kamala. I don’t know where the show will go from here – though I can guess – but it will be better off if it has more of this and just lets its characters be human rather than unfunny joke machines. Iman Vellani and Zenobia Shroff, who plays Kamala’s mother, are certainly up for it. 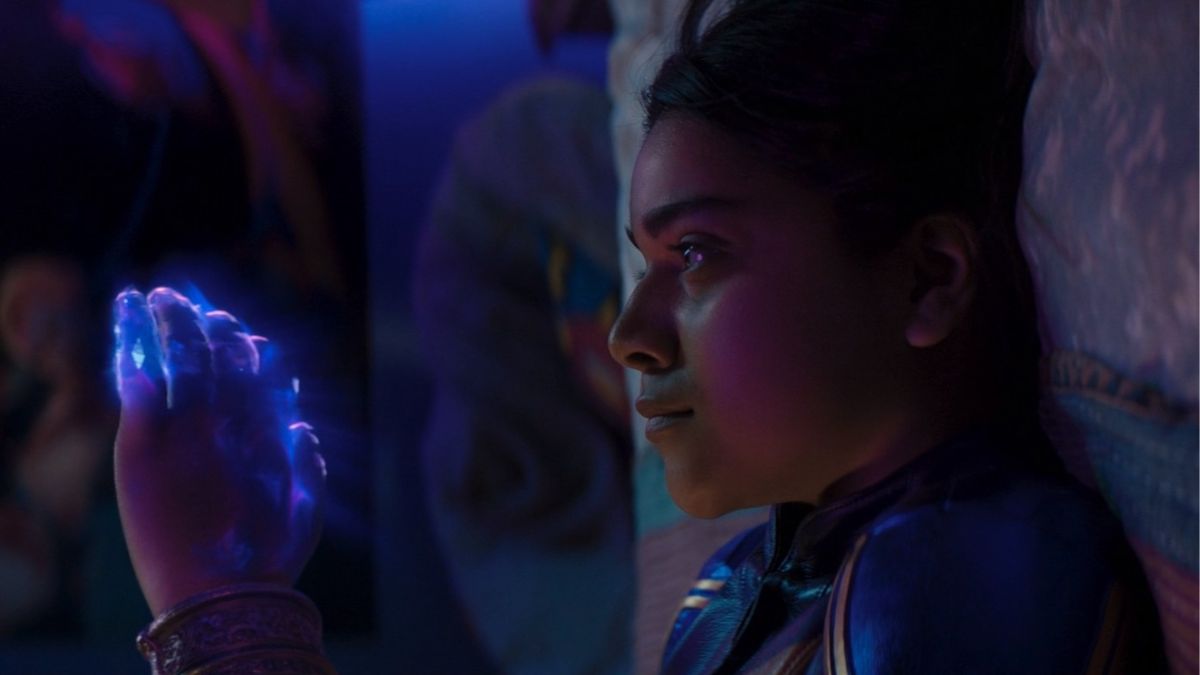 I’ve been focusing almost entirely on character because, plotwise, next to nothing happens. “Generation Why” is a setup episode, here to establish the characters and, in the last ten minutes or so, introduce the story. As far as it goes, Kamala and her friend want to go to Avengers Con, which is exactly what it sounds like, except in this world, the Avengers are real. (When you think about it, that makes the arguments the adults keep making kind of silly; how are Kamala’s dreams “fantasies” when superheroes are real and the entire world knows about them?)  The event is held at Camp Lehigh, the Army base where Captain America was trained, and the inside looks like a real convention, with plenty of Marvel references sprinkled throughout. Kamala wants to win a cosplay contest – as Captain Marvel, naturally – but her friend advises her to put a little bit of herself into the costume to make it more unique. This means using elements of her heritage, so Kamala goes into her attic and wears a bangle that belonged to her grandmother. And wouldn’t you know it – the bangle gives her superpowers! She can do… energy stuff. Her powers aren’t defined all that well yet, but they have something to do with creating energy and using it to form solid objects, like a hand or a platform. We’ll see how her powers work down the line, I’m sure, but for now, they’re kind of unspectacular. What works better is that they seem to be a marriage of her culture and her fandom, and that has a lot of potential. And that’s mostly what “Generation Why” is: unrealized potential. (Was this show trying to make me take a homonym dig at myself?)