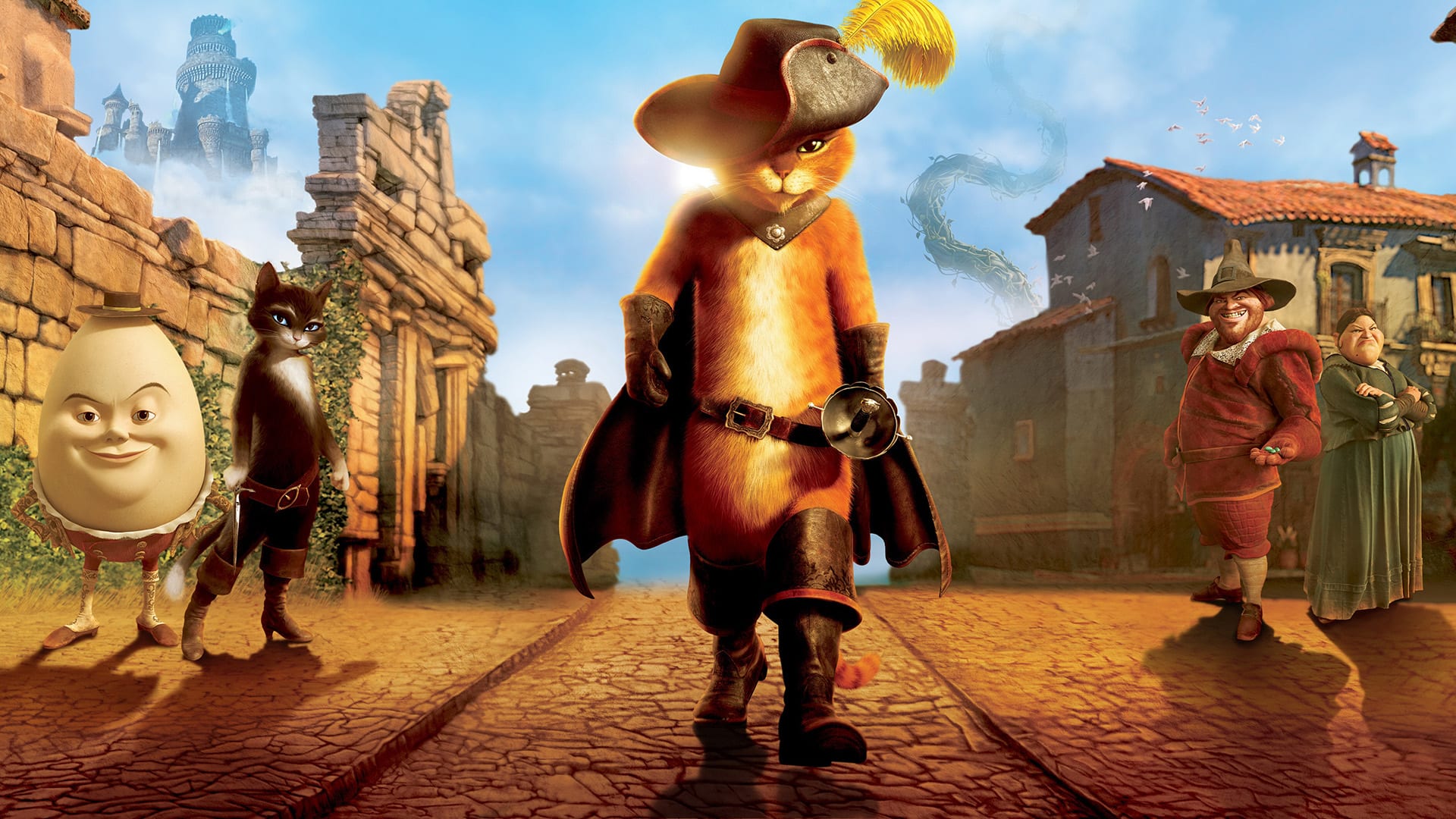 After four successful films, a series of holiday-themed TV specials, and a slew of merchandise and games, it only makes sense that Shrek would get a spin-off. 2011’s Puss in Boots serves as a prequel to the main Shrek movies and shows us what the fan-favorite ferocious feline did before meeting Shrek and Donkey. This is a movie I only saw once when it was new. I remember thinking it was okay, but not anything particularly special. That’s pretty much how the film was received on the whole, too; Puss in Boots was a financial success and has decent scores online. But people rarely discuss it anymore, even when talking about the Shrek films in general.  Let’s see how it holds up a decade later.

Puss in Boots is immediately established as a swashbuckling ladies’ man as he leaves a sleeping girlfriend behind and steals a ring from a chained human man. Puss wanders into a bar where the patrons reluctantly tell him about magic beans, the score of a lifetime. The only problem is that their owners are Jack (Billy Bob Thornton) and Jill (Amy Sedaris), a pair of unscrupulous ruffians who don’t want to part with them. Puss crosses paths with Kitty Softpaws (Salma Hayek) and Humpty Dumpty (Zack Galifianakis), who want to team up and get the beans. However, Puss and Humpty have a dark past together, and Puss may not be ready to forgive.

My first thought, whenever I think about this film, is how unnecessary it was. The main Shrek series was over by this point, and while Puss in Boots was a cool character, I don’t know how many people were clamoring for his backstory. However, Shrek 2 wasn’t necessary, and I think it’s vastly superior to the first one. So how does Puss in Boots compare to the other Shrek movies? It’s completely different. While it still exists in a vague fairytale world, Puss in Boots feels so much smaller than any of the Shrek films. Smaller stories can work well – and, in some cases, better – than grand quests. I find simpler movies work best when they focus on the characters and their development. Puss in Boots gets some background, and we see how he operates without Donkey and Shrek in this movie. However, I don’t see the need for this story because he starts out as the exact same person he is in the Shrek movies. Puss doesn’t have much of an arc in his own film, and, as such, nothing that happens here informs his character in his previous appearances.

The main conflict Puss faces in his solo movie is his inability to trust and forgive Humpty. However, I don’t see why he should trust or forgive someone who tricked him and ruined his reputation. The circumstances are different, but this reminds me of Raya and the Last Dragon. Raya was “wrong” for not trusting someone who betrayed her twice before, just like Puss is “wrong” for holding a grudge for completely valid reasons. I guess it’s only fair to point out that Puss in Boots doesn’t judge its protagonist as harshly for the lack of unearned trust as Raya does. However, that makes it even more baffling to make the distrust between the two such an important part of the movie.

It doesn’t help matters that Humpty is extremely annoying. I’m not sure if this is what Galifianakis was going for in his line delivery, but his personality is pretty awful, too, so at least it fits. Humpty is utterly untrustworthy, and even his attempt to “make amends” with Puss ends up being another trick. When Puss and Humpty are kids, they both end up in Imelda’s (Constance Marie) orphanage. Humpty is a bad kid who convinces young, impressionable Puss to run scams with him. This disappoints Imelda, whom Puss sees as a mother, and gets the two into serious trouble. When Puss is older, he saves the Commandant’s mother and earns the respect of the whole town. This is where he gets his boots and diverges from Humpty’s path. Rather than following Puss’ example, Humpty tricks him into helping him commit another crime. Not only is this a valid reason for Puss not to trust Humpty, but I think he would be stupid to trust him after this.

And that proves to be the case when Humpty’s latest get-rich-quick scheme turns out to be a plot to frame Puss for destroying their hometown. Puss in Boots then has the audacity to give this character an unearned, immediate redemption when he decides to help Puss save the town after all. He even dies, as if anybody would feel bad for this guy after watching the whole movie. I don’t understand the logic behind this character and his relationship with Boots. He’s not likable, and his reasons for what he does are irrational and ridiculous. At the end, he and Boots reaffirm that they’re “brothers forever,” but this really doesn’t feel earned. It could have been interesting had they done the work. Treasure Planet has a great example of a familial bond between its protagonist and villain despite their differing goals and priorities. But in that movie, Silver’s development was gradual and tied to his feelings about Jim. Here, Humpty is just mean to Puss for most of the film and suddenly decides not to kill everybody after all. Good for him, I guess?

I like Kitty alright, but they could have done more with her. They give her the same tragic backstory as Mittens from Bolt, where her humans declawed and abandoned her. I think this doesn’t work too well for me because it’s one small line of dialogue where she tells Puss. I think a flashback to her happy life with her family would have had a lot more impact, and it wouldn’t even take long. I don’t understand her relationship with Puss, either. He likes her and even says they should stay together after the mission, but she never reveals the extent of her feelings for him. I guess it doesn’t really matter since she has to be gone by Shrek 2, but why even include her, then? What was the point? This reminds me of Solo because they try to explain every random detail of Puss’ backstory and even give him a throwaway love interest. Puss in Boots is one of my favorite Shrek characters, if not my very favorite. He’s a cat, he’s funny, and Antonio Banderas is great in the role. But that doesn’t mean he needed his own movie or the multiple TV series he apparently stars in for Netflix. That was news to me.

However, this movie isn’t all bad. Some of the comedy works pretty well; I still like Puss’ Zorro shtick. Jack and Jill are quite funny, owing much to the voice talent behind them. The cast is pretty great in general, in fact. Banderas has natural chemistry with perpetual co-star Salma Hayek. While Galifianakis annoys me, I can’t really blame him. This character is annoying all around, so I find it likely that he did a good job with a bad character. In addition to having a forced redemption and weak relationship with Puss, Humpty isn’t even intimidating as a villain. This character just doesn’t work, and I don’t think any actor could have saved him. The animation is pretty good, even if they don’t go very ambitious with the environments and character designs. The music by Henry Jackman is actually very lively and hummable. 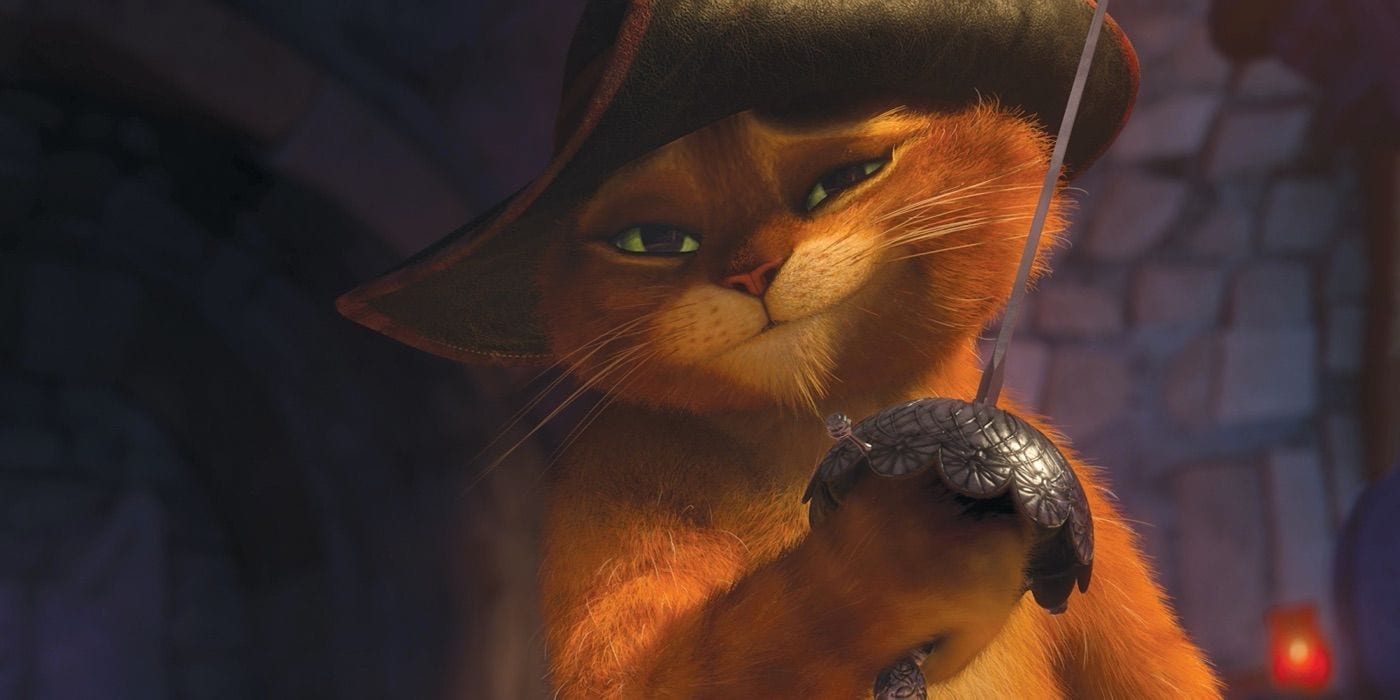 Overall, Puss in Boots is likely to disappoint you if you expect anything at all. The animation, voice acting, and music are pretty good. But for me, technical competence can’t mask bad writing and a story that didn’t need to be told.

Puss in Boots is likely to disappoint you if you expect anything at all. The animation, voice acting, and music are pretty good. But for me, technical competence can't mask bad writing and a story that didn't need to be told.

You are literally one of the best reviewers on internet (seriously). You summerized my thoughts on this movie perfectly well. You deserve an A+ and a medal for all your reviews!

Thank you very much! That’s awfully sweet of you to say. Thank you for reading