“It’s rude enough being alive when no one wants you, but showing up uninvited to a wedding?!” 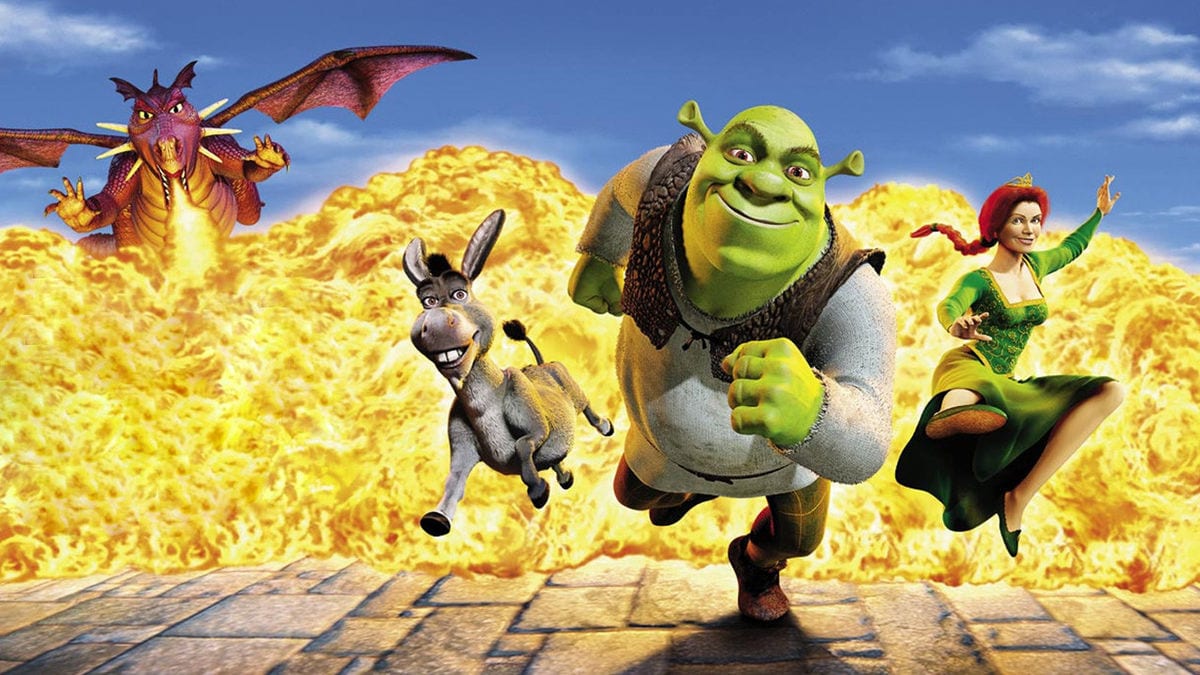 Today I’d like to look at one of the most influential animated movies of all time, the original Shrek. Shrek’s popularity spawned a movie franchise, TV specials, video games, toys, and even an entire sub-genre of imitators. However, the movie’s success wasn’t a foregone conclusion. Before Shrek was DreamWorks Animation’s flagship franchise, it was seen as a “Gulag” to which animators were banished if they failed on The Prince of Egypt. Shrek was a risky project at the time, and no one at the studio really knew what to do with Jeffrey Katzenberg’s request that the movie be “edgy.” However, I’d like to back up even more for some context. I talked in my Antz review about the fallout at Disney in the 90s. Basically, Katzenberg felt like he had saved the animation studio, which wasn’t strictly wrong. However, credit belonged to more than one man. Regardless, when Katzenberg was chairman of the Walt Disney Studios, their animated films’ quality and success did a 180. Under these circumstances, when then-Disney president Frank Wells tragically died in a helicopter accident, Katzenberg saw his opportunity to seize power. However, CEO Michael Eisner and Walt’s nephew Roy didn’t agree to promote him. He ultimately left to form DreamWorks SKG with David Geffen and Steven Spielberg. This experience left Katzenberg feeling bitter and betrayed, which undoubtedly fueled his desire to both rip Disney off and parody the formula that had saved their animation studio. Movies like Antz and Shark Tale (which I’ll review soon) fall into the former category, whereas Shrek is the poster boy for fairy tale spoofs. Many of these films were produced in the 2000’s (and still to this day), trying to cash in on Shrek’s formula, but rarely to any significant success. Beneath the two decades of pop-culture oversaturation, sequels, spin-offs, and copy cats, I’ve wondered if Shrek really is that great on its own terms? Let’s dive in. 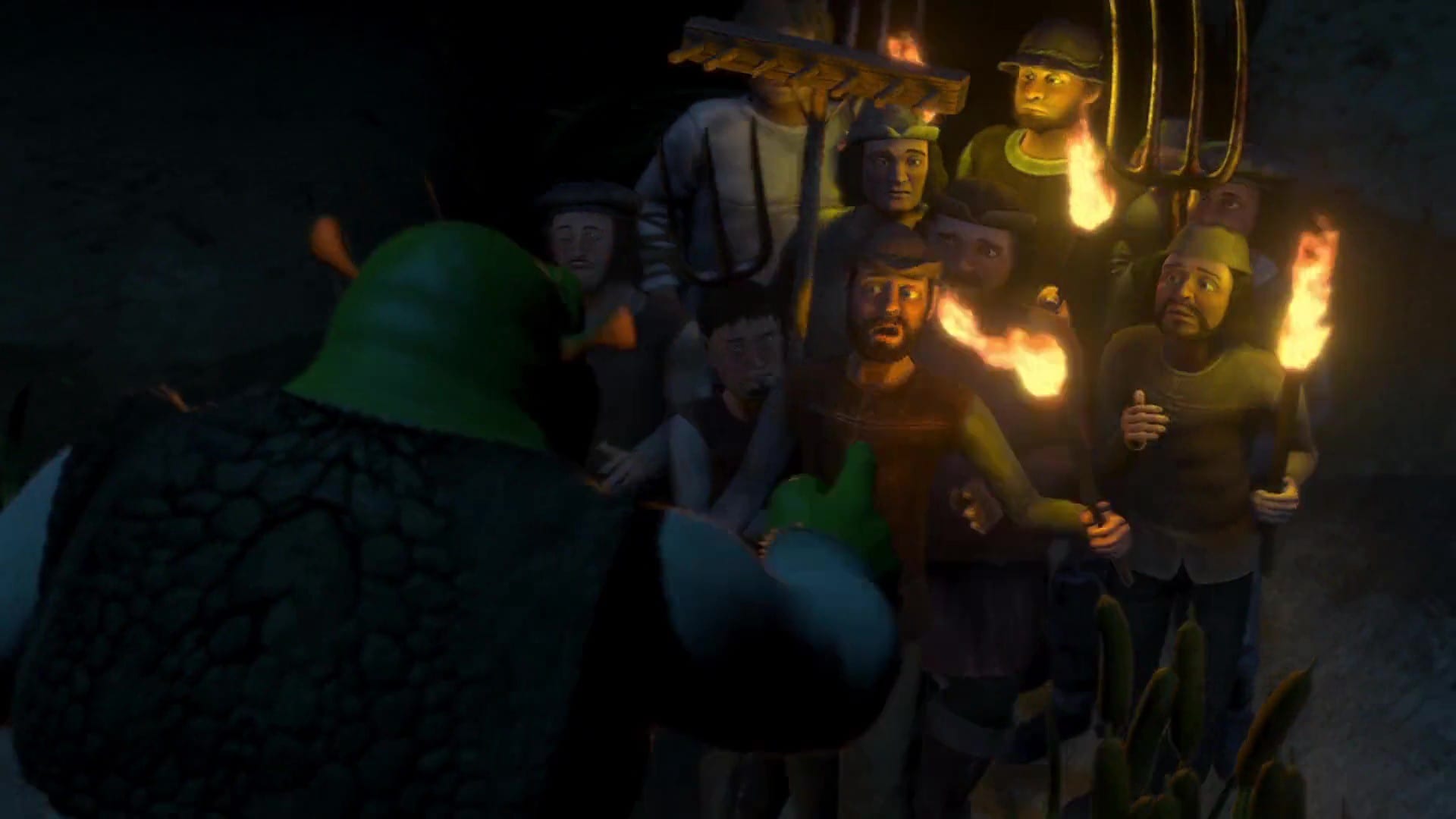 Shrek is based on a children’s book of the same name by William Steig. However, the story isn’t identical to the book. There, Donkey is a minor character, and Shrek goes looking for the princess intentionally after hearing he is destined to marry a princess even uglier than he is. In the movie, Shrek (Mike Myers) is a lonely ogre who doesn’t actually want to be alone. He’s been rejected by society all his life for being terrifying and ugly, and now he’s just so used to it that he thinks it’s what he wants. When Lord Farquaad of Duloc (totally not a Michael Eisner stand-in, by the way) begins rounding up fairy tale characters and sending them off, Shrek accidentally makes friends with Donkey (Eddie Murphy), who can talk and now won’t leave him alone. Matters worsen significantly when fairy tale creatures of every sort show up on Shrek’s swamp, and he soon learns this was also the work of Lord Farquaad (John Lithgow). After beating his way through Farquaad’s guards, Shrek makes a deal with him. Shrek will rescue the princess Farquaad wants to marry in exchange for getting his swamp back, exactly how it was, with no fairy tale critters or characters. Shrek and Donkey brave a lava moat and a Dragon (who’s a girl and really into Donkey) to save Princess Fiona (Cameron Diaz). While Fiona has been nursing fantasies of being rescued by a handsome prince and finding true love, she proves to be a capable companion. She fights off Robin Hood and his Merry Men, catches some food for the group, and turns out to be just as gross and unorthodox as Shrek. While the two don’t get along at first, they fall in love on the way back to Duloc. However, Fiona has one more hidden characteristic, and she’s not willing to reveal this one so quickly. Can Shrek and Fiona overcome their differences, deal with Farquaad and break a mysterious curse in time? 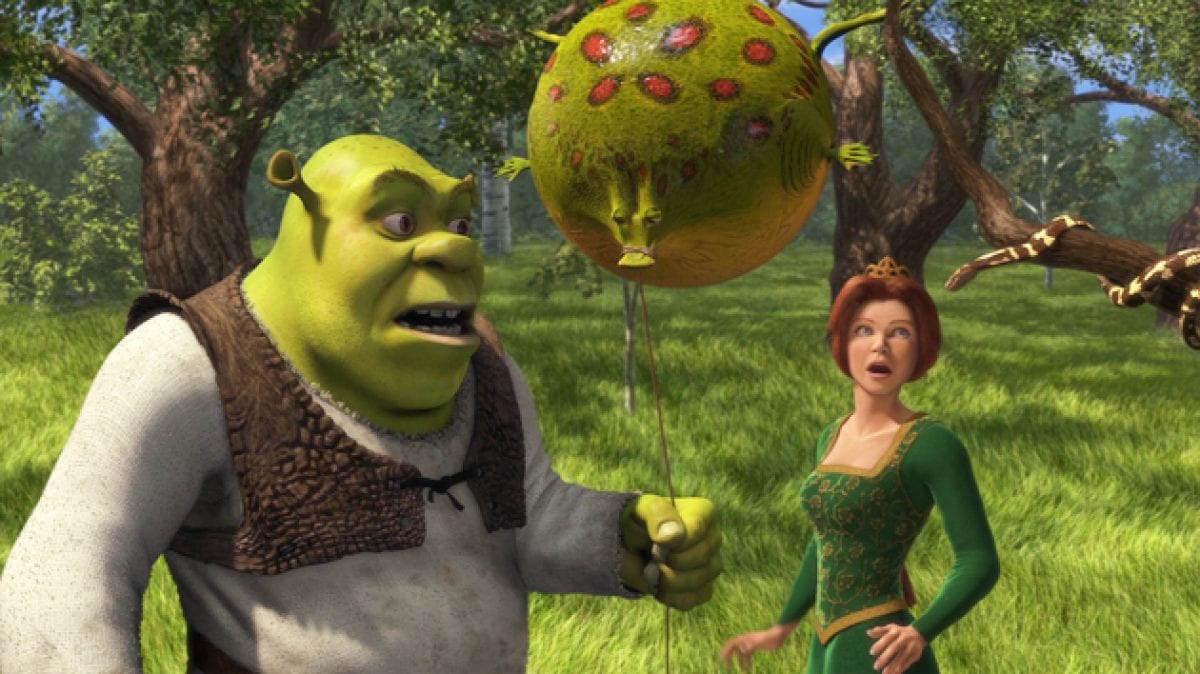 I’ve always been kind of surprised by how much people love Shrek. I don’t think it’s the worst movie ever; it’s not the worst DreamWorks animated movie, or even the worst in the Shrek series. However, I do think it’s wildly overrated. People are looking back on it more in nostalgia than admiration of its achievements. I will say the animation is quite impressive for when the movie came out. For one thing, it looks nothing like other CGI animated films at the time and has a style all its own. Rather than going for the crazy and cartoonish like Monsters, Inc., Shrek goes for a semi-realistic design for its characters, using things like freckles and moles to distinguish them. Things like hair and fabric look pretty good, though not as good as the fur in Monsters, Inc. But in terms of the quality of the design, DreamWorks’ human characters looked better than Pixar’s at the time. I think that’s worth mentioning. The original music by John Powell and Harry Gregson-Williams is also excellent. I love both of these composers, and they would go on to do even better work with DreamWorks and elsewhere. The two also teamed on The Road to El Dorado (God-tier soundtrack) and the Kung Fu Panda and How to Train Your Dragon franchises. They both deserve more credit than they tend to get, especially Powell, who’s one of my favorite movie composers of all time; put him next to Hans Zimmer, John Williams, and Howard Shore, where he belongs. But composers of animated films usually get shafted, especially if the film isn’t a musical. 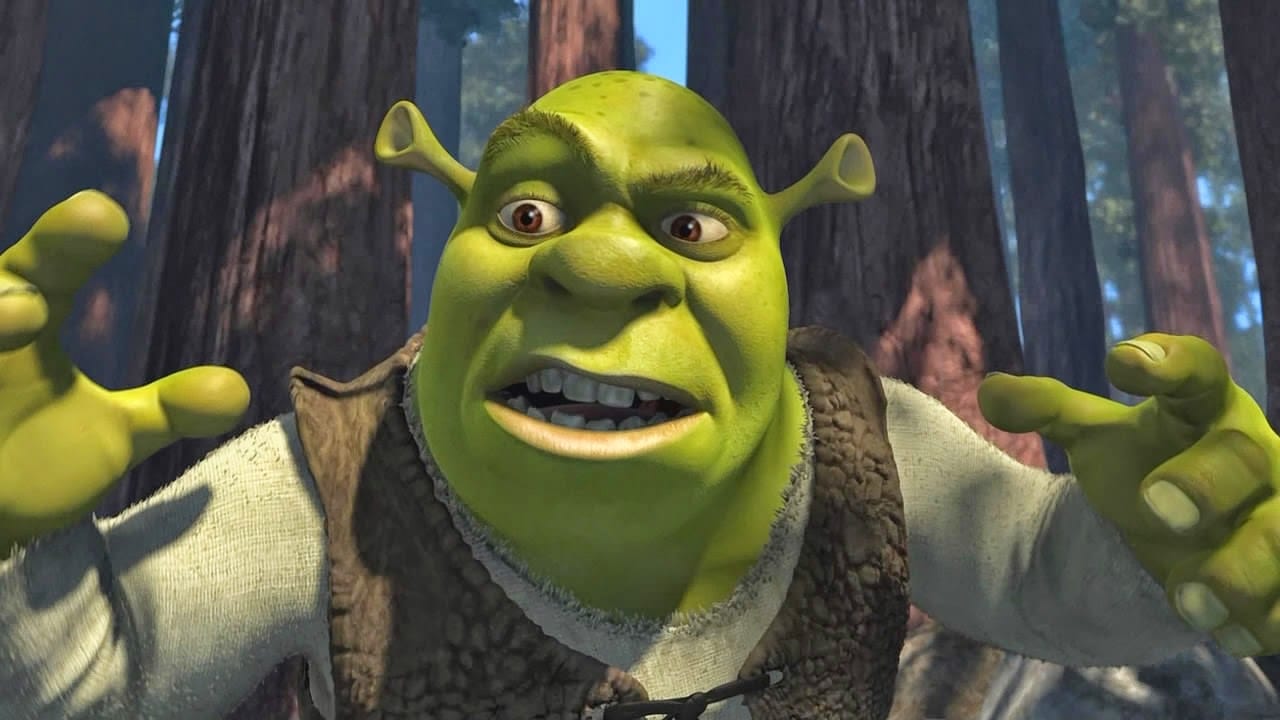 Some of the vocal performances in Shrek are also very good. I especially like John Lithgow, who should be in more things. The condescending tone he addresses people with is funny. I like how the film hints that he doesn’t actually know anything, despite being in charge of an entire kingdom. This is also my personal favorite performance for Cameron Diaz, who usually seems like she’s just phoning it in. I tend to forget how good Mike Myers actually is in this movie. His schtick with this role is tired by now, and it seems like a joke in and of itself. But his line delivery is solid in the first Shrek. He hits the right emotions and always sounds genuine, even when what he’s saying is ridiculous or horribly cruel. I also really like the “Hallelujah” scene. I actually prefer John Cale’s cover of the classic song, and even the one Rufus Wainright recorded for the movie’s soundtrack album, to the original. It has more of a tune and is one of few times the film actually emotionally resonated with me. It’s not just the song and its perfect lyrics, either. Shrek’s home’s dim lighting contrasts perfectly with the ethereal appearance of Fiona’s wedding dress in the light from the castle’s stained-glass windows. The way he sits at one side of his table while she sits at the opposite of Farquaad’s table, both alone, as the camera pans. This is just a brilliantly constructed scene and my favorite in the film. I’m reminded of something that was said about Frozen when it came out, that it was really just a movie about lonely people. Every central character in Shrek is lonely, and the movie is about them coming together as a make-shift family. I also like the film’s overall message that Fiona doesn’t have to be conventionally beautiful to be loved. The film subverts the ending of Beauty and the Beast, and I only wish they had done it in more of their own way, but Katzenberg was out for revenge, so even scenes that are supposed to be wholesome need to mock something, right? Right? 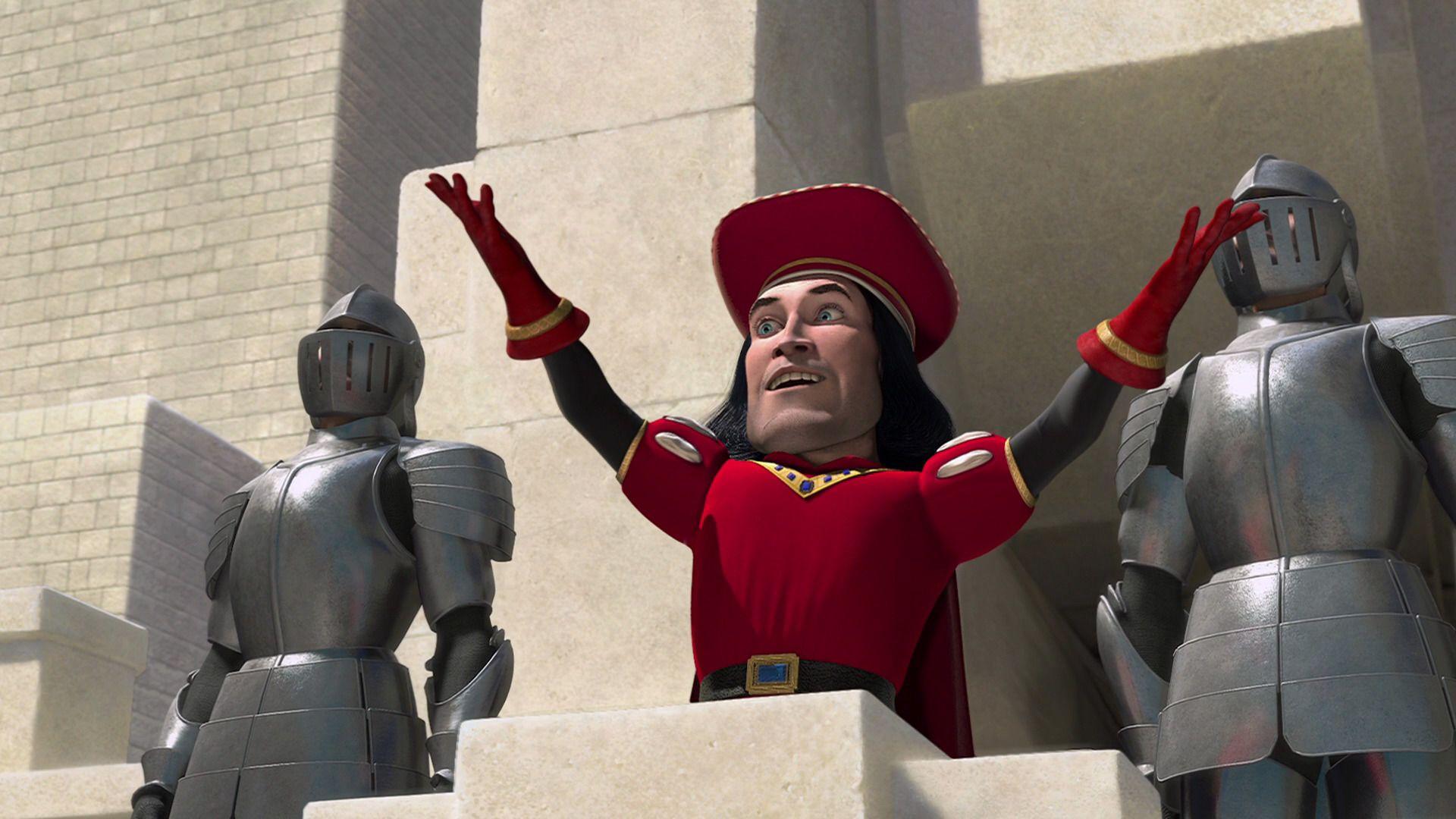 This is where a lot of my problems come in. Shrek is a parody of fairy tale films, and I have no problem with that. But in light of Katzenburg’s quest for revenge, many of the film’s creative choices were made specifically to spite Disney and what they had done through their renaissance. I don’t like this reactionary way of making movies. I’m sure it’s one of the biggest reasons the film succeeded, since people were probably tired of watching the same types of movies for a decade. But it’s interesting to me that when Disney got experimental and made unique movies that didn’t rely on their formula, those flopped while movies like Shrek soared. Shrek is mean-spirited, and I don’t like it. Rather than focusing on its own characters and narrative, it has to fit in as many jabs at Disney and traditional fairy tales as possible. It’s even mean to its own characters and even random animals in the film. Shrek‘s comedy relies on cruelty and gross-out humor, and I have to be honest and say that neither one really works for me. I also think Eddie Murphy is just too much as Donkey. It’s easy to see why Shrek gets frustrated with him; even watching the movie, I actively wished he’d stop for a while. It’s weird because he’s usually right about how Shrek and Fiona need to be honest and let one another in. But he’s on a 10, and I need him on like a 6 to tolerate him. I’m always surprised by people who like Eddie Murphy as Donkey but complain about Mushu in Mulan, who isn’t this annoying and dumb. The attempts to make Shrek adult by having sexual innuendos and characters saying “damn” also fall flat. Personally, while I’m not against adult humor, that isn’t really what makes something mature in my eyes. Exploring real-life, complex issues does. 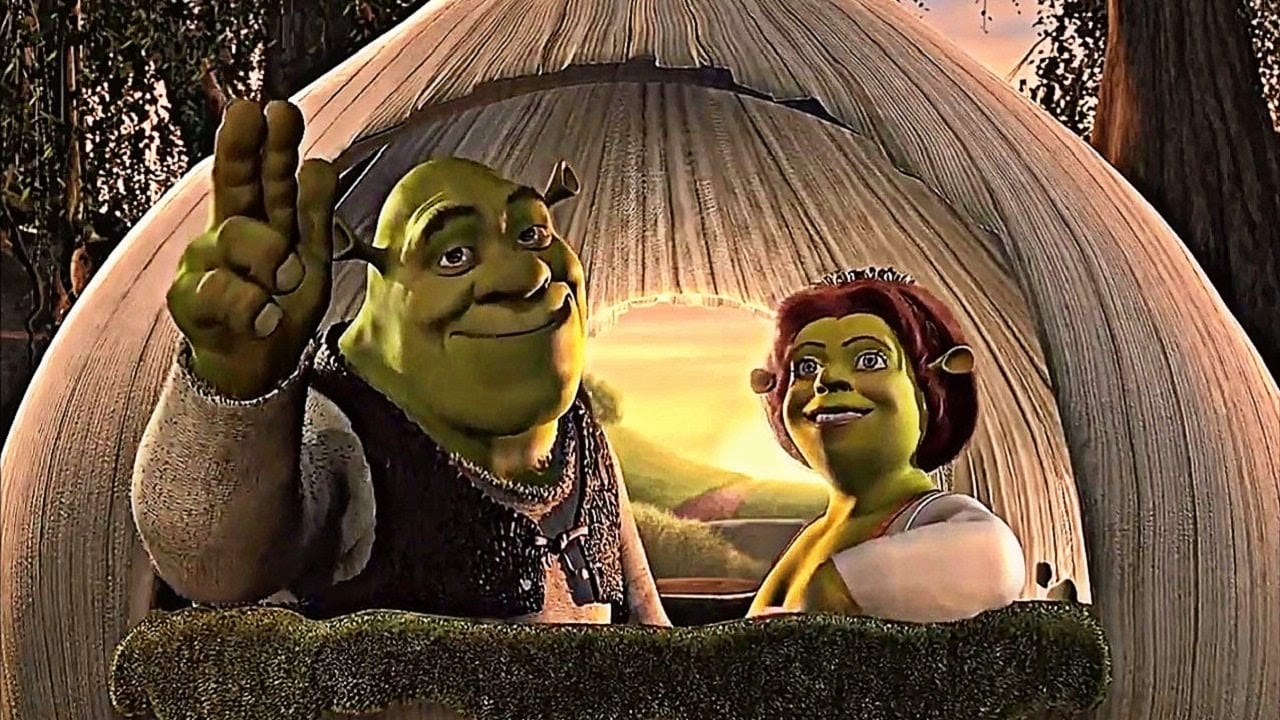 While nothing in this movie really gets there for me, Shrek’s fear of rejection is actually closer to something I would consider “good for adults too.” This is one of the most famous movies of the 21st century, so I’m in the minority on that. I also have problems with Farquaad. As I said, John Lithgow is hilarious as him, and he is not the problem. But they spend this entire movie-making jokes about how short he is, and it isn’t funny. I’m not saying it’s offensive or hateful to little people (although I’d be interested in hearing what they think or if they even care about it), just that it isn’t funny at all. The first time it was revealed that he was that short, I guess it was an okay visual gag, although you could tell by the size of his shoulders, so it’s not as much of a reveal as they thought. But they seriously drag this joke kicking and screaming through an entire 90-minute movie. Why? Did they really think it was that witty or knee-slapping funny? Okay, he’s short! We get it!

Overall, Shrek is okay. I can see why it was such a huge success, but that doesn’t necessarily mean it deserves it. The animation was revolutionary at the time, and the musical score and some of the performances are outstanding. But Eddie Murphy is too much, the comedy is lowbrow, and this film is obsessed with Disney (though it handles this better than some similar films). My favorite fairy tale parody is actually 2005’s Hoodwinked! And my favorite DreamWorks movie of all time is The Prince of Egypt. However, even after Shrek, the studio would continue to excel with bigger and better films, even within the Shrek series. I don’t hate Shrek, but I don’t really like it either. It’s just this cultural colossus that I think is… fine.

Can understand that, I don’t know why it became such a phenomenon, but for me I love it still it, too much nostalgia in it for me.

That’s understandable. Glad you enjoy the movie and thanks for reading!

Of course, and thanks for the review.