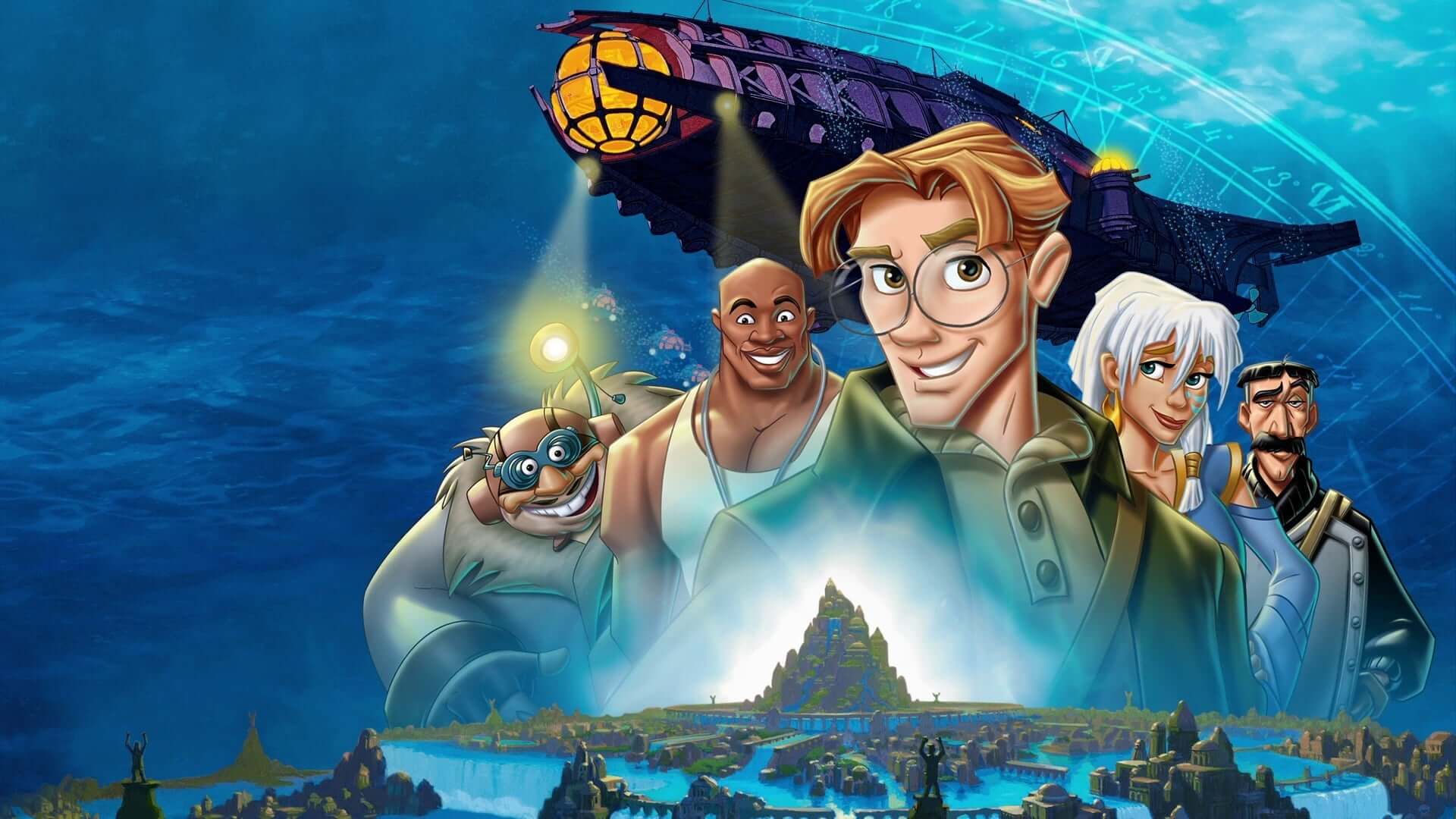 “Our people live but our culture is dying.”

In the early 2000’s Disney was intent on experimentation. The studio had produced a slew of hits in the early 90’s, but throughout the decade their success slowed and the output needed to adjust accordingly. Rather than cling to the formula that gave them The Little Mermaid and Beauty and the Beast, the studio went hard in the opposite direction with Atlantis: The Lost Empire. Critically and financially speaking, the result was actually quite a bit worse than any of the relative disappointments of the late 90’s.

Atlantis: The Lost Empire tells the story of linguist-cartographer Milo James Thatch, a young man instilled by his grandfather with a belief in the lost city of Atlantis. Nobody believes Milo and his employers simply shake their heads at his proposals and try to avoid him. An eccentric friend of Milo’s grandfather also believes in Atlantis, though, and has the means to send Milo in search of the fabled city. Milo is joined by a colorful cast of characters from all walks of life, and together they’re on the adventure of a lifetime. They encounter danger, mystery and the one thing none of them expected — a civilization alive in the city.

This movie is absolutely gorgeous. The colors are vibrant, the designs are creative and the city itself feels like something entirely new, as it should. The music is honestly beyond words. The score by James Newton Howard is beautiful, grand and always appropriate for whatever scene it’s complimenting. They also assembled quite an interesting cast, comprised of both Hollywood veterans and professional voice actors. In the former camp you have the likes of Leonard Nimoy, James Garner and Michael J. Fox. Corey Burton, Phil Morris Jim Cummings and Cree Summer represent the latter designation. Jim Varney and David Ogden Stiers are, of course, known for both. I really like the characters; Milo is an unconventional protagonist for Disney, and the supporting players are absolutely hilarious. I really love their backstories and designs. Kida is beautiful and unique. She reminds me of Pocahontas if Pocahontas was a dynamic character or actually did anything.

While the technical aspects of Atlantis: The Lost Empire are beyond reproach, I don’t think it’s perfect. This film is too short and the pacing is too quick; it feels unnatural at times. Once the film has introduced a new character or location, it’s time for the next scene and we don’t really get to experience any of it. A lot of interesting concepts are introduced, but not explored. For example, Kida says her people are alive but not thriving, but the movie doesn’t really explain this any further. I think my issues are connected to the reasons it didn’t make money, too. This was Disney’s attempt at a grand action-adventure, but in some ways it was still hindered by the Disney label. Atlantis: The Lost Empire is right at 95 minutes long, the perfect length for a family film but too short for a big summer blockbuster. The film has death and violence in it, but it’s watered-down enough to maintain a PG rating.

The short runtime means the characters don’t have time to develop interesting relationships, the culture of Atlantis is barely touched upon and the climax feels extremely rushed. The heart of this film should have been the relationships between Milo and Kida, and Kida and her father. The moments where Milo mentions his grandfather are sweet but too brief; all we really know is that he loves him and idolizes him. You could make the argument that Kida and Milo are just taking it slow compared to other Disney couples, but there’s honestly nothing in the film to indicate that they are more than friends until the very end. Something similar was done with Mulan and Shang, but they had a friendship and camaraderie throughout the film before their implied coupling. In Atlantis: The Lost Empire, Milo looks at Kida longingly a couple of times, but their conversations are all about Atlantis, not themselves or each other. What do they even know about each other? We only get one significant scene with Kida and the King, and again, it’s all about the people and the city. We don’t get to know much about them as a family. I actually really like most of the characters, but the film just doesn’t give us time to learn enough about them.

Kida is also remarkably quick to forgive Milo and the entire crew for showing up and trying to steal the Heart of Atlantis. We as the viewer know this was not Milo’s intent, but wouldn’t anyone in Kida’s position feel betrayed and confused? This brings us to another flaw in the movie: the villain. Rourke is easily the film’s least interesting character. His reveal as the villain is framed as some kind of plot twist, but it’s pretty obvious from the get-go what his intentions are. James Garner does a fine job providing the character’s voice, but they don’t give him anything all that interesting to say. Another Disney villain who’s just out to make a buck; huge shock there.

In fact, although I do like the supporting characters, their involvement confuses me. They’re willing to steal these people’s life force even once they know there are, in fact, people there, but Milo crying over a photo of his grandfather is enough to persuade them otherwise? This is really weird. I feel like they were trying to make the film morally complex but it just doesn’t make sense. If they’re good people, they wouldn’t even consider doing this; if they cared enough about money to go through with it, I don’t think seeing a single man upset about it would be enough to change all of their minds. I think this was another casualty of the short runtime; the filmmakers needed to reveal these characters as antagonistic, then have them all turn coat, and there simply wasn’t time for a satisfactory explanation.

Atlantis: The Lost Empire was a childhood favorite of mine and I still really like it. As I mentioned in my piece about Disney remakes, I think with a bit of tweaking Disney could have something great on their hands. As is, I enjoy most of the characters, there are some funny bits of dialogue and the film’s production design is reason enough to give it a watch. I’d say Atlantis: The Lost Empire isn’t a perfect film, but it’s a lot of fun and I’d definitely recommend giving it a look on Netflix.

Atlantis: The Lost Empire was a childhood favorite of mine and I still really like it. As I mentioned in my piece about Disney remakes, I think with a bit of tweaking Disney could have something great on their hands. As is, I enjoy most of the characters, there are some funny bits of dialogue and the film’s production design is reason enough to give it a watch.