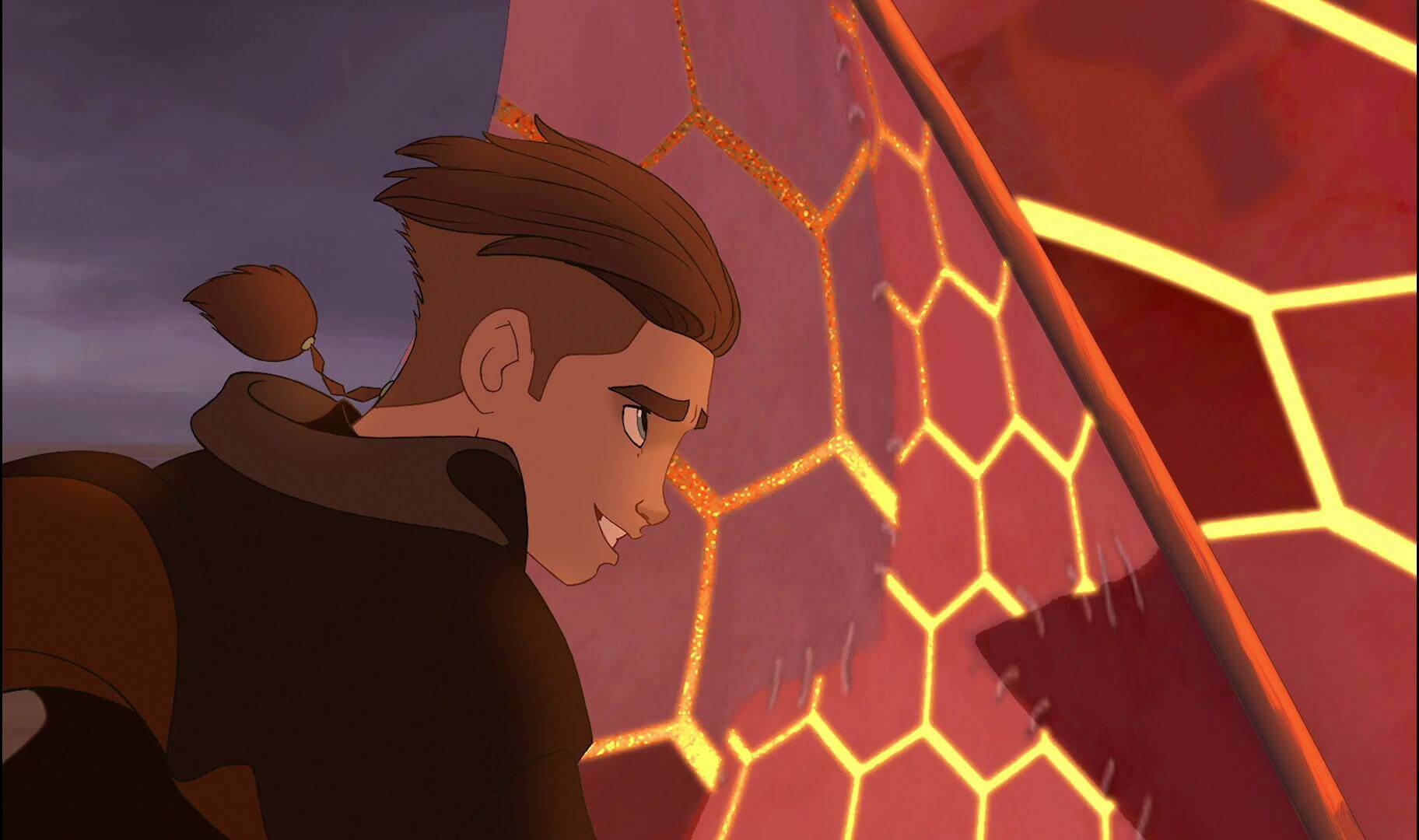 “You’re something special, Jim. You’re going to rattle the stars you are.”

When directors John Musker and Ron Clements pitched Disney’s The Little Mermaid to the company’s executives, they also pitched a movie called Treasure Island in Space. Then-chief of Walt Disney Studios Jeffrey Katzenberg just wasn’t interested in the idea, according to Clements. The pair continued to mention the film during their pitches over the next decade and finally only agreed to make Hercules if they could make their movie, now titled Treasure Planet, next. It ended up being a good thing the film was delayed, as Musker and Clements wanted a range of movement of the camera that wouldn’t have been possible in the late 80’s. Treasure Planet employs traditional animation, flat-render CGI and the deep canvas technology that was created for Tarzan three years earlier; sometimes all three appear on screen at the same time, making for a complex composition and a unique viewing experience. Critical reviews were mixed and the movie is considered one of the most expensive Hollywood flops of all time, but it has found a small following on the internet over time. 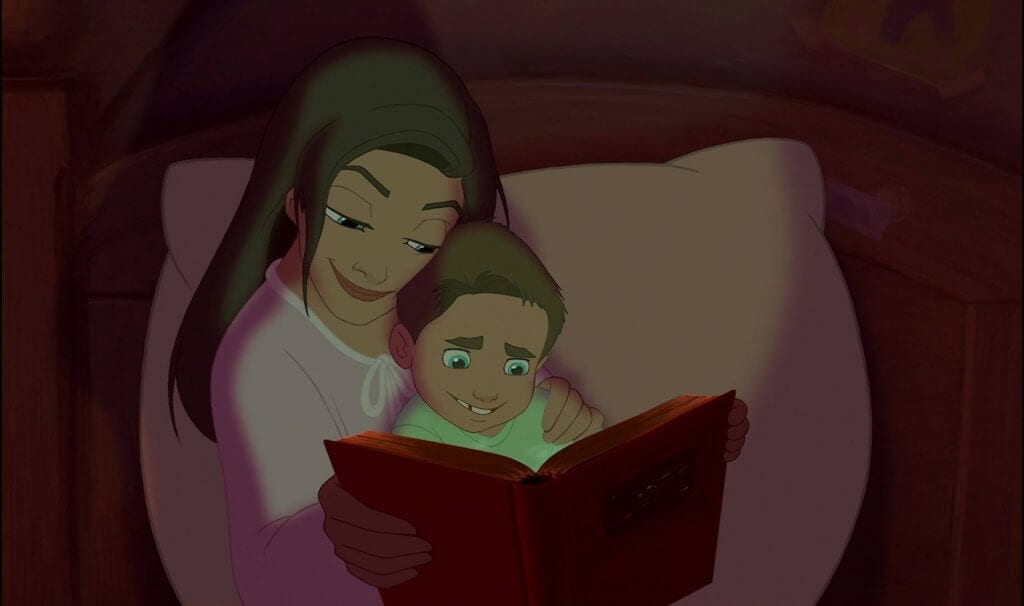 Treasure Planet is an update of Robert Louis Stevenson’s classic novel Treasure Island, about a young boy named Jim Hawkins who goes on a pirate ship in search of the eponymous island. However, this film has a twist: it is set in space and has a steampunk look to it. The movie begins with a very young Jim reading a book about pirate Captain Flint and Treasure Planet, the loot of a thousand worlds. His mother tells him that the planet is just a legend, but Jim is convinced he’ll find it someday. Flash forward to Jim as a troubled teenager, a constant source of worry for Sarah, his mother and owner of the Benbow Inn. An alien named Billy Bones arrives on their doorstep and Jim helps him into the Inn, inadvertently attracting cyborg-pirate John Silver and his crew, who destroy Sarah’s Inn in a failed attempt to obtain Billy’s spherical map to Treasure Planet. Sarah’s friend Doppler pleads with her to let him take Jim on a search for the planet, and she agrees in the belief that it will be good for him. On their journey, Jim and Delbert hire the capable Captain Amelia and, unwittingly, a crew of pirates — the very same that destroyed the Benbow. While most of the pirates are antagonistic, Jim forms a bond with Silver and grows to see him as a surrogate father, even telling him about his own father who abandoned him and Sarah. Matters are further complicated when Silver reveals his true colors, turning on Jim and his friends in a bid to obtain his map. They all end up on Treasure Planet only to find that Flint booby-trapped it, and when presented with the treasure, Silver instead chooses to save Jim’s life and they all escape. Jim helps Silver sneak away to avoid punishment, and returns to his mother a changed man.

This film continued Disney’s post-Renaissance trend of sci-fi films bereft of musical numbers and daydreaming princesses. I enjoy all of these movies and appreciate the variety in Disney’s canon, and personally, Treasure Planet is my favorite Disney film from the 2000’s. The animation is amazing; it was very expensive to produce at the time, and you can see why. The film’s ships are rendered with the deep canvas software Disney developed to animate the jungle in Tarzan. Silver is mostly traditionally animated, but his mechanical eye and arm are CGI rendered, and the overall effect looks amazing. He was animated by veteran Disney artist Glen Keane, who had already been lead animator on several of Disney’s most iconic characters. In the 1990s Disney mixed CG into their traditionally animated films a lot, but with Treasure Planet they finally reached a point where it didn’t stick out like a sore thumb. A trained eye can spot the use of computer graphics, but it doesn’t look like out of place, like, say, the lava as Aladdin is leaving the Cave of Wonders. Interestingly, the traditional animation in Treasure Planet is inspired by 19th century oil paintings. The film has a very warm look to it, and you just feel like a kid again as you watch this adventure unfold.

The musical score by (again) James Newton Howard is beautiful and always perfectly complements what we see on screen. The film has two original songs, “I’m Still Here (Jim’s theme)” by John Rzeznik and “Always Know Where You Are” by BBMak. “I’m Still Here” is the better of the two, communicating Jim’s frustration at the way people see him, and his father abandoning him. “Always Know Where You Are” plays at the very end of the film and has a more triumphant tone as Jim is a successful military cadet thanks to a recommendation from Captain Amelia, the Benbow has been rebuilt and Amelia and Doppler have had children. I like this song too, but the former feels more defining to the film and is more emotionally complex by nature. 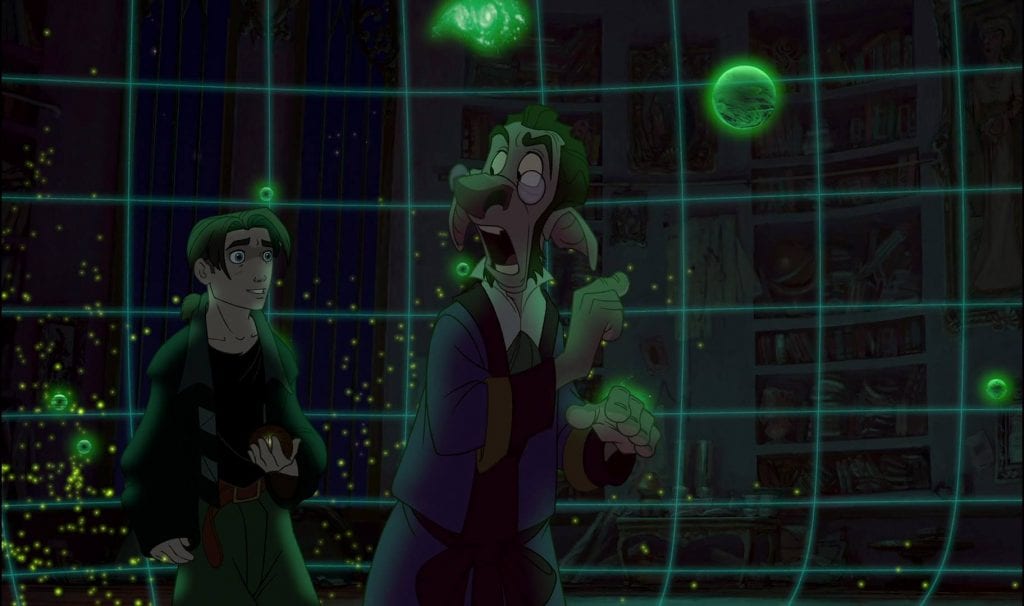 This film succeeds in delivering plenty of action and science fiction staples, like Atlantis before it, but unlike that film Treasure Planet has a strong focus on the characters, mainly Jim and Silver. This has got to be one of the most complex relationships in any Disney film, if not the most. Silver is really not a good person; he’s a plundering pirate who will kill — and has killed — people to find his treasure. The filmmakers pull the old trick of having Jim hear Silver say he doesn’t really care about him so that the crew doesn’t think he’s gone soft, and this forms a rift in the relationship even when Silver insists it isn’t true. I really dislike this trope and it feels like a lazy way to create conflict, but nonetheless it is hard for Jim to trust someone like Silver, especially after his trust in his own father was betrayed. Silver ultimately chooses Jim’s wellbeing over his own potential wealth, saying that the treasure was “just a lifelong obsession, Jimbo. I’ll get over it”. Although Silver doesn’t always do the right thing, he does teach Jim several valuable skills, like tying a strong knot and lessons about hard work. Their friendship ultimately shaped Jim and sets him on the right path. I also really enjoy Sarah Hawkins, Doppler and Captain Amelia. The latter two couple up and, in another twist on the Disney formula, the side characters provide the only romance in the film. With Jim the focus is entirely on his relationship to Silver and his character arc. This is in keeping with Stevenson’s original intention that women be excluded, although this is bent a little with the focus on Sarah and the presence of a female captain. Another interesting subversion of the Disney formula lies in that, while Jim’s father is gone, he didn’t die. Both of his parents are alive; his father is just a jerk who doesn’t care enough about his own family to stick around.

It seems like the under-appreciated Disney films always have the best vocal performances. There isn’t a single weak link in Treasure Planet, but Joseph Gordon-Levitt absolutely shines as Jim from start to finish. You can hear his frustration, excitement, anger and a wide array of other emotions coming out in full force. This coupled with James Baker’s animation produces one of the most realistic Disney animated characters to date. Jim seems like a real teenager, and his problems are tangible. You know he feels bad for causing his mom so much grief, but he just doesn’t know how to do any better right now. Brian Murray voices John Silver, and this is another great one. Silver has a lot of complex emotions and muddled motivations to get across, and actor and animator fuse to create a great character that feels truly original, regardless of being based on the one in the book. David Hyde Pierce and Emma Thompson are funny and lovable as Doppler and Amelia, and Laurie Metcalf does her usual mom schtick. Seriously, this woman has played a lot of animated moms.

I do have some gripes with Treasure Planet, and one is the character of B.E.N., or Bio-Electronic Navigator. Martin Short does a fine job in the role, and the design isn’t bad, but this character is just annoying, and intentionally so. He even poses a detriment to the mission, and nearly gets Jim killed on more than one occasion. I suppose it’s a moot point to complain about a character like this, but why does there have to be an annoying sidekick that everyone tolerates for some unfathomable reason? It reminds me of Gurgi from The Black Cauldron; he serves the story one time, and other than that he’s just obnoxious. 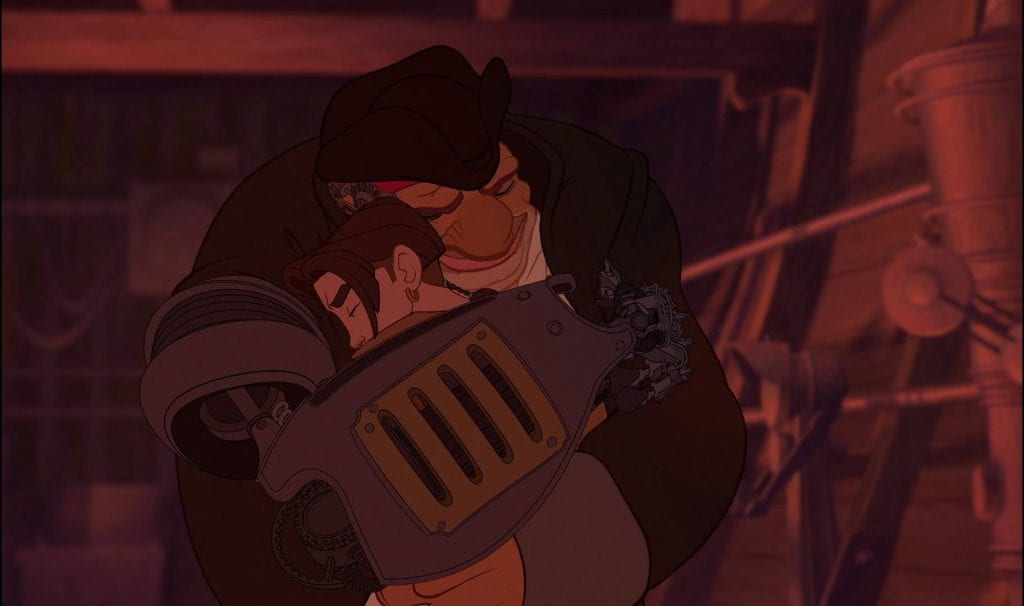 In fact, my issue with B.E.N. highlights a larger problem with the film: the first two-thirds are absolutely on fire, and if anything go by too fast, but once they reach Treasure Planet, which should be the highlight of the film, it feels like the momentum just dies. I also take issue with some of the film’s comedic moments, such as the “Flatula” alien Doppler briefly speaks to. If they’re going for a more adult action-adventure feel, why did they include such unnecessary potty humor? The Robo-cops who bring Jim home near the beginning are also annoying and not very funny. And, while Treasure Planet does offer the Etherium as a means of breathing in space, they don’t explain how Jim can access the map if nobody else can. Similarly, Mr. Scroop frames Jim for the murder of Mr. Arrow and this is never acknowledged again. They make reference to Arrow’s death, but nobody — including Jim — ever addresses the fact that it is (or isn’t) his fault. More on the side of what ifs, I would have liked to see more locales in this universe and more of the friendship between Sarah and Delbert.

Regardless of its flaws, Treasure Planet is one of my personal favorites. I love a film that can produce strong emotion and exciting action sequences. This film really has almost everything I could ask for: great characters, interesting relationships, beautiful music and mind-blowing animation. I wish it had been a bigger success at the time, as the studio was initially planning a sequel and I’d love to have seen that. Like Atlantis, I would surmise that Treasure Planet wasn’t a big hit because Disney was trying too hard to appeal to two different markets: the usual Disney crowd and moviegoing teenagers. But I’m glad it has found some appreciation on the internet in our digital age; like Jim, maybe people are starting to see the value in this flawed but well-meaning film.

Regardless of its flaws, Treasure Planet is one of my personal favorites. I love a film that can produce strong emotion and exciting action sequences. This film really has almost everything I could ask for: great characters, interesting relationships, beautiful music and mind-blowing animation.

Did you know that Silver is actually an alien? It’s ursine-like. I learned that some time ago. Would explain his clawed hand you know. Kind of gives out a nod to one of Glen Keane’s first assignments in animating the bear in Fox and the Hound. Some of the visuals, especially Jim’s flight in the beginning remind me of Rescuers Down Under.

That makes sense, his nose is kind of weird looking too. Thanks for the fun fact!