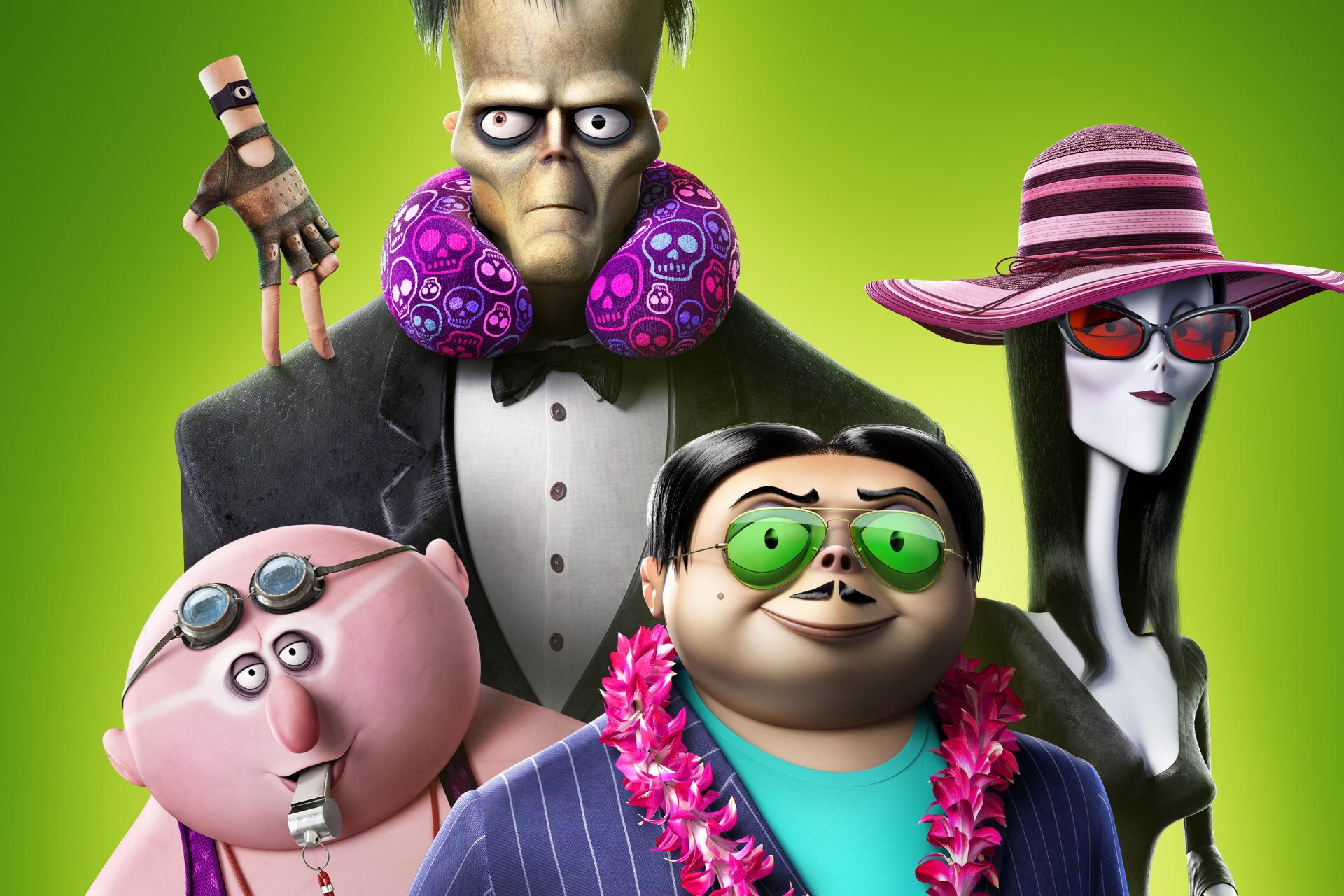 I was unsurprised when a sequel to 2019’s The Addams Family was announced. Thanks to an impressive cast and decent comedic elements, that film was surprisingly pretty good. The actors did a lot to elevate the material, building believable repartee and family relationships. The Addams Family was also packed with references to its earlier iterations and enough charm to overpower the mediocre animation and obnoxious pop soundtrack. I haven’t been dying to see The Addams Family 2, but it became something to casually look forward to. Let’s see how it holds up to its predecessor.

The Addams Family 2 keeps the focus on Wednesday as she competes in the school science fair. Her experiment involves the exchange of traits, and the subject is Uncle Fester. She successfully imbues Fester with her octopus Socrates’ intelligence, but with some unanticipated side effects. Everyone wins the science fair just for trying, which frustrates Wednesday. Wednesday’s standoffishness towards her family motivates Gomez to plan a family vacation across the country. Problems arise as a lawyer shows up claiming that Wednesday isn’t an Addams by blood. He follows them on their vacation, trying to snatch the girl for his employer. When Wednesday is faced with a startling possibility, she must choose between her family and her destiny.

The animation in The Addams Family 2 is the same as its predecessor. It’s only been two years since the first one was released, but animation makes considerable technological strides yearly. Since the first movie did well enough to greenlight a sequel, I had hoped it would justify a budget increase. However, the textures are still flat, and movements are sometimes unnatural. I wasn’t expecting a jump from the first film’s visuals to Pixar quality, but an effort at improvement would have been welcome. The musical score from Jeff and Mychael Danna (The Good Dinosaur, Onward) is still serviceable but nothing special. Unfortunately, The Addams Family 2 goes overboard on pop songs in the background. This was a flaw in the first movie, but they go all-in here, seemingly relying on the songs to create a tone for the film. I don’t know why so many recent movies have been stuffed with overplayed pop songs. Just because it worked in Guardians of the Galaxy doesn’t mean this should be your go-to when seeking an atmosphere for your movie. If you need a song in nearly every scene and your movie isn’t a musical, maybe there’s a bigger problem that needs to be addressed.

There’s a joke where a character bursts into song, and it’s uncomfortable. My theater was packed, and only a couple of kids laughed at this forced display. I think it is a funny concept in context and could have been done well. But the entire scene, replete with dancing bar patrons, is just awkward and provokes more concern for the movie’s screenwriters than laughter. This is particularly disappointing because I thought the first movie’s comedy was one of its saving graces. I was forgiving toward the unimpressive animation and bizarre character designs because the movie was funny and handled its characters well. But in The Addams Family 2, most of the jokes fall flat. I remember laughing exactly once and spent the rest of the film cringing or rolling my eyes.

I watch a lot of movies meant for kids, so it’s not that this kind of film isn’t for me. On the contrary, animated family fare makes up a lot of my favorite stuff to watch. I can’t understand the drop in quality of both the film’s jokes and its visual gags from the first one. There are a couple of references to real-world celebrities and even a piece of product placement that felt extremely forced. They weren’t funny at all, so I’m not sure why they were included other than to make the audience go, “Oh yeah, that’s a person/thing that exists.” In fairness, the writers from the first film appear to have been swapped out for new people. Even director Conrad Vernon isn’t a credited writer on this film, which is odd because he was on the first one. 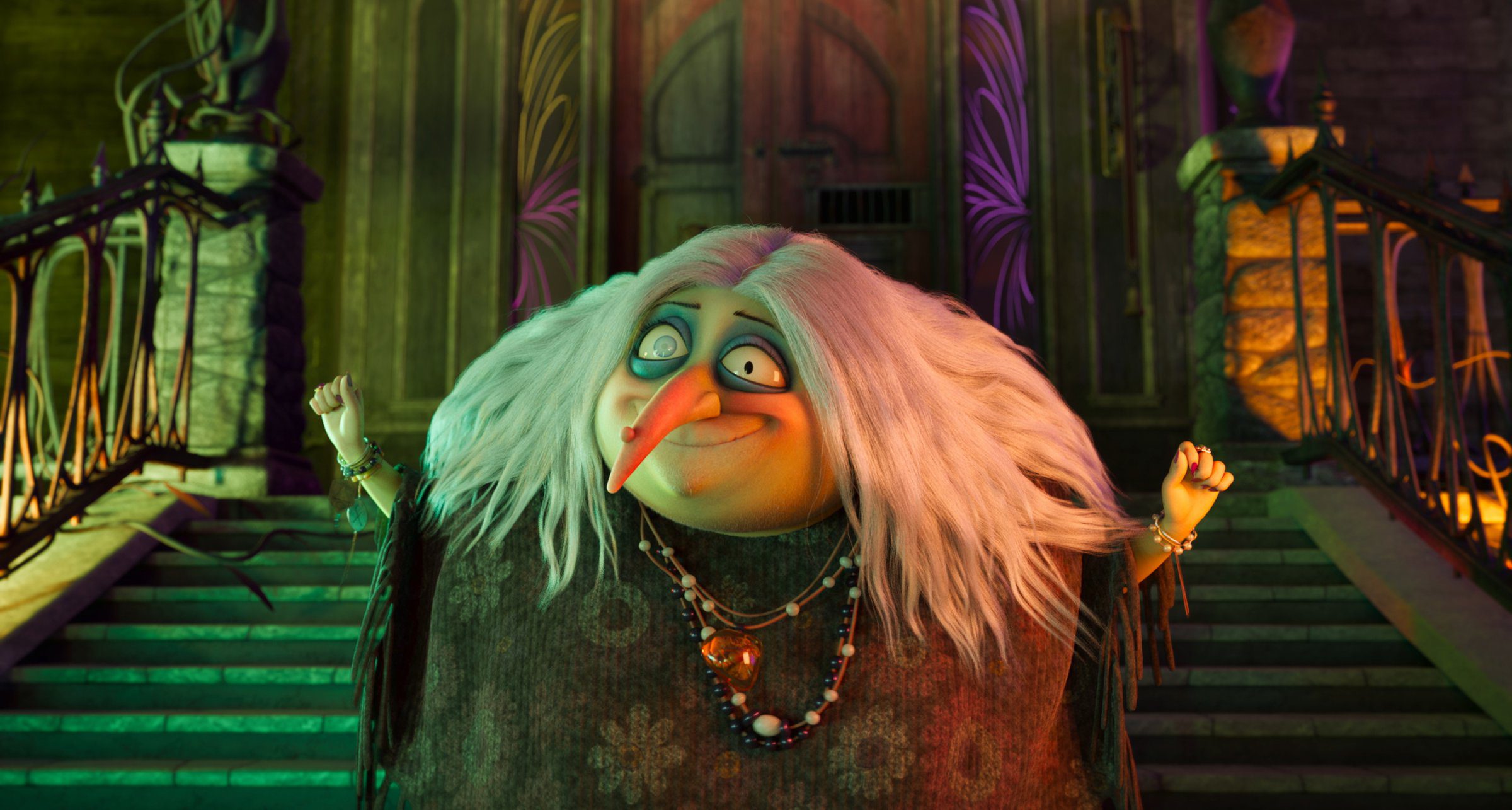 Unfortunately, the humor isn’t the only aspect of The Addams Family 2 that represents a step backward. This film’s villain is nothing compared to Allison Janney’s Margaux from the first movie. Bill Hader gives a decent performance as Cyrus Strange, but this character isn’t threatening, funny, or really entertaining at all. He tries to trick Wednesday into believing something, and it never once fooled me or anyone I saw the movie with. (For reference, two of them are kids.) The movie plays Wednesday’s parentage like some huge, twisty plot when you can tell right off the bat what will happen. Cyrus’ “family” is bizarre in a bad way and adds nothing to the movie. The daughter Ophelia finally gives Pugsley something to do, but at what cost? This is another subplot that isn’t funny, surprising, or much of anything, really. They also immediately make it clear that Cyrus is a villain but still play it like some colossal betrayal when he tells Wednesday his real plan. How dumb do the writers of this film think kids are? Nobody likes being talked down to like this.

The fact that Pugsley is a secondary character in The Addams Family 2 is disappointing. Heck, none of the Addamses have much to do except for Wednesday and Gomez. Even Gomez’s quest to get Wednesday to like him more or whatever is just weird. Wednesday was already the main protagonist in the first movie. Still, I thought they balanced the characters much better there, and Pugsley had his own story going on. The first movie also had the prologue with Gomez and Morticia getting married. I’m not sure why they think every movie needs to be about Wednesday, or why they chose to double down on that in The Addams Family 2. But I think it’s a shame. The quirky personalities of the family and how they bounce off of one another is one of the big draws to this franchise and why it keeps being reimagined. To add insult to injury, they don’t do anything new or exciting with Wednesday, anyway. She learns to be herself… again. This movie has the exact same hamfisted, played-out moral as the first one. Why did they even play out the participation trophy scenario at the science fair? This never comes back or is mentioned again in the movie. The difference is, it lacks the charm, laughs, and winning side characters of the first one. What a waste.

Overall, I wouldn’t recommend The Addams Family 2 unless you’re a massive fan of the franchise or you just have nothing better to do. It’s not funny, interesting, or as creative as the first one. The voice acting is still good, although they recast Pugsley, likely because Finn Wolfhard was busy or due to his age. But the actors can’t make up for a movie that seems to be actively working against them.

The Addams Family 2 is a significant disappointment. The cast is still great, but the comedy, character dynamics, and tone suffer a considerable drop in quality.