"The old ways are done. You can either adapt and survive, or die with the past. The decision is yours." 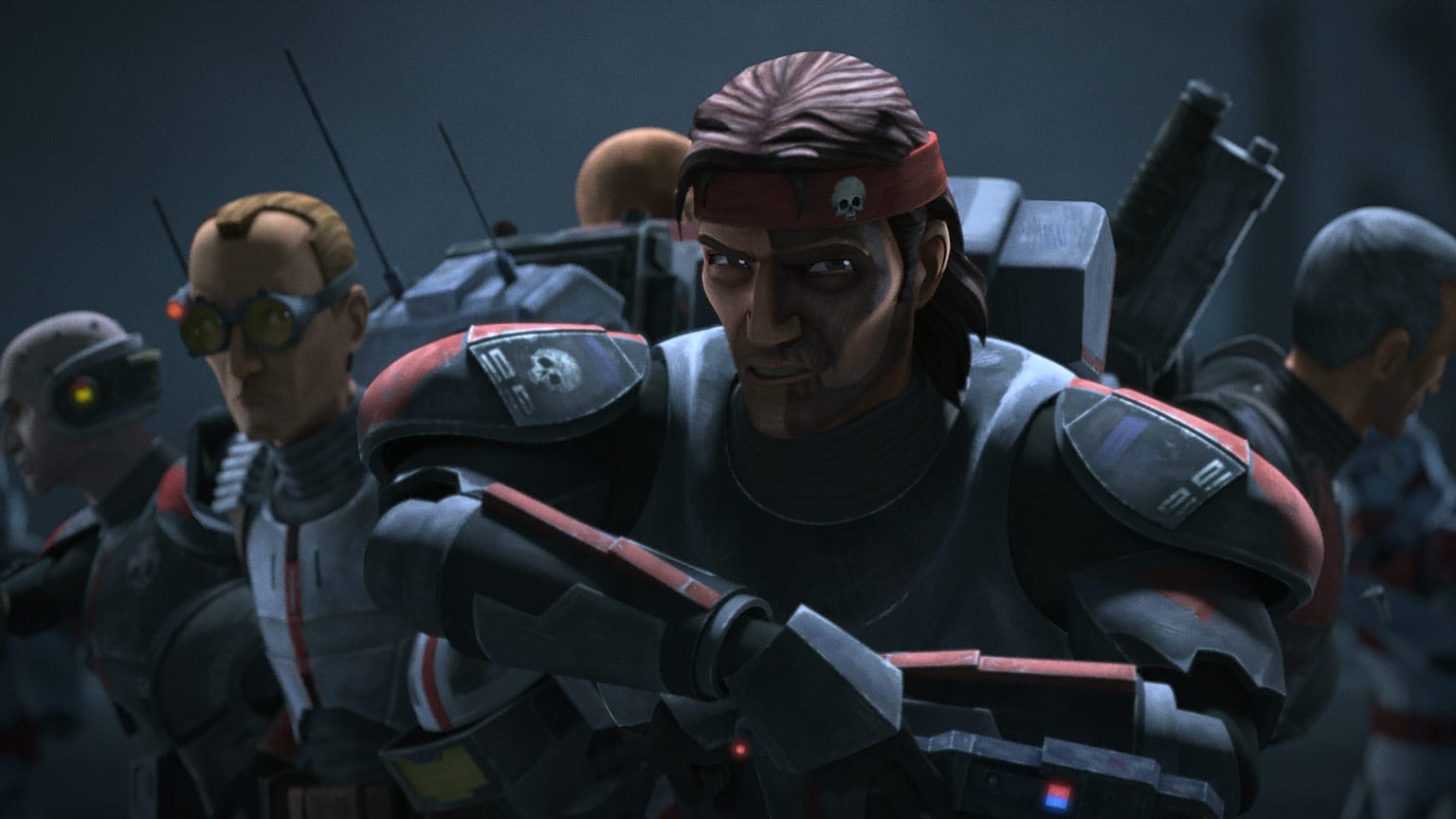 It’s Star Wars Day, which means it’s time for the latest Star Wars animated series to kick off. The Bad Batch was introduced in a 4-episode story arc in season 7 of The Clone Wars. Clone Force 99 consists of four mutated clones with special abilities along with Echo, who joined them in their last appearance. They take their name from 99, a “defective” clone who rallied his brothers to save their home. The Bad Batch, the series, will follow these unconventional heroes as they chart a path for themselves in the aftermath of the Clone Wars. I wasn’t too keen on this show’s pitch at first and wondered why Dave Filoni and co. chose characters introduced in The Clone Wars‘ very last season to star in their own series. However, trailers, posters, and casting announcements have gotten me pretty hyped for this show. I trust Filoni implicitly with regards to Star Wars, particularly of the animated variety. More than anything, I’m pleased to see that the legacy of shows like The Clone Wars and Rebels will be carried on, as opposed to Lucasfilm crapping out another show like Resistance. Let’s dive in.

“Aftermath” opens on the planet Kaller as Jedi Master Depa Billaba and her troops await reinforcements. Her Padawan, Caleb Dume, arrives with Hunter, Crosshair, Echo, Tech, and Wrecker, AKA Clone Force 99, AKA the Bad Batch. As Caleb and his new friends charge forward, Order 66 is issued, and Master Billaba’s clones turn on her. She holds her own at first, but she orders Caleb to run and is soon disarmed and gunned down. The Bad Batch is unaffected by the order, aside from Crosshair, but Caleb runs from them nonetheless. Hunter tries to convince Caleb that he can help him, but Crosshair continues to fire at the boy. Caleb jumps across a canyon and escapes. Hunter says the padawan died in the crossfire, but Crosshair doesn’t buy it. The argument doesn’t last long as the guys are called back to Kamino for assessment. On Kamino, the guys meet a mysterious little girl who idolizes them named Omega. Admiral Tarkin has arrived to evaluate the clones and the needs of the Imperial Army for the Emperor. The Bad Batch beat two training simulations with flying colors. Still, Tarkin remains unsure of their value in light of their deviant behavior and disregard for orders. He reveals to the Kaminoans that Crosshair filed a report claiming Caleb Dume escaped alive, conflicting with what the others said. Tarkin sends the guys to Onderon to end a group of insurgent Separatist droids. However, when they arrive, they find not droids but human civilians, including children, led by Saw Gerrera. Despite Crosshair’s vehement protests, Hunter makes the call to leave the Rebels unharmed. After Tech reveals that Omega is an altered clone like the Bad Batch, Hunter decides that she isn’t safe on Kamino, and they head back for her. After their disobedience on Onderon, the guys find trouble on Kamino. After a skirmish with the “regs,” or regular clones, they’re thrown in a holding cell… where Omega also happens to be after she was found snooping unattended. Crosshair is altered to strengthen the sway his inhibitor chip holds over his choices. The others take their chance to escape with Omega even as Crosshair fires on them with the regs.

The Bad Batch wastes no time and packs a ton of story into its 70-minute premiere. You can color me surprised that Caleb Dume and Depa Billaba appeared in this show, and so soon. Caleb Dume is the true identity of Kanan Jarrus, the Jedi who would train Ezra Bridger in Rebels despite never formally completing his own training. Dume and Billaba had a small cameo in season 7 of The Clone Wars, and their tragic backstory was detailed in Rebels. Kanan developed a distrust for clones after seeing his master killed, as well as a primal fear that wasn’t resolved until he had to work alongside Rex in Rebels. But seeing it firsthand and feeling the gut-punch Caleb experiences is a different beast entirely, and I’m glad they fit this scene in. Kanan is probably my favorite character in Rebels, so I appreciate seeing this crucial moment in his story. My only issue with this portion of the episode is that Freddie Prinze Jr. reprises the role. Don’t get me wrong, he was terrific as Kanan, and I’m glad he got the chance to return to Star Wars and breathe life into his character again. But Caleb is just a young boy at this time, and hearing a grown man’s voice when he speaks is pretty distracting for me personally. Caleb also seems much paler than Kanan in Rebels, which I find a bizarre artistic choice. The Clone Wars and Rebels have wildly different art styles, and that can account for differences in head shape and the fact that Caleb has pronounced lips. But the difference in skin tone is kind of jarring, and I’m not sure why they did that.

I’m also shocked that one of the Batch, namely Crosshair, is now an enemy. This is a brilliant direction for the character, as the Batch will be coming up against one of their own. That should add a lot of drama to their break-up with the Empire. Since Crosshair is being controlled, I can’t help wondering if they may redeem him down the road and have him rejoin his former friends and comrades. I also like the divide between Crosshair and Hunter over first Caleb, then the insurgents on Onderon, and finally Omega. Clearly, Hunter has a soft spot for children, which either Crosshair or the influence of the chip can’t understand. Admiral Tarkin is used exceptionally well in “Aftermath,” looming over the Batch and the clones as a whole with the ultimate power to decommission them and end their lives. It’s easy to imagine him as an overarching villain of the series, with Crosshair by his side executing his orders. It’s good to see Saw Gerrera again, and I liked his line about the people who were lost in the Clone Wars. You can tell he’s thinking about his sister Steela, who fell in love with Lux Bonteri and died in season 5 of The Clone Wars. There are many subtle moments and callbacks like this in “Aftermath,” and it’s easy to see Filoni and the crew have a lot of passion for telling this story. I’m intrigued by Omega being a female clone of Jango Fett. I can imagine some will have problems with this, but honestly, she’s not much more different from Fett than the rest of the Bad Batch. So far, I like her relationship with Hunter, and I assume he may take on a fatherly role with her around. It was a small moment, but using the sound clip of Palpatine’s speech from Revenge of the Sith was a stroke of genius. This scene is so unsettling, even though we already know what’s coming.

The animation in “Aftermath” is every bit as good as season 7 of The Clone Wars, and I think it’s safe to say we have a lot of eye candy to look forward to with this show. The environments look absolutely incredible, from the water world Kamino to temperate Kaller to the swampy Underon. The character animation continues to get better and better as well. The music in “Aftermath” is also remarkable. Kevin Kiner has outdone himself again. I especially liked the Bad Batch’s apparent theme music, as well as the tune that played when they arrived at Onderon. It feels like a given at this point, but Dee Bradley Baker can do no wrong with the clone voices. It’s amazing to think that Baker is arguing with himself in many of these scenes. He voices most of the characters on this show, but it never feels stale or distracting. Each clone sounds so distinct and full of character but still similar enough to be believable. Andrew Kishino is in full form as Saw Gerrera, and Michelle Ang is a welcome addition as Omega. But this is Baker’s show, and he steals every scene.

Overall, “Aftermath” is an excellent episode of TV. It’s almost feature-length, and they don’t waste a second of that time, taking the crew to various locales and covering a lot of narrative ground. This premiere already explores the Batch better than their Clone Wars episodes, and I can’t wait to see more of their exploits with Omega.

Gorgeous animation, brilliant character work, and a constant sense of adventure make "Aftermath" a great start to The Bad Batch.