“Old Friends Not Forgotten” finds Obi-Wan and a squadron of clones holding off a Droid attack. Anakin arrives and surrenders, which is, of course, a trap to lure the tactical droid out. As soon as he appears, Anakin orders R2 and his clones to attack. After a swift victory, Admiral Yularen informs Anakin that a Fulcrum agent has contacted him on his personal frequency. He also insists that Anakin should take the message on the ship. It turns out to be Ahsoka and Bo-Katan, who have information about Maul’s whereabouts and a plan to capture him. Obi-Wan is reluctant to pledge aid to the effort and fears letting his personal feelings cloud his judgment. This angers Bo-Katan and frustrates Ahsoka. Anakin leads Ahsoka to Rex and his clone trooper company, all of whom have painted their helmets in her honor. Just before Anakin can present her with a gift, a siren goes off, and Obi-Wan informs them that Coruscant is under attack and they must go there. Anakin divides the 501st division in half, sending half with Ahsoka and Rex, and taking the other half to Coruscant. Mandalorian Prime Minister Olmec sees the attack coming and sends a group of Mandalorians led by Gar Saxon to intercept. However, the Mandalorians are quickly overrun by their fellow warriors led by Bo Katan and the troops led by Ahsoka. They head underground to the Undercity under Olmec’s orders. When Ahsoka follows, her men are massacred, and she’s faced with Maul, who remarks that he wanted Kenobi and questions her presence.

From the very beginning of “Old Friends Not Forgotten,” it’s clear that Dave Filoni and crew have something special in store for the audience. Rather than the usual sped-up Clone Wars Star Wars theme, we’re treated to the classic John Williams version from the original trilogy. They also go with the original Lucasfilm Limited logo rather than the newer emblem. These small tweaks create a totally different atmosphere than the show usually employs, and what follows is, in a word, cinematic. Many fans have been frustrated with this season’s first two arcs; the “Bad Batch” episodes were already available in cinematic form, and while “Ahsoka’s Walkabout” wasn’t finished to the same extent, the story was altered to follow two sisters who were annoying and seemingly inconsequential. However, I expect many people (and I have already heard some) to say that this makes up for it. “Old Friends Not Forgotten” is only the beginning of the show’s final arc concerning the siege of Mandalore, but it is hands down one of the best episodes of The Clone Wars ever. The show’s musical score by Kevin Kiner has always been a wonderful mix of familiar tunes and new themes, but he somehow manages to bump it to another level for “Old Friends Not Forgotten.” And that statement applies to almost every aspect of this episode: it’s somehow a step above what I thought the best for this show was.

The opening sequence with Obi-Wan, Cody and the clones battling an army of Separatist droids is nothing short of sublime. The action in “Old Friends Not Forgotten” is spectacular all around, and this introductory battle is an excellent indicator of things to come. It’s exhilarating, it displays Anakin and Obi-Wan’s dynamic perfectly – not to mention their relationships with various clones – and it sets up the rest of the episode in the best way possible. I got literal chills when Admiral Yularen informed the two of the incoming transmission; I knew Ahsoka’s storyline was finally about to rejoin that of Anakin and Obi-Wan. It feels like a strange thing to comment on, as it should be the norm for any and all storytelling, but “Old Friends Not Forgotten” is so satisfying and exciting in part because everyone remains in-character throughout the episode. It’s frustrating when Obi-Wan doesn’t jump to Mandalore’s aid, especially when Satine is mentioned. After all, Maul killed her and then usurped her role as leader of Mandalore; you’d think nothing would be closer to someone’s heart than avenging a slain loved one. But that’s not who Obi-Wan is, and it never was. When he remarks that he can’t allow his feelings to cloud his judgement, and insists on leaving the decision up to the council, it’s a big character moment for him, but also for Anakin. Anakin and Obi-Wan are different in many ways, but Obi-Wan’s restraint and Anakin’s lack of self control are probably where the two diverge the most. We all know Anakin can’t put his duty or what is overall the right thing to do above his own feelings and attachments. It’s his greatest downfall and what ultimately creates Vader: selfishness. I also like how Anakin literally can’t contain his excitement at seeing his old padawan again, while Ahsoka cuts the chit-chat short in lieu of discussing Bo-Katan’s plan. This highlights Anakin’s attachment to Ahsoka, yet another step toward his downfall. Ahsoka still cares deeply for her former Master and dear friend, but she’s able to control her emotions enough to focus on the matter at hand.

This being said, one of the stand-out moments in “Old Friends Not Forgotten” is when Anakin leads Ahsoka to the 501st, all of whom have painted their helmets to resemble her. I almost teared up at this, despite having seen the helmet design in the trailer and poster for this final season. Her reunion with Rex is almost as powerful as the one with Anakin if they’re not tied. The clones still admire Ahsoka, insisting on calling her “Commander,” despite her departure from the Jedi temple and way of life. Anakin explains that they don’t care about that; “loyalty means everything to the clones.” This is touching in the context of this episode, but it’s haunting, given the fact that we know we’re getting closer and closer to Order 66. The Chancellor has been kidnapped, and we all know what comes next. There are too many incredible moments and scenes in this episode to harp on about each one, but finally, I do want to mention Maul’s re-introduction. It comes as no surprise that Maul expected this attack and intended to use it to exact vengeance on his mortal enemy, but the dialogue and atmosphere in this final scene really sell its epic nature. Ahsoka is a skilled fighter and a righteous servant of the light, but I’m curious to see how she manages to best Maul at this point, which she must do since we know they’re both alive in Rebels. Speaking of Rebels, this episode had a lot of tie-ins to its sister series, with the inclusion of Ursa Wren, Gar Saxon, Caleb Dume (aka Kanan Jarrus), and his Master, Depa Billaba, (who appears as a background character in the prequels). 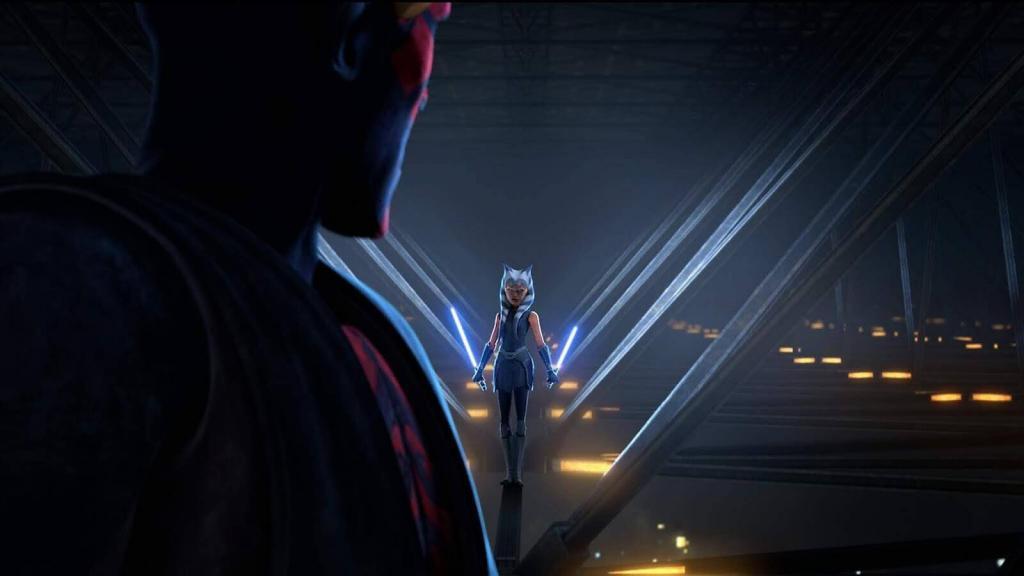 In short, “Old Friends Not Forgotten” is incredible. It’s my favorite episode of the show to date, and it’s hard to beat out the arc focusing on Ahsoka’s trial, Ahsoka learning about politics, the initial shake-up on Mandalore, etc. Don’t get me wrong; this is only the first episode, and it could go anywhere from here. But I get the feeling this is going to be a truly mind-blowing story arc.

In short, “Old Friends Not Forgotten” is incredible. It’s my favorite episode of the show to date, and it’s hard to beat out the arc focusing on Ahsoka’s trial, Ahsoka learning about politics, the initial shake-up on Mandalore, etc. Don’t get me wrong; this is only the first episode, and it could go anywhere from here. But I get the feeling this is going to be a truly mind-blowing story arc.

The only thing that I did not like about the episode… is that I am now hungry for more!