REVIEW: The Flash – Season 6, Episode 15 “The Exorcism of Nash Wells” 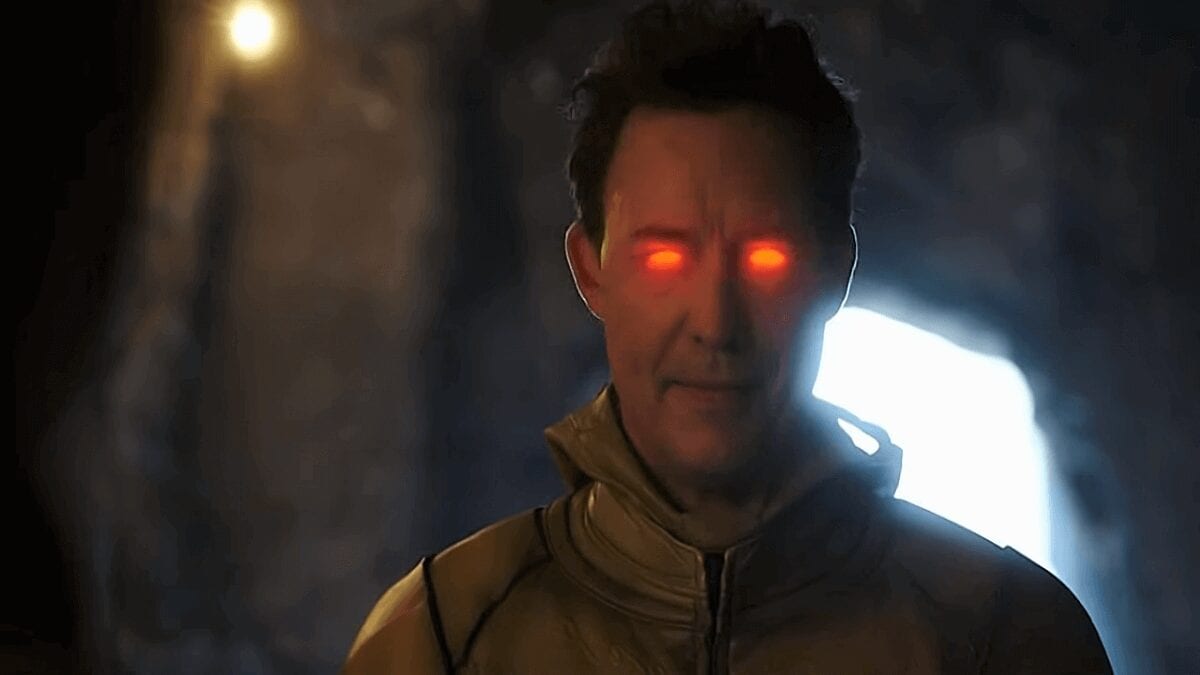 “The Exorcism of Nash Wells” confirms the fears with which “Death of the Speed Force” left me. We’re in for another round of Barry discovering that his heart/mind/spirit/lactose intolerance is his real superpower, or however they want to frame it. If we must go through this again, though, the way The Flash is currently going about it isn’t so bad, and “The Exorcism of Nash Wells” is a very good episode taken on its own. The acting is great, the different plot threads tie together nicely, and enough other things are going on that the show doesn’t have to dwell on Barry standing still. They even found a use for Cecile, after a really dumb gag.

The STAR Labs crew searches for a way to expel Eobard Thawne from Nash’s body. Barry has to monitor his speed use so he doesn’t lose it all but has trouble leaving the Flash behind. Eva sends her real-world minions after a device she invented, but a new metahuman villain gets there first. Thawne brings out the worst in Barry, and Caitlin fears his judgment is compromised. Joe enlists an old friend to help him investigate a potential traitor in the police department.

“The Exorcism of Nash Wells” wastes no time setting up Barry’s inner conflict; his powers are on borrowed time until they can build a new Speed Force the way Eobard Thawne did, and he’s got to make sure he saves up enough in case there’s a crisis (as opposed to a Crisis) and the world needs the Flash. To help him, Caitlin and Cisco have developed a speed monitor that looks like a heart rate monitor, which flashes different colors depending on how much speed Barry is using (I laughed at how they all just instinctively understood that red would be the most speed). The speed monitor is a good visual cue for the audience, a warning to us about how close Barry is to losing his powers – and, in relation to that, his nerves.

Because, while Barry has to keep himself in check, Nash Wells is living with the ghosts of his doppelgangers, and one of those is a psychotic supervillain with immense power. Actually, that’s not entirely correct; as Barry points out in “The Exorcism of Nash Wells,” Thawne isn’t a Wells doppelganger, just someone who stole Wells’ face. Thawne is powerful enough to have survived the consolidation of the Multiverse, however, and he’s hitched a ride with Nash in the hopes of taking over his body for good and returning to his evil schemes. How he’s able to do this ties into Nash’s connection with Allegra; she’s the doppelganger of his protégé, a girl he grew to love as his daughter – a girl for whose death he blames himself. Thawne feeds off of his pain and fear caused by that memory, and if he can keep Nash cowed long enough, he can emerge as the dominant personality and live again in corporeal form.

The key to saving Nash and expelling Thawne lies in Nash’s ability to grieve properly and forgive himself, something about which Barry knows a great deal. When Thawne emerges early on in “The Exorcism of Nash Wells,” he reminds Barry of Nora’s death and his culpability in it. Barry almost loses his moral center, prepared to murder Thawne via the villain’s preferred method of execution, the vibrating hand. When faced with Nora’s death, Barry can’t see that he’s using up valuable speed, or that he’ll be killing Nash as he exacts his revenge; he just wants to destroy his archenemy once and for all. Similarly, he can’t let go of his responsibility as a superhero, unable to trust Frost with tackling Black Hole’s new agent, Sunshine. As he almost resorted to murder with Thawne, he now takes Velocity-X to deal with his speed issues and ends up almost getting Frost/Caitlin killed, like he almost killed Nash to get to Thawne. 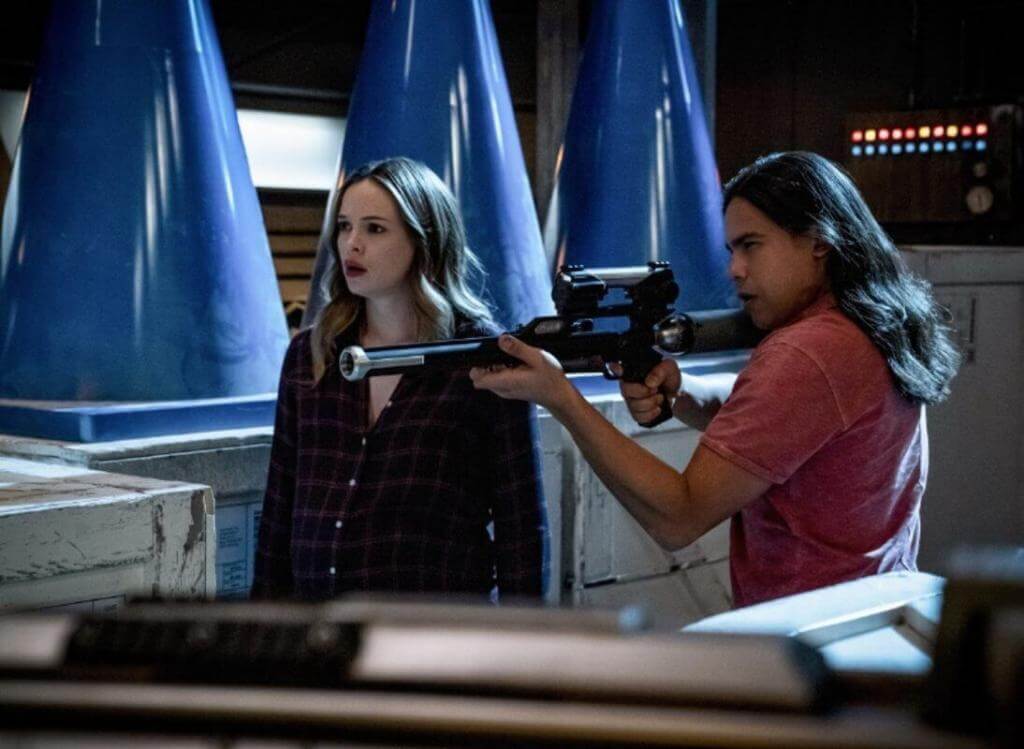 Barry’s solutions to these problems come from within, as we knew they would. He traps Sunshine using his brain, taking her powers out of the equation and allowing Joe and the police to arrest her. And with Nash, Barry enters his mind and faces Thawne once more. While Cisco helps Nash come to terms with his loss, Barry does the same for himself as Thawne taunts him. Barry cries for his daughter but refuses to let her death turn him into the monster her killer has always been. This leads not only to Nash being saved and Thawne being banished but to the key to creating a new Speed Force – Nora’s journal. Nora figured out how to make a Speed Force, and now Barry will allow his daughter to save him, despite his failure to save her. It’s a beautiful ending, an ode to the love between a parent and child that not even death can erase, and if we have to sit through more non-Flash Flash stuff to enjoy it, so be it.

The subplots in “The Exorcism of Nash Wells” are mostly there to keep the season’s arcs on simmer. Fake Iris created a Fake Kamilla when she shot Cisco’s real girlfriend with that ray gun last week, and now Eva has two links to the real world. Eva needs a thing to power a thing so she can do a thing, and she sends her clone henchwomen to get it. At the moment, this is mostly inconsequential, but we learn a couple of important tidbits nonetheless. First of all, when Eva appears to Fake Iris and Fake Kamilla, she’s standing in a room identical to theirs, as opposed to the lab where we’ve seen her so far. And it’s not just their perception; Eva is actually standing in a room that looks like theirs. Do her other rooms look like different locations around the city? Can she replicate the area where someone else is standing? If so, why has she only done that now? Or is it possible this is just a continuity flub and the production wanted to save money by filming it all in one location? Moreover, Eva and Black Hole are not on the same side, as she wants to recover the MacGuffin before Sunshine does. I like how this is progressing, and while the season is winding down (and the production has halted because of the Coronavirus), I’m content to let it come in fits and starts. I like seeing Joe and Captain Singh team up; this is a neat way to bring Singh back, and while they seem to believe Sunshine was the source of the compromised intel, I tend to think there really is a traitor in the department (and that it’s the woman Joe always has around him). I also appreciated that Cecile actually has something to do this week and that it involves her powers. I could have done without the idiotic exorcism gear, though; they really make her out to be a moron sometimes. 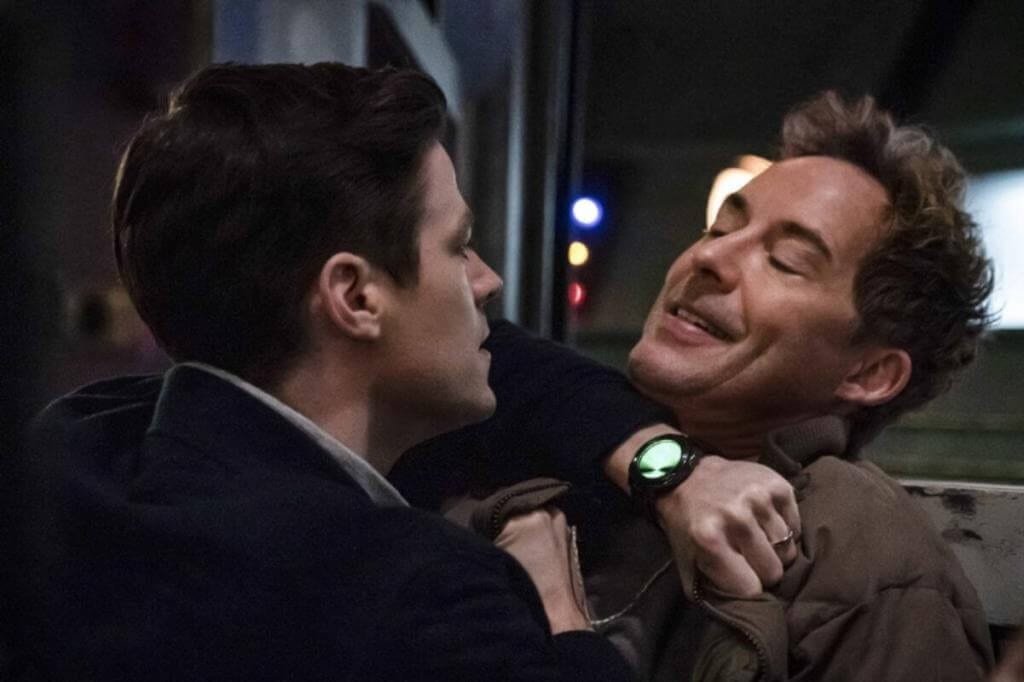 But my favorite aspect of “The Exorcism of Nash Wells” is Eobard Thawne. His reemergence involves a lot of wacky gobbledygook, but it’s easily digestible, and it makes him even scarier as it reveals more of his abilities. We’ve seen it before, but there seems to be no killing Revere-Flash. Every time it looks like he’s gone, he shows up once again, having used some heretofore unseen power to escape death. The destruction of almost the entirety of the Multiverse couldn’t even stop him, and once the “exorcism” is complete, he remains alive, if only in the form of tachyons, leaving little doubt that he’ll be back. I’m amazed at how they continue to resurrect Thawne and it never feels like a cheat (unlike, say, Damien Darhk, who I loved before the Arrowverse ran him into the ground). I’m also happy that Thawne is now almost always played by the great Tom Cavanagh; Matt Letscher is good too, but Cavanagh is perfect, frightening in his confidence and uncomfortably likable in his affability. Cavanagh’s long been one of the show’s secret weapons, playing so many different versions of Harrison Wells and keeping them all distinct from each other, and he shows that off at the beginning of “The Exorcism of Nash Wells.” Nash helps Cisco find a way to rid him of Eobard Thawne, but just as Cisco triggers the device, he gives a wink to Barry, letting the Flash know that he’s been Thawne playing Nash the whole time. That wink is so subtle, but it’s clear immediately that it’s Thawne doing it. How Cavanagh keeps them all straight is a mystery, but it’s astonishing watching him continue to do it six seasons into the series. And since Sunshine is as lame as her name implies, Thawne is doubly appreciated this time.

The Flash – "The Exorcism of Nash Wells"