Friday Flash Facts: The Speedster Villains of the CW Flash 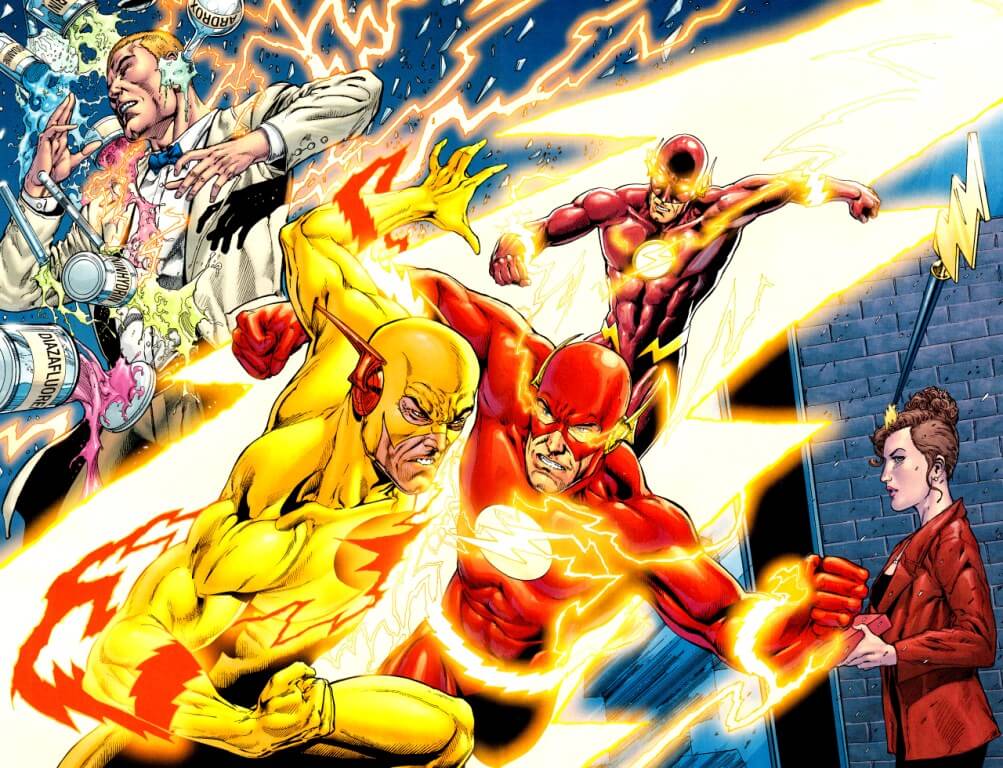 Flash faithful have been acutely cognizant of the liberties the hit CW television show has taken with the comic stories and characters. In many ways, the show, now in its fifth season, is asymmetrical with the comic book source material in nearly every facet beyond the name of the protagonist and his powers. Clearly, this hasn’t stopped millions of viewers from tuning in each week and enjoying it, and that’s a good thing! It is important, however, to be aware of that from which the show’s writers have decided to deviate in order to be more well-rounded with your knowledge in all things Scarlet Speedster, so Geeks + Gamers is here to provide you with some more Flash Facts! The CW show has taken liberties with a great many pieces of the Flash lore; from things as small as Barry Allen being taken in by Joe West, and Iris’ presentation and role within the series, to how Barry got his powers in the first place – hint: it wasn’t caused by a particle accelerator in the comic books. Even the existence of the S.T.A.R. Labs-based Team Flash is something entirely unique to the show, and this is something that, for the purposes of television at least, works because a lot of times a mostly solo character can only grow so much on-screen. There are many other liberties that were taken as well, including many of Barry Allen’s supporting cast and minor “villains of the week,” but what about some of the more marque alterations to Flash mythos? With each season, The Flash has taken a different villain from the DC comics character’s history and used them as their “big baddie.” Several of these Flash villains are incredibly iconic within the history of the Scarlet Speedster, and each one of them has been changed, whether in minor or major ways, from their original incarnations. This week we’ll introduce you to the comic book counterparts of some of The Flash’s main bad guys with a specific focus on the speedster villains.

The first season’s baddie is the perfect starting line with Eobard Thawne, aka Professor Zoom, aka the Reverse Flash. Created in 1963 by John Broome and Carmine Infantino, and first appearing in The Flash (Vol 1) #139, Eobard Thawne was a man from the 25th Century who was obsessed with the 20th Century’s heroic age and, most especially, the Flash Barry Allen – even going so far as to have his face surgically altered to resemble his idol. Depending on the comic book continuity, Eobard’s transformation from hero-obsessed fan to a hateful and evil villain is slightly different. Professor Zoom’s (his moniker given because he was curator of the 25th Century’s Flash Museum and was the most knowledgeable on all things related to the Speed Force) original origins center on coming into possession of Barry Allen’s cosmic treadmill (literally a treadmill which Barry uses to travel through time) and spending the entirety of his family fortune to duplicate the chemical reaction that had gifted his idol his super speed. Once equipped with the ability to use the cosmic treadmill, Eobard Thawne traveled back in time to meet his hero. But the treadmill’s calibration had been off from decades of going without use (like tuning a piano? Sure, why not?) and he instead wound up traveling to several years after Barry Allen’s heroic sacrifice in Crisis on Infinite Earths, when former Kid Flash Wally West had taken up the mantle of the Flash. It was here where he learned that he was destined to become Barry Allen’s greatest villain, the Reverse Flash, driving him insane. The Reverse Flash has been a Thawne in Barry’s side since day one and has proven to indeed live up to his destiny as his greatest foe. In The Flash: Rebirth by Geoff Johns and Ethan Van Sciver, Thawne reveals himself as the architect of all the tragedies in Barry’s life, from small things like falling and breaking a bone to murdering his mother Nora. Reverse Flash is exactly what his name implies, the reverse of the Flash, and as such has powers that differ from those who are normal Speed Force conduits. He created the Negative Speed Force upon being resurrected from the dead in the aforementioned Flash: Rebirth and his red lightning is representative of him being highly attuned to that force and far along the scientific spectrum concept known as “Red Shift.” He was not disguised as Harrison Wells to trick Barry and the rest of S.T.A.R. Labs into creating the accident that gave Barry his powers like he was in the show, and his CW incarnation is exceedingly tame compared with the bonafide psychopath that Eobard Thawne is in the DC comic universe. 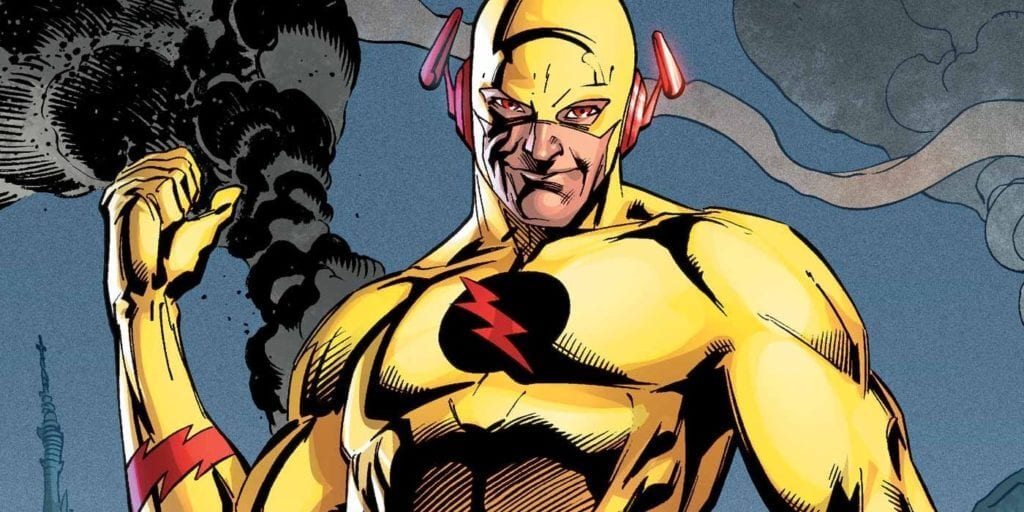 Next up is the comic book counterpart of The Flash season 2 villain, Hunter Zolomon, aka Zoom, the second of the Flash villains to don the reverse colors of the iconic speedster suit, who was created by the great Geoff Johns and Scott Kolins in Flash: Secret Files and Origins #3. Hunter Zolomon grew up in an incredibly strained household. To say that his relationship with his parents wasn’t the best would be a gross understatement, and before he left for college, he came home one day to find the police besieging his house. It was revealed to him that his father was a sadistic serial killer who preyed specifically on young girls and had killed six of them. He also murdered Hunter’s mother upon finding out that she had been the one to out him to the local authorities, before being killed by the police in a standoff. Desiring to gain an understanding of the criminal mind in order to stop others like his father, Hunter studied criminal psychology and joined the F.B.I. before a case that went awry forced him to leave and take up a profiling position within the Keystone City Police Department. It was here where he met Flash Wally West and their constant contact with cases made them close friends.

Tragedy seemed to follow Zolomon, however, and it wasn’t long before a rampaging Gorilla Grodd injured him while staging a prison break. Bereft at the resulting waist-down paralysis from his injuries, Hunter Zolomon pleaded with Wally to use the Flash Museum’s cosmic treadmill in order to go back in time and prevent the attack that left him a paraplegic from ever happening. Wally refused to do so, citing the immense danger that tampering with the timestream can bring, but Hunter boasted that their friendship should mean more to him than that and he soon broke into the Flash Museum and attempted to use the time-traveling treadmill without the aid of the Flash. His plan backfired, and the consequences of his actions derailed him from the timeline and gave him the ability to manipulate the speed with which he moves in time, giving the appearance that he’s moving at super speed. Zoom’s motivation from there on out became that of causing great tragedy in Wally West’s life, believing that he wouldn’t be able to become a true hero without having suffered from it himself, even going so far as attempting to murder Wally’s pregnant wife Linda while she carried their twins. Zoom isn’t connected to either the Speed Force or the Negative Speed Force of Eobard Thawne, and as such does not actually possess super-speed, but rather is able to alter the flow of time specifically relative to himself and can thus slow down or speed up as he desires. This ability allows Zolomon to appear to exceed the speeds of most speedsters, being only outclassed by Wally West. Velocity 9 or disguising himself as Jay Garrick has nothing to do with him (he also doesn’t wear black), and as you can see from this section, Zoom is actually a classic Wally West villain, with Barry Allen almost barely having met him. 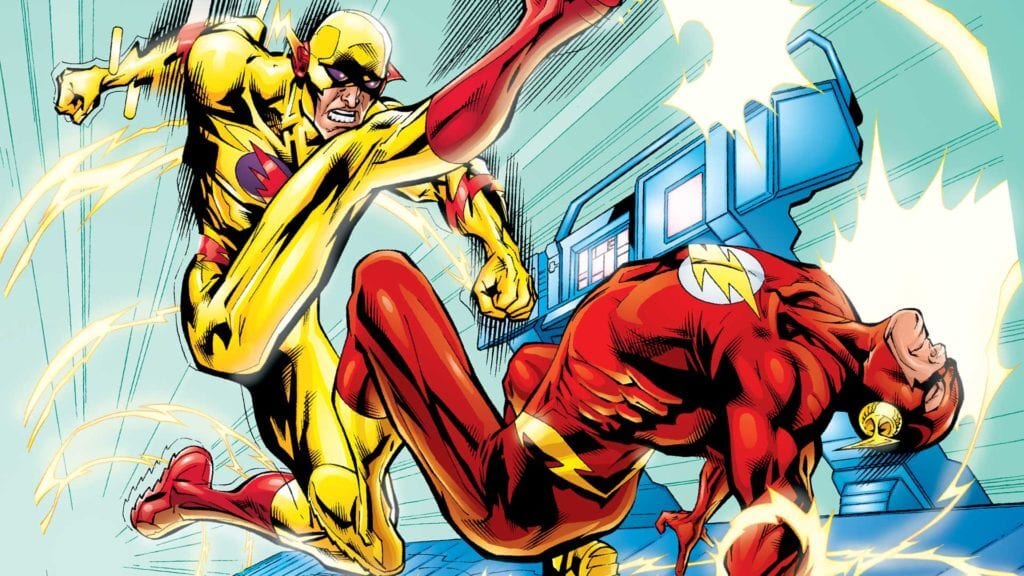 Flash fans cringed their way through a lot of season 3 of the TV show, and for good reason; it could not have been further from the source material, especially with respect to its season villain, Savitar. I’ll just start with this: Barry Allen is not Savitar at all, nor is Savitar one of his “time remnants” (because that’s not a thing) gone off the deep end. Now that that’s out of the way, let’s get down to brass tacks. The man who would eventually become the speedster villain who donned the name of the Hindu god of motion was originally a Cold War Pilot selected to test a prototype supersonic fighter jet and created by Mark Waid and Oscar Jimenez in Flash (Vol 2) #108. Upon his jet being struck by lightning while approaching top speed and crashing in enemy territory, the pilot soon learned that he possessed super-speed and proceeded to defeat the enemy using his newfound powers.

He soon became obsessed with speed and dedicated his life to unlocking the secrets of the Speed Force, a quest that he was successful in as he began to discover speed and motion-related powers that no other speedster had mastered at that time. He gained a group of followers who soon formed into a large cult that worshiped Savitar as a god, even rendering most of the other speedsters, including Impulse Bart Allen, Jay Garrick, Max Mercury, XS, and Johnny and Jesse Quick useless by stealing their speed for himself. Wally West, having attained Speed Force Nirvana at this point, was unaffected by this ability because he mainlined the Speed Force, and led Savitar on a chase into the Speed Force itself, trapping him there. Savitar possesses many abilities that most other speedsters do not, including that of generating a null inertia force field that renders any projectiles useless against him, near-instant healing, and the ability to power his cultist followers with his own speed. Of these abilities, only one of them has been mastered by another: Wally West has the ability to share or steal inertia from any object or being. 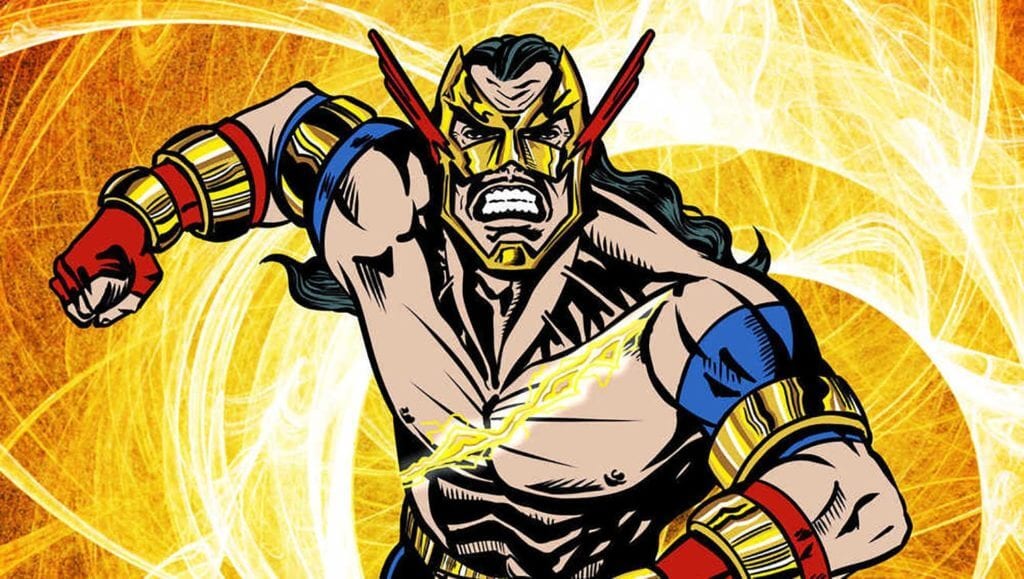 Which of these Flash villains would you like a future Friday Flash Facts to expound upon? Let us know on Twitter and in the comments down below!