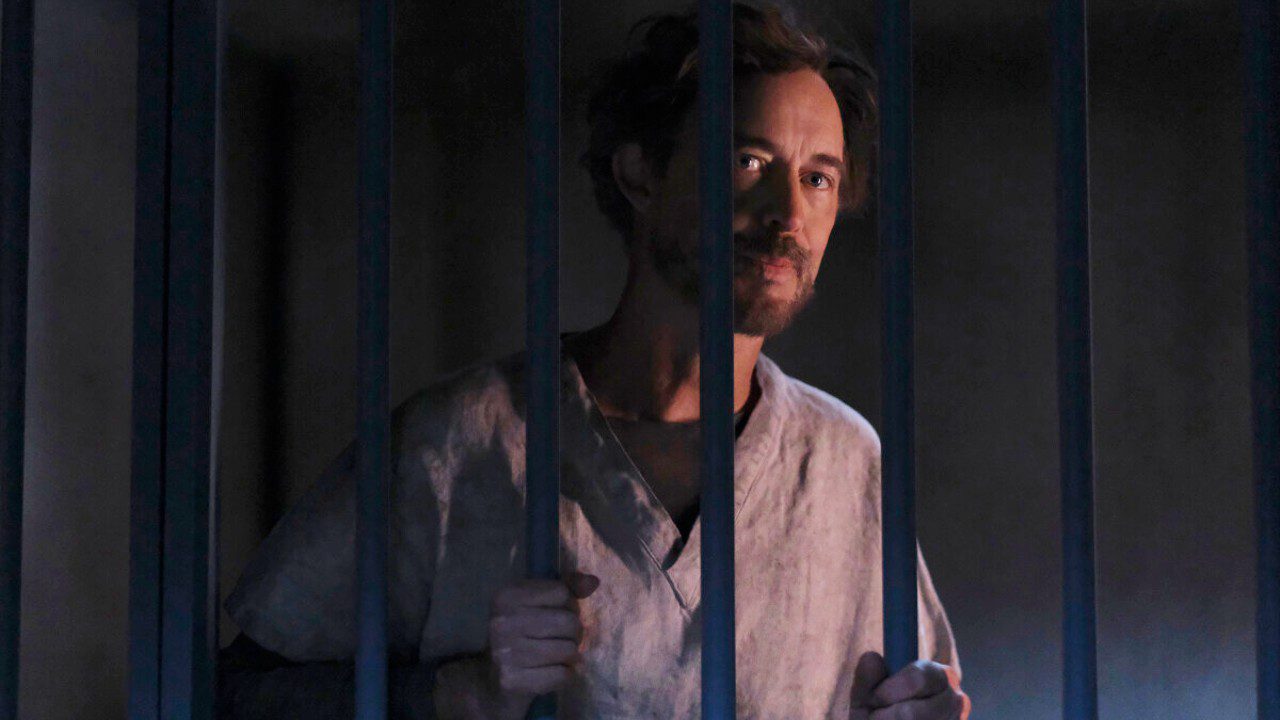 With only two episodes to go – or one two-part episode, depending on how you view these things – The Flash finally kicks the season’s main story back into gear with “Negative, Part 1.” Revelations and shocking moments abound, but it’s also a narrative mess, spewing exposition so rapidly that it becomes confusing, and doubly so when you realize a lot of it doesn’t make much sense.

There’s a lot going on in “Negative, Part 1,” and it all starts in the future, where Nora and Bart are playing video games. (I rolled my eyes too, but they’re a lot better here than they were last time they showed up together.) A virtual phone call from Iris is cut short when she disappears and is replaced by… Iris. This is our Iris, though, a younger version of the mom they’re used to seeing. In other words, Iris has finally reappeared, only twenty years late. It’s not as big a problem as it seems, though, because the future has advanced technology, meaning Iris can finally find out what’s been causing her time displacement.

The answer is negative tachyons, and this works because it ties into other things that have been going on, even in episodes that we now realize felt more standalone than they really were. The Negative Speed Force has been the source of all the trouble this season. Iris has been infected with its tachyons, and that’s why she’s got her condition. Deon is not the Deon we know, but a counterpart to the Still Force created by the Negative Speed Force. He and the other Negative Forces were weakened when Barry severed Thawne’s connection to the Negative Speed Force, and now they want a monopoly on power. So they’ve destroyed the Forces Barry and Iris created – save the Speed Force, which they say is locked away or something – and they’re taking Negative tachyons from Eobard Thawne and, through some trickery, Iris.

At least, that’s what I think is happening. “Negative, Part 1” is confusing, dishing out exposition in an almost constant stream, and it comes so fast that it’s impossible not to miss some things. I rewound several scenes a few times, and I still don’t think I have a handle on the plot. This is due in large part to The Flash having so many standalone episodes, and while “Negative, Part 1” ties into some of them, others feel like a waste of time. Instead of “The Curious Case of Bartholomew Allen” or “Keep it Dark,” they could have explained the details of the Negative Forces little by little, pacing the audience so they could follow it. Instead, everything comes out this week, and it’s so dense that it doesn’t feel like it holds together. Even the Deathstorm storyline seems like a distraction now, outside of Frost’s death, which could have been accomplished by something related to the Negative Forces. 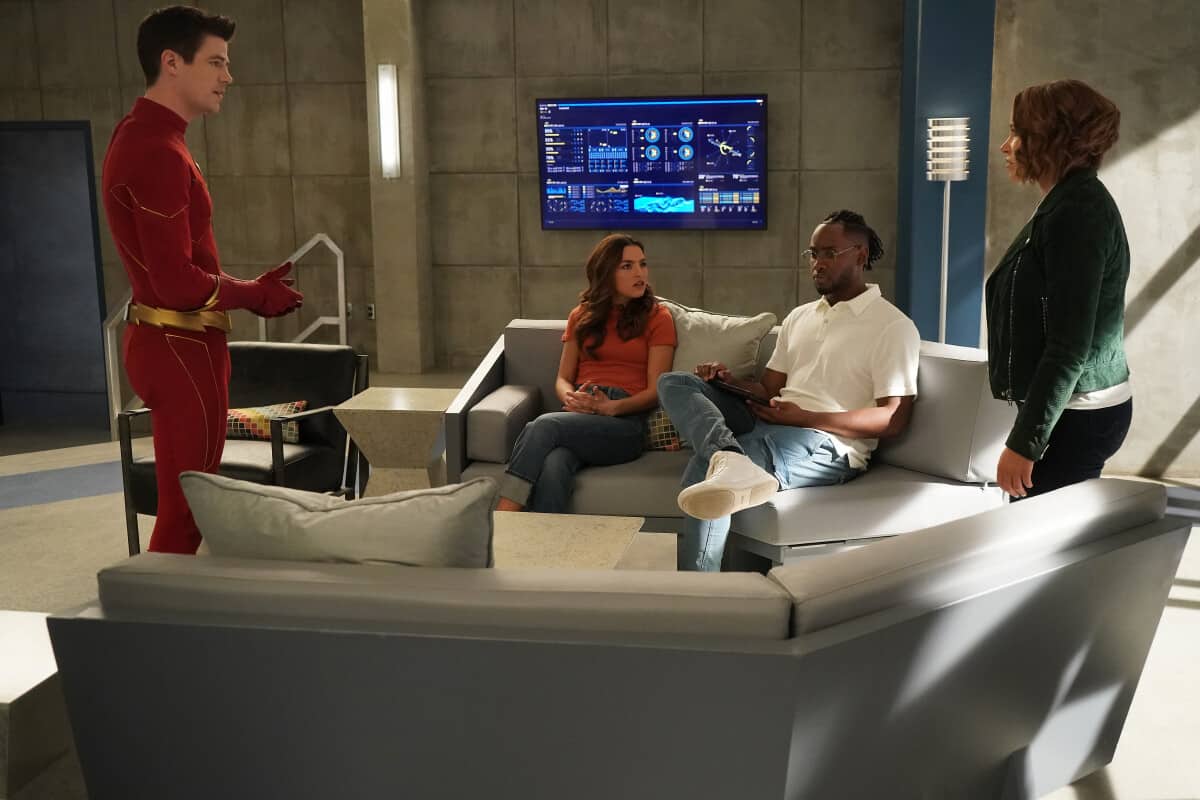 But this is where we are, and while it’s difficult to follow, “Negative, Part 1” introduces some fascinating ideas, although some of them don’t quite make sense. The Negative Forces, while clearly evil, are also acting out of a survival instinct; they’re constantly talking about “the avatar,” specifically in reference to Eobard Thawne – the good Thawne, played by Matt Letscher. They say he isn’t the avatar, so they want to kill him like Deon did the evil Thawne. They’re referring to the avatar for the Negative Speed Force; this is why they’re losing their power. Thawne, in both his guises, is their target, and it’s related to their survival. So, is Barry responsible for what they’re doing? He’s the one who removed their tether to existence, and while they’re going overboard in their desire to live – they want to rule as well – this may not be happening if Barry hadn’t taken Thawne’s speed. But if Barry had let Thawne die, wouldn’t the avatar be gone anyway? If not, they don’t explain how, and if so, Barry isn’t at fault. Again, they’re shoving so much into this episode that everything doesn’t hold together.

But aside from the wobbly plot, “Negative, Part 1” has some fun and exciting moments. (Neither of the undercooked subplots involving Cecile and Caitlin are among them; I’m tired of Caitlin showing up for thirty seconds an episode – either do something with her or don’t.) Barry looking defeated, only to come to life and blast the Negative Forces with lightning, is an excellent image, a heroic contrast to his ill-advised destruction of Caitlin’s makeshift lab earlier in the season. But the triumph of that scene is reversed at the end, when he hurls a super-charged lightning bolt at the Negative Forces, only for Deon to bring Iris into its path. This moment works because it explains why Iris disappeared and why she couldn’t get back to the present. Deon has been holding her until this moment, when he could push Barry into slaying his own wife, giving them her tachyons… I guess. They don’t explain why they need Iris, so I assume it has to do with her tachyons – which would indicate that Deon didn’t cause her time issues in the first place. I also don’t understand why they needed Barry to kill her; why didn’t they just do it themselves at one of the million opportunities they’ve had, especially if Deon can transport her through time at will? He was able to kill Thawne on his own and get his tachyons. This is what makes “Negative, Part 1” so frustrating; even a lot of the cool stuff doesn’t make sense. 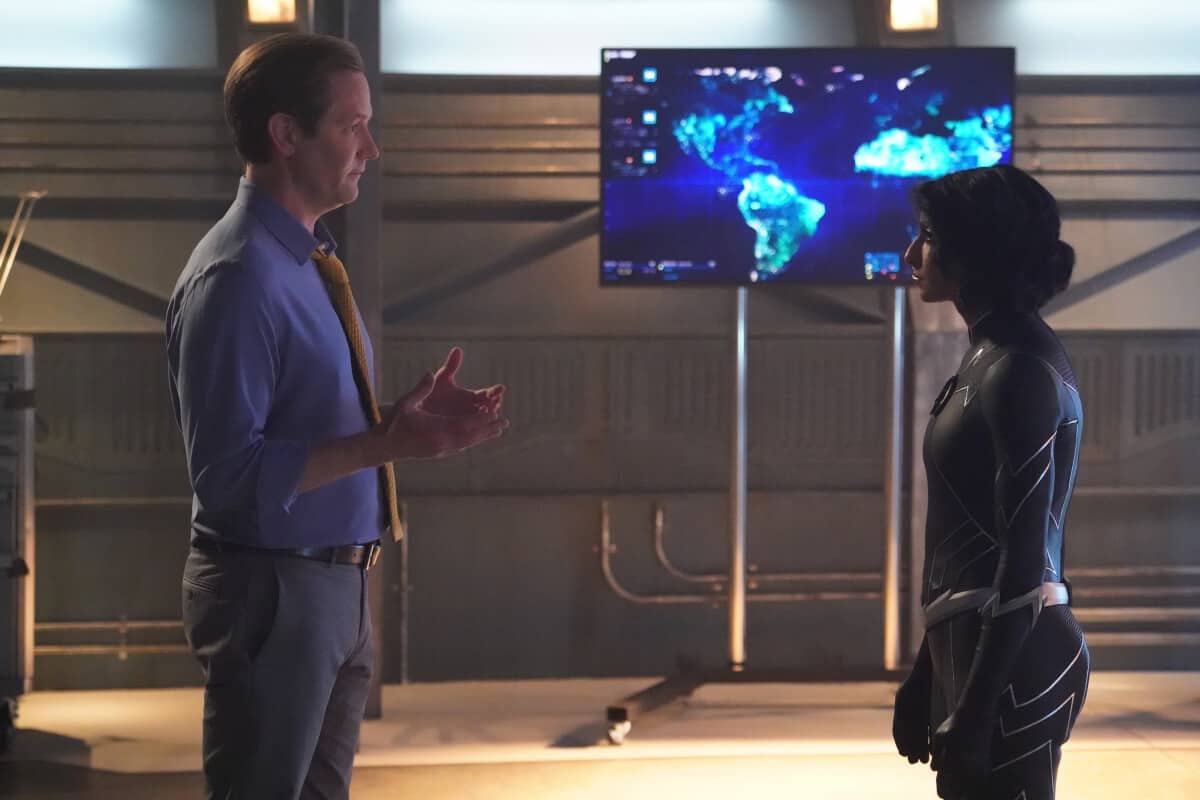 However, it is a showstopper watching Barry strike Iris down like that and seeing her fall dead into his arms. I mean, it’s somewhat tempered by the fact that I don’t for one second think Iris is really dead, or at least permanently dead, but all the same, it’s got to be devastating for Barry. And in the very next moment, the evil Thawne returns, clawing his way out of the good Thawne’s body with his speed returned. This makes more sense than the Iris gambit (good name for a Ludlum novel), at least from Deon’s perspective. He needed the Reverse Flash back, so he manipulated Barry into giving the good Thawne his speed, then replaced him with the evil Thawne. I love how, no matter how final his death looks, Eobard Thawne is never really gone, and he always shows up at the worst possible moment. I don’t understand how Iris’ essence dust (or whatever we’re supposed to call that) recreated Thawne instead of her, though. It’s possible that some of these inconsistencies will be explained next week, but for now, so much of “Negative, Part 1” doesn’t make sense.

“Negative, Part 1” finally explains what’s been going on in the main plotline, but it does so in a rushed, confusing way that doesn’t logically hold together. This undercuts some otherwise big moments and makes the last leg of the season feel like it’s been slapped together. There are some good scenes, though they have to be appreciated independently from how well they fit the story.