In “The Sin,” the Mandalorian receives a message from Greef Carga congratulating him on his capture of the child and cryptically stating, “You know where to find me.” When the Mandalorian arrives for the reward, he’s greeted by two men in Stormtrooper uniforms who lead him to the client. The buyer is pleased with the baby’s health and pays the bounty, but our hero isn’t satisfied, asking what his plans are for the child. The client insists that he take his payment and go, as per the guild code, and so he does. He takes the payment, more Beskar steel, back to the smith who previously worked on his armor. The steel bears the Imperial mark, prompting another Mandalorian to call the protagonist a coward. A fight breaks out, but the smith ends it by observing that anyone who chooses this way of life is no coward. She then offers to create his signet in the likeness of the creature he killed, but he declines, as it wasn’t an honorable kill.

Back in the tavern, the Mandalorian asks Carga how many guild members had fobs, to the reply that they all did. He demands his next job and Carga supplies, even letting him choose from several. However, he can’t stop worrying about the child and heads back. He finds the baby’s carrier in the trash and decides to investigate further. He overhears the client telling the Stormtroopers to “extract the necessary materials (from the baby) and be done with it.” The Mandalorian breaks in and begins killing his way to the baby. He finds him asleep on a table with a man who claims to have protected him. In the blink of an eye, the Mandalorian has left with the child. As soon as the pair has vacated the premises, guild members’ tracking fobs start blinking, signaling that the bounty is back on. Soon, Carga and everyone else have the Mandalorian surrounded. They offer to let him go free if he hands over the baby; naturally, this leads to a shootout. Just as all hope seems lost, fellow Mandalorians rise into the air, shooting the bounty hunters and allowing our hero to escape with the baby. Carga has somehow sneaked aboard the ship, but the Mandalorian shoots him, causing him to fall out of the hatch, and then flies away. 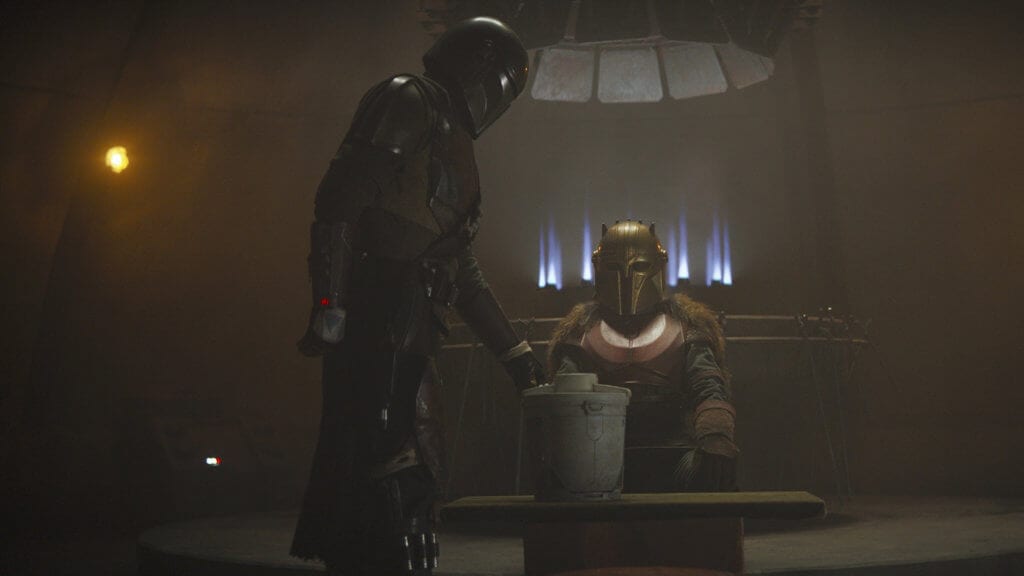 Munir: This is my favorite episode of the season so far. It had great action set pieces, and the stakes became higher. I’m still not very invested in the Mandalorian as a character, but at least he now has a much clearer purpose. The rescue and escape scene was very thrilling to watch, featuring some of the things that Star Wars has done yet, and it illustrated why he’s considered one of the best bounty hunters. The rest of the episode was a little predictable, as I already knew he would go back for “Baby Yoda,” but that didn’t detract from my enjoyment as a whole. What did you think of the episode, Virginia?

Virginia: “The Sin” is my favorite episode so far as well. I agree in that I was pretty sure he would go back for the child, but it was a satisfying moment nonetheless. I actually am liking the Mandalorian a lot as a character, and more with each episode. I love the bit about Baby Yoda playing with the ball control from the Mandalorian’s ship. I thought this was sweet, and I really liked the end when the Mandalorian gave it to him.

M: I don’t dislike him per se, but I find it difficult to relate to a character where I can’t see his emotions. Darth Vader got away with it mainly because he had an excellent vocal performance, but I still need to see more of this character. I know that’s not “the Mandalorian Way,” but I wish there could be some way I could relate more. Also, as I said in the previous review, I find his flashbacks showing a tragic childhood as something very unimaginative. Most Star Wars characters have that at this point, so it does little to make me sympathize with him. That being said, I like how he remains somewhat of an enigma, as you don’t really understand his motivations yet. Is he good? Is he bad? Somewhere in the middle? I like that aspect, but I wish I could be more invested in him.

V: I also don’t find the character that relatable personally, but I find him compelling enough to want to see what happens to him. I would agree that his backstory is pretty standard from what little we’ve seen, but it works for me because it informs his actions. His choices to sponsor foundlings and go back for the child tell us a lot about how his past has shaped him. In spite of being a ruthless bounty hunter, he’s being directed by a weakness for helpless children, and I do find that interesting. 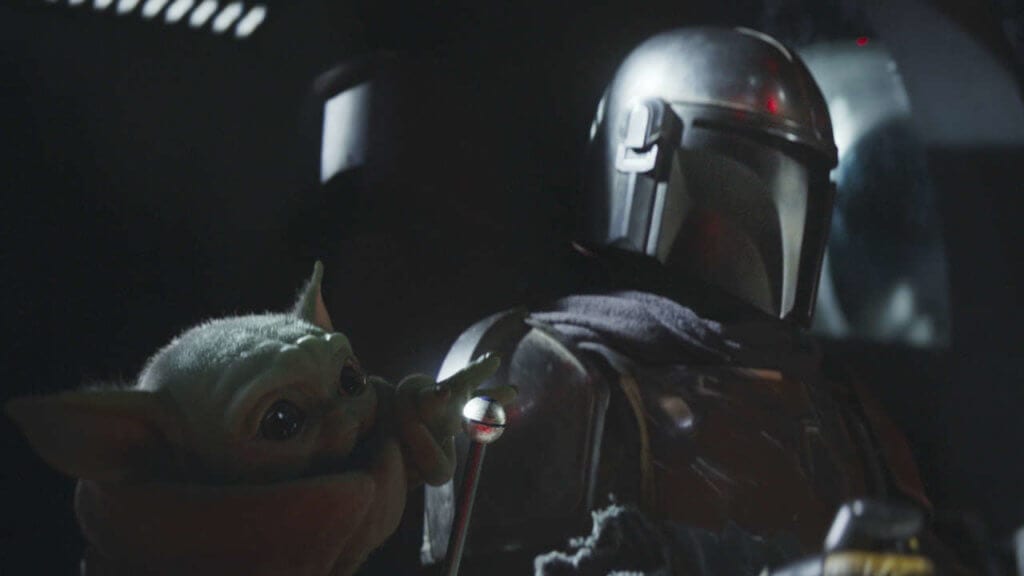 M: That’s certainly interesting, and I’m eager to see what happens next. I also liked how “The Sin” showed more about the Mandalorians as a whole, and how their society operates now. I love how, at first, he seems at odds with some of the others, but in the end, they banded together to help him escape. That is the Way, indeed.

V: That was a really cool moment and displayed the strength of the Mandalorian community and way of life. It’s interesting that the one who called him a coward in the bar was one of the main people to help him.

M: Another character that I want to see more is The Client. Werner Herzog’s performance is excellent, and I’m intrigued to see him more, and for his motivations to become clearer. Do you think the episodes are a little too short? I think they are. I don’t want 1+ hour if it does not warrant it, but at a little over 30 minutes, I feel some things are underwritten and undercooked. I like shows that don’t have filler or meandering plots, but I feel like The Mandalorian could benefit from some extra time.

V: I’ve enjoyed him a lot too. I was shocked to see him in episode one, and he’s been an absolute mysterious delight. You may be right about the runtime, but it hasn’t been bothering me. The story and characters are pretty basic at this point, so I guess they just don’t have that much to pack into each episode. I am loving the ride, though. I like this series more with each successive chapter.

M: I can agree to that. It certainly has been improving with each episode, and I look forward to seeing how the whole season will play out. I also like that the episodes are released on a weekly basis instead of the entire season at once. This way, you can have time to analyze what you see and anticipate what could come next.

V: I couldn’t agree more. At first, I really liked Netflix’s method of posting whole seasons, but I don’t think I really enjoy binge-watching as much. It’s not how TV was meant to be consumed, and you miss a lot of details that way. I think you absorb a lot more when you’re left to watch and think about a 30-60 minute episode for a week. And it creates anticipation; I legitimately am excited for the next chapter to drop next week. Really gives me something to look forward to when I get off work.

M: What did you think of “The Sin”? Let us know in the comments, and don’t forget to come back for another review of The Mandalorian!

"The Sin" is our favorite episode of The Mandalorian yet. Excellent action setpieces, interesting story beats and development of the title character make this one a winner.