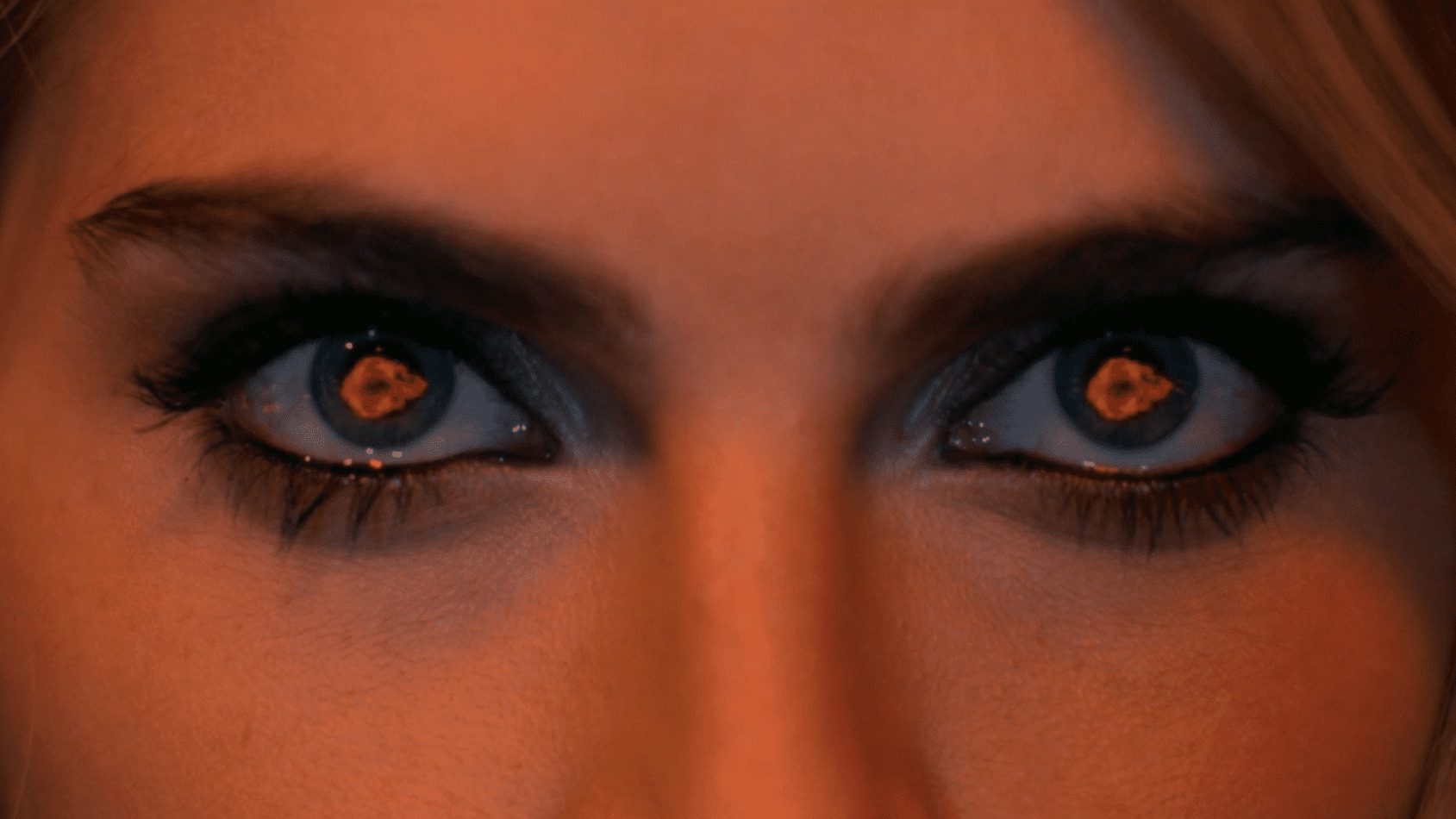 The penultimate episode of The Orville: New Horizons, “Domino,” sees the beginning of the end of this Hail Mary season. This episode is full of surprises from its competent writing, incredible character arcs, the decision of whom to make the villains, and some impressive twists in several supporting characters. Even the conflicts with the Kaylons, Krill, and the Moclans are all turned on their heads with shocking twists that come out of left field. It seemed impossible that anything would rival the quality of the incredible first episode of New Horizons, “Electric Sheep.”  However, “Domino” may very well have done it. This episode expertly balances the best action of this new season with the epic conclusion to one of the greatest character arcs in modern television, creating a phenomenal episode that might be the best of The Orville to date.

Penultimate episodes are difficult, nearly as difficult as finales, as they need to start wrapping up all the loose story threads and begin a satisfactory conclusion to the season. The tension needed to sell the stakes of such an important episode is difficult even for the best writers to achieve. Despite the difficulty, “Domino” accomplishes all of these things. The tension is taut throughout, keeping the audience on the edge of their seats.

“Domino” sees the creation of a superweapon capable of eradicating all the Kaylons in one fell swoop. However, the ethical dilemma such an action would cause sends ripples throughout the Union and the Orville. The argument of safety and security versus the opposition to genocide is a difficult one to undertake. In the end, the Union uses the device to force peace as a deterrent. But this peace is short-lived, as the device is stolen and delivered to the Krill and the Moclans, who will not hesitate to use it to wipe out the Kaylons. Uncommon allies, the Union and the Kaylonx must join forces to reclaim the device and prevent mass genocide.

The emotional heart of “Domino” is Charly and the evolution that she has undergone since “Electric Sheep.” Her hate has driven her since the war began until it was tempered by the development of her relationship with Isaac. Throughout this season, her empathy and understanding of the Kaylons have grown, to the point where she says the Kaylons “could learn something from Isaac.” Just a few episodes ago, Charly would have been incapable of saying something like this. She also would have been incapable of giving her own life to protect the Kaylons’ right to live. In her final moments, she chooses forgiveness and duty. This character arc is something foreign to modern Hollywood and is written with incredible skill. All this makes Charly’s death mean something and makes it impactful. Her death could have been slightly better if she had remained silent, as her final words are cheesy at best. However, it is still a compelling farewell to a phenomenal character. Anne Winters has done an incredible job bringing this vibrant and full ensign to life. Charly has easily become one of the greatest parts of New Horizons and the entire series. She will sorely be missed, but her character arc is at a close.

The central conflict in “Domino” comes from the ethical dilemma of security versus life. A lot of the characters disagree and have good points when it comes to the eradication of the Kaylons or their submission. The end of the episode neatly proves that both sides are wrong, though not equally so. The choice to use the weapon of mass destruction as a deterrent against the Kaylons is simply a half-measure with short-term success. The Kaylons would only see such an arrangement as a continuation of their builders’ slavery. Eventually, they would have figured out a way to disarm or bypass the weapon and renew their assault on biologicals. The only solution was to show them they were wrong, and only one person in the show could do that. Only the sacrifice of Charly, someone who hates the Kaylons so much, could show them that the Union is not the same as their builders. She died to save them, proving to them that the Union believed their lives had value, which their builders did not. The exploration of this ethical dilemma is fascinating, especially when it’s inverted by the true resolution of the episode and the conflict with the Kaylons. 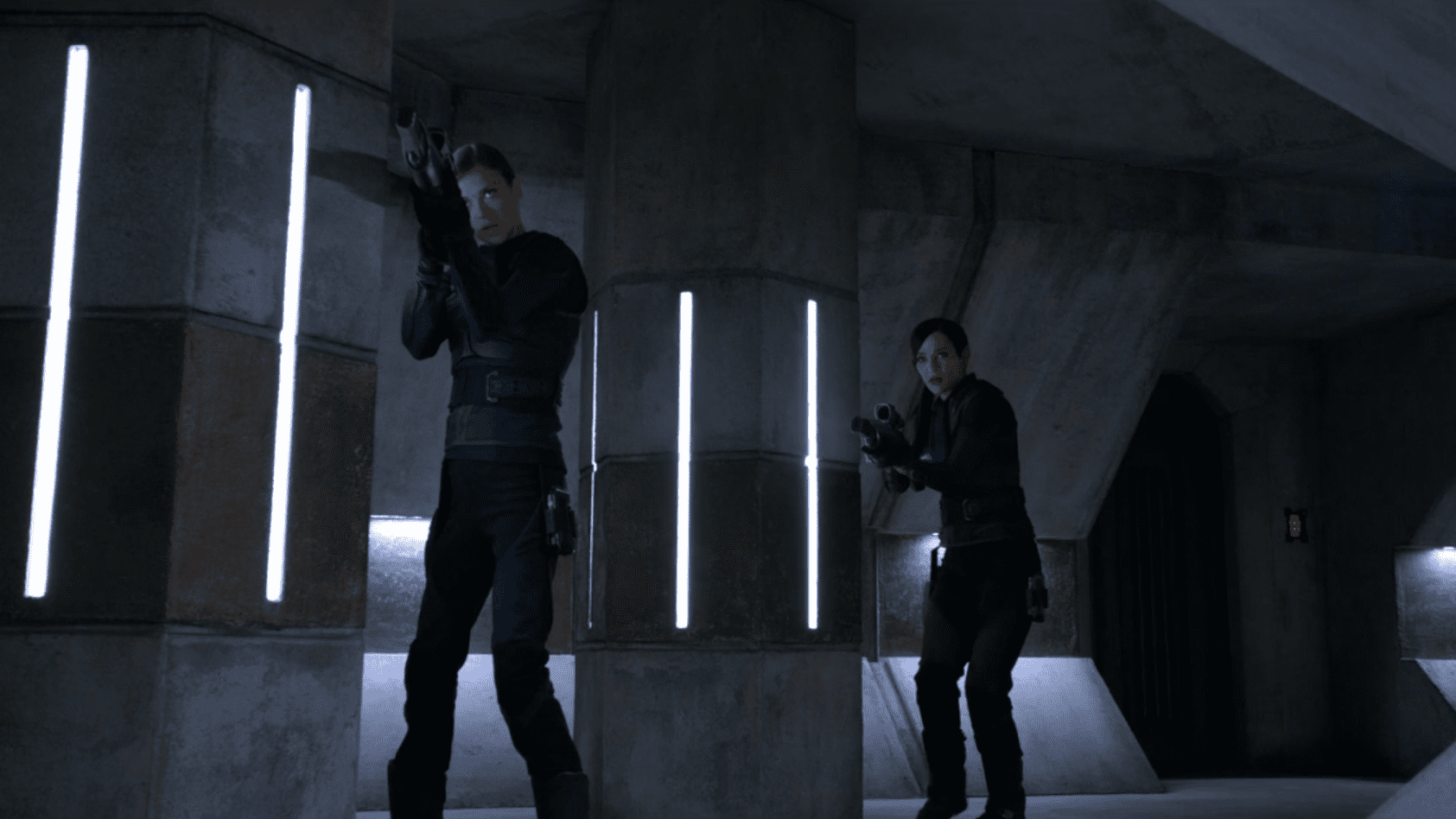 The action of “Domino” must be praised, as it is some of the best combat in The Orville and modern sci-fi. There are some classic callbacks to Star Wars and other sci-fi franchises, with epic dogfights, claustrophobic ground assaults, and personal hand-to-hand combat. All the action is incredible and tense, perfectly depicting the high stakes involved. The one problem comes from more of a meta sense. The episode resorts to the Hollywood classic “girl on girl fight” as good men are no longer allowed to fight bad women. Kelly and Teleya have shared virtually no screen time, so their “epic” confrontation has no cinematic or emotional teeth. It just comes across as weird, present in the episode only because of Hollywood’s rules regarding female characters. Ultimately, this decision can be overlooked as their fight is choreographed well and surrounded by so many great scenes.

The McGuffin of the episode, the weapon of mass destruction that can wipe out the Kaylons, first comes as an odd and perhaps damaging plot point. If it were not for the incredible sequences at the end that this weapon justifies, this easy “get out of war free card” would have been extremely unwarranted and immersion-destroying. However, because it facilitates the end of Charly’s arc and the interesting ethical dilemma of “Domino,” it is definitely a welcome addition. 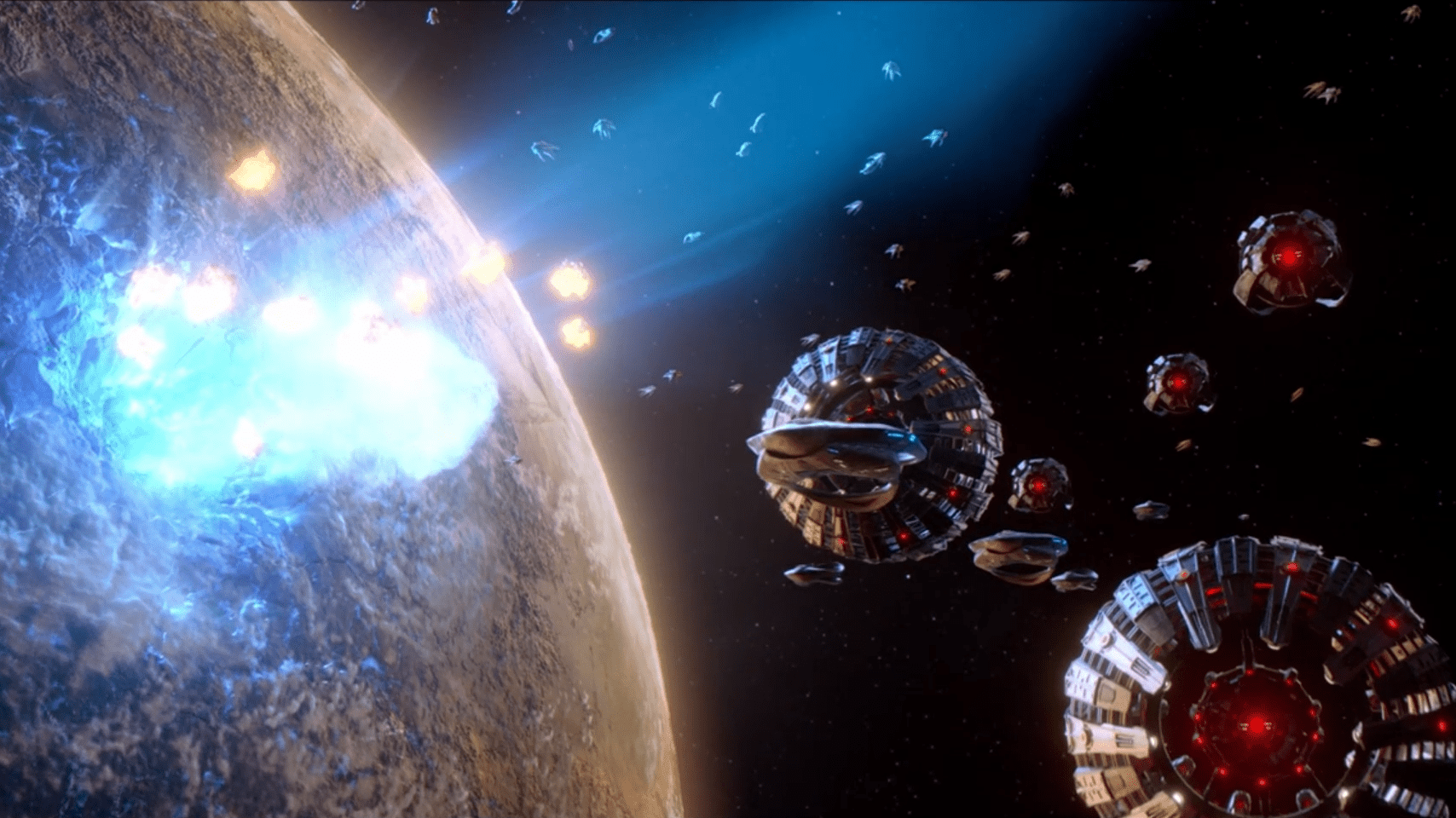 The most fascinating aspect of “Domino” is its multitude of surprises, all of which initially appear to be horrific choices before later being revealed to be genius. The choice not to make the Kaylons the final villains of the season is shocking, considering this conflict has been set up for over two seasons now. However, what must be remembered is that the Union is not a military organization and that they will strive for peace no matter what. Peace achieved through great personal sacrifice is the perfect solution to this conflict, considering the players involved and the type of show this is. No other resolution besides genocide would have truly solved the conflict, as the Kaylons would never stop and never tire of their hatred of biologicals otherwise. Between peace and genocide, peace makes the most sense for The Orville. As it stands, this initially controversial decision may be one of the best ones in modern sci-fi.

Judgment on whether or not “Domino” is the best episode of the season must be withheld until the upcoming finale, as all its great story and character beats could be annihilated. With the Kaylons defeated, it’s anyone’s guess what the final episode will center around, perhaps inciting more anticipation for it than there otherwise would be. The character work in “Domino” balances with some impressive action to create one of the best episodes of The Orville and modern sci-fi as a whole. Hopefully, the finale of New Horizons will live up to the high bar that “Domino” has set.

The character work of “Domino” balanced with some impressive action creates one of the best episodes of The Orville and modern sci-fi as a whole.