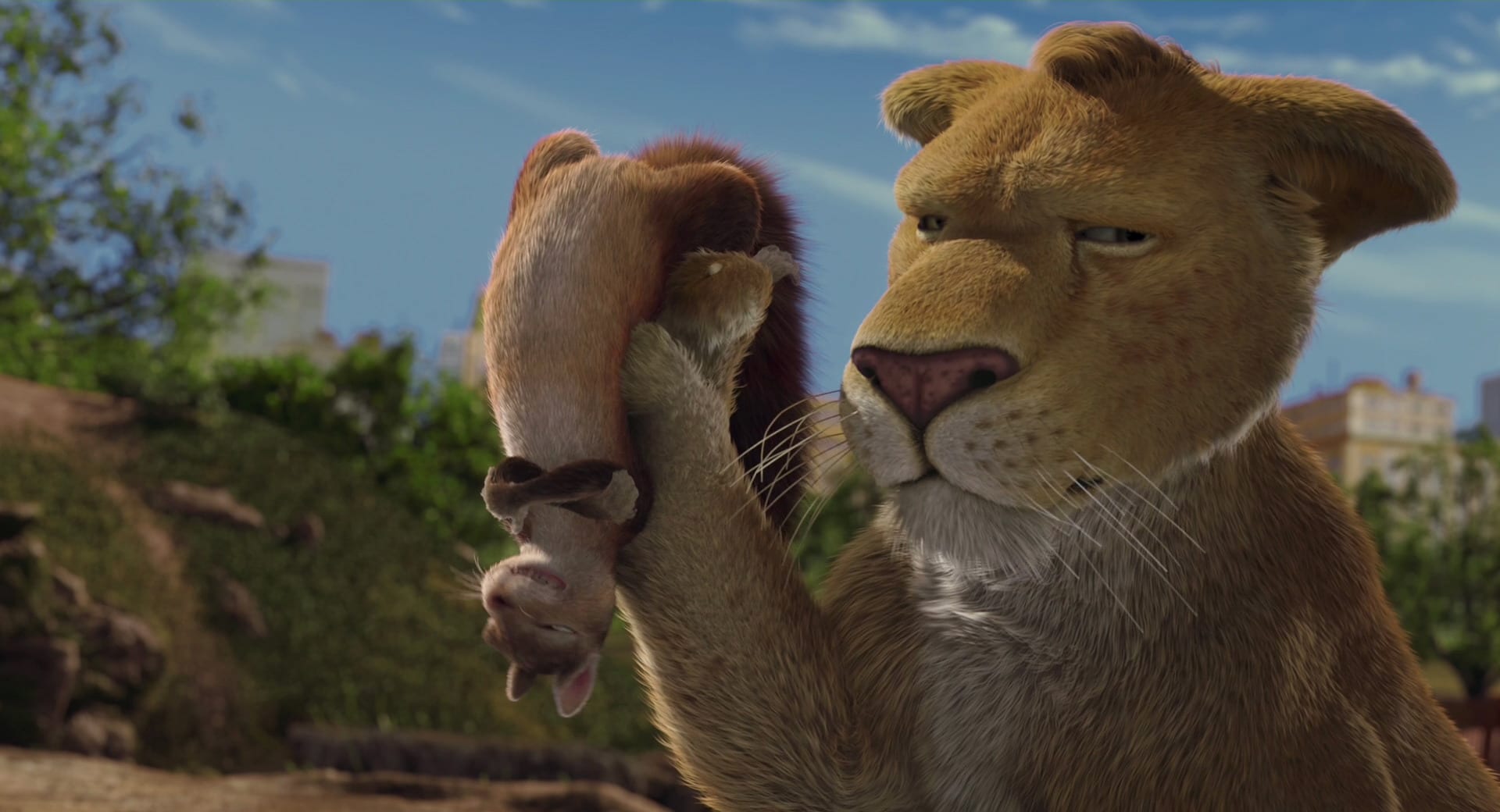 When I reviewed Madagascar a few weeks back, I was reminded of a similar movie that came out about a year later. The Wild was made by C.O.R.E. Digital Pictures, a Canadian CGI animation company. C.O.R.E. provided animation for movies like Beverly Hills Chihuahua and T.V. programs like Dragon Tales and Super Why. However, The Wild was the only feature film produced at C.O.R.E., rather than simply animated for another company. Disney held the U.S. distribution rights to The Wild, and for all intents and purposes, it was just marketed as a Disney film here. I saw The Wild in theaters when it came out, and I remember thinking it was a bland, unfunny Madagascar clone. However, it was actually the other way around. Madagascar made it to theaters faster, but The Wild went into production first. Jeffrey Katzenberg likely got wind of the basic plot and had DreamWorks cook up their own treatment. Ironically, in this case, the “rip-off” is the superior film in nearly every conceivable way. Madagascar spawned a multimedia franchise including sequels, books, multiple T.V. series and holiday specials, and more. Meanwhile, most people have completely forgotten The Wild ever existed, and it was C.O.R.E.’s sole film produced entirely in-house before they shut down operations in 2010. As I got to thinking about The Wild, though, I figured it couldn’t hurt to give the film another look after 15 years and the dissipation of Madagascar mania.

The Wild stars Samson the lion and his son Ryan, the latter of whom has yet to find his roar. This brings both lions shame and causes mockery from the denizens of the New York Zoo. After hearing all the stories of Samson’s adventures in the wild, Ryan decides to get a little wild himself and stows away in one of the crates being sent to Africa. By the time Samson and his friends figure out what has happened, the boat carrying Ryan is on its way, and they have to follow. Hijinks ensue, ranging from sewer crocodiles who give bad directions to Nigel the koala going crazy. Eventually, the animals make it to Africa, but all they find is more hardship, including unhelpful locals and a group of wildebeests who want to eat lions. Can Samson save his son, tell him his darkest secret, and teach him to roar? You know the answer; this is a kid’s movie and makes no attempts to be anything else. 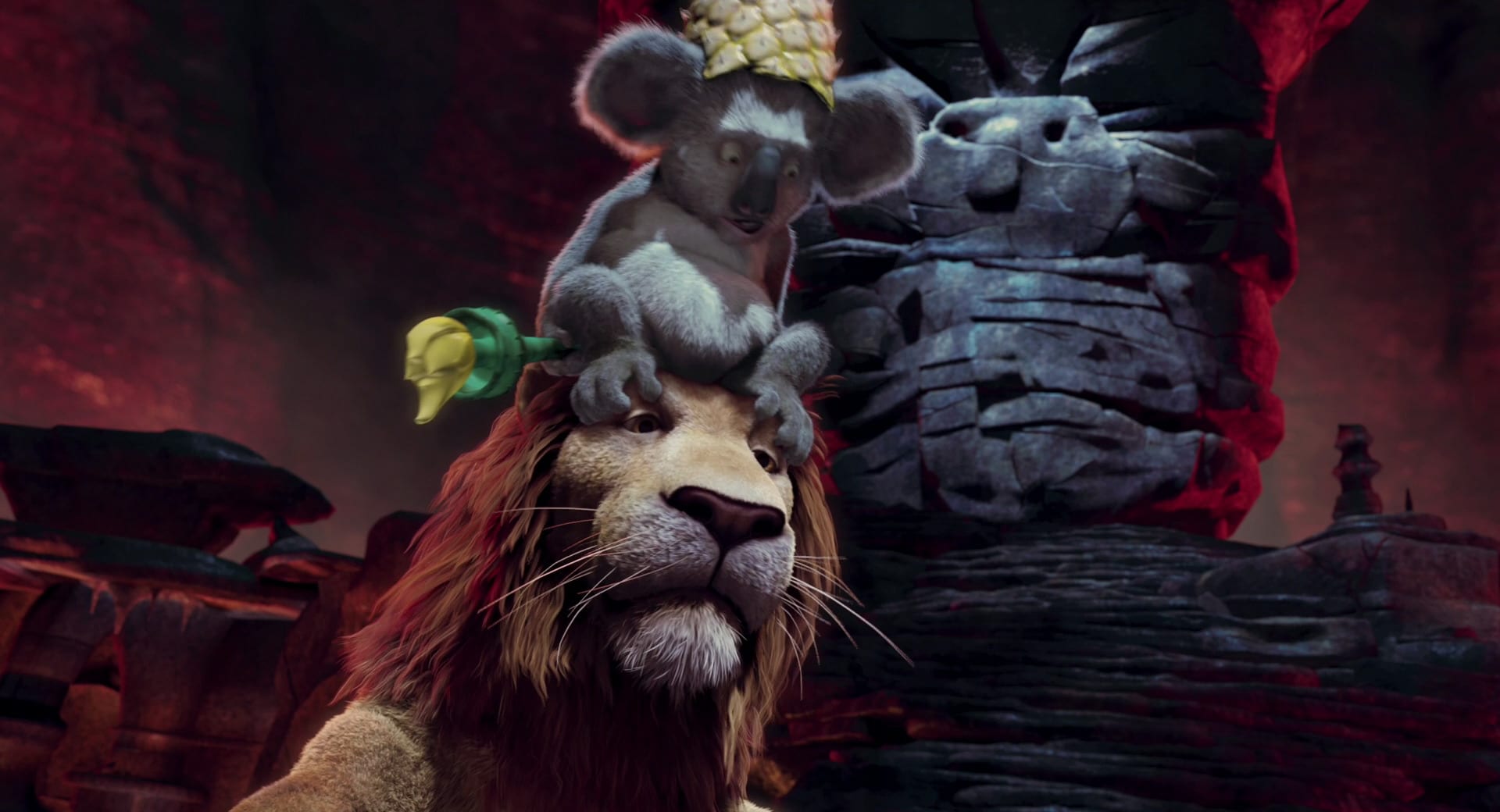 The plots of The Wild and Madagascar are pretty similar. However, this is still one area where Madagascar quickly takes the upper hand. The Wild’s story is too convoluted for the time it has and the audience it’s going for. There’s nothing for adults here; the characters are flat and unentertaining, the animation is ugly, and personally, I didn’t laugh at a single joke the whole time. Taking this into consideration, it would be nice if The Wild planned its story accordingly and removed all the extra steps and filler. The crocodiles aren’t funny; they’re just stereotypes of people who live in New York. There’s really not much for kids here, either. I certainly can’t imagine children wanting toys of these ugly, forgettable animals and the dull, desaturated world they inhabit.

One saving grace of The Wild is the cast. Kiefer Sutherland voices Samson, and he gives a good performance despite some pretty terrible dialogue. Jim Belushi and Eddie Izzard provide the film’s comic relief as Benny the squirrel and Nigel the grumpy koala. Jeneane Garofalo voices the film’s sole female character, Bridget the giraffe. Richard Kind plays the group’s wacky snake Larry, and the wildebeests are voiced by William Shatner and Patrick Warburton. The only performance I don’t care for is Greg Cipes as Samson’s son Ryan, and it’s not even really his fault. I know Cipes best as Beast Boy in both Teen Titans and Young Justice. As such, whenever I hear his voice, that’s what I hear. I don’t think his voice is youthful enough to be a helpless lion cub, and truthfully, I just found it distracting. While the cast itself is impressive, though, it does little to mitigate the less forgivable elements of The Wild. 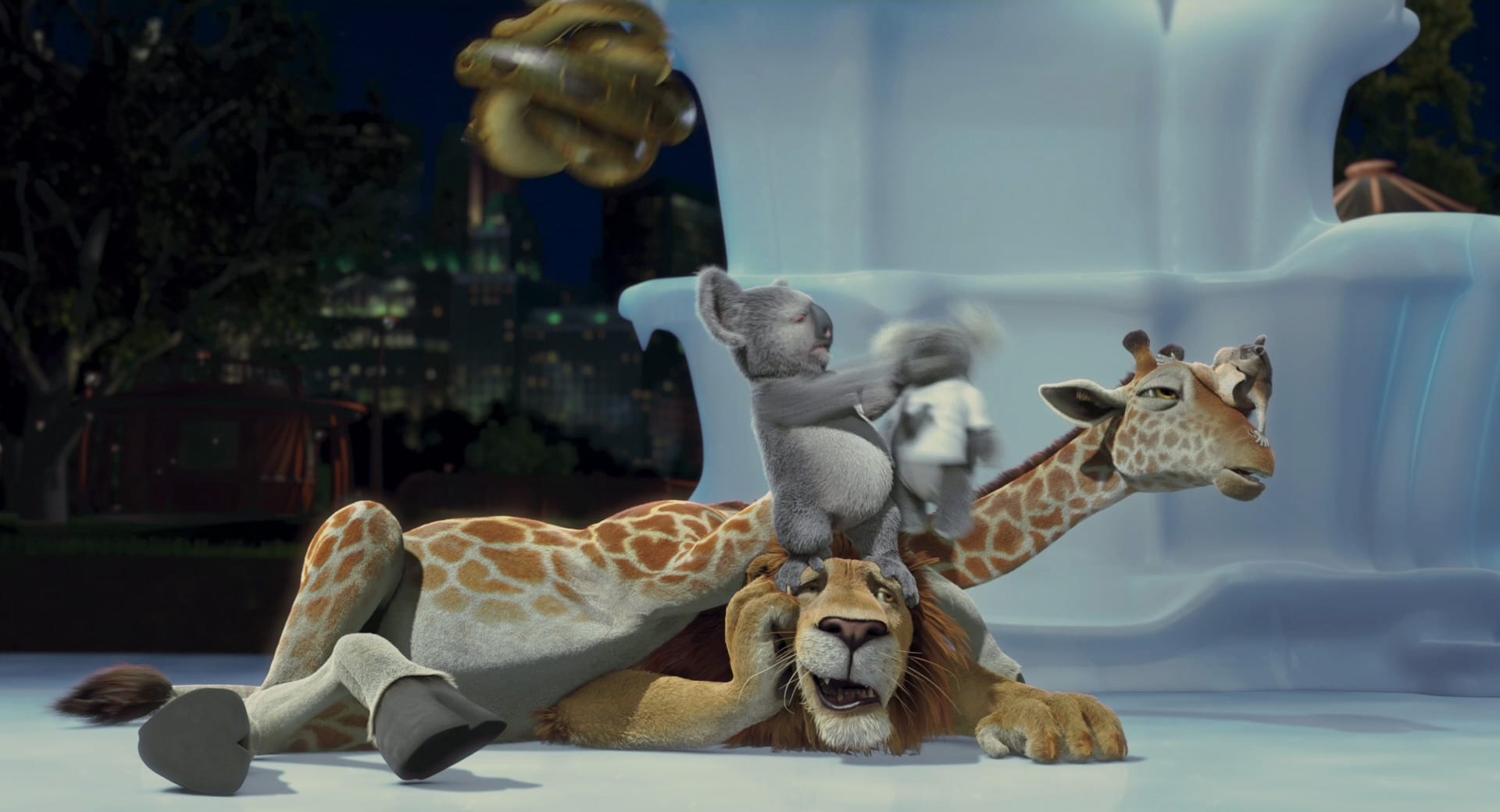 This film contains some pretty bad dialogue. The jokes are unfunny, but worse yet, we don’t get a good feel for the relationships between the characters. The worst offender is what could have been the movie’s greatest strength: the bond between Ryan and Samson. The film gives us very little time to become invested in their relationship. Even before Ryan leaves (which is fairly early on), the two are separated when Samson participates in a game of turtle curling. Meanwhile, Ryan sneaks off with his friends to goof off rather than attend the game as he promised. As a result of keeping the two apart even early on when we could see them interacting, we don’t get a good feel for their personalities and how they interact. I’ve seen movies do a lot with minimal time, but The Wild isn’t one of them. Samson’s connections to his friends don’t fare any better, not to mention a bizarre romance between Benny the squirrel and Bridget the giraffe. Benny spends the whole movie trying to win Bridget’s affections and is continually spurned. In the end, when they inevitably hook up after all, it’s because he acknowledges that she’s a strong, independent woman who doesn’t want to be defined by her relationship. For one thing, what an unfunny feminism joke; even if you’re going to joke about that, this isn’t how you do it. More importantly, this makes no sense in the larger narrative because Benny was never trying to define Bridget by their relationship. On the contrary, they had no relationship to speak of until then! The characters and relationships in this film are so poorly defined that most of the dialogue is just meaningless. 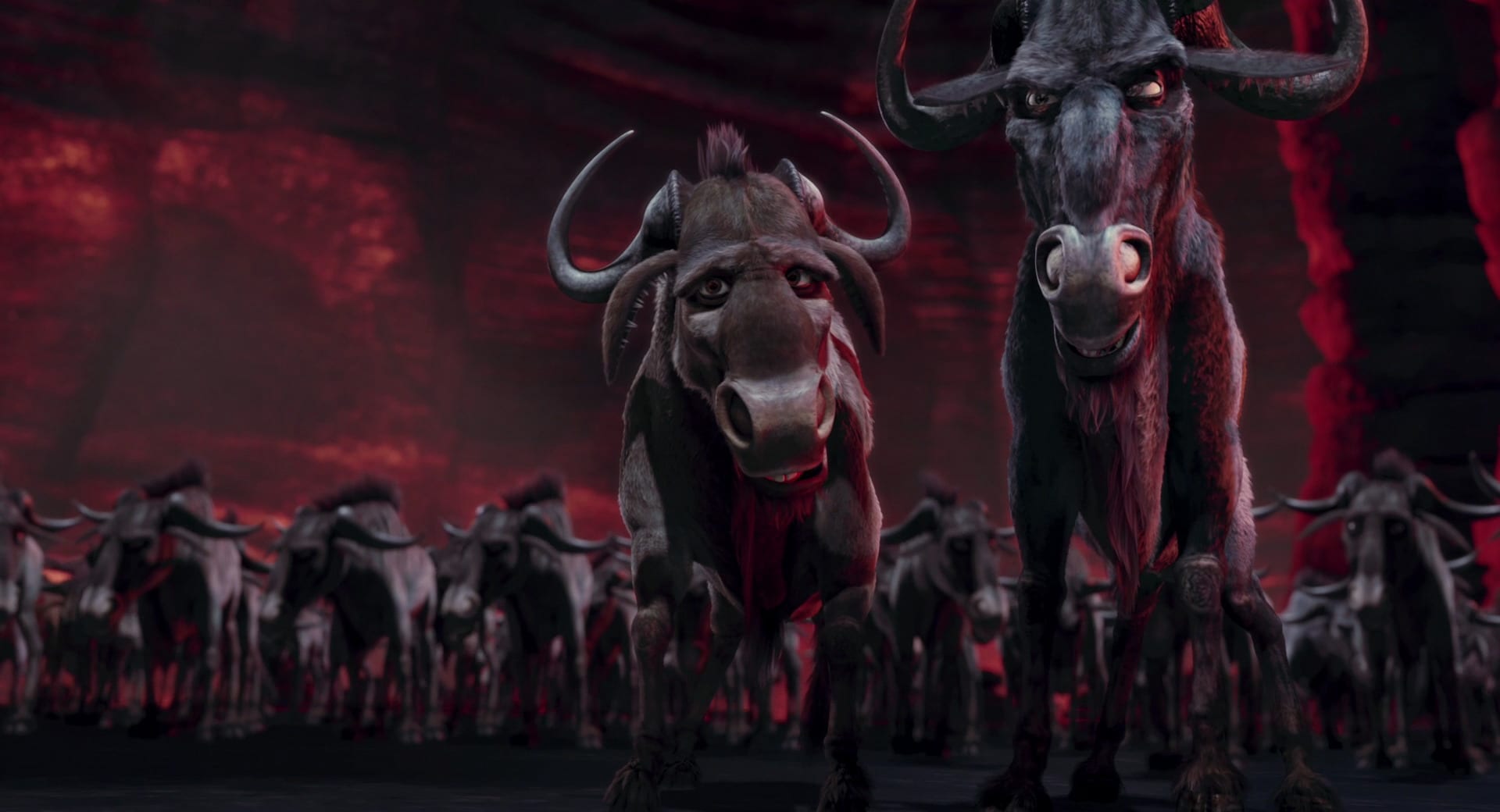 And let me tell you, the music and animation don’t help The Wild‘s case. The fur on the animals looks like felt, and their facial expressions are just downright unsettling. The underscore by Alan Silvestri is actually good, as is all of his work I know of. It’s not the best score I’ve ever heard, but it’s way too good for this movie. However, the songs used in The Wild boggle the mind. Eric Idle co-wrote the song “Really Nice Day” with Larry Mah and John Du Prez. I’m not sure why Idle was involved with this film, but he’s had terrible luck choosing movies outside of Monty Python. Shrek the Third? A turd. Quest for Camelot? Awful. The Wild? You know the rest. This song is irritating and repetitive; I honestly find it disgusting that three people were required to write it. The songs in the trailer are so much better than the ones utilized in the actual film.

The Wild is simply a mess. A stellar voice cast isn’t nothing, but it can’t carry an entire film. The Wild has ugly, unrefined animation, terrible choice in background songs, and a basic, uninspired script. I wouldn’t recommend this film to anyone, young or old. Even if you love bad movies, there are funnier, more interesting ones than The Wild out there.

The Wild has ugly, unrefined animation, terrible choice in background songs, and a basic, uninspired script. I wouldn't recommend this film to anyone, young or old.