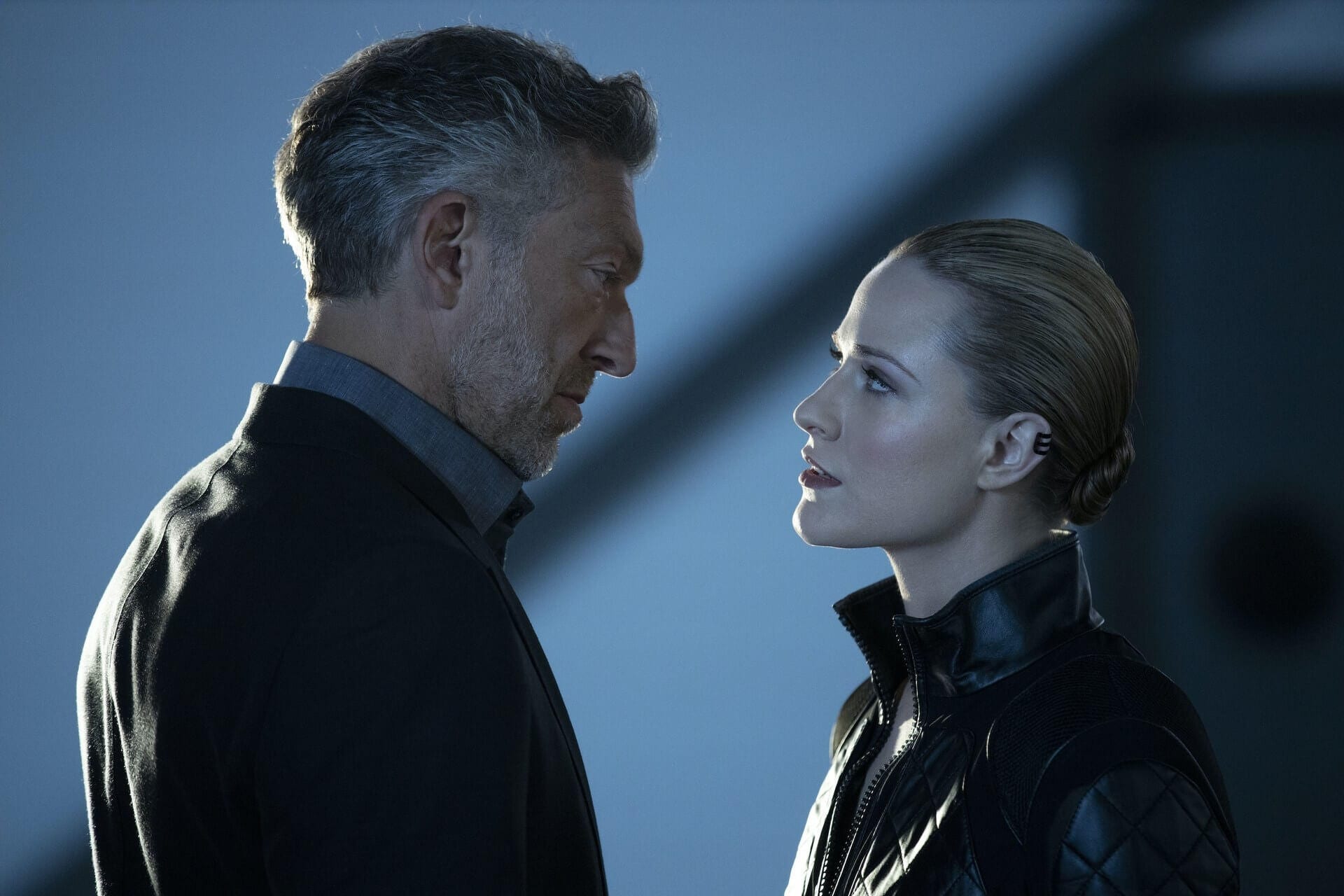 In “Genre,” Serac details his creation of a “God” in the wake of the destruction of Paris. He meets with the Brazilian President and warns him that changes are coming. In the past, Liam’s father decides to pull the plug on the Rebohoam project, prompting Serac’s brother to suggest that they kill him. In the present, Serac’s men offer him some bad news in the form of Dolores’ recent activity. Meanwhile, Dolores reveals her true self to Liam as she and Caleb seek his reluctant help. Liam drugs Caleb and he begins seeing the world in black and white. The three are chased, and Dolores instructs Caleb to shoot at the pursuers, at which he succeeds with flying colors. In the past, Serac loses control as his business partner uses the program for personal gain and people become harder to predict. In the present, Dolores releases everyone’s Incite profiles to them, which Liam warns will unleash chaos. Two gunmen attack Caleb, but Dolores jumps in front of him, taking the fire and simply zipping up her jacket. In the past, Serac’s brother is revealed to be in a mental hospital. Serac tells Liam’s father that his brother was planning on killing him. In the present, Ashley shows up and leaves with Bernard as one of Dolores’ copies, Martin, is collected by Serac’s people. Serac confronts him about the breach originating from his office, and Martin reveals himself to be the culprit, blowing up the building with Serac’s people in it. Meanwhile, Liam outlives his usefulness and one of Caleb’s friends kills him. In the past, Serac kills Liam’s father. In the present, it’s shown to be Dolores that Serac has been telling about his history. 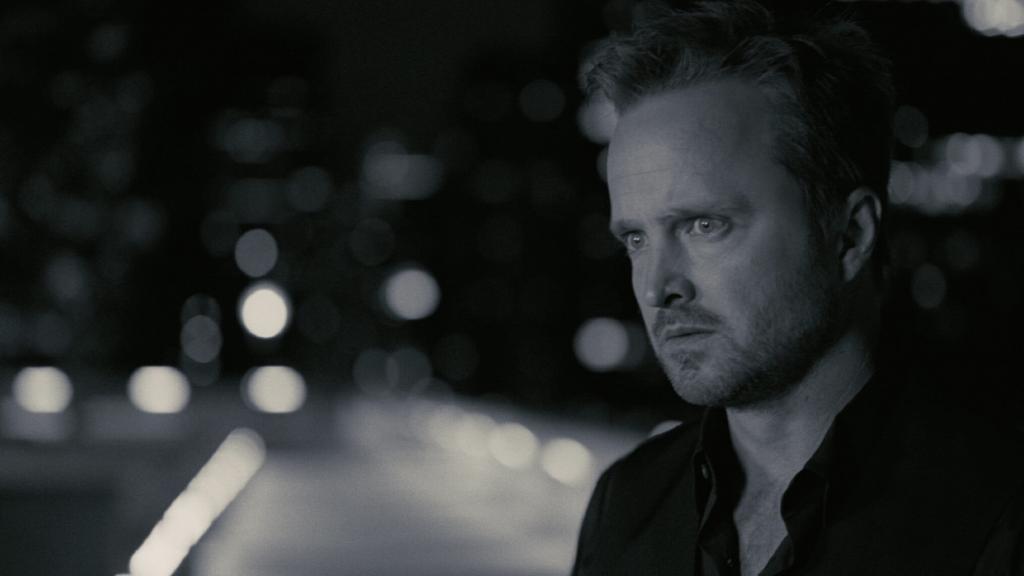 In “Decoherence,” Maeve tells Serac that she needs what Dolores has: help. He warns her that if she fails again, she won’t be going to the world in which her daughter resides. She wakes up in War World again, but this time, she can control the other hosts. Meanwhile, William attends a support group meeting in the mental hospital. He details his beliefs on God and humanity, and it’s enough to make another patient cry. Later, with his therapist, he muses that he doesn’t belong in the hospital; he should be in a “pine box” for what he’s done. His therapist receives the intel from the Incite data leak, and it prompts her to commit suicide. “Charlotte” brings her son to her ex-husband for safekeeping as she has to work, and people are rioting in the streets. He tells her that their future is up to them, not the Incite data. On her way to work, one of her fellow board members is killed by Serac’s people. She calls Dolores, who insists she go inside Delos and get the host-copying software, which Charlotte is afraid to do. She worries for the safety of her family, whom Dolores reminds her aren’t really hers anyway. Meanwhile, William is given a special pair of glasses that allow him to revisit his memories. He sees his abusive father and starts shaking and screaming. When the orderlies try to restrain him, he bites a finger off. Serac takes control of Delos and orders that all employees be tested for aberrations of any kind, suspecting that Dolores has one of her copies present. Charlotte begins copying the host data, and one of Serac’s men sees her, threatening to tell Serac. She kills him. William goes to a group therapy session, and there he’s greeted by younger versions of himself, as well as his father-in-law. Maeve reunites with Lee Sizemore, and Hector and finds a copy of Dolores from Serac. William is shown his childhood again, but this time, he’s revealed to be a sick bully, not an abused victim. Dolores tells Maeve that they’re both survivors, pointing out that Maeve’s friends have died for her and her daughter before. Charlotte has to run as Serac has discovered her true identity. Dolores clues Maeve in on her plan to eliminate her friends and then does so. William kills all of his past selves, declaring himself a good guy, just as Bernard and Ashley find him. Maeve’s copy is completed. Charlotte leaves with her family, but their car explodes a few feet down the road. Her family dies, and only she emerges, engulfed in flames. 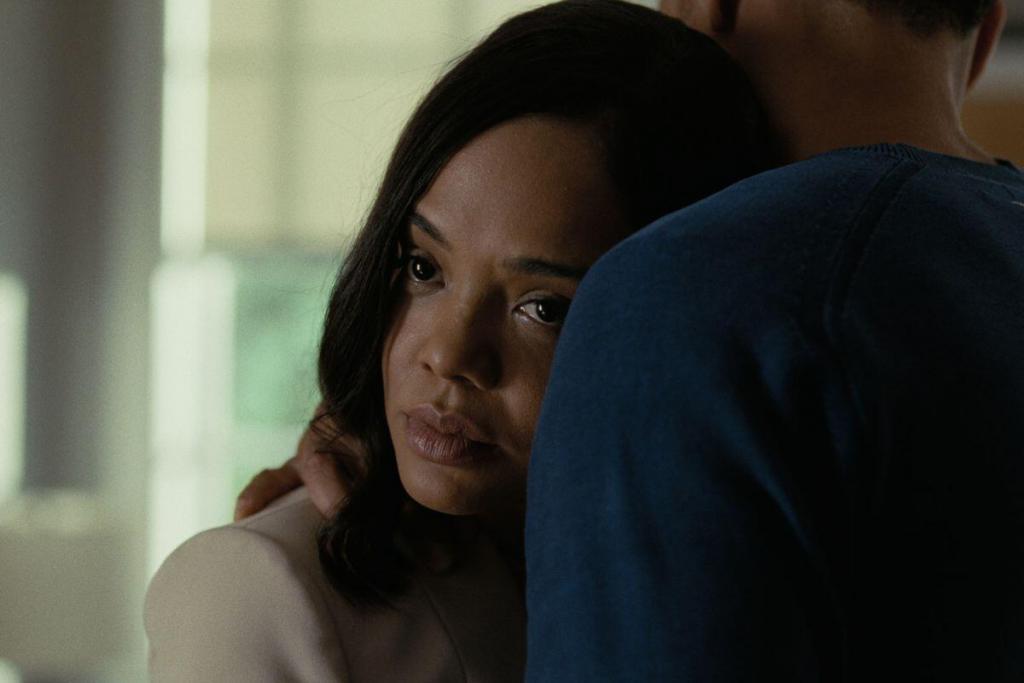 I feel like a broken record, but for the most part, I found both “Genre” and “Decoherence” a little dull. The acting is phenomenal all around, even from Tessa Thompson, who I don’t particularly like. Ed Harris is particularly captivating in “Decoherence,” and Vincent Cassel dominates “Genre.” I’m growing increasingly frustrated with the main characters and their storylines. So far this season, Serac and William are the only ones with anything interesting to do. I was interested in Maeve’s story at first; unlike Dolores, it is still possible to empathize with her on some level. I’ve also been wanting a showdown between the two characters since last season. However, I feel like Dolores and Maeve are overpowered to the extent that I don’t care what happens to them because I already know that it will either be temporary, not so bad, or both. I think we can safely add “Charlotte” (who should have been Teddy, and you can’t change my mind) to this category as well. There are things I like here, like Serac’s observation that she treats her family better than the real Charlotte Hale ever did. I was more intrigued before we knew she was a Dolores copy; this is an uninteresting development, and more importantly, this character never once behaved like Dolores would in any situation. It’s also troubling that this is yet another character that simply won’t die. They’ll kill side characters, like Charlotte’s colleague, Hector, and Lee’s copies, but not any of their strong female hosts. I’m not even saying I want them to die necessarily, just that all the near misses and resurrections take away any and all tension and fear for these characters. I also remain indifferent to the character of Caleb. He seems to exist solely to give Dolores a sidekick and act shocked when she takes several bullets without so much as a tear. I’m mildly intrigued by the union of Bernard, Ashley, and William. To be honest, I would have been much more so closer to the beginning of this season. It feels to me like the Westworld creators are spinning their wheels way too much this season, and impactful events are taking too long to happen. Cassel’s monologues in “Genre” are brilliant, but anything that’s currently happening and affecting the plot seems repetitive, dull, or both. 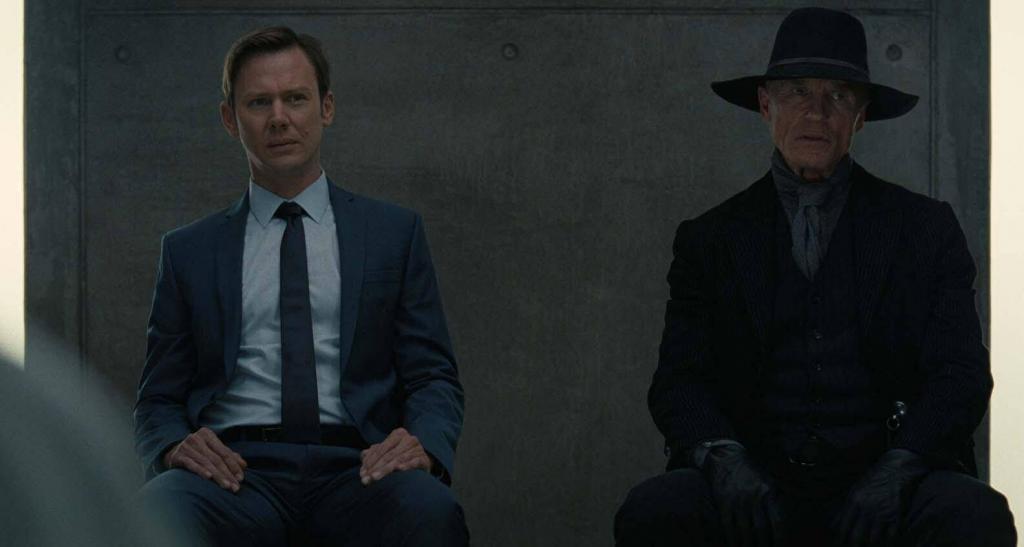 Overall, these are fine episodes. The filming is adequate, the music and acting great as always, but the plot mostly lacks. I’m very interested in seeing what happens with Serac and William, but honestly, I’m very disappointed in this season thus far. Hopefully, it gets better going forward.

Westworld remains a masterclass in actring, but that isn't enough to keep a boring show afloat once it's run out of good ideas.