Strange Bedfellows: We’ve Seen The Multiverse of Madness Before 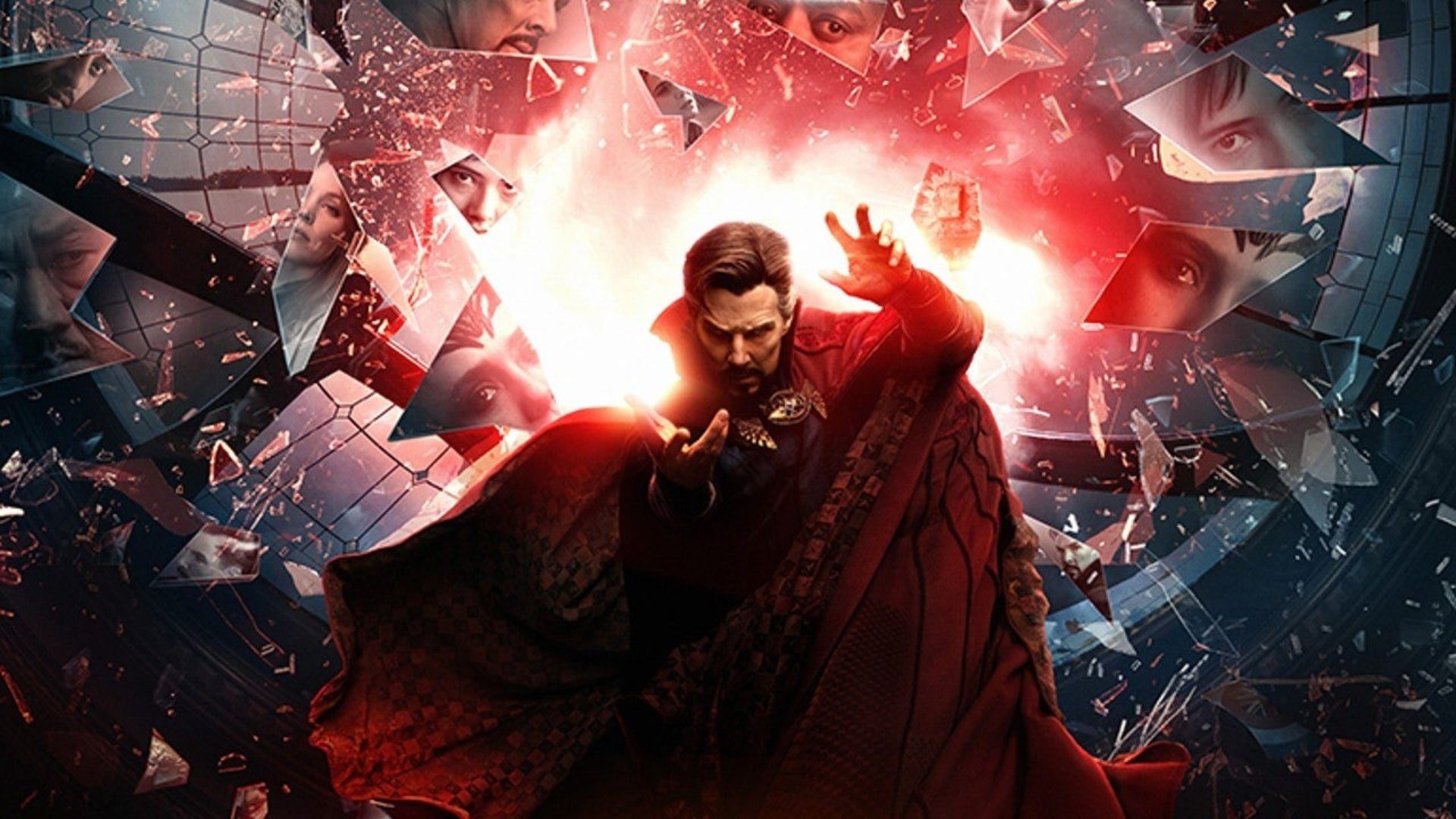 Watch enough movies, and you’ll start to see strange thematic bedfellows. I finally caught Doctor Strange in the Multiverse of Madness a few weeks ago in an attempt to learn one or two plot points and guest appearances from the film itself rather than Twitter. (There’s currently a pool going on when I’ll finally check out Top Gun: Maverick.) I enjoyed it; despite some problems, I liked the story, the choice of villain (something I didn’t think the MCU would do, but which desperately needed to be done), the Raimi-getting-his-Raimi-on filmmaking, the crazy horror/fantasy plot elements, and Doctor Strange’s character arc. But last night, I watched a movie I hadn’t seen in years and realized I had seen some of the themes and story elements explored in Marvel‘s latest big-screen venture before – in Star Trek Generations.

Star Trek Generations is a movie I think I like more than most people. (I’m not a huge Star Trek fan; I like parts of it, certain movies and TV episodes, but others bore me to tears, and still others are just okay.) Like Multiverse of Madness, it definitely has its issues, not the least of which is the constant goofiness from Data and his spiffy new emotion chip; a few of these gags would have been fine, and the subplot pays off, but after a while I really just want him to shut up. It’s also disappointing that the first scene with the Next Generation crew makes such a big deal out of Worf being promoted only to sideline him for the rest of the movie. But the film more than makes up for it with its exploration of Captain Picard’s humanity through his grief at losing the last of his relatives, a villain with an all-too-human plan and motivation, a cool space battle, and the meeting of Picard and Captain Kirk, with the two teaming up to save millions of lives.

*SPOILERS FOR BOTH MOVIES*

How do these two films connect? Through their shared theme – personal desire vs. self-sacrifice, choosing between living in a comforting fantasy no matter the cost or a harsh reality that will spare others pain. In Multiverse of Madness, Wanda – fresh from enslaving an entire town full of people to live out her dream life – has gone insane with grief and sets out to find a universe where her children still exist so she can spend her life with them. To get to them, she’ll have to murder a teenager, cut her way through wizards and various other heroes trying to protect the innocent from her mindless destruction, and maybe even destroy a couple of universes with her use of the mystical book The Darkhold. Her pain and loss have turned her into a murderous monster.

The same is true of Dr. Tolian Soran, the villain of Star Trek Generations. Soran is a refugee from a planet that was destroyed by the Borg (who would be the villains in the next entry of the movie series, Star Trek First Contact, which is excellent). He lost his family in the Borg attack but later found himself in the Nexus, a mystical paradise existing out of time and space where he could be with his family forever – that is, until an interstellar accident pulls him out of the Nexus and back into reality. Soran is desperate to return to the fantasy world the Nexus provides, and after decades of research, he’s finally found a way. Unfortunately, it involves teaming up with a pair of power-hungry Klingon sisters, sacrificing the Enterprise, and blowing up a planet with millions of inhabitants. Again, a villain fueled by grief is seeking to live in a paradise, cold to those who will die to make him happy.

Contrast this with the heroes of both films. Doctor Strange is reeling from the fallout of his decision to give Thanos the Time Gem in Infinity War. He made a difficult choice that led to a lot of pain for a lot of people, but it was the only way to save the universe from an all-powerful psychotic. Early in Multiverse of Madness, he’s faced with the loss others experienced when Dr. Nicodemus West, his old surgical rival, talks about how he was erased in the Snap, only to return to a dead brother and two dead cats. But Strange also suffers as he watches his great love, Christine Palmer, marry the man she moved on with while Strange himself was dust for five years. This is a man who understands sacrifice, and he’ll suffer the pain of hurting himself and knowing he’s hurt others to save lives. Wanda, his nemesis, does the opposite, attempting to annihilate more people than even Thanos did to be with her children, whom – in her world, at least – she imagined into being. She’s chasing a fantasy of a fantasy, while Strange is living with the reality of his sacrifice every day.

Throughout the film, Strange is faced with the actions of his interdimensional doppelgangers. According to the Illuminati, every version of him causes swaths of destruction, with the one from the Illuminati world having killed many with The Darkhold in his zeal to defeat Thanos. He later confronts another Strange, this one having murdered others because he wants to be with Christine – whom Strange loses in every universe. Strange’s two sins in every world are arrogance and selfishness; he is convinced only he has the answers to every threat his world faces, and he will keep the one woman he’s seemingly destined to lose. Is our Doctor Strange different? Yes; Professor Xavier can sense it in the Illuminati scene, and Strange slowly comes to realize it. Our Strange is willing to relinquish power to America Chavez, willing to put himself at great risk using dangerous spells that could result in his eternal damnation, and willing to forgo a relationship with Christine in another world to continue protecting this one. He’s not the monster his doppelgangers are, nor the one Wanda became in this dimension; our Doctor Strange is a hero.

Picard finds himself in the same boat as Strange in Generations. Early in the movie, he learns that his brother and nephew died in a fire. Not only has he lost two people he loved and the last two members of his family, but he’s facing a future where he will likely never have a wife and children, and through them, the continuation of his lineage. But the Nexus gives him a world where he’s got all of that; he’s married with children, and his nephew is alive and well, the same loving boy with a bright future ahead of him. But Picard knows it’s merely a dream made possible by the Nexus, one that came about because he failed to stop Soran from blowing up a planet – not to mention the Enterprise and its crew, his crew. Are all those deaths worth the promise of the life he never thought he’d have, even if it is artificial? Kirk, too, is at peace in the Nexus, and he’s ready to keep it that way, to live as a happily married man instead of a Starfleet captain with no home but the untamed cosmos. But he finds the Nexus a lie in more ways than one; not only is his second chance a fake, but it isn’t what he really wants – he wants to be a hero, to “make a difference.” And so, both captains prove why they deserve their titles by giving up the dream to save the reality.

Things don’t play out exactly the same way in Generations and Multiverse of Madness. While both have heroes that make personal sacrifices for the greater good – embodying a phrase from an earlier Star Trek movie that revolved around sacrifice – Generations goes a step further than Multiverse of Madness, having Kirk ultimately give his life to save the world. (A lot of Star Trek fans feel that Kirk’s death is ignoble and unbecoming of his stature in Trek and pop culture; years later, Disney would buy Star Wars and say, “Hold all of the beers that have ever been fermented.”) The contrast is even starker with the villains. Wanda, when forced to see the horror show she’s become through the eyes of the children she sought to tear from their real mother – I guess; they don’t explain whether the kids are real or mystically created in the other universes, although I assume they must be real – chooses to stop her crusade and destroys every version of The Darkhold across the multiverse, seemingly (but probably not really) killing herself in the process. Soran, however, is steadfast in his determination to re-enter the Nexus by any means necessary, forcing Picard to do away with him – or, more accurately, trick him into bringing about his own demise.

And that is what makes this comparison so fascinating. This is largely the same story being told in two vastly different franchises through characters who react differently and learn different things from their experience (beyond self-sacrifice for the heroes). And their themes of honor, duty, and what it means to be a hero are universal. The adage about there being no new ideas has some weight to it, but so does the insistence that it’s all in the execution.

Huh, I can’t believe I didn’t notice this.

Strange things occur to you when you’re watching Star Trek late at night.

I haven’t seen Generations in a long time but this is very interesting.