Remember that classic Silver Age comic where Robin shot a guy in the face while snapping someone else’s neck? Yeah, me neither. But maybe, just maybe, you are blissfully unaware of the storied history of the adolescent collective of crime-fighters better known as the Teen Titans. Now, hold up; I’m not criticizing. We all start out knowing nothing about a given superhero (or team of them) when we first see them on television, in comic books, etc. For myself, when I picked up my very first comic book from one of the “Big Two” (it was Flash #0, “The Beginning of Tomorrow”) when I wasn’t old enough to even qualify for the teenage team, I knew nothing about the Flash beyond what he looked like and that he could run fast. But before I dash ahead of myself, this isn’t a Flash article; that was merely a matter of example. It’s time to talk Titans, or Teen Titans, rather.

The original Teen Titans team – in its base iteration anyways – had humble beginnings, debuting in The Brave and the Bold #54 in July of 1964. The team began as merely a trio team-up consisting of then side-kicks Robin (Dick Grayson), Kid Flash (Wally West), and Aqualad (Garth), who were invited to the suburban hamlet of Hatton Corners by the mayor’s own son in order to help solve an ongoing dispute between the town’s adults and its adolescents. Their menial task soon evolves into that of locating and rescuing the teens themselves from a vengeful descendant of one of the town’s founders, Mister Twister. Successful in depowering the villainous elemental magic wielder, the three decide to form their own team in the vein of the Justice League of America. With the blessings of their respective mentors, Batman, Flash, and Aquaman, they form the Teen Titans. Before long, they added the Themyscira-raised Donna Troy (Wonder Girl), and Roy Harper (Speedy – later known as Arsenal and Red Arrow) the protégé of the Green Arrow. The team only grew more from there, with a number of cast members rotating in and out, including empath Lilith Clay (Omen), who would also be a part of the matured version of the team, the Titans, in DC’s Rebirth continuity.

Upon receiving a psychic call for help from a girl they would come to know as Raven, the team of Robin, Kid Flash, Wonder Girl, Starfire, Beast Boy and Cyborg banded together. Raven assembled them to help her defeat her father, the demon king Trigon and, as a result, formed the New Teen Titans. Incidentally, this variation of the team, as well as the story arc that resulted in its creation, is the closest thing to the upcoming DC Universe service exclusive live-action series, based on what little we know of the show’s story and team composition. (We’ll have more on that in the coming months!) The Teen Titans have had a multitude of varying amalgamations over the years; not quite Justice League of America variance, but, nevertheless, quite a few. Members would outgrow the requisite age for being a part of the team and move on to either do their own thing or become a part of the adult Titans team. In some cases (as I’ll talk more about below) older Teen Titans members would pull double-time from their other duties and help to lead and train the next generation of Teen Titans.

The different continuities within the DC universe can cause some confusion as to what teams came together when and with whom, but I’ll endeavor to make some sense of it for you here. For the sake of simplification, I’ll be listing only the primary or core team compositions here, to be expounded upon at a later date. The continuities we’ll be going through are as follows:

The original Teen Titans team, as mentioned above, was initially comprised of Robin (Dick Grayson), Kid Flash (Wally West), Aqualad (Garth), Wonder Girl (Donna Troy), and Speedy (Roy Harper), but would also go on to include Terra and Omen (Lilith Clay). As members grew out of their rolls or fell in battle, the team would add Raven, Starfire, Cyborg, and Beast Boy. This team also would have multiple run-ins with the mercenary Deathstroke. When most Teen Titans fans hear the team name, this tends to be the model that they think of. It also is the team that set the framework for what future Teen Titans squads would look like, whether or not the individuals behind the masks were the same. 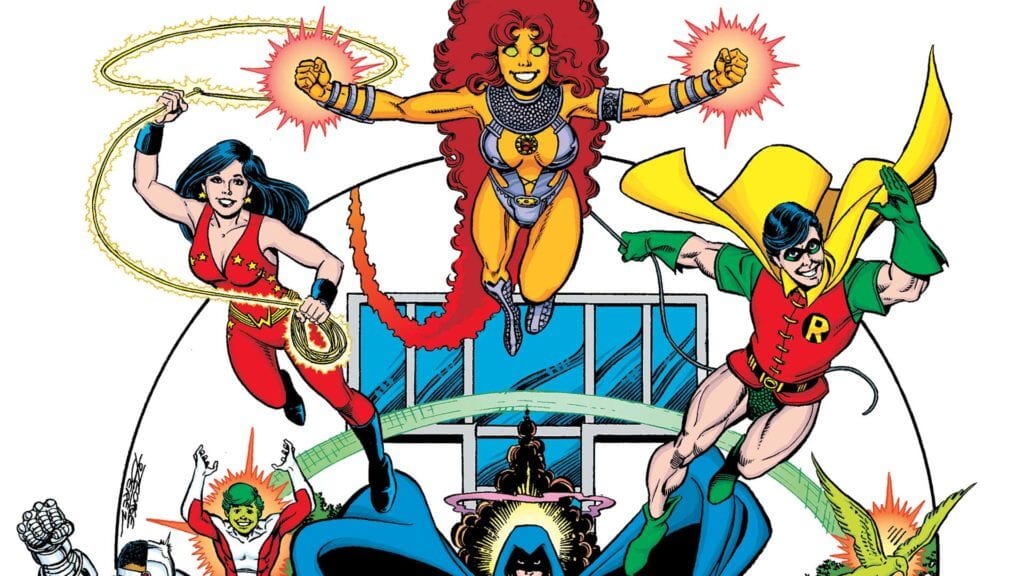 Realizing that there were a number of young crime-fighters cropping up all over the United States, former core New Teen Titans members Starfire, Beast Boy (Gar), and Cyborg (Victor Stone) felt that it was high time for a new generation of Teen Titans to emerge. Inaugurating the San Francisco-located Titans Tower, and by invitation only, they established a weekend club of sorts to help train the young heroes outside of their normal sidekick duties. The newest group of teens included: Robin (Tim Drake), Impulse (Bart Allen), Wonder Girl (Cassandra Sandsmark), and Superboy (Connor Kent), with Raven assisting to an extent. During the A Kid’s Game story arc, the inexperienced teens face off against Deathstroke, who quickly establishes his goal of clipping the wings off of this new Teen Titans team before it has a chance to get off the ground. He proves his resolve by not only out-classing each member but adding insult to injury by firing a point-blank shotgun blast into Impulse’s knee. The story turns into a growing pains moment for the youngsters, and by the end of it, have grown to trust one another and earned the respect of their elders. 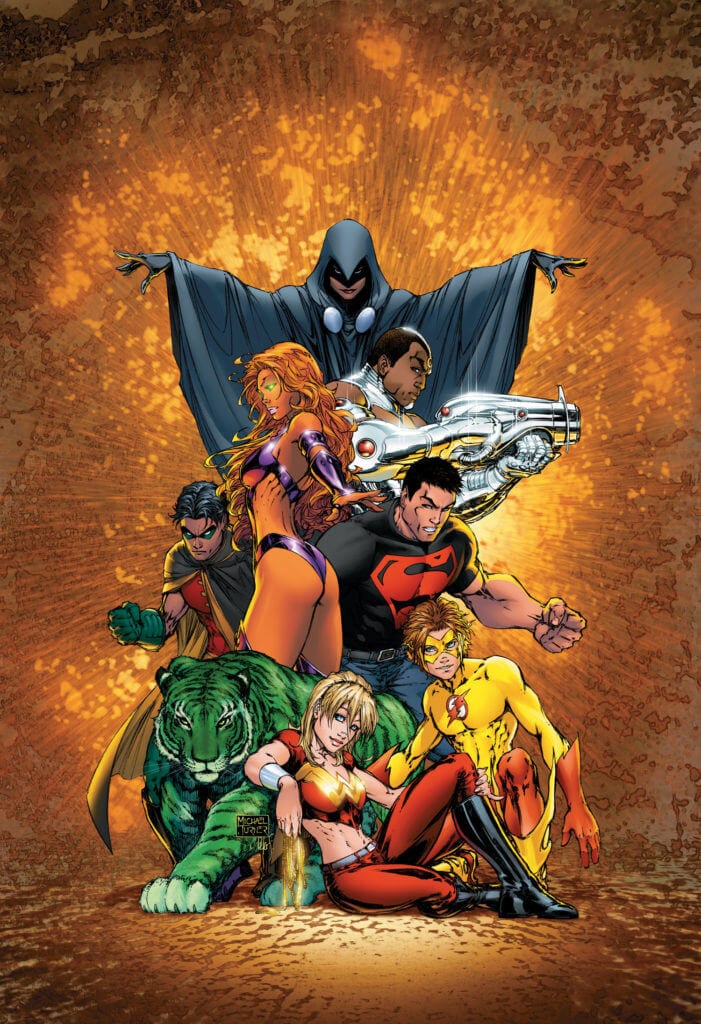 In the post-Flashpoint, rebooted continuity known as the New 52, everyone had lost 10 years and, additionally, the memories of the Teen Titans and Titans had been erased from the minds of everyone who had known about them. As a result, when Red Robin (Tim Drake) decided that he should establish a team of teenage heroes to investigate and combat the current epidemic of young metahuman kidnappings, he was unaware that there had, in fact, been a Teen Titans team prior. Red Robin worked to recruit Kid Flash (Bart Allen – Bar Torr), Wonder Girl (Cassandra “Cassie” Sandsmark), Solstice (Kiran Singh), Skitter (Celine Patterson), and Bunker (Miguel Barragan), as well as recruiting the N.O.W.H.E.R.E.-created Superman clone Superboy (Kon-El), who was initially ordered to kill the newly-formed Teen Titans. The New 52 Teen Titans were a source of much controversy amongst fans, as many (most) found them to be a far stone’s throw from the look and feel of the adolescent teams they grew up with. 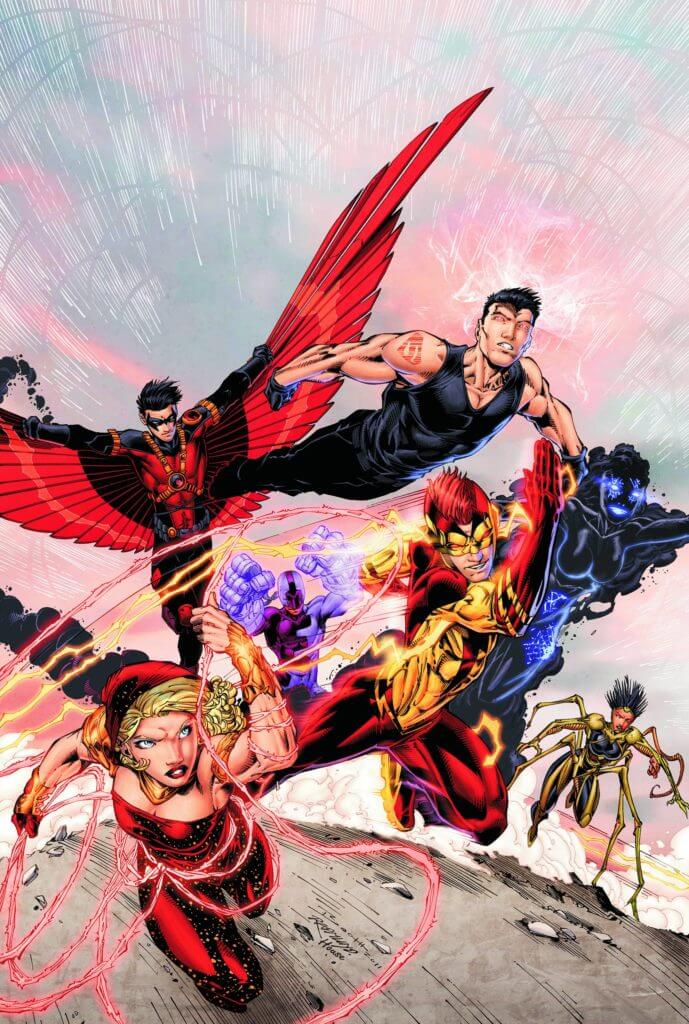 Upon turning thirteen, Robin (Damian Wayne) was determined to put together his own Teen Titans collective to help him defeat a group of metahumans from the League of Assassins known as “the Demon’s Fist.” After incapacitating and capturing Kid Flash (Wallace West), Starfire, Raven, and Beast Boy, Damian explained his plan and offered to the group that individually they’re all weak, but together can accomplish anything. He also informed them of the Demon’s Fist and their goal. Monikered after their namesake, the Demon R’as al Ghul, the assassins’ objective was to kill each of Damian’s metas to achieve the rank of fully-fledged assassin themselves. After narrowly escaping a surprise assault by the assassins, Damian leaves the group and sets out on his own to the League of Assassins’ hideout on Infinity Island to face his fate. The rest of the group catches up to Damian, and the newly formed team manages to defeat their adversaries and are given the blessing of his father, Batman, to operate as the newest Teen Titans. Shortly thereafter, metahuman Jackson Hyde struggles with his identity and place in this world and promptly sets out for the San Francisco Titans Tower in hopes of finding his place there. After proving himself to Robin – who had at first rejected Jackson’s desire to join the team – by defeating the villain King Shark, he’s given the chance to join the Teen Titans as an experiment, eventually obtaining the blessing of Tempest (Garth, formerly the original Aqualad) to take up the Aqualad mantle. 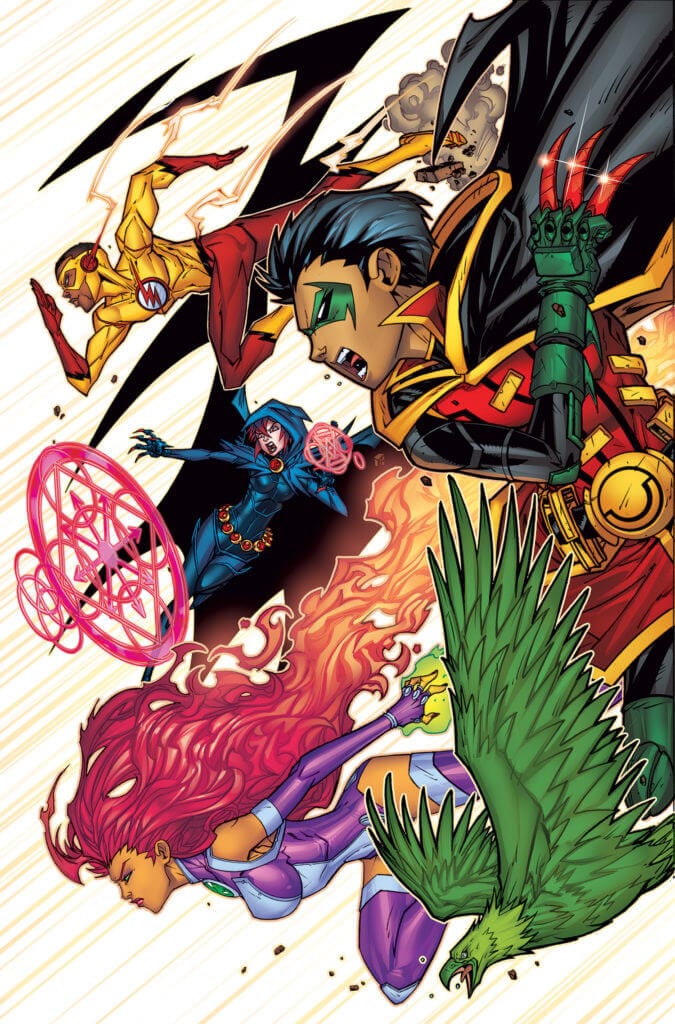 So, there you have it; an exceedingly brief overview of the Teen Titans over the years. As stated previously, within each of these core teams there were a number of members who rotated in and out for various reasons. In the future, we’ll be diving much further into each main Teen Titans team’s makeup and history. With the DC Universe multimedia streaming service just around the corner this fall, no doubt many questions will arise in the minds of those who watch the new Titans live-action series. The upcoming show will likely take nods from other DC comics-inspired TV shows and therefore will possess elements of several Teen Titans runs. That said, based on the initial trailer we saw at San Diego Comic-Con this year, it is a safe assumption that the show will be heavily influenced by the New Teen Titans run. Tweet me @PerilousFate and let me know which team you want to hear more about first!