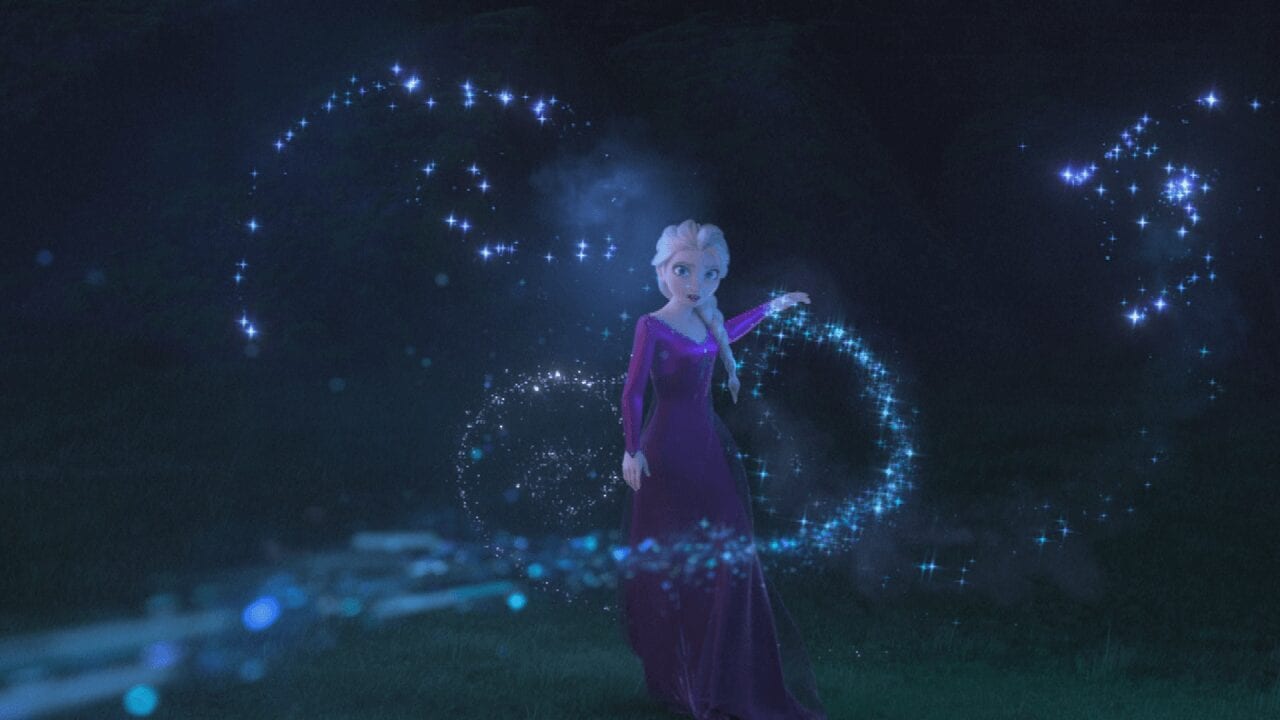 Munir: To coincide with the first day of fall, Disney has released what appears to be the final trailer for Walt Disney Animation Studios’ 58th film, Frozen II, which opens in less than two months from now. After two brilliant teaser trailers that showcased beautiful animation and a stirring score, this new trailer explains more of the story but still maintains an air of mystery. The trailer opens with a flashback to when both Anna and Elsa were still kids, and it seems to be before Anna’s accident that led to their separation in the first film. King Agnarr (voiced by Alfred Molina, replacing Maurice LaMarche from Frozen), the girls’ father, appears much more sympathetic here than in the original. He tells them a story about an enchanted forest where something bad happened and how now, no one can go in there. Their mother, Queen Iduna (voiced by Evan Rachel Wood), gives them a worried look before exiting the room. We cut then to the present, where Elsa (voiced again by Idina Menzel) is hearing mysterious voices, and a strange and threatening power comes to Arendelle, making everyone flee. Grand Pabbie (Ciarán Hinds) tells Elsa she has to listen to the voices and go to the forest to discover who or what is calling her. Naturally, her sister Anna (Kristen Bell), Kristoff (Jonathan Groff), Olaf (Josh Gad), and Sven go with her and discover what lies in that enchanted forest.

The trailer appears to be consistent with the previous teasers in that it shows a darker theme and a dangerous path for the protagonists. We meet new characters (such as Lt. Matthias, voiced by Sterling K. Brown), and we see mysterious rock creatures who may or may not be evil. The animation, again, is stunning, and while no song was featured in the trailer, the musical compositions gave an epic sense to the whole thing. Overall, I think it’s a solid trailer and is consistent with the excellent marketing campaign Disney has been doing for this film. What do you think, Virginia?

Virginia: I think the animation is even more impressive in this trailer than the previous ones. The rock monsters could be cool, but they seem a little similar to both Elsa’s snowmen and the trolls. I’m intrigued by the new character of Matthias, who I hope isn’t another plot twist villain, and even more so by the casting of new, impressive actors for the King and Queen. I think Anna got some really neat moments in this trailer, such as when she tells Elsa that she believes in her more than anything, and when she takes that huge leap. In a way, it feels almost like the filmmakers are trying to redeem Agnarr and Iduna after many people perceived them as abusive parents at the beginning of Frozen. Regardless, I really can’t wait to see this movie.

M: Agreed. Maybe here we could see more of the King’s motivation to essentially lock Elsa up until he died. We could also see more of the Queen, who was barely a character in the first one. You make an interesting point about Matthias, and I really hope you’re right. I’m tired of that secret villain trope that has been overused since the first film premiered. Talking about the casting, indeed it’s very good, but a name that hasn’t appear is Alan Tudyk’s. Perhaps he has a much smaller role, or he is not in the film altogether. If so, this would be the first time he wasn’t in a Disney animated film since he got cast as King Candy in Wreck-It Ralph. What do you think?

V: I would imagine he might be playing a minor character or a surprise one. I doubt they would exclude him; even in Ralph Breaks the Internet, since his character in the first movie died, they wrote him a new one. I’m really excited to see these new lands shown in the trailer, and I’m very curious about the humans we see led by the old woman.

M: Me too. The first film was limited to Arendelle and the mountain where Elsa secluded herself. Now, we are going to see more lands, and the forest looks equally mysterious and dangerous. Another thing that I noted is that none of the songs were used in the trailer. In contrast, the final trailer for the first film had “For The First Time in Forever” playing in the background. While I would’ve liked to hear a song, I also like that we are going to be surprised by them when we watch the film.

V: I agree; before Frozen hit theaters, I had actually listened to the entire soundtrack. I’m excited to be surprised by the music in Frozen II, and I hope the quality is more consistent than in the first film. Personally, I also hope that this film doesn’t have a song as misguided and over-played as “Let it Go,” but time will tell. I’m intrigued by Grandpabbie’s speech in the trailer about the seductive quality of magic. They’re clearly aiming for a more mature view of the fantasy elements than the original film or, indeed, most Disney films.

M: I think there’s a song called “Into the Unknown,” which seems to be poised to be the new “Let It Go.” I also like the darker tone, but I hope people don’t think it’s going to be a dark film in the literal sense. This is a Disney film, after all, and, as we can see at the end of the trailer, Olaf will be there supplying some humor to it. Since I like him, I don’t mind that, but I hope it’s a consistent tone. I don’t want a Hunchback with gargoyles thing. 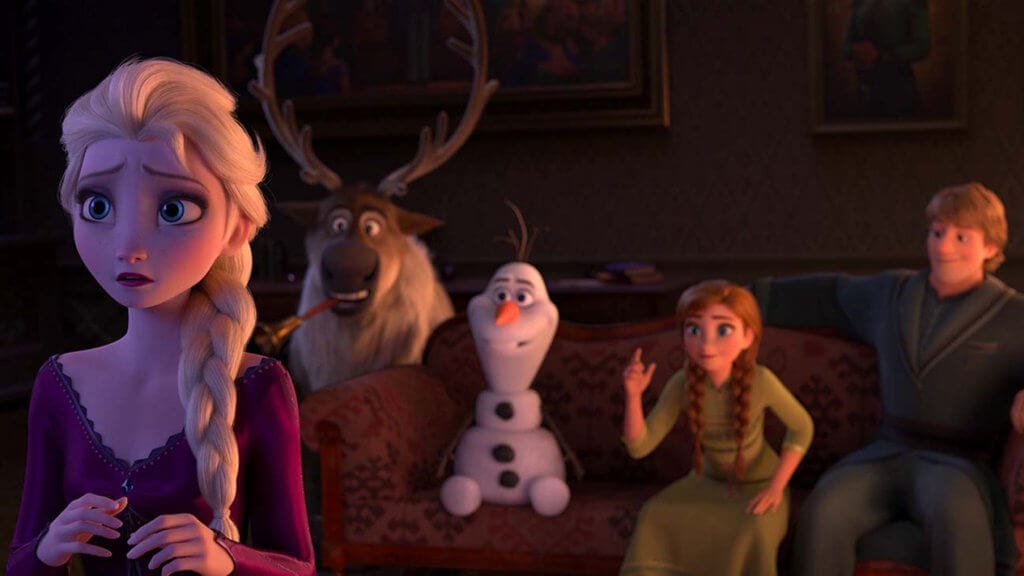 V: The first Frozen could be tonally uneven, such as putting “Fixer Upper” and the troll wedding in when Anna is literally dying. This is one aspect I’m hoping to see improved in the sequel. I actually didn’t mind most of Olaf’s comedy in the original, so I imagine he’ll be funny this round too.

M: To wrap up, what were some of your favorite scenes from the trailer? I like all of Elsa’s scenes with magic, particularly when she’s taming that water horse. I also love Anna’s line, “I climbed the North Mountain, survived a frozen heart, and saved you from my ex-boyfriend.” It was both funny and telling of how brave Anna is without being on the nose. Also, is she the first Disney character that has an ex-boyfriend, aside from Meg? I mean in the canon, excluding direct-to-video sequels, so Pocahontas doesn’t really count. But it’s a funny and interesting aspect that these characters have a past love life instead of marrying the first guy or woman that appears.

V: It depends on if you want to count Edward, Robert, and Giselle from Enchanted. They’re not animated for the whole film, but they were all involved in relationships before they really “fell in love.” As for favorite scenes, I really liked the bits involving Agnarr and Iduna. I can’t wait to see what they do with these characters. I also liked when Anna and Kristoff were discussing Elsa’s behavior and most of Anna’s scenes in general. She’s my favorite character in the original Frozen, after all.

M: What did you think of Frozen II‘s trailer? Let us know in the comments and don’t forget to check out the film on November 22nd!