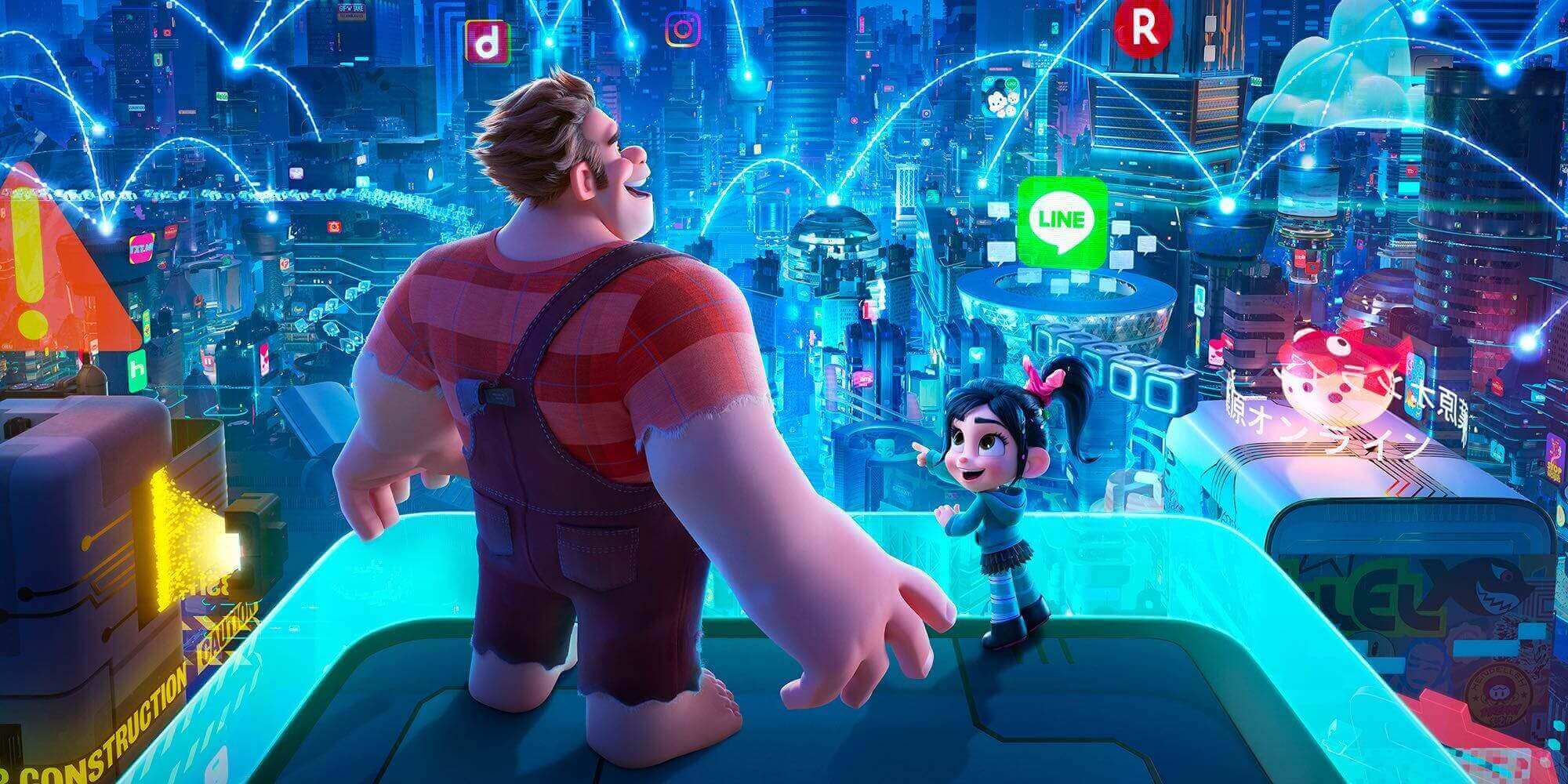 It’s rare that the words “Disney sequel” mean anything good. That being said, when it was revealed that directors Rich Moore and Phil Johnston were working on a sequel to Wreck-It-Ralph, I was pretty excited. Wreck-It Ralph wasn’t one of my very favorite Disney movies, and I found Vanellope extremely irritating at times. But it was extremely creative and made a lot of bold choices, creating memorable, original characters and proving once again what Disney animation could do outside of their comfort zone. It was well received by critics but a little under-appreciated by the general audience. I can genuinely say that Ralph Breaks the Internet is a pretty good follow-up.

Ralph Breaks the Internet takes place six years after Ralph’s original soul-searching adventure. He and Vanellope have remained best friends all this time, but it’s slowly becoming clear that they want very different things. Despite now being happy and having friends, Ralph maintains a very monotonous lifestyle of working his game during the day and hanging out at Tapper’s at night; Vanellope is yearning for something more than what her game and the arcade have to offer. In an attempt to make Vanellope happy, Ralph builds a new track in Sugar Rush for her to explore. However, things don’t exactly go as planned and the game is broken and de-commissioned. Soon, the two are off on a hunt to find a replacement controller and get the game reinstated before it’s too late, all the while coming to realize their friendship, as well as they as individuals, have changed.

Another animated sequel I was really looking forward to this year, Pixar’s Incredibles 2, ultimately turned out to be a pretty, funny retread of the vastly superior original film. While I was excited about Ralph Breaks the Internet and thought it was a great choice for a sequel, I did start to wonder if the same might happen here. However, there are a few key differences between the two sequels. Firstly, Ralph Breaks the Internet has broken the curse of Disney plot twist villains. I’m sure this is just a moment of peace and this horrible trope that needs to die in a fire will resurface in one of next year’s offerings, but it was appreciated nonetheless. Based on the marketing, I thought that either Taraji P. Henson’s Yesss or Alfred Molina’s Double Dan would be the eventual villain. It was such a relief to be wrong in this case. Also unlike Incredibles 2, Ralph Breaks the Internet gives both its leads new interesting problems and character arcs rather than beating a dead horse and reviving seemingly resolved conflicts. It’s bewildering to me any time Disney does something better than Pixar; no matter how many times it happens or how big the difference is, it dumbfounds me for some reason. Back in 2012, for example, I couldn’t believe how good Wreck-It Ralph was and how… not good… Brave was.

Ralph and Vanellope’s respective character arcs are one of the best things about this film for me, and, more so than anything else, justify its existence. They also reinforce for me a growing belief that, despite making entertainment for families and children and being labeled an evil conglomerate, Disney is one of the best at telling genuine, emotional stories that feel personal. Both characters’ points of view also serve as analogues to depression and codependency, the latter of which the movie openly acknowledges near the end. The climax serves as a physical manifestation of Ralph’s inner turmoil and is also one of the more creative ones I’ve seen in a movie as of late. I also think it’s worth noting that Vanellope is much more likable in this movie; this is in large part due to her already being friends with Ralph, eliminating a lot of her more annoying quirks/actions from the previous film. Regardless, it makes Ralph Breaks the Internet more enjoyable and, at least for me, their friendship easier to emotionally invest in.

One thing I saw and heard a lot throughout this film’s marketing campaign was that they had “too many” pop culture references, that the celebrity cameos would age the movie too fast, et cetera. When it comes to movies being overloaded with references and cameos, to me, it depends on how good the finished product is. The fact that Stan Lee appears in Princess Diaries 2: The Royal Engagement doesn’t stop it from being a crime against humanity, but it doesn’t make it anymore unbearable than it would be otherwise either. Ralph Breaks the Internet is a funny, emotional, honest look at some pretty heavy topics and I don’t think a callback to Tron or a blink-and-you’ll-miss-it shot of Nick Wilde from Zootpia takes anything away from that. If anything, as a huge Disney fan and pop culture junkie, it feels nice to see so much detail and thought put into a movie that is about video games and the internet to begin with. My only real complaint here is that I heard there was supposed to be a Kylo Ren joke in the movie, and I’d have loved for them to keep it; I’m sure it would have been hilarious. On that note, I can already hear the babies crying about lines from the trailer that weren’t in the final movie. It always happens. I do recommend sticking around until after the credits for a hearty laugh or two.

Composer Henry Jackman returns, and again his score for the film is a revelation. Once more he manages to craft a unique sound for each realm to which the characters travel, and this is tremendously valuable in making the worlds feel complete and distinct from one another. It goes without saying that the animation is gorgeous, and the best thing I can say for it is that you want to see it for yourself. Alan Menken composed a song for this film, and there is one musical number; this surprised me, but it’s hilarious and the scene that comes before it is perfect. The cameos of the Disney Princesses in Ralph Breaks the Internet are really cool; personally, I love most of these characters anyway, so seeing them again with (most of) their original actors returning is a big deal. I think it would even be a good idea to make a short film solely about them for the Blu-Ray release. This film has a cast that’s simply too huge to name, and I didn’t even know a lot of these people were in it until the credits rolled. Of course, John C. Reilly and Sarah Silverman are the standouts by virtue of portraying the main characters. But everyone else does well too, and my favorite new character is Gal Gadot’s Shank. There’s a scene where Vanellope gushes about how cool and badass Shank is, and every word of it is true. She also looks exactly like a computer-generated version of Gadot, which was a great idea; if it’s not broke, why fix it?

Overall, Ralph Breaks the Internet is a really good film.  I enjoyed it a little bit more than the previous one simply because I liked Vanellope more and the characters get to explore even more realms. The comedy isn’t quite as strong in this one, but that’s more than a fair trade-off for the character development and hard questions hidden behind this film’s shiny veneer. That being said, there is plenty of fun to be had here, and the central friendship is heartwarming. I can’t recommend seeing this film highly enough, and again, I urge you to stay through the credits.

Ralph Breaks the Internet is a really good film. I enjoyed it a little bit more than the previous one simply because I liked Vanellope more and the characters get to explore even more realms. The comedy isn’t quite as strong in this one, but that’s more than a fair trade-off for the character development and hard questions hidden behind this film’s shiny veneer. That being said, there is plenty of fun to be had here, and the central friendship is heartwarming. I can’t recommend seeing this film highly enough, and again, I urge you to stay through the credits.