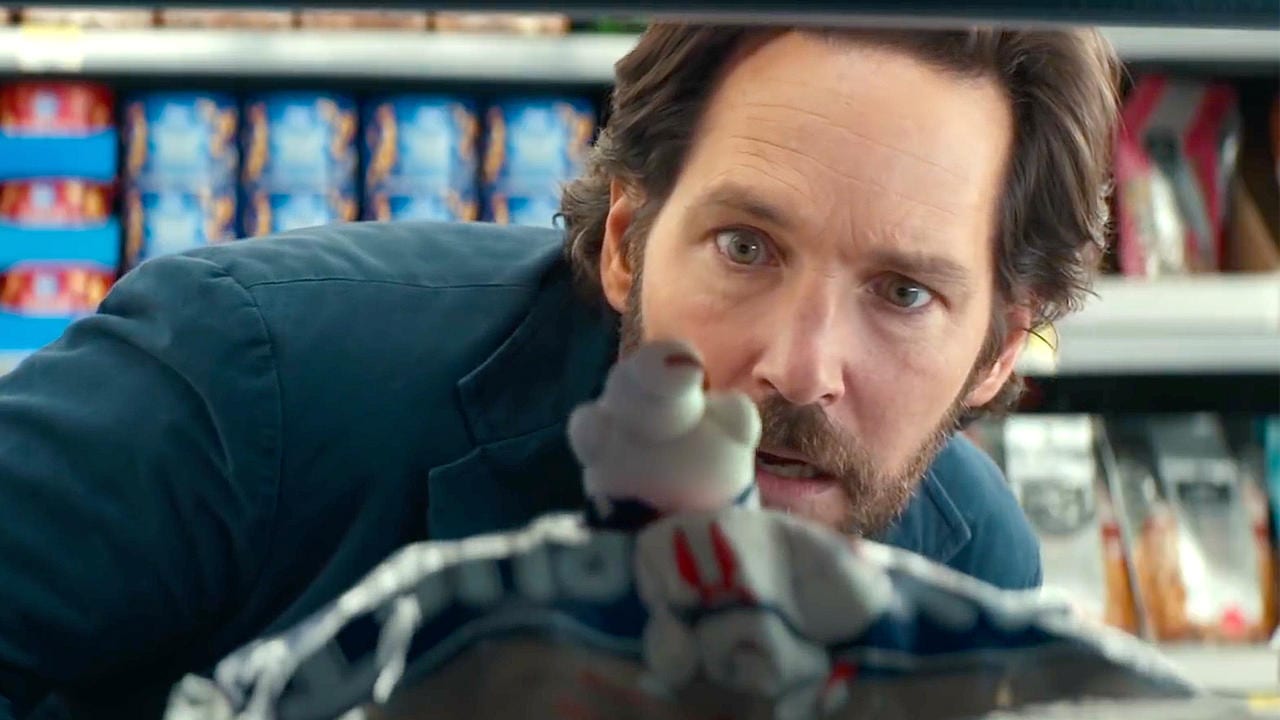 Paul Rudd might be ‘fraid of some ghosts, as Sony has released what they’re calling a “character reveal” from the upcoming Ghostbusters: Afterlife. This will be the third Ghostbusters film in the main series and the fourth overall if you count the Paul Feig remake/reboot/whatever from 2016 (which I don’t think anyone does unless they’re offering it up for their sins). Taking place in modern times, Ghostbusters: Afterlife stars McKenna Grace and Finn Wolfhard (who will be in every horror or sci-fi production that needs a kid until he can no longer play a kid) as siblings with a link to the Ghostbusters, Carrie Coon as their mom, and Paul Rudd as the adult comedian. Bill Murray, Dan Aykroyd, Ernie Hudson, Annie Potts, and Sigourney Weaver will return as their legendary characters from the first two movies. Ghostbusters: Afterlife is directed by Ivan Reitman’s son Jason Reitman, a very good filmmaker in his own right – Labor Day notwithstanding. Check out the Ghostbusters: Afterlife character reveal below:

So, the Stay Puft Marshmallow Man is back, and now he’s tiny, and there’s a million of him. The “Mini-Pufts,” as the Ghostbusters: Afterlife character reveal calls them, are also CGI, and they look like they get into lots of wacky hijinks. Taken in isolation, the scene is well-directed; the staging is almost identical to the haunted library scene that opened Ghostbusters, with creepy goings-on in the background while an oblivious character goes about their business. They’re even using the spooky music from the original. But as a portent of what’s to come, it’s a little worrying. Is Ghostbusters: Afterlife going to throw a bushel of ‘Member Berries at the audience? For example, we all love the Stay Puft Marshmallow Man, but he existed in isolation; he was Gozer’s final form because Ray thought of him. What reason could there be for him to come back? There may be some explanation other than “He was in the first one,” but even if there is, how is it going to feel like anything but a tug on the nostalgia cape? I’m already iffy about Ghostbusters: Afterlife; now that Harold Ramis is gone, I don’t really want another Ghostbusters movie. I’m not interested in the “next generation,” even though I love Paul Rudd (and, admittedly, got a kick out of watching him buy Ben and Jerry’s ice cream). Having the remaining Ghostbusters come back – as the Ghostbusters – is nice, and I’m sure this will at least be more respectful of the original than the girl power one if nothing else. But if it’s just a nostalgia dump, I don’t see it becoming anything more than a novelty. I think the intentions are good this time (from the creatives, if not Sony), but some things are better left alone.

What did you think of the Ghostbusters: Afterlife character reveal? Are you excited for the movie? Is there a chance in hell Slimer doesn’t return? Let us know in the comments, and stay tuned to Geeks + Gamers for more movie news!

Ghostbusters is my favorite movie of all time. To answer your question “What reason could there be for him to come back?” has multiple possible explanations including (possible spoilers):

1) In Ghostbusters the Video Game, which is widely considered canon, it’s pointed out that Gozer likely can only return to this universe in the form of Stay Puft. Therefore this clip can easily point to Gozer coming back. This theory is also bolstered by the fact we saw Terror Dogs and Shandor Mining Company in the first trailer.

2) Even though the movie finished filming before anyone knew about Baby Yoda, it’s a Baby Groot-level cashgrab that means almost nothing to the overall story.

3) Stay Puft marshmallows somehow got infected with ectoplasmic energy, bringing them to life like in The Real Ghostbusters.

I really hope it’s not Gozer again. I don’t want to see them fight the same villains, or have the new people destroy him or something.

Man I’d love it if it’s Gozer. That’s OG Ghostbusters and should have been what Ghostbusters 2 was all about. Remember, Gozer was never defeated in the first movie. All that happened was that the gateway was closed by crossing the streams. Gozer still has unfinished business in this dimension and I’d love to see a sequel covering that.

“Welcome to the Golden Age of Sequels, Requels, Prequels, Reboots as well as, Wokequels and Wokeboots…”

Why is the Stay Puff Marshmallow Man back? Same reason why Emperor Palpatine came back, WHO CARES that’s why! Nostalgia sells. And the audience writ large don’t even need an explanation. Everything now seems to boil down to,

“That’s why!” Don’t think too hard or think at all. Turn your brain off and dribble into your bag of popcorn. The movie will do all the thinking for you. Isn’t that swell?

Though the industry has been doing wonders for my finances as I have not been to a theater since 2012. Last movie I seen in theaters was SW Episode 1 3D. Not that this brings me any joy, but I refuse to indulge an industry that continues to insult my intelligence?

And that doesn’t mean that there aren’t ANY good films, just that the bad outweigh the good by a huge margin. And I will never hand money over to these bastards again. Though in some small way, I still hold out hope that one day these studios will “shapen up” and stop wrecking these franchises on ideological grounds!

Cause there are real good story tellers out there, though Harveywood seems to have very few of them on hand. Their current romance with Wokeism is a phase just like all the other phases throughout history. In the 60’s is was all Hippy Dippy flower power and Psychedelic themed films. The 70’s have way to gritty crime dramas and the birth of the, “Summer Blockbuster” with Jaws and SW. That carried on through the 80’s. And the late 70’s-80’s began the comic hero feature films on a regular basis that is still in high gear today though a lot of these have gone through the reboot phase multiple times in a small time frame(Superman, Batman, X-Men).

I guess I have become the very old curmudgeon I always feared I would. But with that said, I am damn proud to be one! Much of my criticisms are based on what I observe. And they are based on standing PRINCIPLES where as everything that comes out of Harveywood is NOT based on principle but rather FEELINGS. And focus groups and hot trends I might even venture to say, pure ignorance too? Yeah, I think so.

Whenever things are done, that are not based on any principles, it is doomed to fail. Every. Damn. Time. I understand that the bottom line is what they are most concerned with. That is all well and good. Where the issues start to show is when they want to earn that bottom line while also bastardizing the very things that will get them that bottom line.