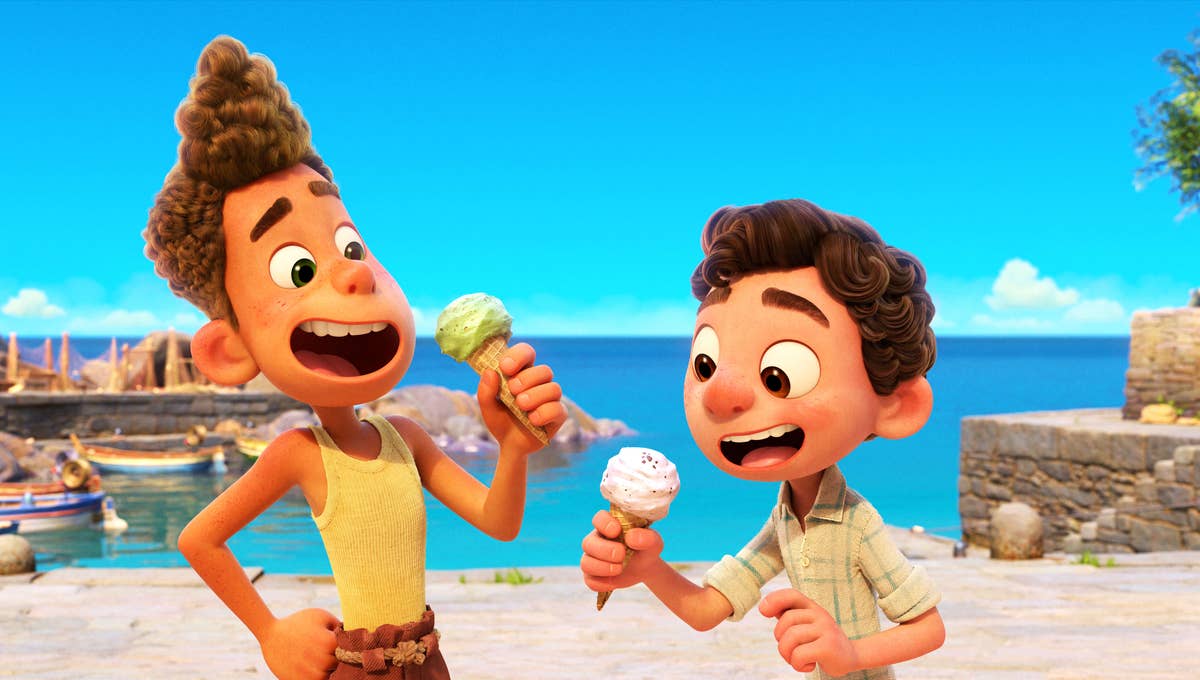 On Wednesday, April 28th, Disney released a second, longer trailer for the upcoming Pixar film Luca. Like the earlier teaser, this clip plays up the relationship between Luca and his friend, specifically the misadventures they get into trying to hide their aquatic nature. Luca stars Jacob Tremblay, Maya Rudolph, and Jim Gaffigan, and is directed by Enrico Casarosa (La Luna). The film is set to premiere exclusively on Disney+ at no additional cost to subscribers. Check out the latest trailer here:

The Luca trailer looks pretty good to me. I like the general atmosphere Luca is going for with the pretty Italian song and gorgeous shots of the countryside. I’m also enjoying what we’ve seen of the friendship between the two boys. Luca is more timid and worried about revealing his scales while his friend encourages him. For me, the characters and their relationships are going to make or break the film. Pixar usually excels in that area, so I’m not too worried. I’m rarely won over or lost by trailers and try not to count too much on the movie being just like it because I’ve been surprised more than once that way. I would watch Luca regardless because I watch every Pixar movie (they usually come out right around my birthday), and I love Jacob Tremblay and Jim Gaffigan.

There has been some controversy surrounding the film’s Disney+-exclusivity coming from virtually all sides. This is the second Pixar film in a row that completely shut theaters out, which can’t be good for their business. Pixar artists are also devastated that their work has become streaming fodder, which comes at no extra charge and will likely never see a cinema screen. Even some film fans (though I gather it’s the minority at this point) are upset that the film will be relegated to TV screens. I think the truth is that, in Disney’s eyes, none of that translates to money, so they don’t care about it. If theaters go under or even just suffer, it’s not their problem. They also aren’t known for treating their employees well, so I doubt they’re concerned with morale at Pixar. I feel kind of torn because it’s neat that the movie will be free at release (if you have a Disney+ account). I can basically just buy dollar store snacks and have a movie night with the family when it comes out. And I’m sure that appeals to a lot of other people as well. I’m not sure this is best for the movie industry as a whole, though, and personally, I’m kind of over them doing this. With most major movie theaters opening back up and people being vaccinated en masse, I don’t understand why this still needs to be a thing. I look forward to watching Luca; I just can’t help but question what Disney is doing to the movies as a whole.

What did you think of the trailer? Do you plan on watching Luca when it hits Disney+? Are you secretly a mermaid? Where have you been hiding!? Let us know in the comments below.

Pixar is awesome, but the whole Mer-Man thing used to be a Ben Stiller joke in Zoolander. Pixar allows for more creativity and I wish there were more movies. By Disney doing this, if theaters want to compete, they should start showing other animation companies. This is where we see that Disney almost has a monopoly. Theaters should simply go a more creative route. Show low budget things, that are really well told and well crafted. In fact, theaters should maybe even stop showing Disney things altogether.