Going into this year, Pixar‘s Soul was one of my most anticipated movies. The trailers didn’t make much of an impression on me, but when it comes to Disney and Pixar, I don’t go by the trailers, which are often intentionally misleading. I learned that from Tangled’s abysmal marketing campaign and conveniently forgot long enough to think 2020’s Mulan could be good. It’s also directed by Pete Docter, Pixar’s most consistently good director (Monsters, Inc., Up, Inside Out). Notably, the trailers for Soul made it seem like something of a companion piece to Inside Out, dealing with similar – if not quite identical – subject matter. The film also boasts an impressive cast headed by Jamie Foxx and Tina Fey. Angela Bassett, Phylicia Rashad, Graham Norton, Rachel House, Alice Braga, Wes Studi, Richard Ayoade, Daveed Diggs, Questlove, and more bring life to the film’s background characters. Unlike Mulan’s premium release, Disney+ released Soul for free on Christmas Day, so, naturally, I gave it a watch. Let’s have a look.

Soul follows Joe Gardner (Jamie Foxx), an aspiring jazz musician who’s stuck teaching middle school band. When the school he works for offers him a full-time tenured position, his mother (Phylicia Rashad) is elated, but he can’t help wishing for something more out of life. He unexpectedly gets his chance when a former student (Questlove) calls him about an opportunity to play with the Dorothea Williams (Angela Bassett) jazz quartet. His audition goes surprisingly well, and it seems like his life will finally really begin. However, on his way to prepare for the night’s gig, he falls down a manhole. With his body in a comatose state, Joe finds himself on a path to the great beyond. However, he’s not ready to die when he just got his big break. He makes his way to the great before, the place where souls wait to enter a body on Earth. He’s mistaken for a mentor and assigned to 22, a soul who doesn’t want to go to Earth. They strike a bargain: Joe will help 22 earn an Earth-pass and take it himself, returning him to his life and allowing her to forgo life’s trials and tribulations. Things don’t quite go to plan, though, and the two are off on an unexpected quest to get Joe back to his body.

The voice acting in Soul is exceptional. Pixar is usually very good about finding the right actor for a character, rather than just a famous one to draw attention. But Soul is particularly well cast; with a few exceptions, I completely forgot who was playing who and just got sucked into this world. Jamie Foxx and Tina Fey aren’t a duo I would have imagined heading this or any movie, but they work extremely well together. Despite wanting desperately to return to his life on Earth, Joe comes off as world-weary and jaded. 22 is the perfect foil to Joe, claiming she has no desire to live but savoring every moment and experience once on Earth. These two carry the movie, but other characters like Joe’s mom, Dorothea, and Terry (Rachel House), are enjoyable as well. Graham Norton as Moonwind is amusing, but I think he easily could have been funnier given some of the situations in which we find this character. This movie is clearly more serious and cerebral than Pixar’s usual output, which tends to be more emotional than intellectual. In that light, I understand the relative absence of jokes, and I don’t necessarily have a problem with it. With Moonwind, I just think it’s a slight flaw because the character is obviously supposed to be funny, and sometimes his jokes don’t land. The comedy that is in this film is a bit of an issue overall, I’m afraid. At one point, Joe remarks that he hates cats in response to a situation he’s in, and it doesn’t really connect to anything. He never previously established a dislike for cats, and it never plays into a situation that it should be connected with. This would have been funnier if they played off of the obvious irony in the situation. One other nitpick I have is that the film wastes Daveed Diggs! He only has three lines and adds very little to the film. I was excited that he was attached to the film, so it was a little bit disappointing that he may as well not be in it at all. 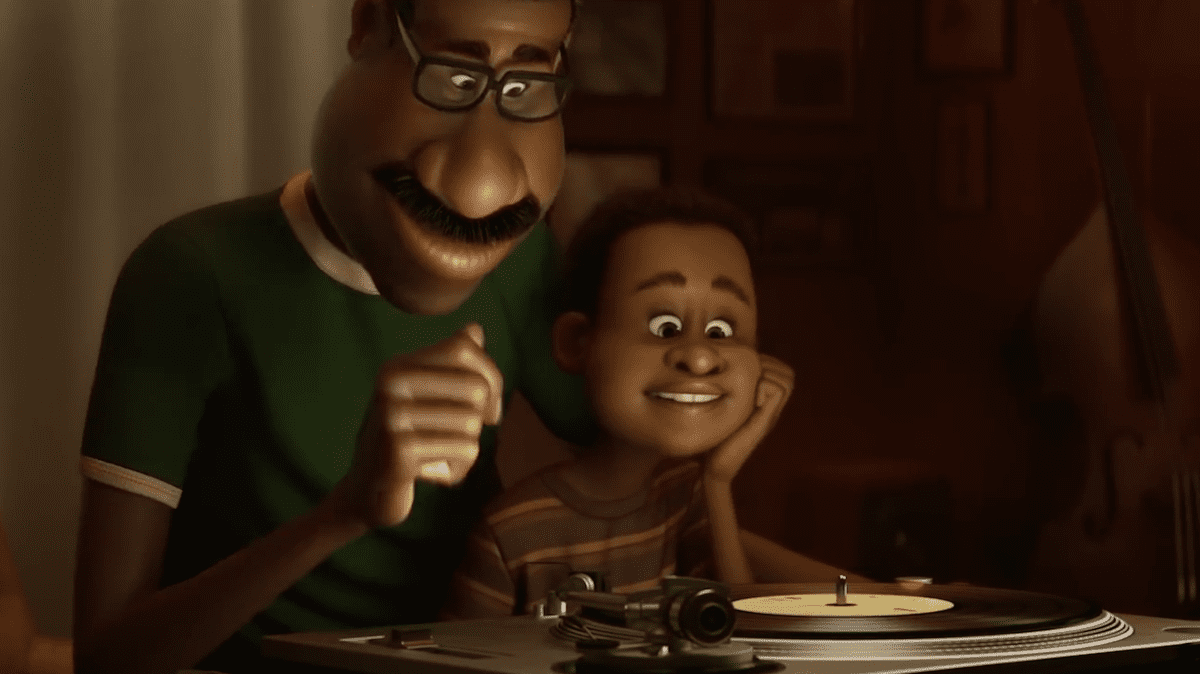 I also want to talk about the animation and shot composition, which are both remarkable. All the details look incredible in Soul. They nailed the way musicians’ fingers move, the movements of Dorothea’s embouchure when she plays saxophone, etc. They also make some magic with Connie, a student Joe tutors, and her passion for playing the tuba. This is another character I wanted to see more of, but I understand why they handled it the way they did. I like the designs and concepts explored in the Great Before, and this film surprisingly reminded me of Studio Ghibli, with the way it makes the mundane “little things” in life like food, nature, and travel look and feel magical. This ties into the film’s themes, and it’s very satisfying to experience. The way certain scenes are edited is also quite clever; I don’t want to spoil it, but there’s one scene where Joe is talking to his mom, and the way they transition is really cool.

This review took me longer than I would have liked, and I’ve thought a lot about why that is. Soul is a movie that tries harder to make you think than to feel. As I mentioned earlier, that’s very unusual with Pixar. A lot of their films are absolute tear-jerkers and even the ones that aren’t usually revolve around a central relationship and how it’s built and tested. Joe and 22 have a relationship, but it’s more of a straight-man and fish out of water shtick than a deep bond formed between two great friends. When a movie doesn’t have big emotional moments, it’s harder for me to know how I feel about it, and I feel weird saying that. It feels stupid to say it, but when a movie doesn’t spoon-feed me emotions, I have to think about it for longer. I’m so used to a film telling the audience how to feel or perceive a character or a relationship, and Soul doesn’t do that. This also ties into an issue I thought I had with the ending: it’s rather abrupt. However, these factors work in the film’s favor, especially if you sit on it rather than just having a knee-jerk reaction, which I think a lot of people are. They’re underwhelmed because they were counting on a big emotional payoff, like in Inside Out, Coco, or Toy Story 3. I love the former two, but Toy Story 3 is too blunt and emotionally manipulative for my taste. And there are emotional scenes in Soul; they’re just more realistic and relatable. There’s very little bombast in this film. And the first time I watched the movie, one scene did make me teary-eyed. We’ll discuss this more in a spoiler review I’ll be doing with a colleague. I think it’s a good thing that Soul makes you think and doesn’t give easy answers. After all, do these questions have solid, unchanging answers? The film questions what our purpose is, if we even need one to justify life, and if all this living is worth dying for. This isn’t a movie for kids, but it is a very good movie, and some of the ideas and messages really hit me after this year.

Soul isn’t a movie for kids, but it is a very good movie and some of the ideas and messages really hit me after this year.