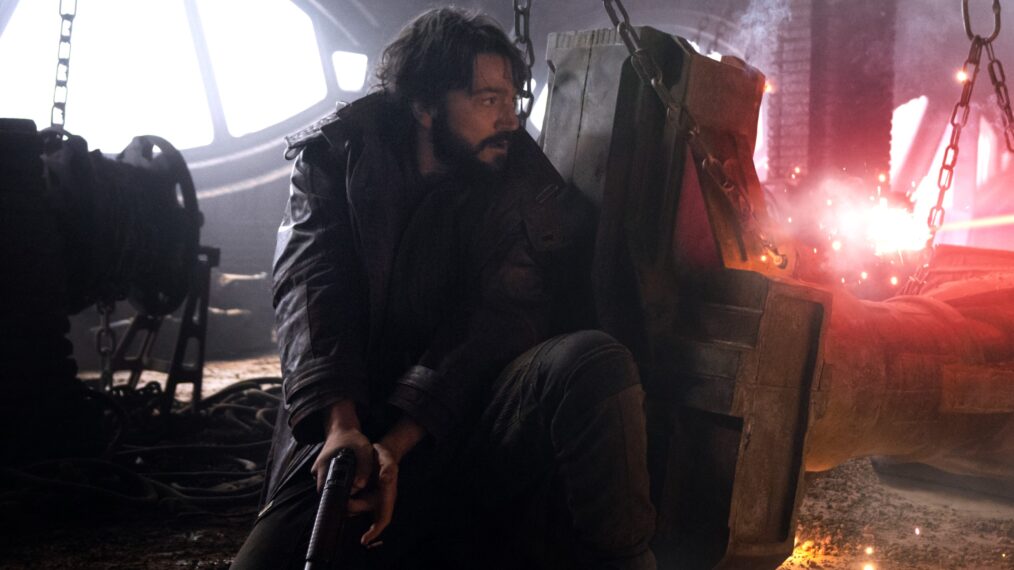 The first two episodes of Andor have been promising but not amazing, displaying a different look and tone for Star Wars. “Episode 3” is supposed to close out this initial arc, as Cassian meets his official introduction to the Rebellion in Luthen Rael. Let’s have a look.

In “Episode 3,” Luthen meets Cassian as the Imperials close in. Flashbacks show Maarva finding and adopting the boy to save him from vengeful Imperial forces. Of course, this separates him from his sister. In the present, Maarva, Bix, and others struggle to cover for Cassian, and Timm is caught in the crossfire. Luthen and Cassian talk for too long and end up embroiled in a firefight with the recruits. They ultimately escape, leaving a demolished building, several dead men, and a demoralized Officer Syril in their wake. 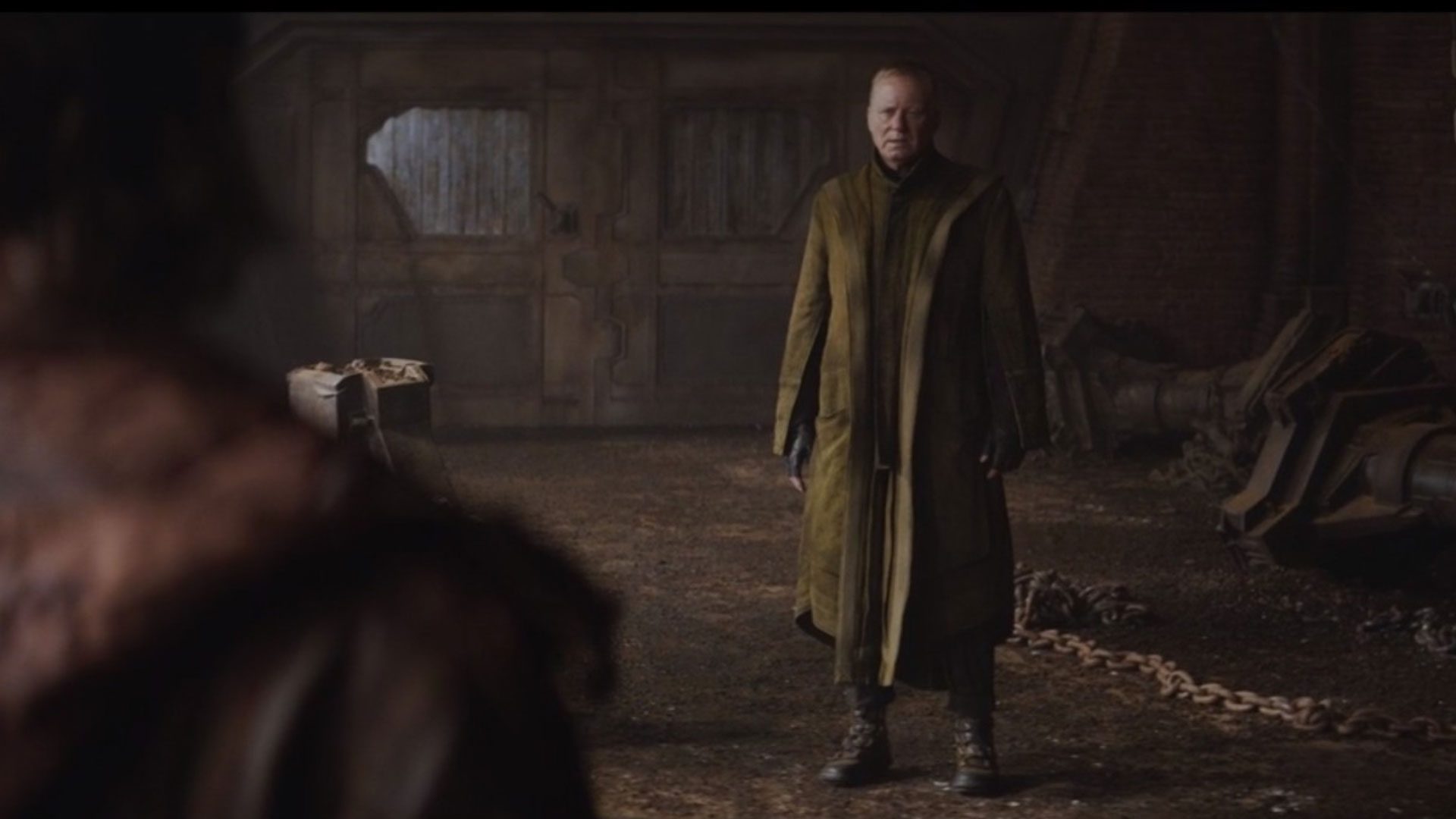 Of these first three episodes, each progresses faster than the last. I enjoyed “Episode 1” more than not, but it’s definitely a slow burn, and I could imagine people getting bored with it. “Episode 2” had more going on and felt much shorter even though it wasn’t, and “Episode 3” feels like almost nonstop action. Everything is turned up a notch in this episode, from the visuals to the intensity of the performances. “Episode 3” looks cinematic more than the first two, and the framing of the characters is just fantastic. I almost feel bad for saying this, but Cassian’s backstory on Kenari has bored me to tears across the first two episodes. It’s hard for me to stay focused when the Kenari language isn’t even translated in subtitles. I understand that relationships and action are the focus of these scenes, and I frequently love scenes (in anything) that contain no dialogue at all. But for some reason, whenever the kids come on speaking a language I don’t understand, it’s like my brain shuts off. I found Din Djarin’s backstory on The Mandalorian much more engaging, for example. “Episode 3” mostly avoids this pitfall by getting to the point as Maarva finally appears on Kenari. They also introduce some moral ambiguity in her character by making her a scavenger there to pillage the ship’s remains. Her decision to take Cassian home is questionable, too; her own pillaging buddy tells her the boy has a home and a family here. Maarva justifies it by saying the Empire will kill him and all his people for what they did, which may be true. And I’m not saying it was the wrong choice; as an adult, Cassian looks on Maarva as a mother, and they seem to have a nice enough relationship. This just makes the situation ever more complicated. 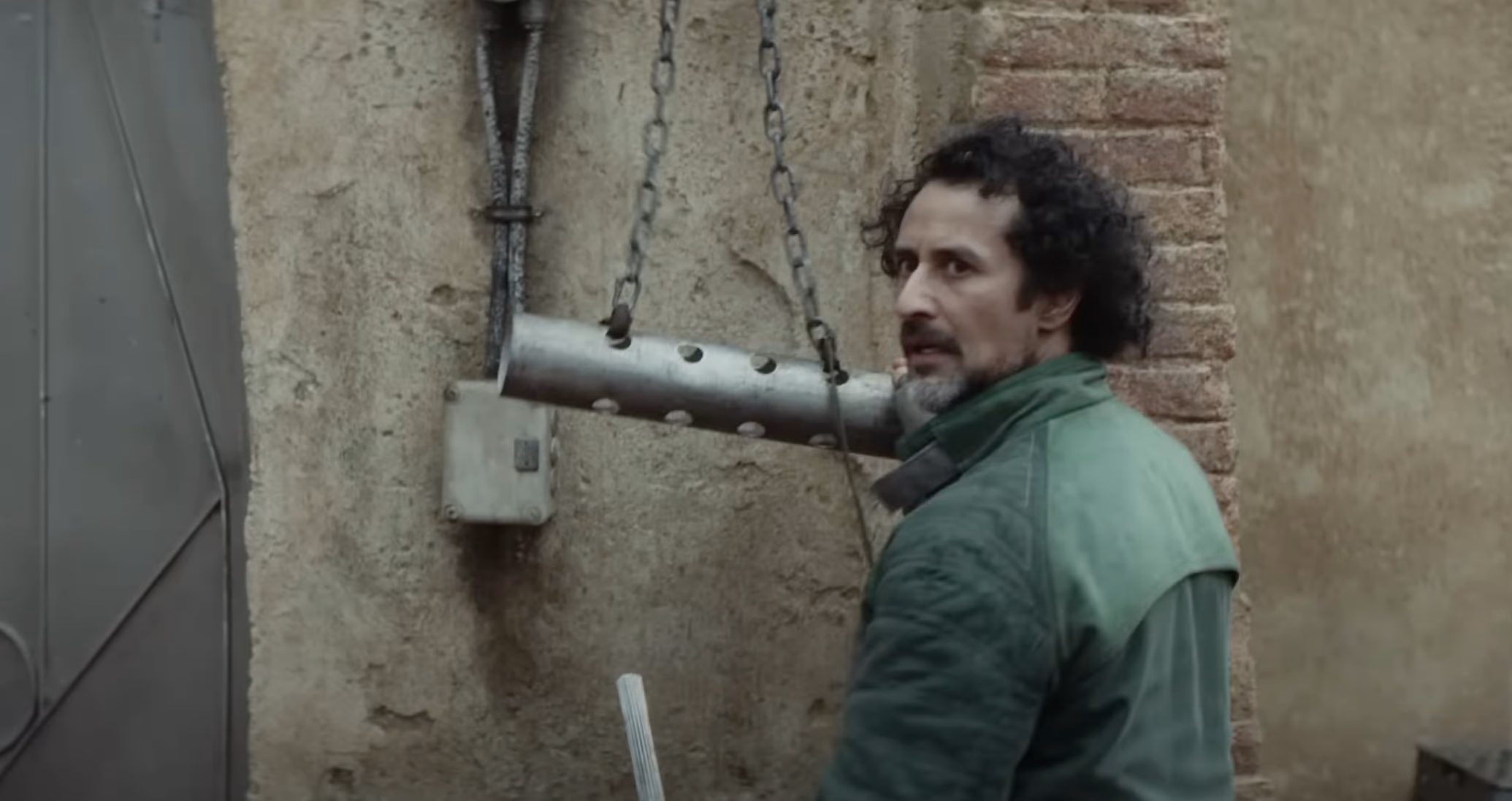 One of the episode’s major highlights is the first meeting between Andor and Luthen Rael. For one thing, I just love Stellan Skarsgård in everything. Whether he’s playing a hero, a villain, or anything in-between, this guy has an undeniable screen presence, which is probably how he’s maintained such a healthy career over the decades. He gets quite a bit more dialogue in “Episode 3,” first with Bix and then in the big meet-up with Cassian. Diego Luna shows off his acting muscles in his monologue about the Empire’s hubris. Part of this speech was shown in a previous clip, but it’s great to see and hear the whole thing in context. You can feel his disdain for everything Imperial with every word, every gesture, as he details how he stole the part. When he says, “They are so fat and satisfied,” the disgusted look on his face almost speaks more than his words.

“Episode 3” is very satisfying because the flashbacks fit in well with the main story. We see a need for vengeance in the Young Cassian’s eyes as he smashes the consoles inside the ship. This is why he would consider going with Luthen to fight the Empire. The flashbacks also inform his care for Maarva, such as asking his friend to watch over her and ensure she keeps the heat on. I still think Cassian is the weakest character in his show, but he gets some powerful moments in “Episode 3.” 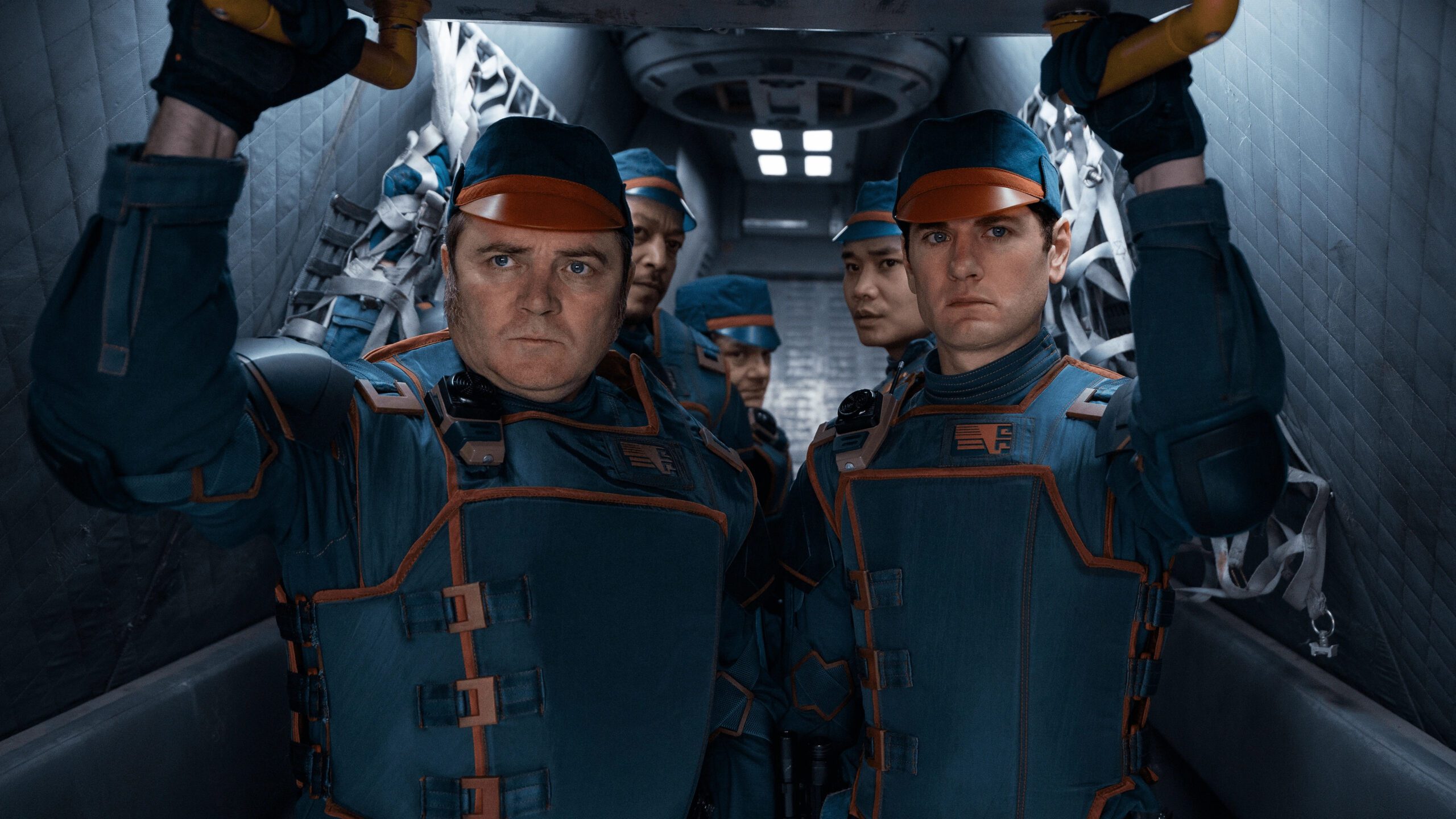 Speaking of powerful moments, Syril really gets to shine here as well. Throughout the search for Cassian, Syril grows increasingly flustered and concerned for his men. I get the impression he’s never been in the field before because of his strong reactions and one scene where he hides and must convince himself to get out there. The acting has been one of the highlights of Andor so far, and Kyle Soller is a standout among giants like Stellan Skarsgård. My favorite single shot in this episode is of Syril’s shocked visage as Cassian and Luthen escape, killing several of Syril’s men by blowing a vehicle up. This man can say so much with a glance, and the end of “Episode 3” showcases that brilliantly. My husband asked why he was acting like that with all the chaos going on. Personally, I read it as a response to trauma and the shock of an army battalion being beaten by two unarmed men. I’ve never seen Kyle Soller in anything else, but I hope to in the future after this. My main gripe with the episode is with Syril and his men’s uniforms; they’re ridiculous! They look like cheap Halloween costumes. My husband said they reminded him of Starship Troopers, and now I can’t unsee it. They really dropped the ball on these costumes for a show with such impressive production value. 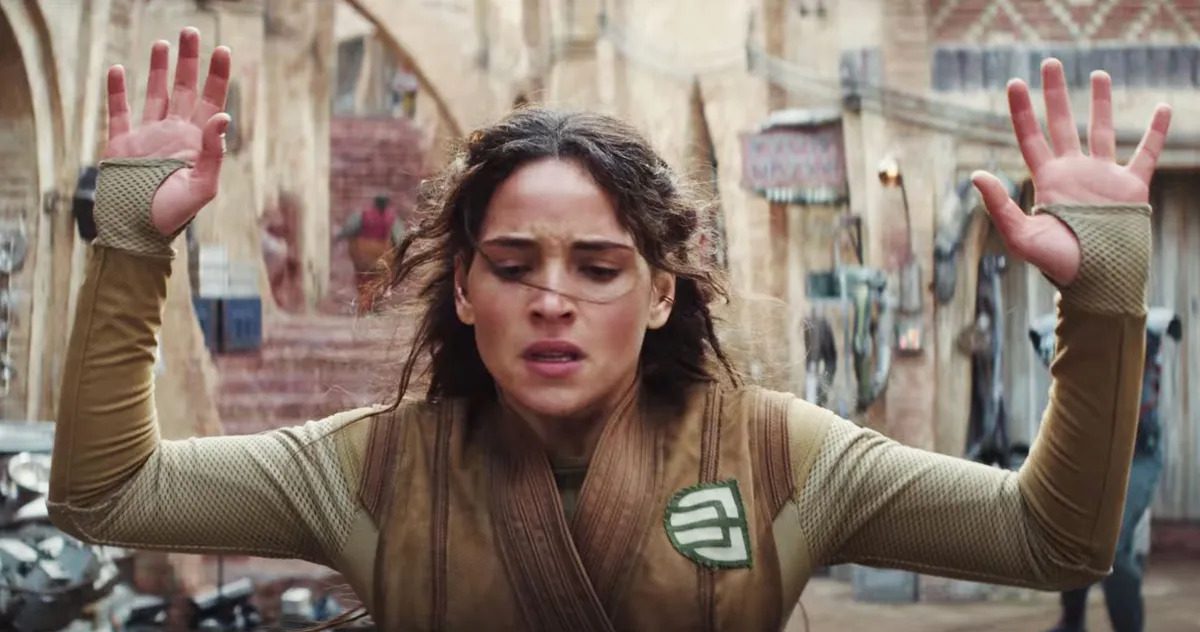 Timm also gets killed in this episode. He charges forward when he sees Bix in danger, and one of Syril’s men disobeys orders, opening fire on the unarmed man. I’m not sure how we’re supposed to feel about this, but this guy was dumb, untrusting, and, frankly, a little whiny. Bix was wrong for keeping things from him, but he also sentenced her friend to death out of jealousy. I feel sorry for Bix, though. First, she learns that her boyfriend is a traitor and turned in her friend, then she watches him die. Timm died because he was stupid, stubborn, and involved with the wrong woman. But it’s sad for Bix.

“Episode 3” is far and away my favorite episode of Andor so far. All the pieces are finally in play, the acting from Diego Luna, Stellan Skarsgård, and Kyle Soller is next level, and it’s visually sumptuous. This episode also has several memorable dialogue exchanges, which is more than I can say for the other episodes. This episode kind of feels like a movie, and I mean that as a compliment.

"Episode 3" is far and away my favorite episode of Andor so far. All the pieces are finally in play, the acting from Diego Luna, Stellan Skarsgård, and Kyle Soller is next level, and it's visually sumptuous.