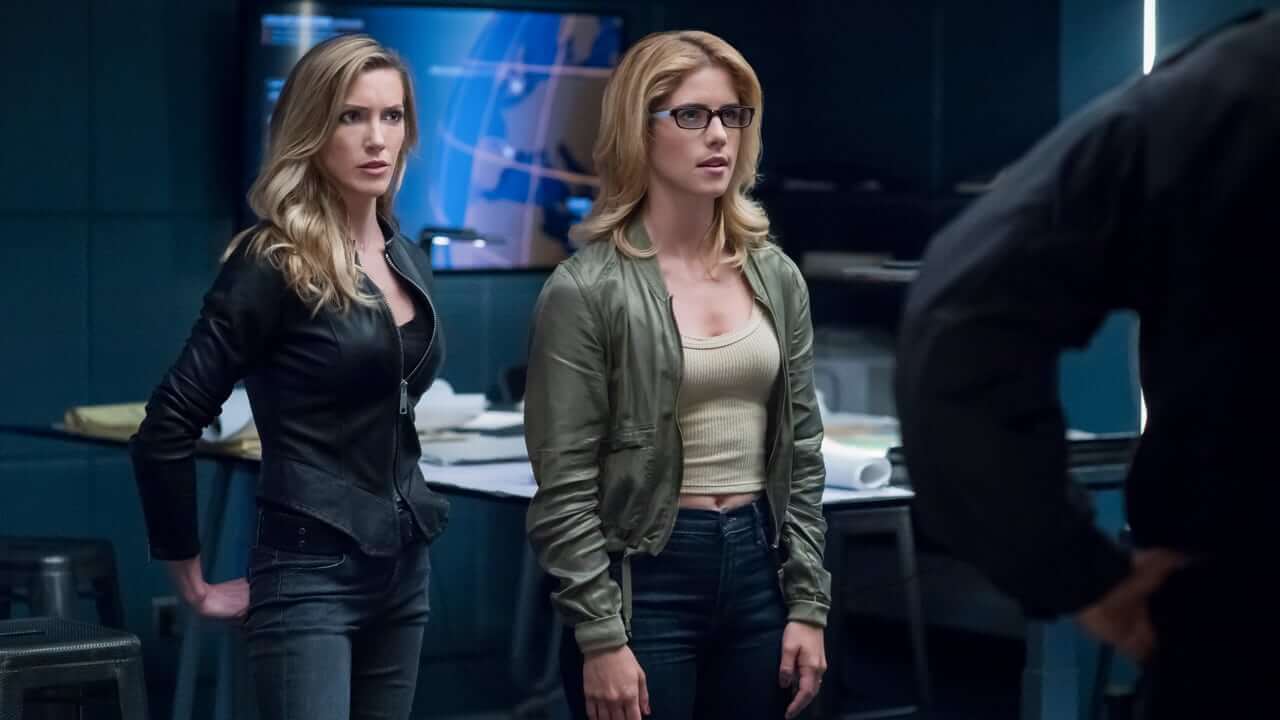 Things have looked grim for Star City’s heroes throughout the first leg of Arrow season 7, but “Due Process” puts a light at the end of Oliver Queen’s very dark tunnel. In furthering the season’s themes, it also offers hope to some other Team Arrow members dallying with the dark side, as well as peels a few layers of the flash-forward onion. There are a couple of questionable moments and plot points, but this one of the better episodes of the year.

When a guard is murdered in Slabside prison, Stanley is accused and dragged off to the hole for the rest of his sentence, and Oliver seeks out the real killer to clear Stanley’s name. Felicity and Laurel get a lead on Diaz that tests Felicity’s bending morality. Laurel looks for a way to free Oliver. Diaz’s plan is revealed. Diggle and Felicity clash on how best to pursue Diaz. In the future, William and his confederates discover more about Felicity’s fate.

Oliver’s trials in Slabside have been more engrossing than watching his sidekicks try to pick up the slack and stop Diaz this season, but “Due Process” elevates the tension and the personal stakes outside of the prison’s walls. The tracking device Felicity planted on Silencer leads her and Laurel to a warehouse (replete with a Felicity Smoak self-aware joke about bad guys and warehouses), but they run into Diggle and Dinah, who were following their own trail to capture last season’s unlucky penny of a villain. For their troubles – and after the requisite shouting match about who should stay out of whose way – the fractured Team Arrow finds both the kidnapped Anatoly and a bomb. Diaz was hip to the tracker all along, and once again the good guys are on the ropes. Realizing what we (and Curtis) have been waiting for them to realize, everyone finally decides to work together to bring in Diaz. And that’s where things start getting interesting. 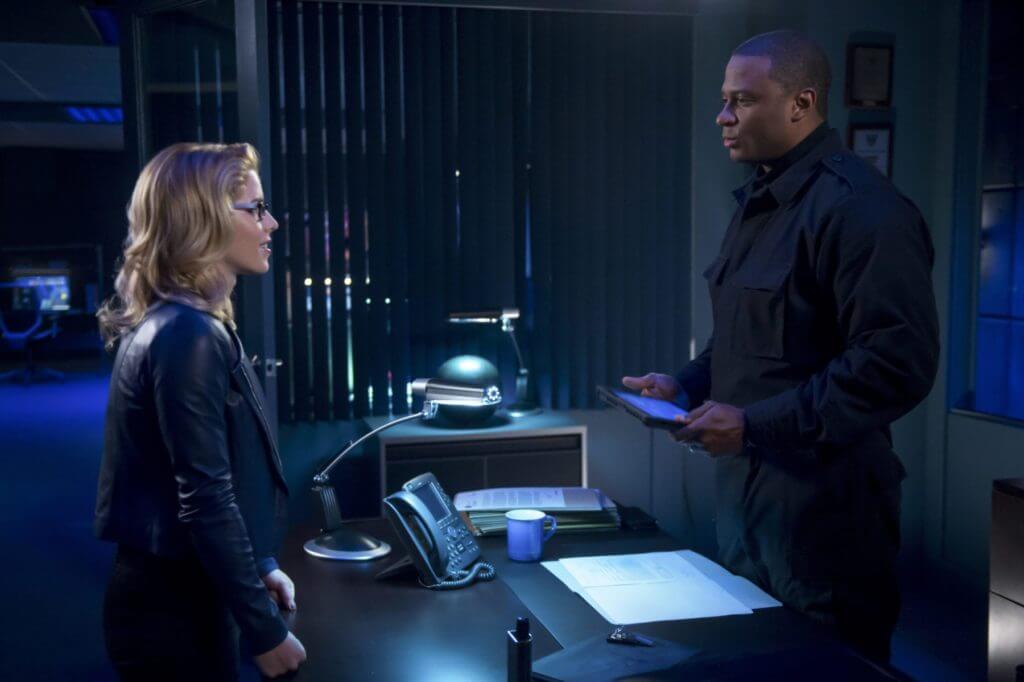 The plan is to send an undercover Anatoly into a Russian Mob hangout so he can steal some computer files that could lead to Diaz. When Diggle learns he’s been discovered, however, Felicity tells Anatoly he’s safe. The result is that they get the files, but Anatoly is beaten and almost killed. Felicity’s darkening, which has been steadily developing all season, is coming to a head. No more easy outs, no more tricks, just Felicity coldly – and, more importantly, easily – making a decision that could get someone killed. She’s more than willing to allow a guy who’s helping them to be murdered if it gets her closer to getting ending the nightmare through which Diaz has put her family. Whether she’s right or wrong is open to debate. She did sell out Anatoly, but she also got the information they needed, and Anatoly will be okay. And Diaz’s endgame would’ve killed a lot of innocent people. But, if the flash-forward scenes in “Due Process” are any indication, the ramifications of Felicity’s decision don’t end with Diaz, and will eventually destroy her.  Like The Flash has done since its inception, Arrow is examining utilitarianism vs. Deontological ethics, or the greater good vs. the immediate good, and it’s not coming up with easy answers.

What’s most satisfying about this debate is that it finally puts the rest of Team Arrow into Oliver’s shoes. From the beginning of the series, Oliver’s done a lot of morally questionable things, and he’s been admonished, insulted and judged for every one of them. Now, he’s not around to lead the pack, and someone else has to decide what’s right and wrong in the face of a soulless enemy. Diggle has a firmer grasp of how to handle these dilemmas, having been a soldier and, briefly, the Green Arrow. Felicity is new to being a leader, and she’s got to balance her fear for her family with protecting Star City and honoring her husband’s legacy as a hero. It’s Anatoly, the one among them closest to darkness, that recognizes the truth, however. This isn’t a “new Felicity;” she’s the same good person she always was, just pushed to her limits and desperate to save everyone she loves. We’ve seen this in her before, like when she diverted one of Damien Darhk’s nukes to a small town in season 4, a decision that’s haunted her since she made it. That time, it was a town vs. a city; in “Due Process,” it’s her husband and stepson vs. a gangster, albeit a kinder, gentler gangster. Like Oliver, she’s discovering what she’s capable of because she’s the only one around who can do what’s necessary. I’m looking forward to them seeing each other again, and Felicity being able to relate to her husband as she never has. Emily Bett Rickards has been outstanding this season, making Felicity’s receding moral certainty believable and human every step of the way. 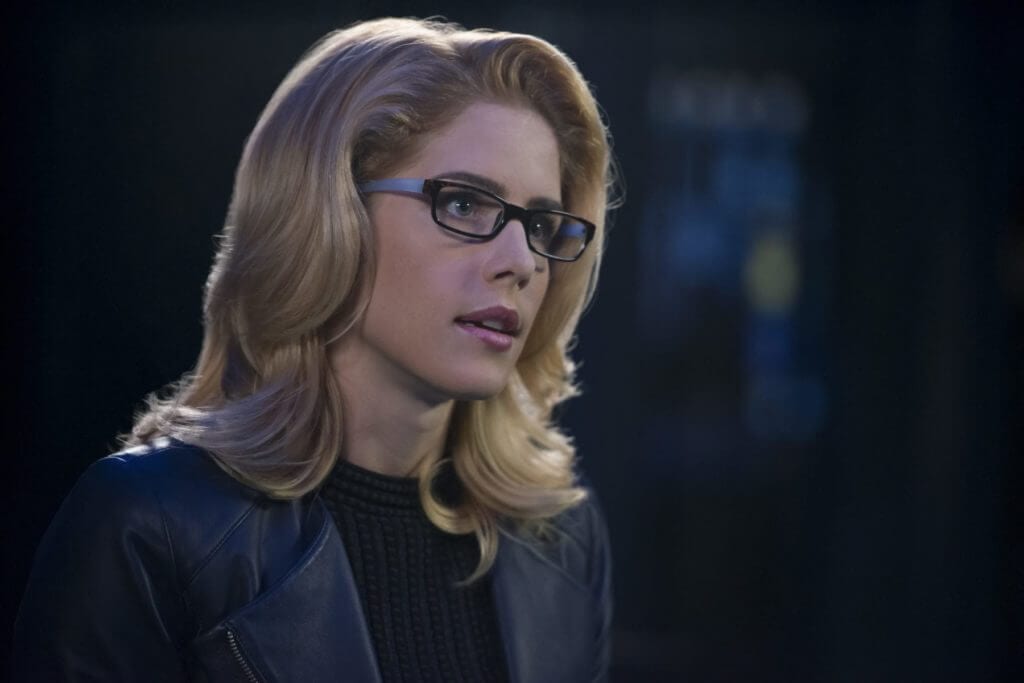 What of the future timeline in all of this? It’s hard to say, given the breadcrumb nature of the reveals, but I think Felicity will be both alive and nowhere near as evil as Dinah says she is in “Due Process.” I like the idea of her using her father’s old code name and becoming the Calculator; it’s an effective shorthand to show how far she’s willing to go if things get bad enough. She also has some history of working with criminals, as she did for Cayden James. I don’t doubt she dangled farther over the precipice of the moral edge, but her preparation in leaving clues for William tells me she’s been in control from the beginning. I take Dinah’s assessment with a grain of salt because, in addition to taking the mantle of Black Canary from Earth-1 Laurel, she’s also become the new self-righteous scold; Felicity could’ve clipped her toenails the wrong way to get Dinah to judge her. And let’s be real: they’re not killing off Felicity Smoak.

Also torn between the light and dark in “Due Process” is Earth-2 Laurel, who continues to be a much more compelling – and enjoyable – character than her grating counterpart (and Katie Cassidy has risen to the occasion, proving the deficiencies in Earth-1 Laurel’s character were the fault of the writing). Laurel is trying to live up to her doppelganger and to honor Quentin Lance, but she’s getting almost universal opposition. No one on Team Arrow trusts her; even Felicity is joining forces with her more out of necessity than anything else. Oliver himself makes it clear he doesn’t want her help, and he doesn’t want her near his wife. Moreover, when she tries to use legal means to get Oliver free, it doesn’t work. It isn’t until Dinah, her (and everyone else’s) harshest critic, sees her in a different light that Laurel fully commits to being a hero. There’s a lovely symmetry to this; both of Quentin’s “adopted” daughters help each other grow and change. And Laurel is then able to keep Felicity from crossing a line from which she’ll never return (more indication that her turn in the future isn’t what it seems). However, I do have to agree with Oliver on one thing: it was Laurel’s fault that Diaz got away last season.

Oliver faces someone who may not be as innocent as he appears as well. It seems clear to him and to us that Stanley is innocent of killing that prison guard, and Oliver does the obvious right thing in finding the murder weapon and getting Ben Turner thrown in the hole in his place. But the final moments of “Due Process” indicate that Stanley really did kill the guard and set up Turner to take the fall. So who is Stanley really? Is he a spy for Diaz, or for some other big villain that I hope emerges soon? Is he actually the big villain, hiding in plain sight? Is he in league with the new Green Arrow? Or is something else going on? There’s no way to know right now, but this already terrific storyline is getting even better. 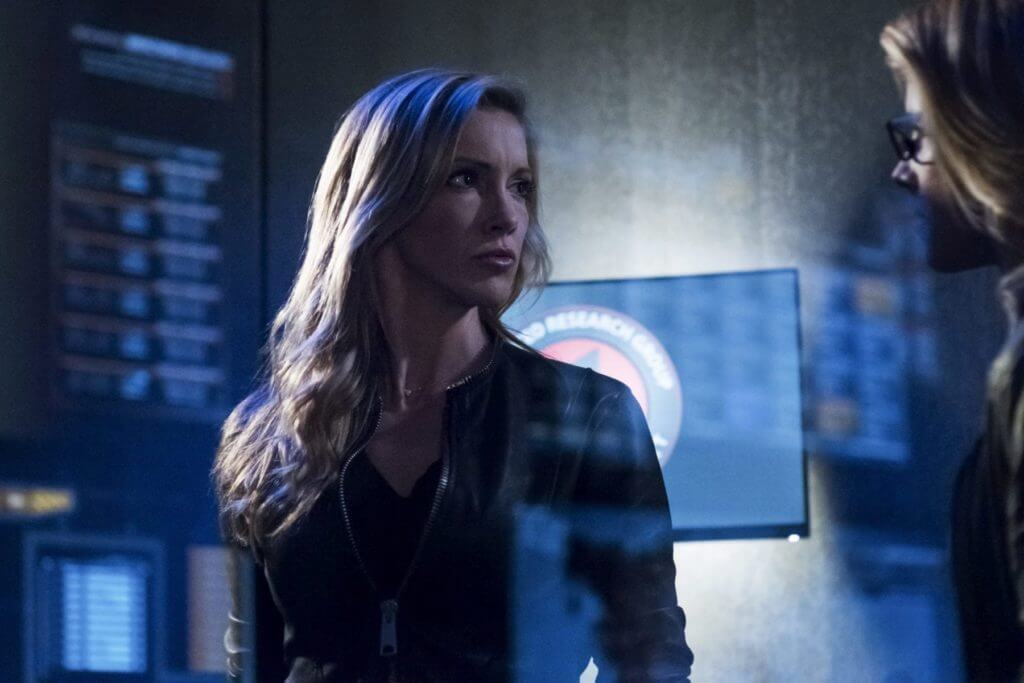 There are a few drawbacks to “Due Process,” though. The action isn’t up to Arrow’s usual high standards. It isn’t bad or anything; just not spectacular. The fight scenes aren’t inventive, as they often are, and they mostly just move the plot along. Diaz’s showdown with Diggle and the new Green Arrow is far from a show-stopper, for example, and while I think this is befitting a third-rate bad guy like Diaz, the show makes such a big deal out of him that you’d think he’d take a little more effort to defeat. There are also some odd plot elements. When Anatoly’s true intentions are discovered by the Russians Mob, the leader beats him as Diggle storms in for the rescue. As Digg is tangling with one of his henchmen, though, the boss pulls his gun and… aims at an immobilized Anatoly. Wouldn’t it make a lot more sense to shoot Diggle? Maybe it’s an honor thing or blind anger, but it still seems like a pretty stupid thing to do. Also not passing muster is Laurel’s reasoning for getting Oliver released from prison. He gave himself up to convince the feds to do their actual job and stop Diaz. Since the FBI botched the sting and can’t seem to keep Felicity and William safe, she argues that they welched on their deal and Oliver should be freed. I’m not a lawyer, but this doesn’t sound like it has even the slightest legal bearing. Oliver didn’t sign an agreement or anything; he just surrendered to the FBI and admitted to being the Green Arrow. Governmental incompetence isn’t a get out of jail free card. Turning Diaz over to the feds in exchange for Oliver’s freedom seems a little shaky too, but it’s easier to buy than saying “No fair” to a judge.

Despite these logical leaps and standard action, “Due Process” is an excellent episode. Team Arrow is back together (which may not be so great once the Little Rascals start taking more prominent roles, but for the moment it’s relieving), Felicity and Laurel are learning what it means to wear the mantle of “hero,” Diaz is finally caught (though I’m not getting my hopes up that we’re done with him), the future timeline is advancing, and Oliver’s prison stint is getting even juicier. This has been a stellar season so far.

“Due Process” is an excellent episode. Team Arrow is back together (which may not be so great once the Little Rascals start taking more prominent roles, but for the moment it’s relieving), Felicity and Laurel are learning what it means to wear the mantle of “hero,” Diaz is finally caught (though I’m not getting my hopes up that we’re done with him), the future timeline is advancing, and Oliver’s prison stint is getting even juicier.