"We killed Dracula, and now, we have to spend the rest of our lives making sure nobody brings him back from the dead?" 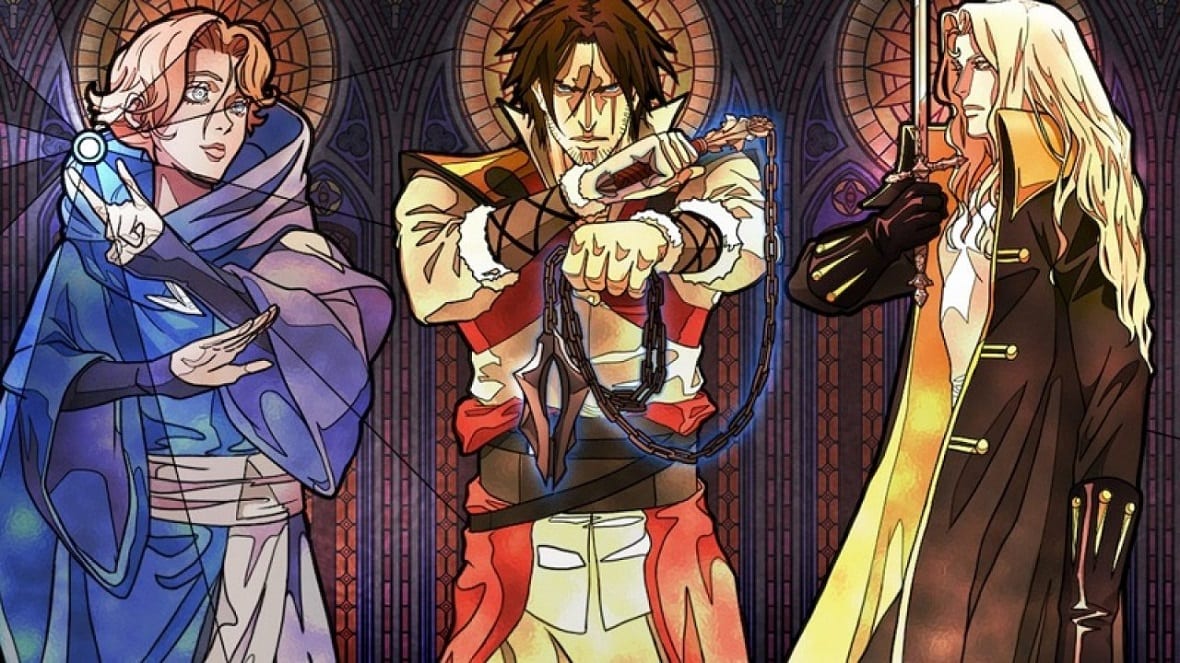 On Thursday, May the 13th, Netflix released the fourth and final season of Castlevania. The series is an adaptation of the Konami video games and wildly popular in its own right, spawning a vibrant fan community online with a spin-off supposedly on the way. The final episode of Castlevania is called “It’s Been a Strange Ride,” which describes exactly how I feel about this show. Back when season 1 premiered in 2017, I didn’t even know what it was. I chose to watch it because I was bored and it was animated. I thought it was just okay. The animation and action were good, but the four half-hour episodes didn’t allow the creators much room for character development and complex storylines. That changed quickly with season 2. As the show’s seasons got longer, there was an obvious focus on the characters and story that went beyond what many modern TV shows offer. The crazy thing is that the animation, which was previously the show’s biggest draw, got better and better! I can’t believe how this series has exponentially improved each year; I’m more accustomed to the opposite happening with shows I like. It’s wild to think Castlevania went from an alright first season the length of a feature film to the insanely detailed character arcs in seasons 2 and 3. Castlevania has become one of my favorite TV shows, and I’m really going to miss it. As bittersweet as this is, let’s take a look at the show’s final season.

Castlevania season 4 makes short work of catching us up to Trevor and Sypha’s exploits since the end of season 3. For six weeks, they’ve stumbled from one disaster to another, killing monsters and vampires along the way. Trevor and Sypha discover a group of vampires trying to bring Dracula back from the dead and kill them, but that’s not the end of the conspiracy. Meanwhile, Alucard receives a request for help from a nearby village under attack by vampires and night creatures. Carmilla loses patience with Hector’s progress on the night creature army and debates the goals of the operation with Lenore. In Targoviste, Sypha and Trevor meet Zamfir, a mysterious guard of the town’s royalty. In the village of Danesti, Alucard encounters Saint Germain and Greta, the town leader who requested his help. On Saint Germain’s advice, Alucard and Greta lead the people to Dracula’s castle for safekeeping. Little do they know Saint Germain has his own reasons for wanting them there. Sypha clashes with Zamfir over how she rules Targoviste, leaving the people to fend for themselves while demanding food tributes. Isaac and his night creatures descend on Carmilla’s palace and attack her — but she takes her own life to deny him the satisfaction. Zamfir takes Sypha and Trevor to see the King and Queen, who just so happen to be rotting corpses that she believes contain magic that will return them to life. Dracula’s castle is besieged, and Trevor and Sypha arrive just in time to aid Alucard in the fight against the invading hoard of vampires and night creatures. 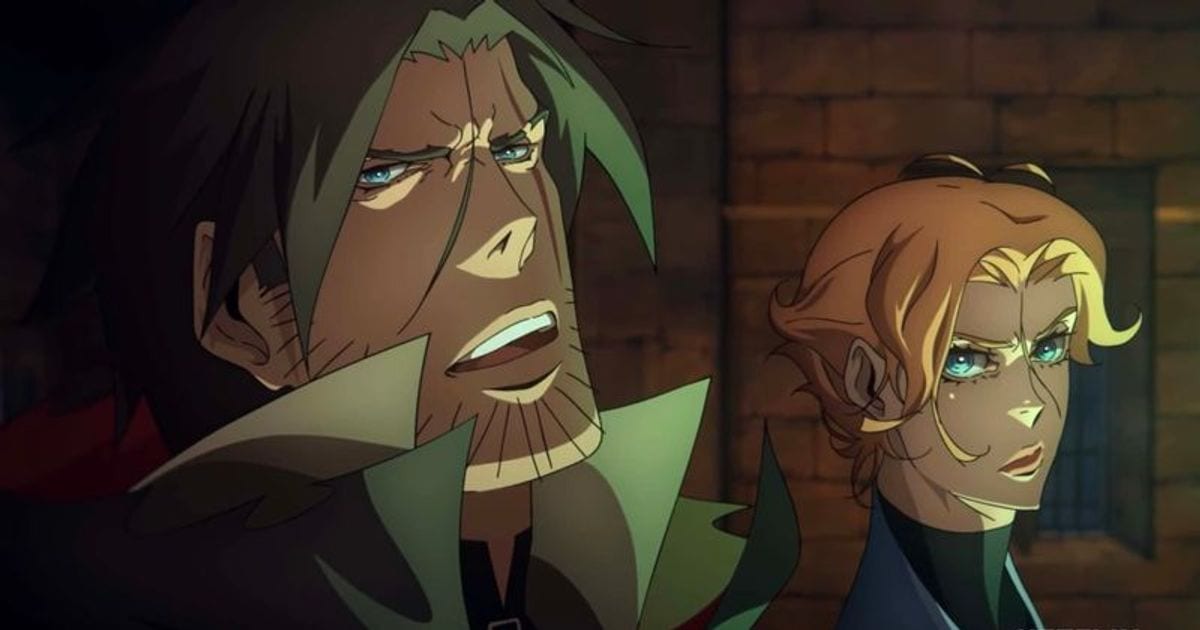 There’s a lot to talk about here. I’ll start with my favorite thing about Castlevania, its characters. I really enjoyed Alucard’s journey this season. In season 3, his subplot was about his fierce desire for companionship and how he’d do next to anything to keep it. In season 4, rather than Alucard yearning for interaction with humans, they seek him out. This season is an exploration of Alucard’s humanity after he was forced to display the worst of vampire nature last year. Time and again, he shows kindness and compassion to others, such as playing with the orphaned children of Danesti and letting them call him father. Alucard is one of my favorites on the show for sure, so I’m really glad he got a happy ending. In establishing the new town of Belmont, Alucard gets exactly what he always wanted: his friends by his side. I liked Trevor and Sypha’s subplot a lot, too, especially what they do with Trevor later in the season. There is one scene I didn’t care for very early on: Sypha berates Trevor for turning her into the kind of person that swears, obviously implying that all of her problems come from him or their relationship. I know people say things like this when they’re upset, but it bothered me that she never apologized. It happens, and it’s forgotten just as quickly. I loved the two of them kicking ass across Eastern Europe, and it was pretty funny how Trevor reacted to the Dracula shrine. I will say that it felt like Trevor and Sypha were taking a back seat for the other characters for much of the middle of the season. They’re the leads, but it didn’t feel that way for part of this season. However, it starts with them, and they get a satisfying ending. Besides, this show has so many great side characters that it’s understandable they would cumulatively take up a chunk of screen time. I just maybe would have spaced it out differently, so it’s not a lot of Trevor and Sypha at the ends with very little in the middle episodes. The fake-out of Trevor’s death really got me, I must admit. With Sypha carrying his child and Alucard naming the new town in his honor, I may have had some sawdust in my eyes. The way they reveal that he survived is perfect, too. Sypha is upset with him for scaring her but also overjoyed to be reunited. I laughed out loud at Alucard’s joke about naming the village “Trefy,” a reference to the root of Trevor’s name, which he finds embarrassing. I really believe they couldn’t have left the three leads in a better place narratively.

The entirety of episode 4, “You Must Sacrifice,” was dedicated to Saint Germain’s introduction to Alucard and backstory. To add insult to injury, much of this backstory was already seen last season, so it could have been curtailed considerably. I did like what they did with Saint Germain overall, and was consistently surprised. I’ve spent all this time since season 3 expecting Alucard to turn evil and fight his friends. Little did I know there would be a good guy gone bad, but it was our boy Saint Germain. Bill Nighy brings his all to this role again, offering further proof that he’s an amazing, underrated actor. Unsurprisingly, Isaac had one of my favorite stories and character arcs this season. All those encounters with kind humans actually did have an impact on him after all, it seems. He allows Hector to live, going instead for the real threat, Carmilla. And even that he does out of fear of what she would do to the world, not petty revenge. Isaac was always a fascinating character with a unique moral compass. But now, he’s putting his talents to the betterment of humanity rather than its destruction. You love to see it. I wasn’t really into Striga and Morana being out and about. This was really just an excuse to have two separate groups of major characters doubt Carmilla’s plan, the other being Hector and Lenore. They didn’t get too much screen time anyway, but this was redundant, and these two are boring without Lenore and Carmilla. 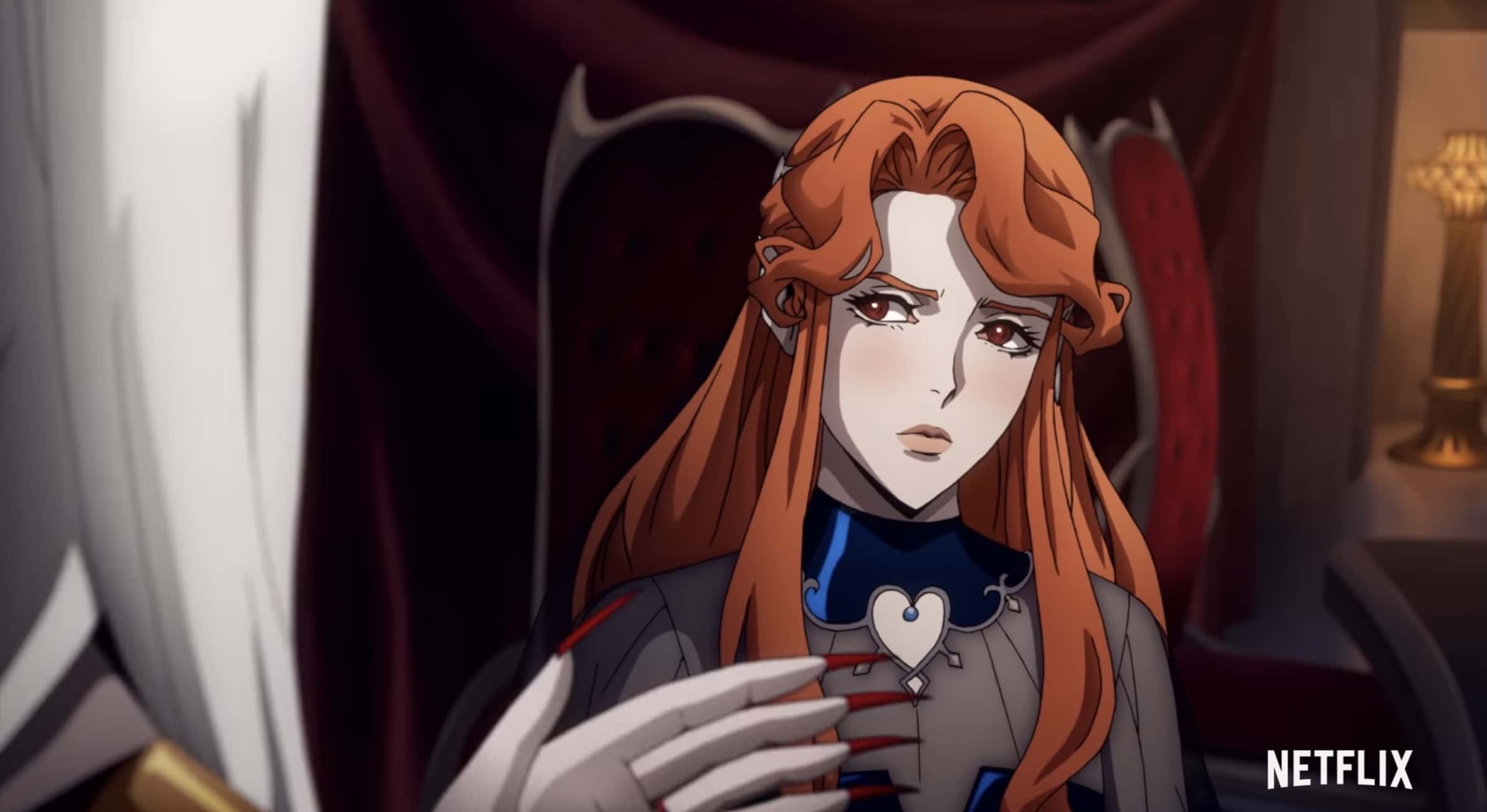 Malcolm MacDowell voices Varney, a new vampire villain who proves to be more than he appears this season. I have to say, I didn’t expect him to pop up, and he delivers intimidation and charm in spades with this role. Marsha Thomason plays Greta, the headwoman of Danesti village. I appreciate the role this character plays in the story and Alucard’s character arc this season, but she is incredibly dull and self-righteous. I feel similarly about Zamfir; she served her purpose but didn’t make much of an impact. The new characters were a relatively weak batch overall, which is not a problem this show usually suffered. The new side characters stole the show in parts of seasons 2 and 3. They floored me with the show’s epilogue, which shows that Dracula and Lisa are now alive again. I have heard that Dracula is constantly dying and resurrecting in the games, so it fits, and it opens up so many possibilities for the spin-off. Either way, that show’s going to have a lot to live up to, and I look forward to checking it out.

Trevor Morris returns to provide the musical score for season 4, and it’s pretty good. I think seasons 2 and 3 actually had more memorable, emotional scores, but this one is good. It serves its purpose. When it comes to the animation, however, oh boy. Can you say eye candy? This is Castlevania at its most visually arresting, and that’s saying something. Did the animators sell their souls to be able to achieve such artistic feats? Almost every frame could be a fine art print. The colors, linework, character animation, visual effects; all of it is just amazing. I just can’t believe how much and how consistently the look of this show has improved, especially given that it already looked good in season 1. The action sequences are absolutely mind-blowing this season as well. Striga charging on the humans in her “day armor,” Isaac vs. Carmilla, and especially the three heroes back in Dracula’s castle are God-level fight scenes. The movements of the characters and their weapons are incredibly fast but so fluid and clean you can always follow what’s going on. The visual horror was also on point this season. I guess the rebis isn’t the scariest thing you can think of on a visual level, but the idea disturbed me greatly. Castlevania is a master class in serialized animation, and everyone should be taking notes. 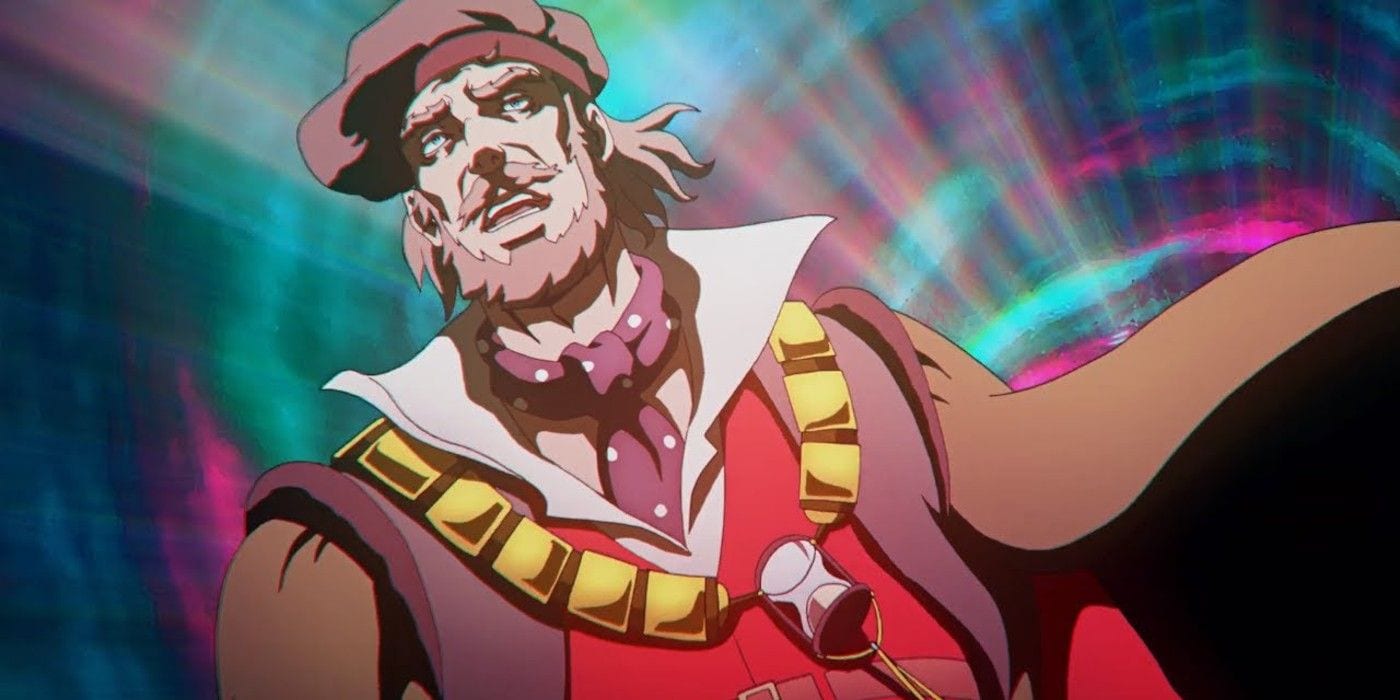 Overall, I really enjoyed season 4 of Castlevania, and I think it’s a satisfying conclusion. It’s not perfect, and I think season 3 is still better. Some of the new side characters were boring or annoying, and I probably would have rearranged some of the scenes for pacing reasons. But honestly, I love what they did with Alucard, Trevor, and Sypha, and that’s what counts the most. Isaac also got quite a satisfying story this season, and while I’m sad about Saint Germain, he got what he deserved. Justice was served to Carmilla, the heroes got their just rewards, and the animation was unbelievably gorgeous. I’m really going to miss this show. I’m more than okay living in a world where season 3 is Castlevania‘s best; most shows would love to have such a thematically rich piece of storytelling.

I really enjoyed season four of Castlevania, and I think it's a satisfying conclusion. It's not perfect, and I think season 3 is still better.

Also, this might sound too much, but I am going to go as far as to say Castlevania is in my top 10 favorite tv shows of all time.

I did not like season 3, especially Alucard’s side. I felt it was a waste and I didn’t like what they did to him in bed. That seemed like a SJW move and unnecessary. If they entrapped him only just to do something to him, that would’ve been enough. Maybe if they took him down the dungeons for some creepy ritual to practice on him, as a way to fight vampires as they wanted, that would’ve been better. But no, they go with sexual approach. I hated that scene. I would just erase Alucard’s side if I ever get the DVD to edit myself but I enjoyed season 4 WAY more than season 3.