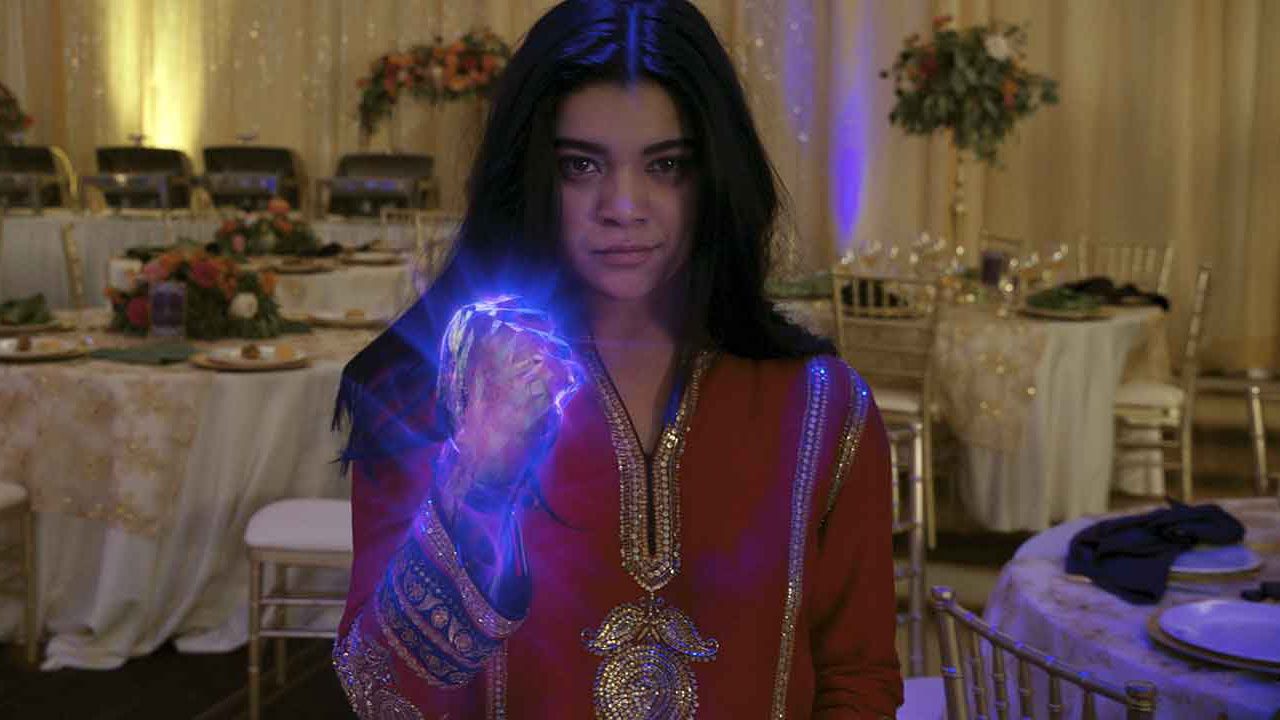 Remember the Honest Trailer about Revenge of the Sith (back when they were funny)? There’s a line in it that says Revenge of the Sith is “the best Star Wars prequel by default simply because something occasionally happens.” That’s “Destined,” the third episode of Ms. Marvel, in a nutshell. It’s the best one yet because there’s an actual plot – of sorts. It’s also got one really good scene and an explanation for the fantastical things that have been happening. But there’s still plenty of overwrought fluff with Kamala’s family that stops the story in its tracks, and the fight scene is so poorly filmed that it negates the relief of finally seeing some cool superhero action.

Kamala learns about her heritage, her grandmother, her rescuers, and the secret of the bangle. Bruno is suspicious of Kamala’s new friends. Damage Control intensifies their hunt for the superhero in the Pakistani community. Nakia’s election is held. Aamir and Tyesha’s wedding arrives. A Twinkie is used for humor; Al Powell disapproves.

“Destined” opens with an exposition dump, but a welcome one because it’s time to get on with this story already. Najma, the woman in the car from last week – and Kamran’s mother – is not, as I wrongly assumed, also Kamala’s grandmother, but she did know her. In fact, they’re both Djinns from another dimension, and they went on a tomb raid during the British occupation of India to find the magical bangles that would send them home. That makes Kamala part Djinn, I guess, which is why she can tap into the bangle’s power. Now, Najma and her fellow Djinns want to use the bangle to get back to their world, and Kamala is stoked because she finally has someone only she can help.

Of course, we all know it won’t be that simple. “Destined” reveals that Najma is the villain and that she doesn’t care that her trip back home will cause an explosion that will kill anyone nearby. (It reminds me of Glory in the fifth season of Buffy; returning to her home dimension was what she wanted as well, and destroying other worlds didn’t even qualify as an afterthought to her.) So callous is she that she won’t even wait for Kamala and Bruno to try to find a safe way to send her back, choosing instead to attack Kamala’s family to get the bangle. I sound like a broken record with these Marvel shows, but it’s true nearly every time: they’re both too long and too short. The time the first three episodes waste on silly nonsense is a drag that tempts you to fast-forward, but the character development is so nonexistent that people turn on a dime and it has no impact. If they’d cut the chuffa and introduced Najma and Kamran earlier, her villain reveal – and his turning on her to help Kamala – could have been more surprising and, with a better setup, have had more of an impact. Instead, they’re just empty plot points because something eventually had to happen.

Once again, the family element is more successful, but only slightly, and almost entirely because of Kamala’s mother. I’m starting to think she’s the show’s best character aside from Kamala, and maybe even including her. She feels the most like a real, three-dimensional person, and the best scene in “Destined” is the one where she comforts Kamala and urges her to trust her family and take comfort in their love for her. Zenobia Shroff is excellent as the mother who is the hardest on Kamala but loves her more than anyone. Unfortunately, this great moment is overshadowed by Kamala’s father and brother acting like buffoons and the seemingly endless focus on Muslim culture to the detriment of the plot. On the day before Aamir’s wedding (or maybe it’s the day of the wedding; it’s hard to tell), Kamala’s family serves a lavish meal, and the food is highlighted almost comically, with the camera focusing in while music plays. It’s like they’re saying, “Look how weird,” once again making a joke of Pakistani culture instead of getting anyone invested in it. The wedding itself is a little better (aside from Aamir and Tyesha taking their vows, which makes them look like idiots), but the dance scene goes on so long that it gets boring, and again, the plot suffers. They still haven’t figured out how to make the two worlds Kamala is torn between complement each other from a narrative perspective. 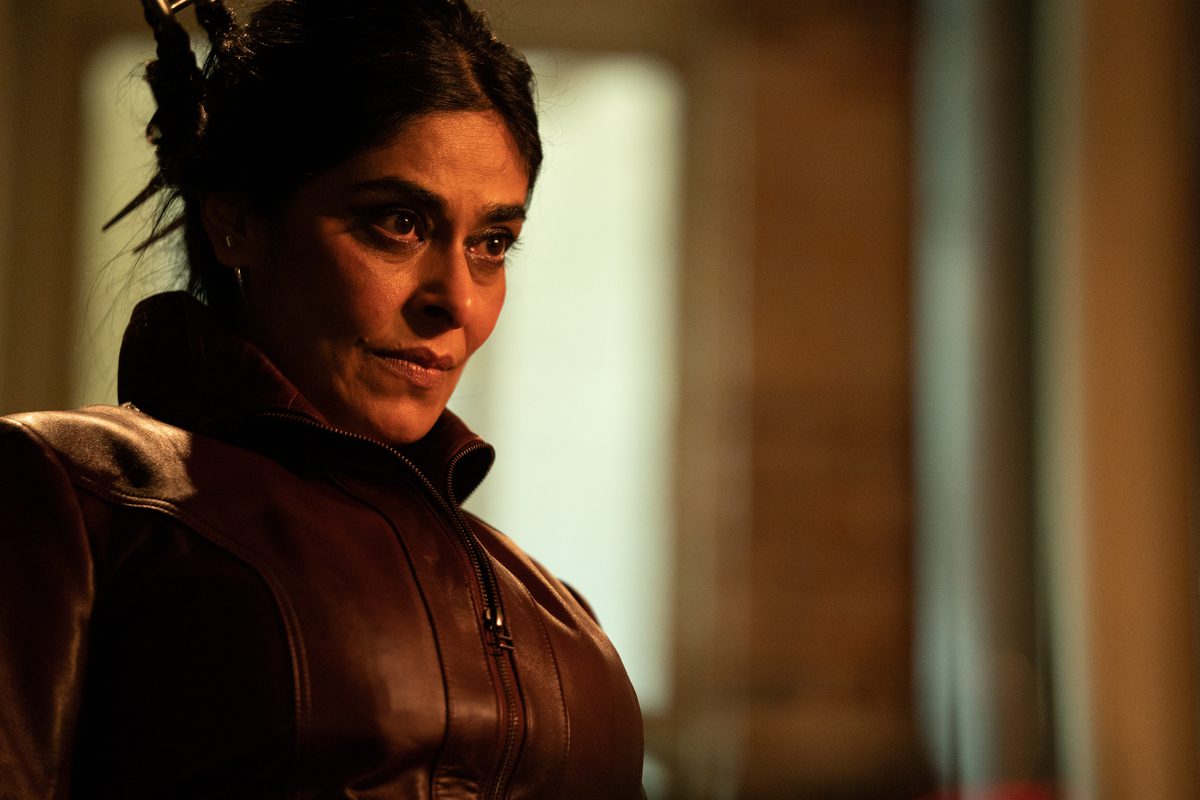 “Destined” would have been a great episode to finally do that, too, because Kamala’s worlds collide when Najma and her henchmen attack the wedding. But Kamala sets off the fire alarm and evacuates her family before anything happens, so both sides of Kamala’s life are kept separate again. But at least the action is finally starting, right? Well, yes, it’s good to see some supervillains challenge Kamala, but the scene is bereft of tension. At first, Kamala sneaks around the kitchen like the kids in Jurassic Park, only there’s no logical sequence of movements to the hunt, and the layout of the kitchen is never established. Kamala is about to be found by one of the Djinns, but she just disappears until she’s revealed to have crawled away so silently that someone standing a foot away from her didn’t see her. When the action starts, all the ingredients for a good fight are there; everyone is in a room where we understand the geography better (partly because it’s just a big event room with some tables; “play to your strengths” is a relative notion sometimes), and the Djinns each have a different magical weapon to use against Kamala. But the action is boring because it’s so lazily filmed and edited. None of the attacks feel like they’re going to hurt, and Kamala’s intermittent – and subconscious, it seems – use of her powers doesn’t feel desperate, like she’s barely surviving. This should have been where she comes into her own and learns how to fight with the bangle on the fly, but it looks cheap and is devoid of wonder.

Kamala doesn’t even finish the fight; she’s rescued by the Damage Control agents, who take down the Djinns like they’re shoplifting teenagers. So not only does “Destined” waste another opportunity, but the villains have whatever teeth they had effectively removed. If they’re setting up Damage Control to be the real bad guys, I’d be okay with that; I’d love for the MCU to get back to its individualist message and off of this “shut up and do whatever the government says” narrative (the worst of which was found in Loki). But I don’t think that’s what’s going on, and now it’ll be hard to care when Najma next threatens Kamala. What I much prefer is the message that the imam gives to Kamala about making mistakes and learning from them. Kamala isn’t a Mary Sue, which is refreshing, and the show allows her to screw up so she can grow; if it would only show her growth better, we’d be on to something. (I could have done without her comment about having a superhero to protect Pakistani Muslims too. Can we please get off the “all the Marvel heroes you like are actually racists” train, please?) Other than that, Nakia wins her election (off-screen, because God forbid they act like anything is important), Bruno still clearly loves Kamala, and the story is headed to Karachi. “Destined” is better than what’s come so far, but it’s far from good.