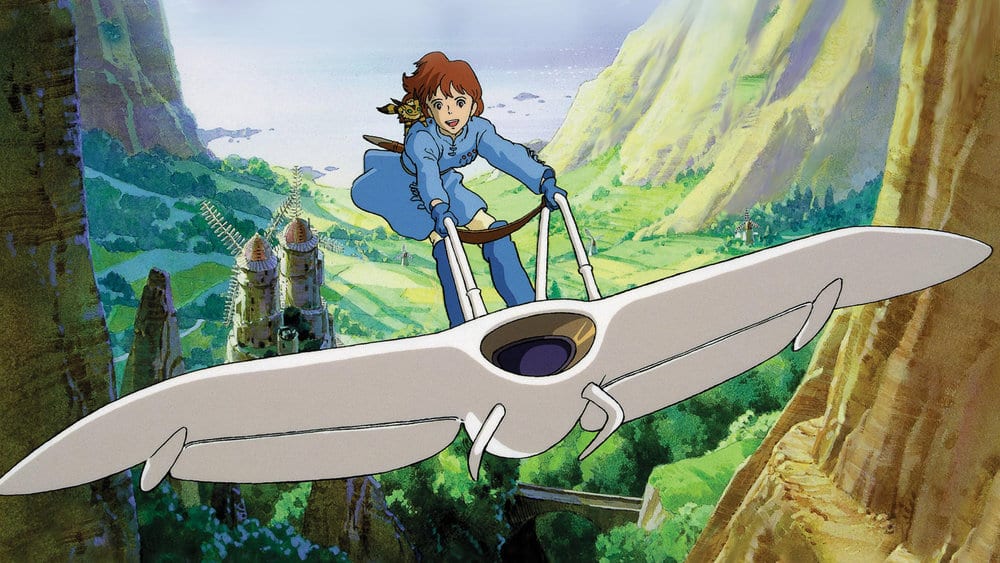 When I watched and reviewed Earwig and the Witch last week, it got me thinking about Studio Ghibli as a whole. This was their first film in six years (seven for us here in the United States), and it was disappointing to most fans, to say the least. However, it’s worthy of note that a bad movie (or even a mediocre one) from Studio Ghibli is such a big deal. Most studios make bad movies as often as good ones, if not most of the time. Even Pixar, who led the pack of Western animation studios for over a decade, is hit-or-miss these days. Studio Ghibli has had a couple of films that weren’t as well-received before; Tales from Earthsea, also directed by Goro Miyazaki, comes to mind. I’ve seen several of the studio’s films over the years, and for the most part, I’m a fan. I don’t love their whole catalogue as much as others do, but some of their films are among my favorites of all time. I’d like to take a look back at Studio Ghibli’s feature films, one-by-one and in order, to talk about some of my favorites and catch up on movies I never saw. The studio’s first feature film release came in 1984 in the form of Hayao Miyazaki’s Nausicaä of the Valley of the Wind, an adaptation of his own manga of the same name. It was Miyazaki’s second feature film overall, after 1979’s The Castle of Cagliostro, though he was also involved in publishing and TV efforts in-between his movies. The story was inspired by Princess Nausicaa from Homer’s Odyssey, as well as a Japanese folktale called “The Princess Who Loved Insects.”

Nausicaä of the Valley of the Wind takes place 1,000 years in the future after a nuclear war has destroyed modern civilization as we know it. The film finds our eponymous protagonist (Alison Lohman) exploring the abandoned shell of an Ohm – huge, insect-like beasts that roam the land and terrorize humans when enraged. Her search is cut short when she hears a call for help from Lord Yupa (Patrick Stewart), a dear friend who is being chased by a live Ohm. Nausicaä uses a mixture of tricks and empathy for the Ohm to calm it and compel it to return home. Lord Yupa is surprised and impressed with Nausicaä, who we learn is the Princess of the Valley of the Wind. He gives Nausicaä a fox-squirrel he rescued from the Ohm, and she names him Teto. They head home, and Lord Yupa informs Nausicaä’s father, the King (Mark Silverman), that all of the villages he’s found have been ravaged by the toxic jungle created by humanity’s wars and pollution. The Valley of the Wind is the only territory safe from the jungle, shielded by a sacred forest of trees with special properties. The safety and way of life of Nausicaä’s people are threatened when Kushana (Uma Thurman) and Kurotowa (Chris Sarandon) of Tolmekia invade with an army, kill the King, and occupy the Valley. Kushana even forces the Princess to come with her on a dangerous mission to destroy the Ohm and the toxic jungle itself. It’s up to the idealistic young Princess to save the Ohm, the jungle, and the people of the valley, and expel the invading Tolmekians. 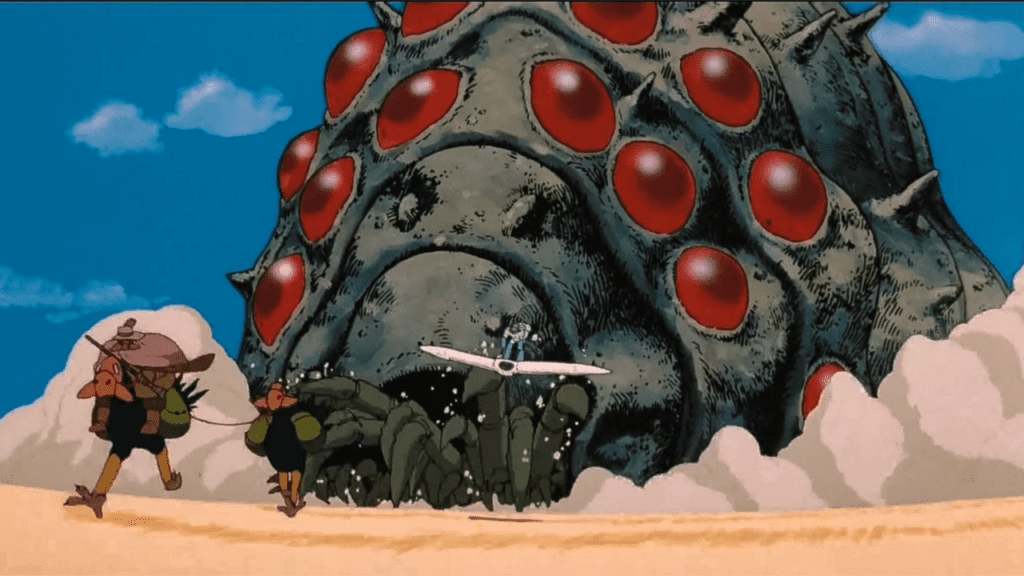 I saw Nausicaä of the Valley of the Wind once while I was in high school. Going in, I didn’t remember much aside from liking it and thinking it was similar to Miyazaki’s later film, Princess Mononoke, which is easily a contender for my favorite Studio Ghibli film. However, I found these associations to be surface-level when I rewatched Nausicaä of the Valley of the Wind. Both films explore the destruction and protection of the environment and the harsh, pointless evil represented by war. However, these are ideas Miyazaki would return to even in his lighter, more uplifting films. He was born in 1941 and raised in postwar Japan, and the bombing of Utsunomiya, where he lived at the time, left a lasting impression that has colored much of his work. I think his films appeal to so many because these are universal themes that we can all understand, even if we (thankfully) haven’t experienced them firsthand. Equally as important is that Miyazaki’s films aren’t nihilistic or needlessly bleak. His characters endure violence and loss, but there’s always hope for a better future, and, usually, that’s what they’re striving for. One can also appreciate his penchant for fantastic settings and the fairy-tale-like sense of wonder and magic the films tend to feature. At the end of Princess Mononoke, there’s hope for better things to come despite the death of the forest spirit. But Nausicaä of the Valley of the Wind goes a step further; Nausicaä herself fulfills an ancient prophecy and frees her people from the grasp of the Tolmekians. 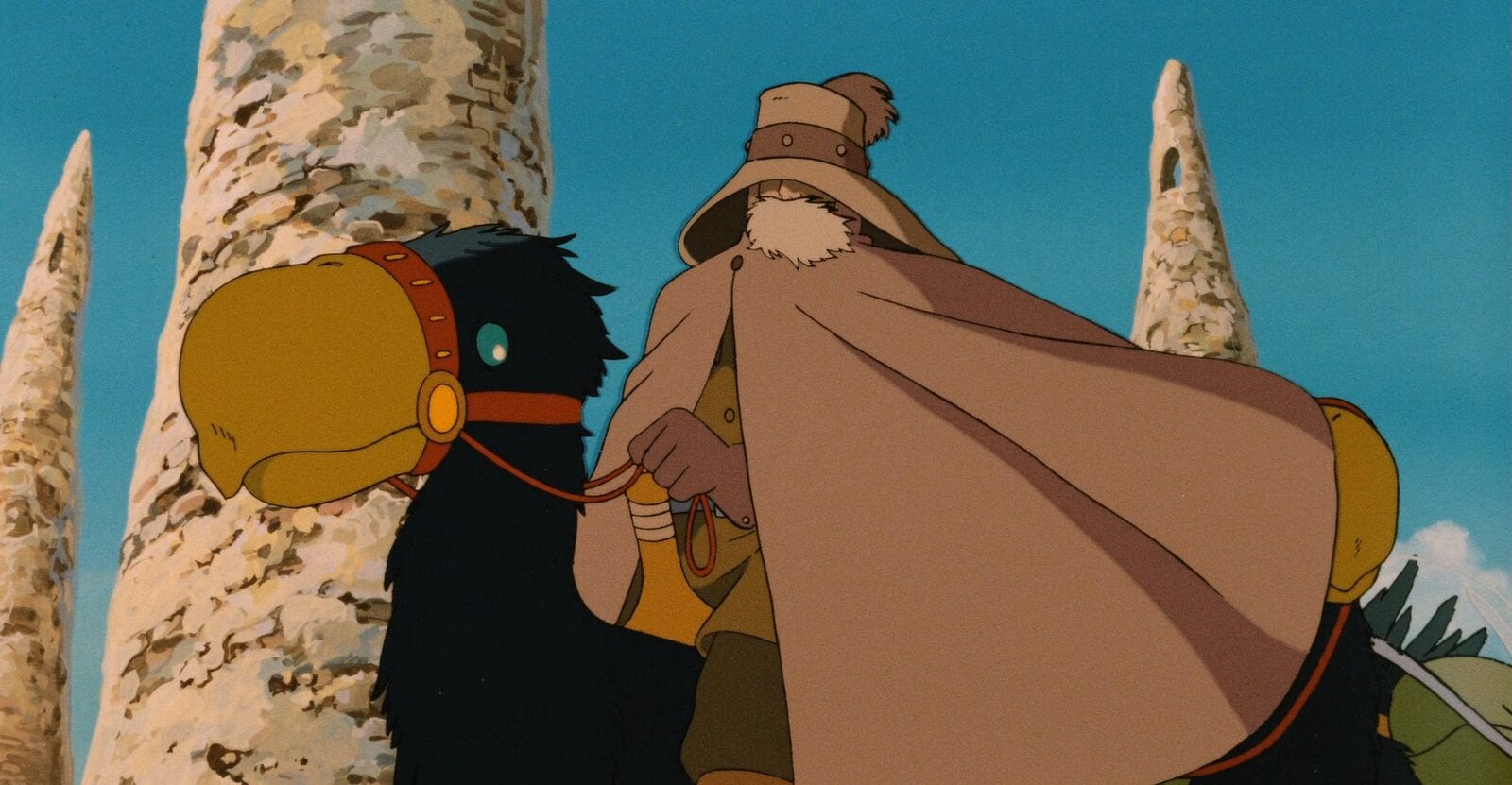 Nausicaä is also a more likable, if less complex, protagonist than Princess Mononoke. She’s a bright-eyed pacifist, full of love for people and animals alike, which is why it’s so hard to watch what Kushana and her ilk put her through. Kushana is also very unlike Lady Eboshi from Princess Mononoke. The latter was a villain from the perspective of Mononoke and the animals and spirits within the forest but was working to protect and care for her own people. She was the only one willing to show kindness to lepers and prostitutes and was willing to do hard work herself. Kushana is the Princess of Tolmekia and has no respect or care for the people of the Valley or their customs. Kushana has the audacity to have Nausicaä’s father killed and then berate her for fighting back, saying she’s only here to talk. The film does nothing to explain why Kushana is the way she is, although the bit about her missing hand and something else that only her future husband will see is interesting. I really enjoyed Lord Yupa and the relationship he has with Nausicaä. He comes off as something of a second father to her. They both care a great deal for one another, as seen by the lengths either will go to when the other is in danger. Lord Yupa’s aide, Mito (Edward James Olmos), is funny, and his devotion to Yupa and the Princess is endearing. This is another fantastic cast, featuring Shia LaBeouf, Jodi Benson, Mark Hamill, and Tress MacNeille in the supporting cast. The film’s opening is narrated by Tony Jay, who also narrated the book in Treasure Planet, and played Frollo in The Hunchback of Notre Dame and Monsieur D’Arque in Beauty and the Beast. 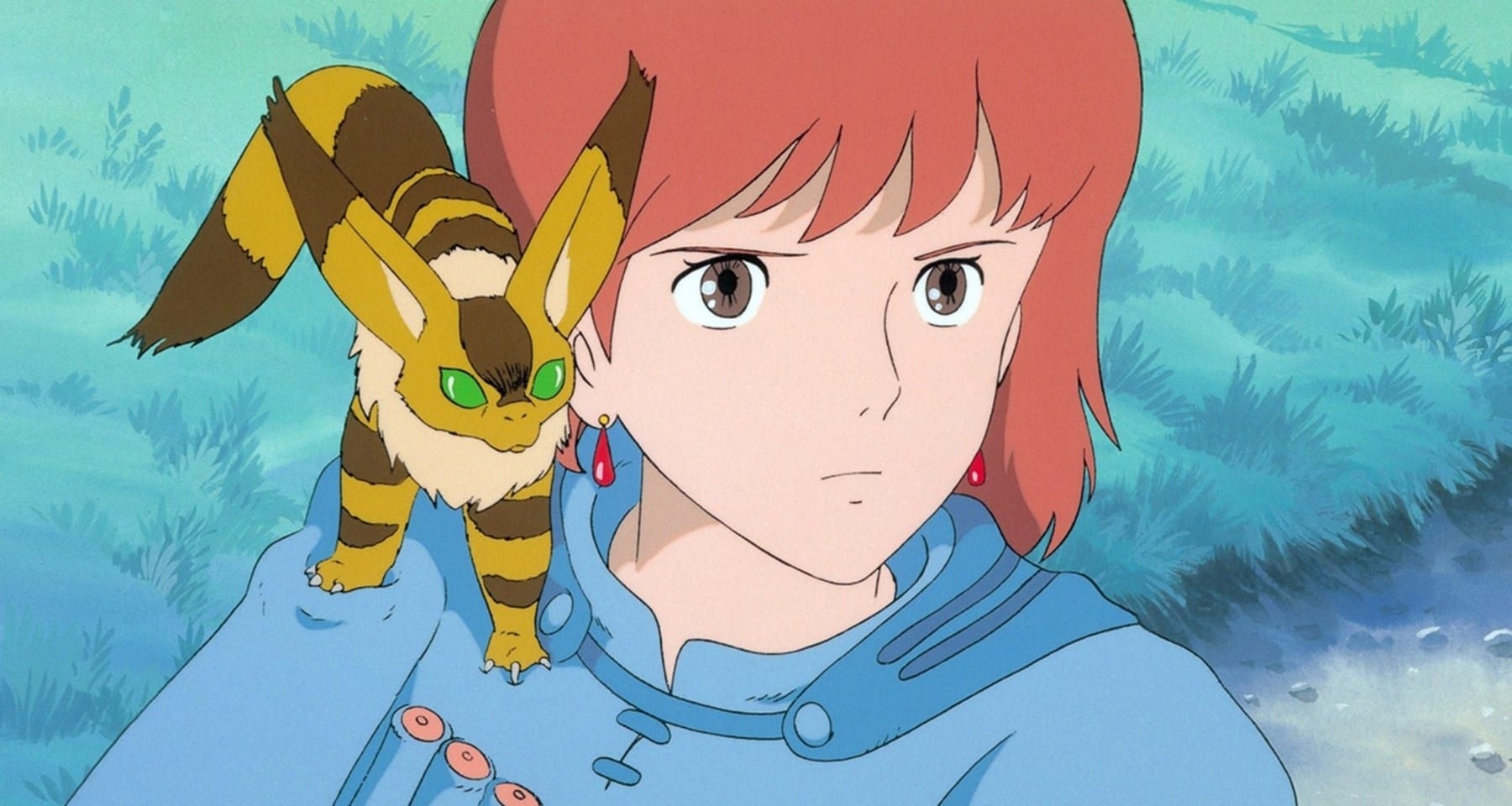 This film’s visuals are to die for, especially considering this was the studio’s very first movie and only Miyazaki’s second. The original score by Joe Hisaishi is very good, though not quite as impressive as later efforts. This is a personal taste thing, as some of the movie’s score sounds like video game music, which I don’t consider a good thing. On a side note, I love Nausicaä’s pet Teto. He doesn’t do much plot-wise, but he’s very cute, and I like the bond they develop throughout the film.

Nausicaä of the Valley of the Wind is very enjoyable and explores a unique setting and interesting themes. The characters are likable, if a little flat compared to later efforts. The film is worth waiting for the visuals alone.

I’m glad you liked it. Alison Lohman’s performance was fantastic, giving off emotion and passion as Nausicaa. This would be the first of the feminine performances in later Ghibli films in which I had decreed are my favorite of their career like Kirsten Dunst, Anne Hathaway and Kimberly Williams-Paisley. And of course I did enjoy Patrick Stewart in the movie. I’m surprised you never mentioned Chris Sarandon and his character. Looking forward to your next reviews on Miyazaki films and others from Studio Ghibli.

Thank you for reading! I thought his performance was good and the character was really funny. When writing these sometimes I get off on a tangent and forget some details I meant to cover.

Love the movie. It is a classic!

I remember this movie when I was a kid. The box art was nowhere even close to what the film showed lol

This movie is my favorite Studio Ghibli movie. I do recommend you read the manga, it really explain a lot of Kushana’s backstory.

Keep up the good work, Thanks.