"I'd rather be a pig than a fascist." 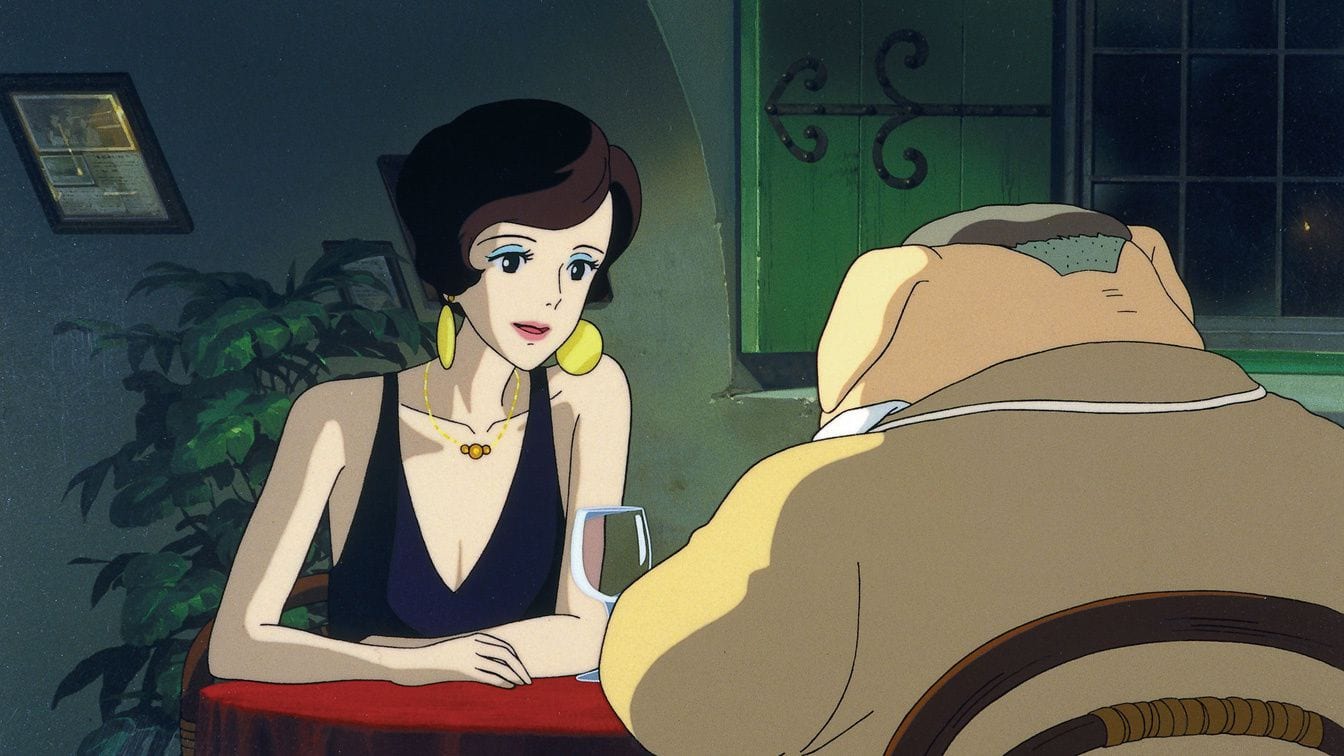 In 1992, Studio Ghibli released Porco Rosso. In some ways, Hayao Miyazaki’s historical fiction fantasy is more reserved than his earlier efforts, but it still maintains a sense of magic in the world. The film has a unique tone, balancing slapstick comedy with serious subject matter. Miyazaki has actually remarked that making this movie was foolish because it was an adult film made for children. I’ve never seen Porco Rosso before now, so I have no nostalgia or expectations hanging over the movie. Let’s have a look.

Porco Rosso (Michael Keaton) is a pig seaplane pilot who only flies for money, not honor. A mysterious curse turned the former WWI fighter pilot into a pig, pushing him to work as a world-class bounty hunter. When American pilot Donald Curtis (Cary Elwes) comes to the Adriatic islands, he strikes a bargain with local pirates to shoot Porco out of the sky. He succeeds at his task, but Porco survives and heads to Milan to have his plane repaired, much to the chagrin of his singing restaurateur friend Gina (Susan Egan). The Italian secret police have it out for Porco, and returning home isn’t safe for him, but nonetheless, his repairman Piccolo (David Ogden Stiers) and his granddaughter Fio (Kimberly Williams-Paisley) harbor him and work on his plane. When the secret police find out where Porco has been hiding, he’s forced to return to the Adriatic with Fio in tow to continue making repairs. Upon arrival, Porco and Fio are found by the pirates, who insist on a rematch. Curtis comes out of the woodwork and challenges Porco to a bet. If Porco wins, Curtis will pay all his repair bills, but if Curtis wins, Fio must marry him.

It’s apparent almost immediately what Miyazaki meant about Porco Rosso being an adult movie made for children. There’s a lot of physical comedy with Curtis and the pirates, which gives their sequences a light-hearted, carefree feel. Meanwhile, scenes with Porco and Gina, Fio, or even his old war buddy look and feel like a completely different movie. I have no problem with this; I get bored during movies that produce the same emotion throughout. For example, I don’t usually care for thrillers because they tend to focus only on building tension the entire time. I’m not saying that’s a bad thing or that it can’t work; it’s just personal taste. I like that Porco Rosso has a dynamic tone and mood because it always keeps me invested in what’s going on. Sure, I find the political intrigue of the time and Porco’s personal struggles more interesting than the pirate antics. But the presence of the comedy keeps the film moving and never lets the story become stagnant. 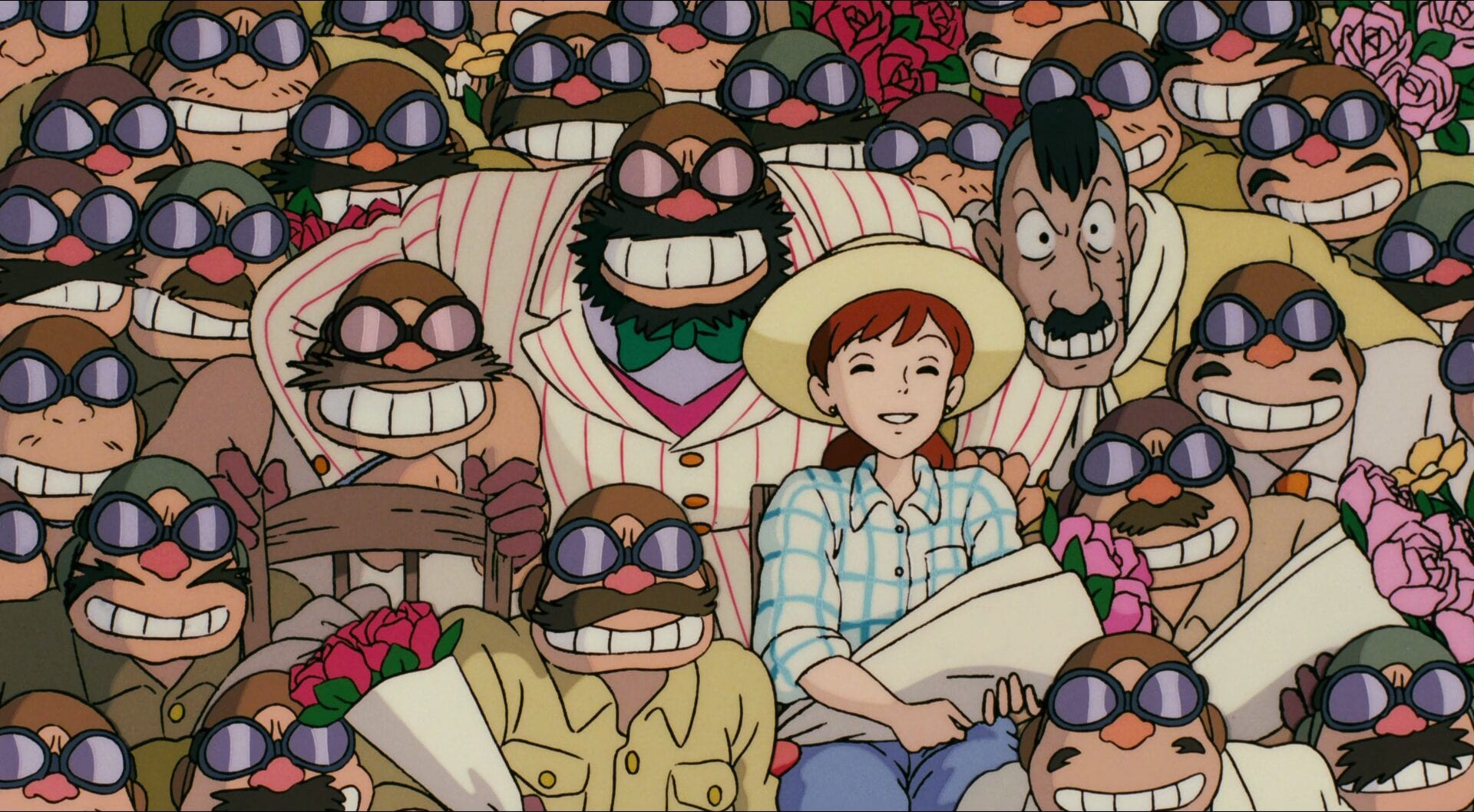 I also like the characters in Porco Rosso, especially Porco himself. He has excellent chemistry with every other character in the film, and I like his backstory. The scene where he tells Fio about his experience flying into the clouds is one of my favorites in the movie. Keaton’s line delivery here is just the right mix of nostalgic and bitter, and it’s a visually stunning scene. I like that, while Porco is cursed to look like a pig, the film doesn’t center on the curse or breaking it. Instead, it shows how unlike a pig he is with his feats of bravery and sticking up for Fio. I like Gina a lot too. She gets several of my favorite lines, such as telling Curtis why love is more complicated in Europe than he would understand as an American. Her monologue to Porco about her pilot husbands who died in the air is spectacular, too. I like how this later connects to her insistence that he does not return to Italy for fear of death. The dialogue between Gina and Porco is excellent, and I really like how the film shows their relationship. Gina is voiced by Susan Egan, who played Meg in Hercules and Belle in the original Broadway run of Disney’s Beauty and the Beast. She’s a phenomenal actress and knows how to bring out the emotions in her voice. I wish she did more voice work. Cary Elwes brings a lot of humor to the film as Curtis, and his American accent is funny and convincing, if a bit stereotypical. Even the pirates sport impressive credits, being played by the likes of Brad Garrett and Bill Fagerbakke. 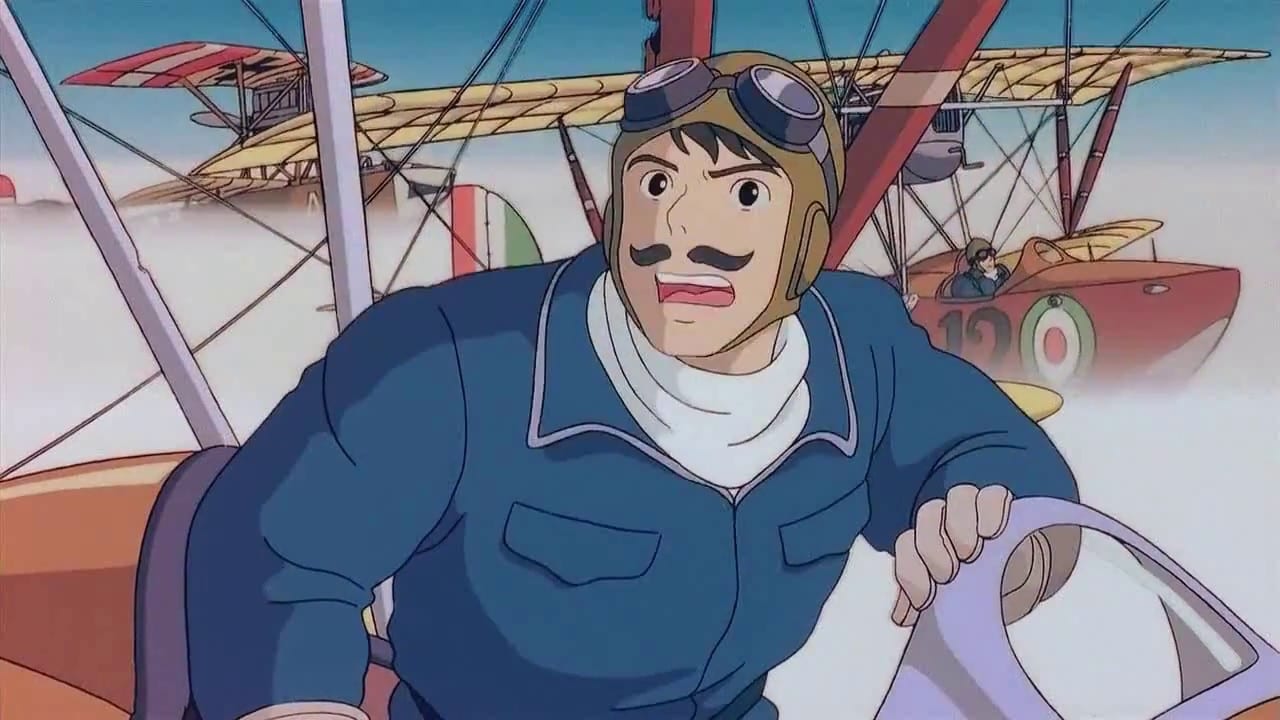 Porco Rosso’s original score was composed by Joe Hisaishi, and it’s breathtaking. This is the type of music you could listen to in the background to relax. The film is also animated in excruciating detail, and the landscapes are particularly stunning. I appreciate the contrast between the subtle character animation on Gina and Porco and the more bombastic expressions of the pirates. Visually, some of my favorite moments include Porco and Fio soaring in the plane, as well as any time the camera lingers on the buildings. Houses, other buildings, and especially Gina’s gazebo are incredible to look at. 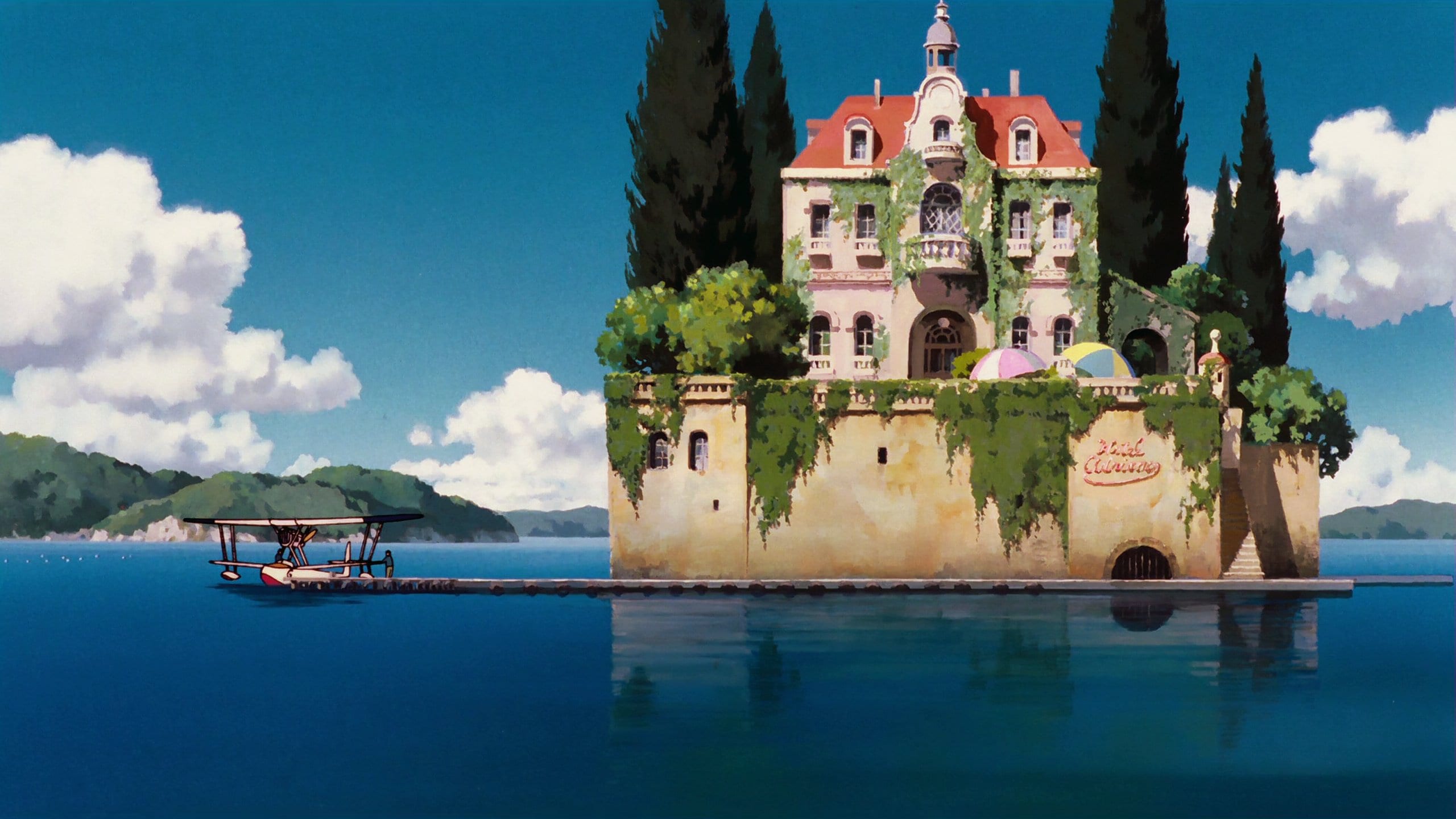 I feel like I don’t talk about the editing of movies very often, mostly because, in most movies, it doesn’t stand out to me. That’s not always the case, though, and Porco Rosso is edited supremely well. The scene in the cinema with Porco’s friend comes to mind, as well as the cut when Porco tells Gina, “Face it, I’m a pig.” Both scenes pair memorable dialogue with striking cuts that grab your attention. This may be a strange comparison, but the last time I was this impressed with a movie’s use of editing was Infinity War. When a dramatic or comedic beat takes place, and I go “Cut” in my head, and the scene actually changes, it’s strangely satisfying. 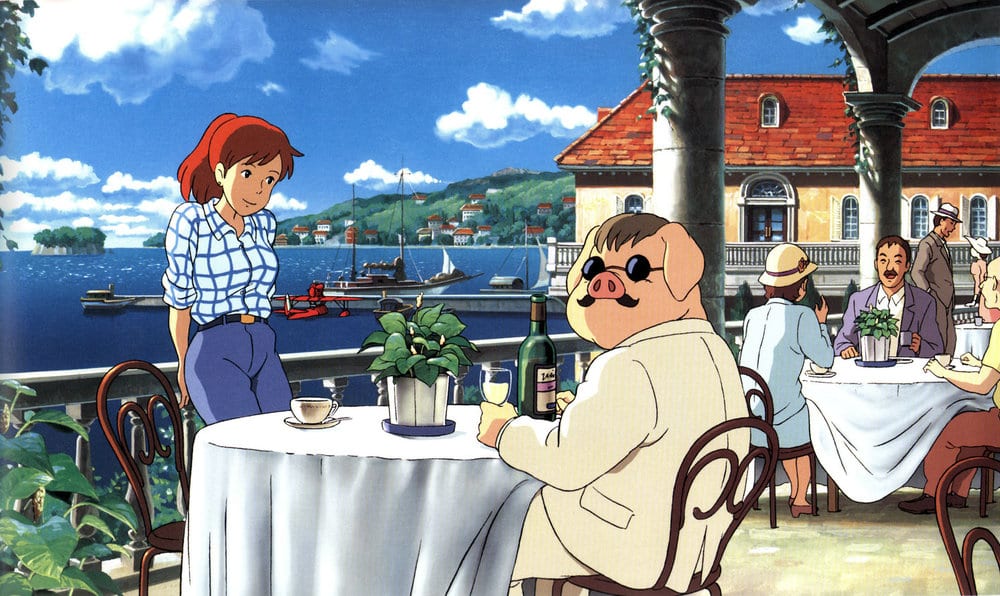 I’d never seen Porco Rosso before, but I have to say that I’m impressed. This movie has an unusual concept, an unconventional leading man, and I wasn’t sure what to expect. From the casting down to the way it’s edited, every aspect of this film floored me. The only reason Porco Rosso isn’t a solid 10/10 for me is that Studio Ghibli has done movies that I think are even better. And you know what? That’s pretty amazing.

I’d never seen Porco Rosso before, but I have to say that I’m impressed. This movie has an unusual concept, an unconventional leading man, and I wasn’t sure what to expect. From the casting down to the way it’s edited, every aspect of this film floored me. The only reason Porco Rosso isn’t a solid 10/10 for me is that Studio Ghibli has done movies that I think are even better. And you know what? That’s pretty amazing.

I agree with what you’ve said like the characters and the performances. I didn’t expect the channeled accents that Cary Elwes and David Ogden Stiers gave to their characters and I liked Michael Keaton’s channeling of Humphrey Bogart and Michael Douglas into Porco. I’ll might have to rewatch it again, but I know that Kimberly Williams-Paisley was my favorite. It just seem to stick like Alison Lohman or Anna Paquin if you know what I mean. I love how Fio had intimidated the pirates enough for them to dote over her just like what happened in Castle in the Sky.