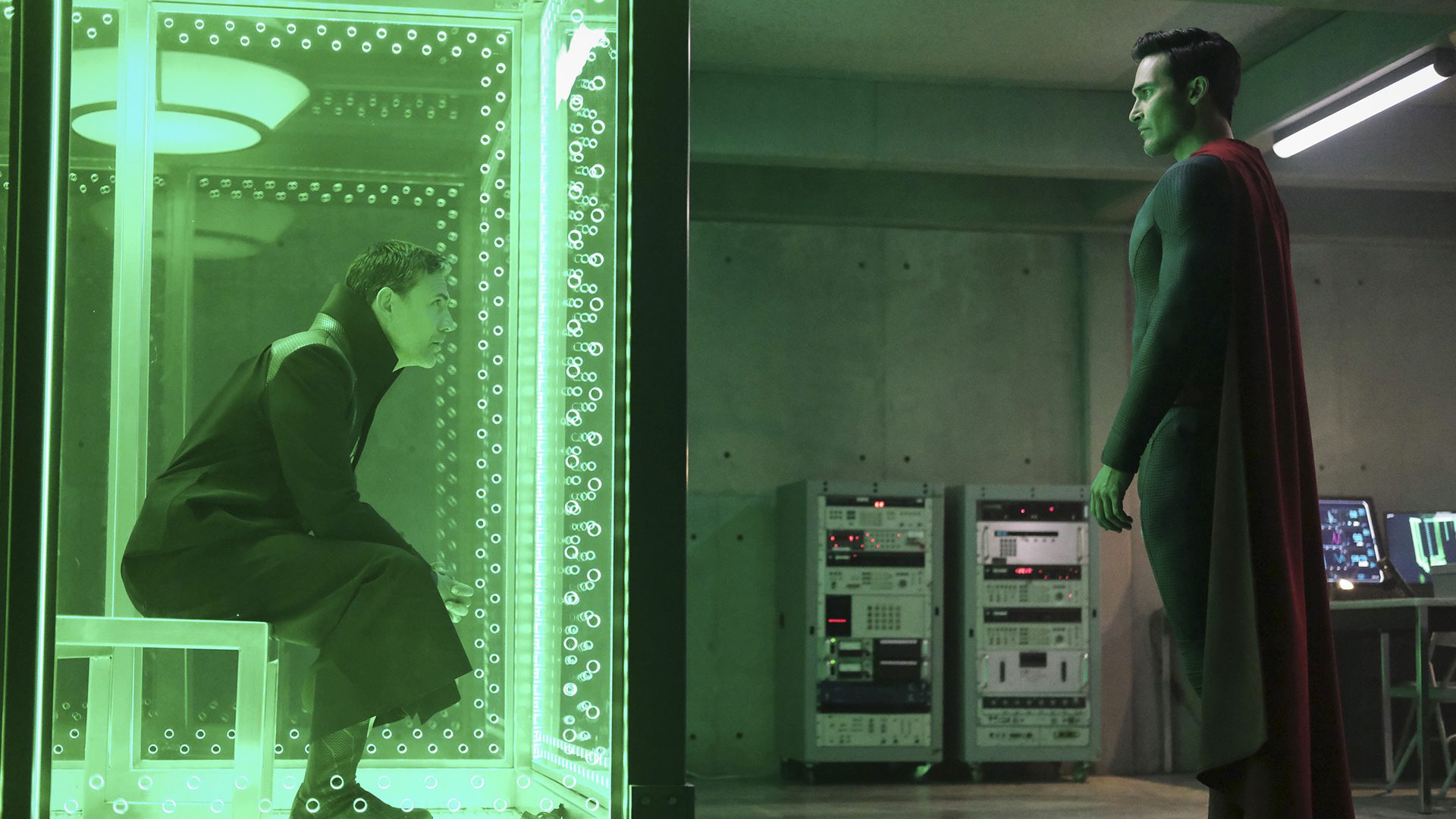 “Fail Safe” is one of those “taking stock” episodes following a big event. It isn’t flashy or exciting, and it won’t be anyone’s favorite, but it’s important to catch up with the characters and see how something as cataclysmic as humanity almost being wiped out by a psychotic alien who’s brainwashed Superman affects them. It also presents an intriguing discussion about the nature of good and evil and whether our morality – or lack thereof – is learned or inherent. But with that in mind, it makes some missteps in a few scenes, particularly with Lois.

Superman questions an imprisoned Morgan Edge as he seeks out the last of his half-brother’s Kryptonian-possessed underlings, Leslie Larr. Lois is caught between her journalistic integrity and the public good. Jordan and Jon make some headway with their respective crushes. John Henry Irons struggles to find a purpose in his new world. The Cushings wonder if they’ll ever be accepted in their home town again.

Beginning “Fail Safe” with Superman and Morgan Edge is a smart move. It assures the audience that this conflict isn’t over yet, and there’s plenty of reason to remain invested as the last few episodes of season 1 air. On the surface, they’re talking about Leslie Larr’s whereabouts, but that’s essentially a red herring. The real purpose of their conversation is to highlight the vast differences and uncomfortable similarities between hero and villain. Superman has always wielded immense power, but he’s just gotten a taste of how it feels to use it freely, without concern for innocent life or mass destruction. But how much of that was Edge’s – and, really, Zod’s – influence, and how much has always been a part of him? Clark Kent’s morality came primarily from his parents and partly from his tutelage under Jor-El’s artificial intelligence; in other words, he is the argument for nurture over nature. Edge, on the other hand, embraces his power and imposes no limits on it, and he argues that, were Clark not raised by the Kents or taught by Jor-El, he’d be just like Edge. The question that informs the rest of “Fail Safe” is, what happens when nature wins out over the nurturing of good people?

Is Superman solely a product of his environment, or is his goodness something he was born with, decreeing that he could never succumb to evil outside of an x-factor like mind control or possession? “Fail Safe” argues that, while it may be the long-accepted former, that’s not necessarily a good thing. If base desires like power and destruction are a part of Superman’s DNA, what’s to stop him from one day embracing them? Others believe in Superman – Sam Lane even takes the step of discarding his Kryptonite weapons as a show of faith and an apology for doubting Clark. And while Clark is touched by this, Edge’s words gnaw at his brain, making him doubt himself while the world cheers for him, and he insists Sam keep the weapons in case he ever does turn. Sam is confused, and Lois is beyond angry, but Clark knows that Edge is right, or at least believes he is; when he was under Zod’s control, he liked having his moral restraints lifted, to be able to use his power in any way he saw fit, and he cannot let that primal desire go unchecked.

What makes this even more fascinating are the flashbacks spread throughout “Fail Safe” that show a younger Morgan Edge learning his genocidal ideology from his father’s AI. Edge grew up under the exact opposite conditions as Clark; instead of loving parents who taught him to be a good man, Zeta-Ro taught Edge to wipe out mankind so that Krypton could return and to view the corrupted Kal-El as an enemy to be destroyed. But Edge held out for a long time, even arguing that Clark could be their ally and that he could embrace the man he was being raised to kill as a brother. Superman and Morgan Edge are of the same race and even genetically similar; in fact, their differing genes would favor an inherent goodness in Clark, not Edge. And yet Edge’s instincts were of kindness, humanity, and brotherhood, but were slow-cooked out of him by his lunatic father. Based on this, it would stand to reason that Clark’s nature is as moral as his upbringing was. Wisely, “Fail Safe” doesn’t give a definitive answer for this conundrum, preferring to let us draw our own conclusions. But I will say that, in the midst of their emotionally charged reactions, Clark, Lois, and Sam overlook that Clark is insisting that there be a way to kill him. If Superman doesn’t want those weapons to exist, they won’t exist. But he is being handed a free pass, and he resolutely refuses it. Whether it’s nature or nurture, or some combination of the two (which I think is most likely, for him and everyone), that’s the kind of guy he is, and that’s why he’s a hero. 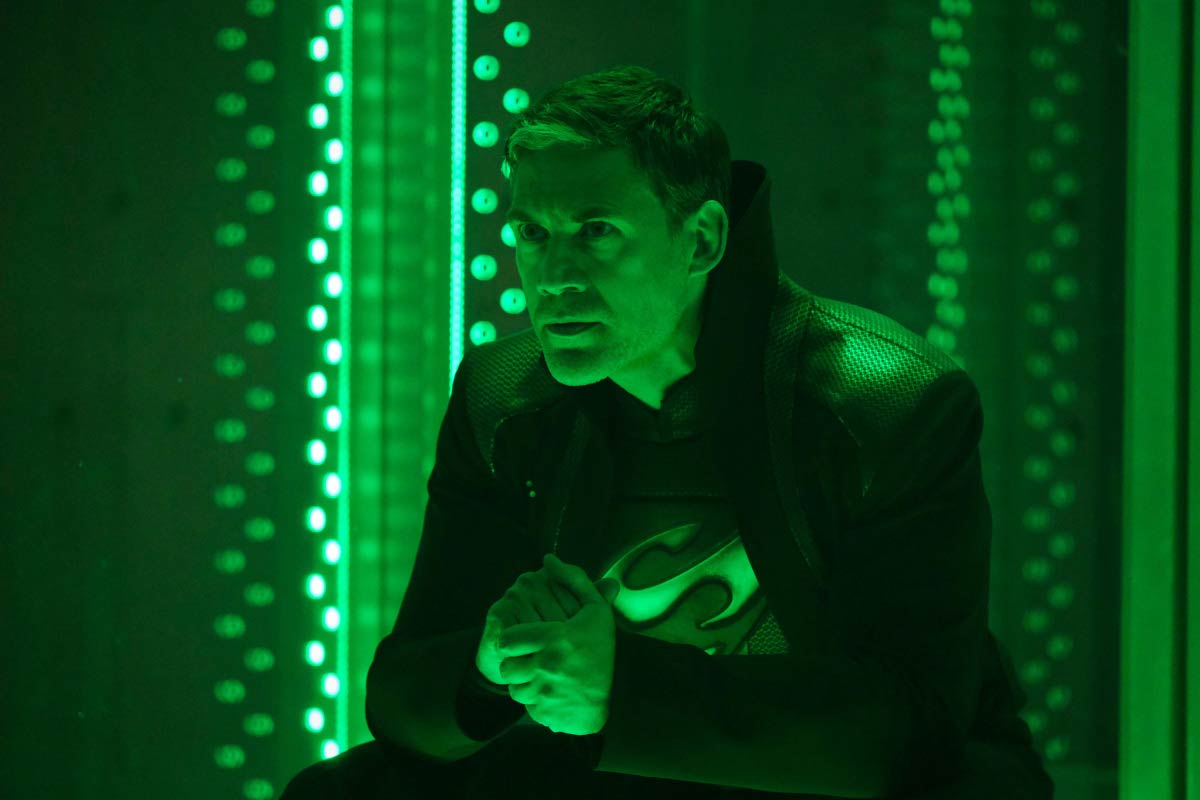 Aside from this philosophical discussion, “Fail Safe” is about how people react after a nightmare scenario. Superman’s reaction, as I’ve talked about (at great length; no, Dude, I’m not into the whole brevity thing), is to question if he’s doing enough to keep everyone safe, including from himself. Sam, on the other hand, wonders if he went too far, almost costing the world its greatest hero in his zeal to protect it. It must be difficult for a guy like him, who’s taken on as much responsibility as Superman, to admit that sometimes he has to step back and let someone more qualified take the lead; that’s what he’s learned a little bit in each episode, and now he’s ready to put his full trust in Superman. Meanwhile, Morgan Edge contemplates his failure and resolves to do it differently next time. Apparently, that near-annihilation was Edge playing nice; now, the gloves are off, and he’s doing it his father’s way. I don’t know exactly what he did in that jail cell – my guess is, he allowed himself to be possessed by his father, possibly even completely hollowed out by him – but it’s even worse news for the world than what he’s already done.

Outside of the fighters, Lois wonders what her responsibility is now. Is it to tell the truth, as she swore to do in her reporting, or is it to hold back what she knows in case it’s too dangerous for the public to hear? She ping-pongs a bit as “Fail Safe” goes along, at first sacrificing her career but ultimately realizing she’s actually sacrificing her integrity. Jonathan and Jordan are ready to be normal kids again, cutting school so they can hang out with the girls they like but facing the consequences of bucking the rules. Both of these situations are the result of enormous pressure to lie, the folly of which has been a recurring theme on Superman & Lois. Lying is always the wrong choice on this show, and it manifests in getting the boys to ditch class and Lois to turn into a neurotic mess. The latter is the one thing I didn’t care for this week; whenever the show tries to present Lois as losing control, it’s done in an overly cartoonish manner, and she comes off as a child taking a tantrum. Her indignation at Clark starts with an immature “You’re wrong and I’m right!” and ends with her rambling about knowing she’s handling this poorly (which reminds me of the very first episode of Eastbound and Down, and while I love that show, Lois Lane is not supposed to have the temperament of Kenny Powers). Even when she and Clark lecture and punish the boys, Clark speaks forcefully but rationally, while Lois just yells. I hope the writers find a better groove for Lois in the future. 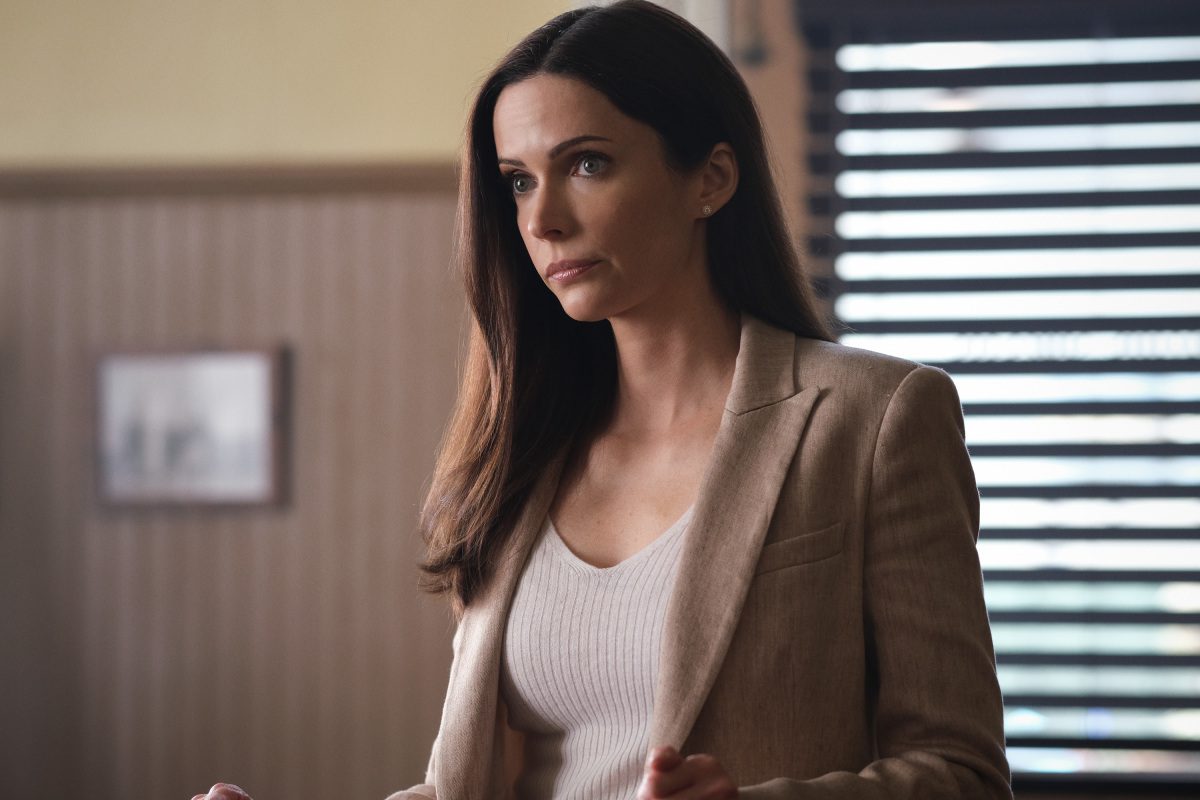 Elsewhere in “Fail Safe,” the Cushings are faced with a town that blames them for something they had no control over and seems to want them gone. Not much has changed since last week, and while Lana is determined to look on the bright side and believe that things will get back to normal, Kyle is being forced out of his job while his friends abandon him. Sarah is similarly ostracized at school, and unlike her parents, she can’t escape being a pariah. I’m not advocating for juvenile delinquency (not out loud, anyway), but can anyone blame her for taking a day off from the stares and judgments? While Jordan and Jon’s grounding is an actual punishment for them, Sarah welcomes being confined to her home. This girl is going to need some serious help, even if everything blows over soon. And it’s in the Cushing’s treatment that we see how people in general recover from a tragedy: they seek out someone to blame. Kyle and Lana are scapegoats because Edge isn’t around, and the kids only have Sarah. Even the local politician uses them as tools to gain favor with an angry citizenry. If things don’t get better fast, the good folks of Smallville may drive the Cushings out, and I wouldn’t blame them for leaving.

Finally, there’s John Henry Irons, who spends “Fail Safe” trying to keep busy as he contemplates a loss of purpose. Irons came to this world specifically to kill Superman, and not only has he failed to do so but he’s abandoned his mission, instead becoming friends with his sworn enemy. That’s doubly true once Leslie Larr is nabbed. (I love seeing him and Superman team up to get her; this is how you make a friendship satisfying.) Now, he’s trapped here with no family and nowhere to go, living off Clark and Lois’ hospitality and gratitude while he emblazons his suit with flair. It’s a lonely life for a man who’s lost everything. But, as usual, it’s Superman to the rescue. The agreement Lois and Clark reach is that the anti-Superman weapons may exist, but not with the military; they entrust the stockpile to Irons, a good man with no agenda but to help others. Like Superman, John Henry Irons is now Earth’s protector, and this is the perfect resolution not just from a character standpoint but a moral one. In much the same way that Lois concludes it’s best to put your trust in people rather than an institution that pats itself on the back for lying, giving the means of defense to us rather than the government is exactly what Superman would do. It’s a show of faith from the man determined to earn ours, just as he’s been trying to teach his boys. It’s also a very American thing to do, and that’s something I’m exceedingly happy to see: Superman exemplifying the American Way. 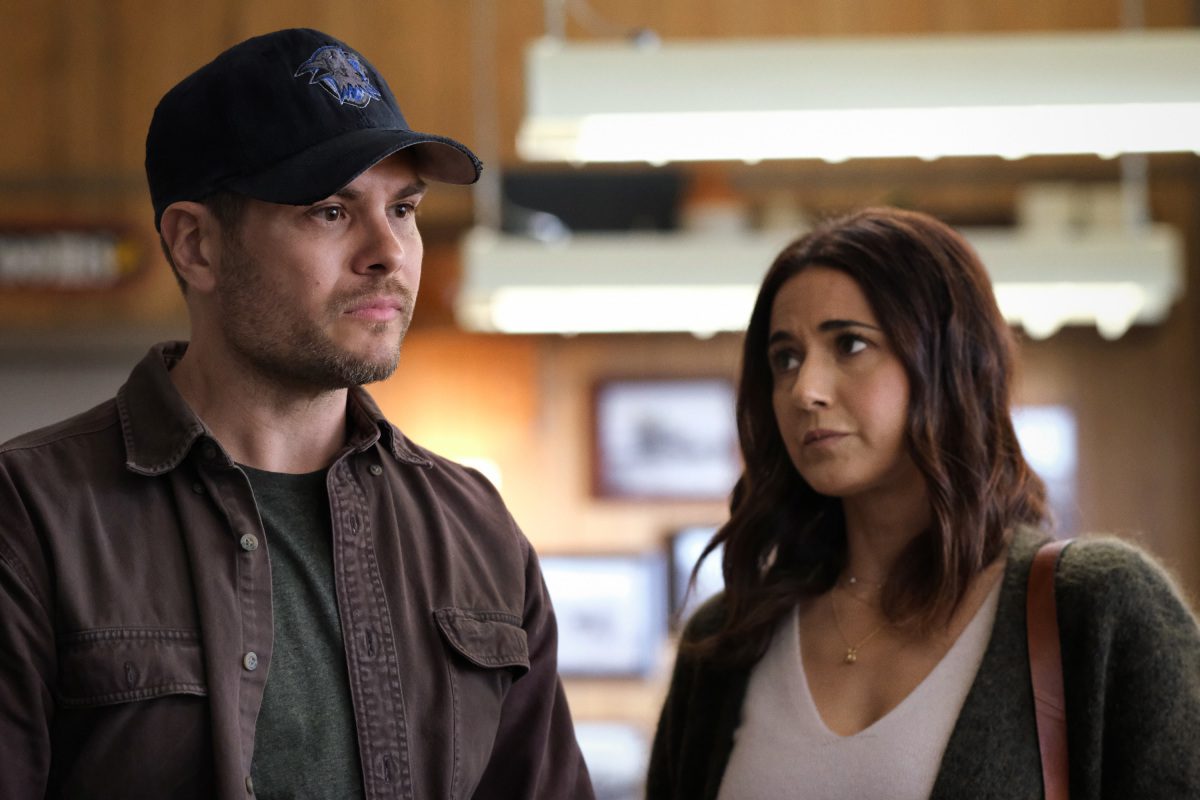 “Fail Safe” is a quieter episode that focuses on the characters and their responses to the big events of the last few weeks, as well as examines where our morality comes from. Aside from a mishandling of Lois Lane, it works well, and each of these people changes a bit while remaining unmistakably themselves. This isn’t one you’ll rewatch for kicks, but it’s a good, important episode of Superman & Lois.

“Fail Safe” is a quieter episode that focuses on the characters and their responses to the big events of the last few weeks, as well as examines where our morality comes from. Aside from a mishandling of Lois Lane, it works well, and each of these people changes a bit while remaining unmistakably themselves.