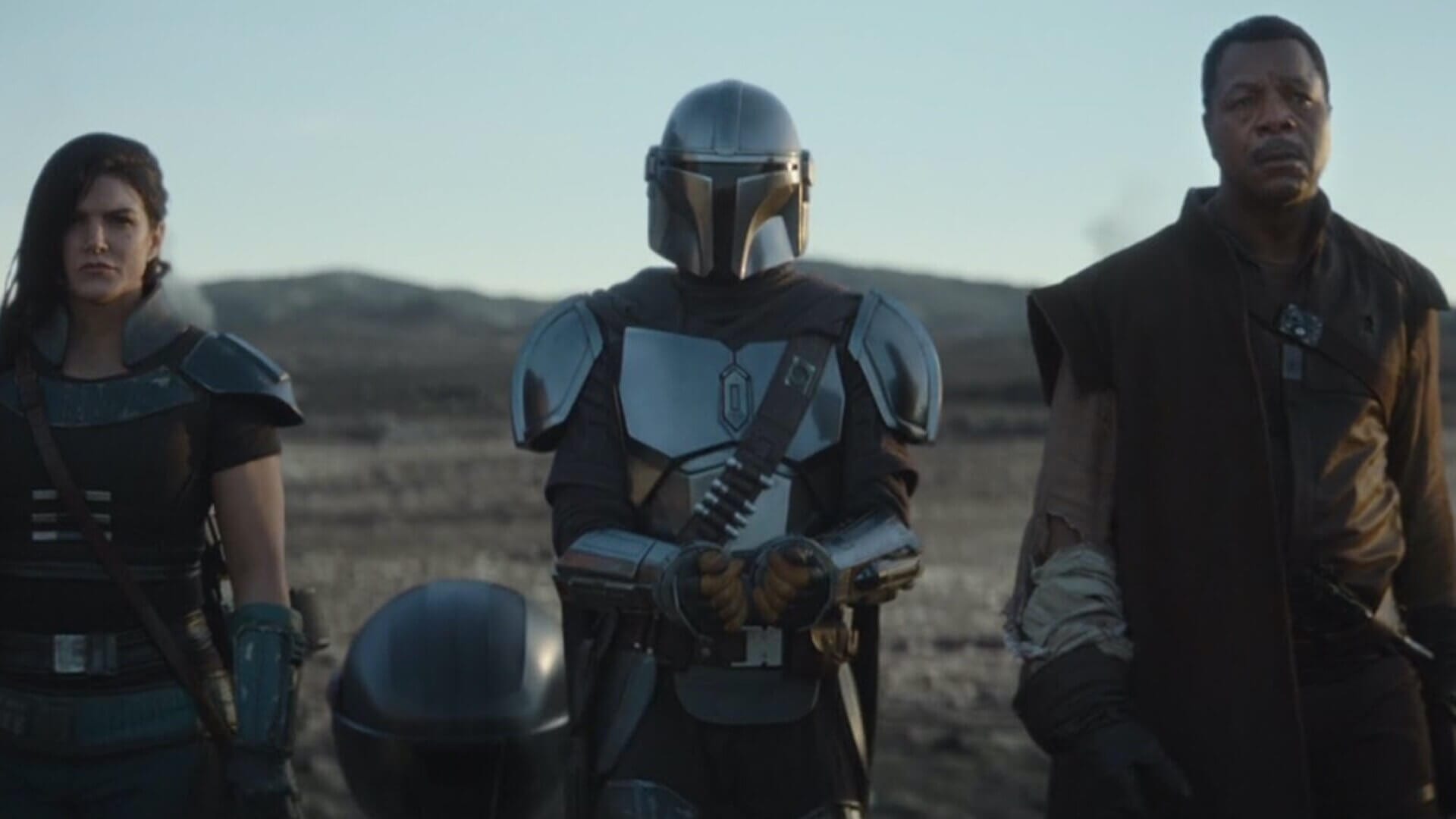 In “The Reckoning,” Mando receives a transmission from Carga regarding the client and his growing power. Carga proposes that Mando return, kill the client and keep the Child, with his name cleared. Meanwhile on Sorgen, Cara defeats an opponent in combat, and Mando enlists her aid against the client. They then head back to Kuill’s home to ask him to watch the Child. He reveals that he repaired and reprogrammed IG-11 from the first episode. Aboard the ship, the Child sees Cara and Mando arm wrestling and uses the Force against her. Mando understandably freaks out, yelling at the baby that Cara is a friend. Kuill says that he saw such things when he was enslaved by the Empire.

They meet with Carga, and he admits that he can understand Mando’s affinity for the Child. That night at a campfire, they discuss strategy when they’re set upon by flying beasts. They manage to scare them off, but not before Carga has been attacked. They don’t have enough supplies to heal him, but “Baby Yoda” does so with the Force. The next day, Carga kills his posse and tells Cara and Mando that this was intended to be a trap for Mando and the baby, but that they can face the client together. Once there, the client discusses the fall of Mandalore as being their fault for not bowing to the Empire. Before the negotiations can even really begin, Stormtroopers kill the client and trap Mando and Cara. Kuill is killed, and the baby is taken.

Virginia: I feel like I’ve been saying this a lot with The Mandalorian, but wow, what a great episode. “The Reckoning” may be my favorite yet because it features a team-up with previously introduced allies going up against an intimidating force. I am a mess over Kuill and “Baby Yoda.” How do you feel about “The Reckoning,” Munir?

Munir: I’m very happy that this episode picked up after the disappointing previous one. I loved how previous characters returned, and we finally got a payoff after all the setup in the previous chapters. I like all the characters that appeared, and, like you, I was on the edge of my seat with that ending with Kuill dead and Baby Yoda being taken. I was also surprised that Herzog’s “The Client” was disposed of; after all, he was an intriguing character. But the appearance of Moff Gideon, portrayed by Giancarlo Esposito, is setting the stage for an explosive season finale.

V: I was also taken by surprise with that development. I had figured the client would be the series’ big bad. However, I do like Gideon’s presence and ruthlessness, and I’m curious to see where things go with him. I hope Kuill somehow survives, although it doesn’t seem likely. This is probably the most excited I’ve been for the next episode because, even though we know it will be OK, I need to see the Child safe and back with Mando. As an aside, I hope Cara and IG-11 become permanent crew members. 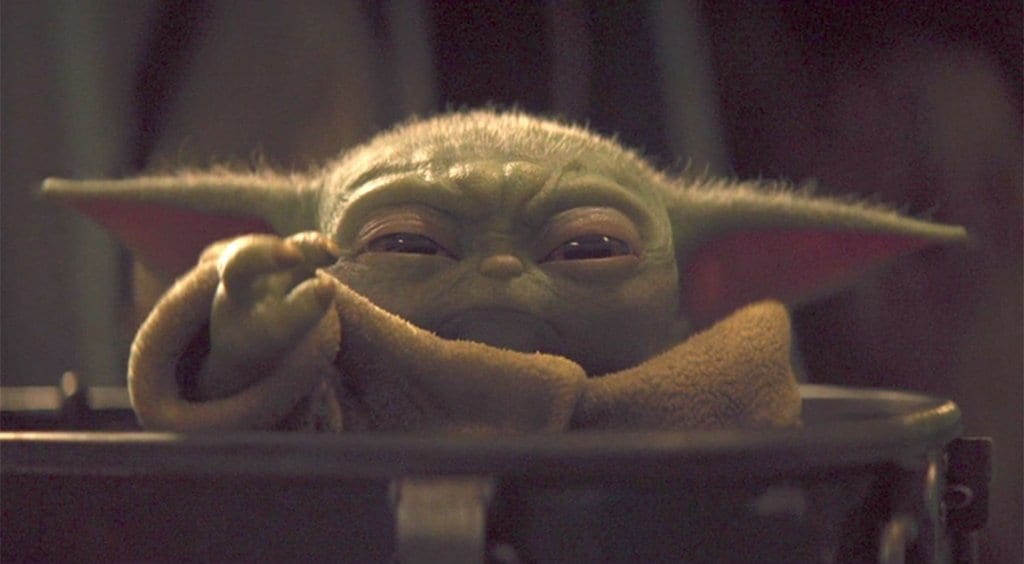 M: As much as I would like Kuill to be alive, I think he looked pretty dead. And also, I hope it’s not a fake death because it would lessen the dramatic moment. Plus, I think his death could be an additional motivator in Mando’s quest to defeat Gideon. I also want to see Cara and IG-11 as permanent crew members, and I’m intrigued to see the evolution of Mando and IG-11’s relationship, since Mando doesn’t trust droids, and especially him. I also was intrigued by The Child’s powers. We know he’s Force-sensitive, but he also cured Carga of the venom with his tears a la Rapunzel from Tangled. Does that also come from the Force, or is that a power specific to his race?

V: That was an interesting development. As the Child is so proficient at such a young age, it’ll be interesting to see how he progresses in the Force. He doesn’t always seem to grasp the consequences of using his powers, which fits well since he is just a baby.

M: Indeed. I also hope the finale answers the question as to why The Child is so crucial for the former Empire people. That’s the mystery that has surrounded this season, and I hope we get some answers about that. Also, do you think the finale would be focused only on The Child’s rescue, or maybe we would also learn more about Mando’s past? Perhaps a little bit of both?

V: I imagine the season finale will focus on the Child’s rescue. I would like to learn more about the Mandalorian and his beliefs, but this show is very tightly written and plot-driven. If anything, maybe season two will reveal more about the protagonist. I think the Empire remnants may want the baby because his species is particularly Force-sensitive, but I assume this will be confirmed in the finale.

M: Whatever the case, “The Reckoning” serves as a great, action-packed episode and a wonderful setup for next week’s finale. Everything in the episode worked, from performances to surprises, action, and pacing; everything was great. And, of course, Ludwig Göransson’s score excelled.

V: I’m constantly amazed by The Mandalorian’s music; it’s always getting better, despite already being pretty good in episode one. I don’t mean to jump the gun or overstate things, but between this and Black Panther, I can’t help but wonder if Göransson will be the next big composer.

M: He very well may be. What did you think of “The Reckoning”? Let us know in the comments, and don’t forget to come back for The Mandalorian’s season finale review!

The Mandalorian – "The Reckoning"

"The Reckoning" serves as a great, action-packed episode and a wonderful setup for next week’s finale.

Until somebody with a sheepskin makes it official I’m not counting Kuill out.