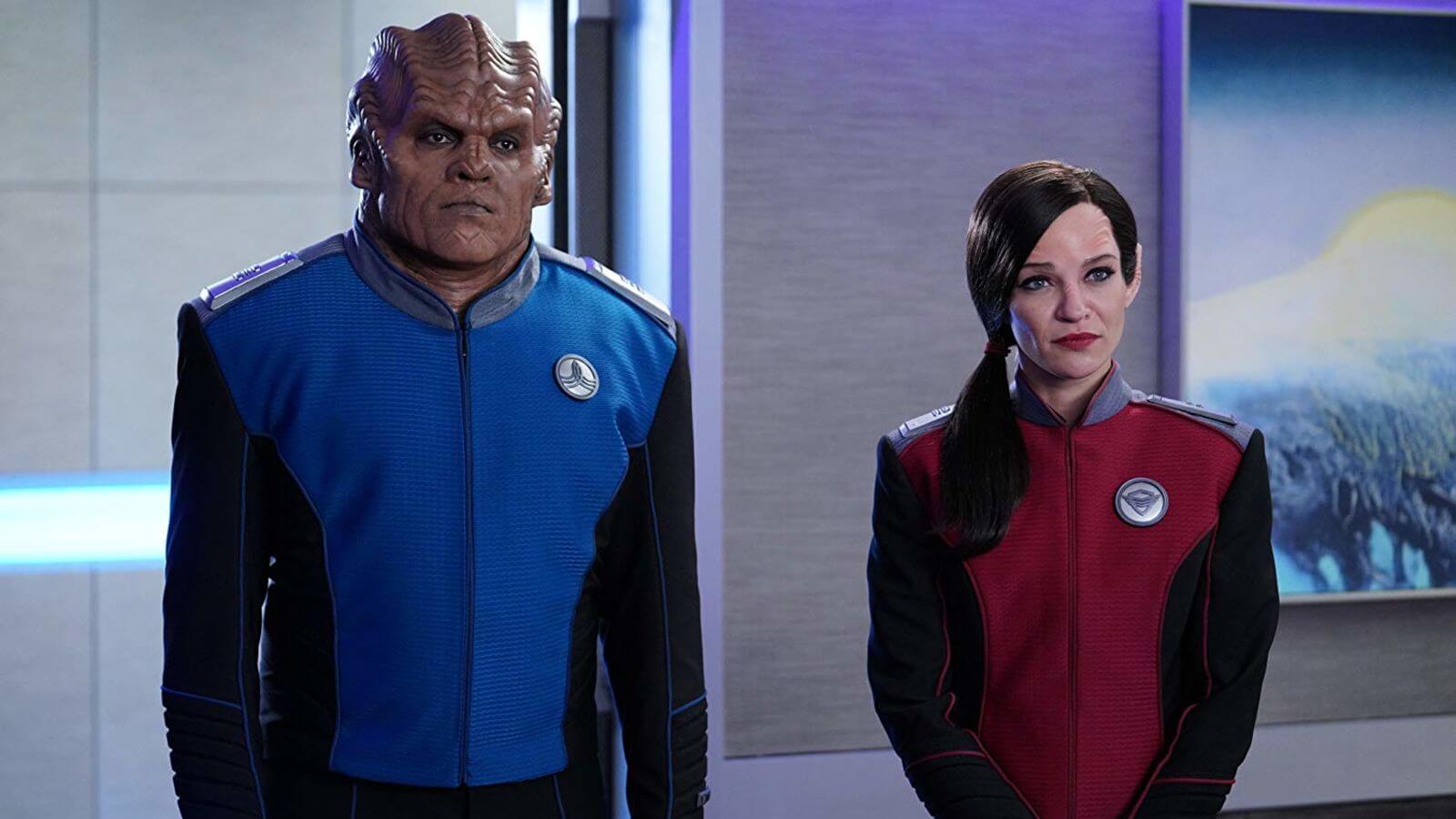 After taking a week off (during sweeps!), The Orville returns this week with “Deflectors,” which begins as another relationship episode – which, despite the excellent “A Happy Refrain,” gave me some consternation – but becomes something much more interesting. Talla takes center stage, likely in another effort to endear her to viewers reeling from Alara’s loss (although this may be a bit unfair; everyone has to get some episodes that center on them), and once again the crew of the Orville contends with the unsavory barbarism of Moclan culture.

Locar, an esteemed Moclun engineer, is on loan to the Orville to beef up their deflectors, but his presence upsets his former boyfriend, Bortus. The reason for their breakup threatens Locar’s future and, eventually, the entire crew. Kelly reaches a crossroads in her relationship with Cassius. Cookies are eaten.

The first scene of “Deflectors” seems pretty far removed from the A plot, but it actually sets the scene for the main theme of the episode. Kelly breaks up with Cassius because she discovers they want different things out of their relationship. Cassius wants something serious that eventually ends with marriage and children, while Kelly would prefer something casual that would complement her demanding job. This is a good scene, and while Kelly clearly hurts Cassius, ultimately she’s doing the right thing (and, let’s be real, Cassius will probably be better off in the long run). She touches on the idea that she is now doing what she’s always lambasted Ed for doing – namely, putting her career above her relationship; I hope The Orville explores this in the future, perhaps leading to her having more sympathy for Ed. Thematically, however, Kelly finds herself wanting something that puts her at odds with her budding romance, much like the rest of the featured characters in “Deflectors.”

Locar’s big secret is that he’s straight… sort of; I don’t think these concepts apply to Moclans, who come from (with the odd exception) an exclusively male race. But Locar is attracted to women as opposed to men, and that effectively ended his pairing with Bortus. However, Moclus being Moclus, they don’t take kindly to heterosexuality and will kill anyone they find guilty of that particular sexual deviancy. This is where previous episode “Primal Urges” pays off; in highlighting the various sexual scenarios in which Bortus engaged, The Orville comments on the hypocrisy of declaring a particular kind of consensual sex off-limits. Cultures like Moclan don’t have much self-awareness in that regard, though, and Locar has lived his true life in hiding, knowing he and his parents could be killed if he’s discovered. But he reveals himself aboard the Orville because he finds himself enamored with Talla.

It is fairly easy to see where “Deflectors” is going with these two, as their early scenes are clearly flirtatious; Talla is friendlier to Locar than she normally would be, and Locar’s looks linger a tad longer than a disinterested guest engineer’s would. Their courtship is fun and sweet, with Talla getting the stiff Locar to loosen up a little in the Environmental Simulator. It looks like we’re on course for more romcom shenanigans until things take a dark turn: Klyden has been following Locar and discovers his secret. Soon after, Locar disappears, and Talla suspects he’s been murdered, which the Environmental Simulator’s records seem to confirm. Suddenly, what was once another sugary romance becomes a spacefaring murder mystery, and things get much more interesting. 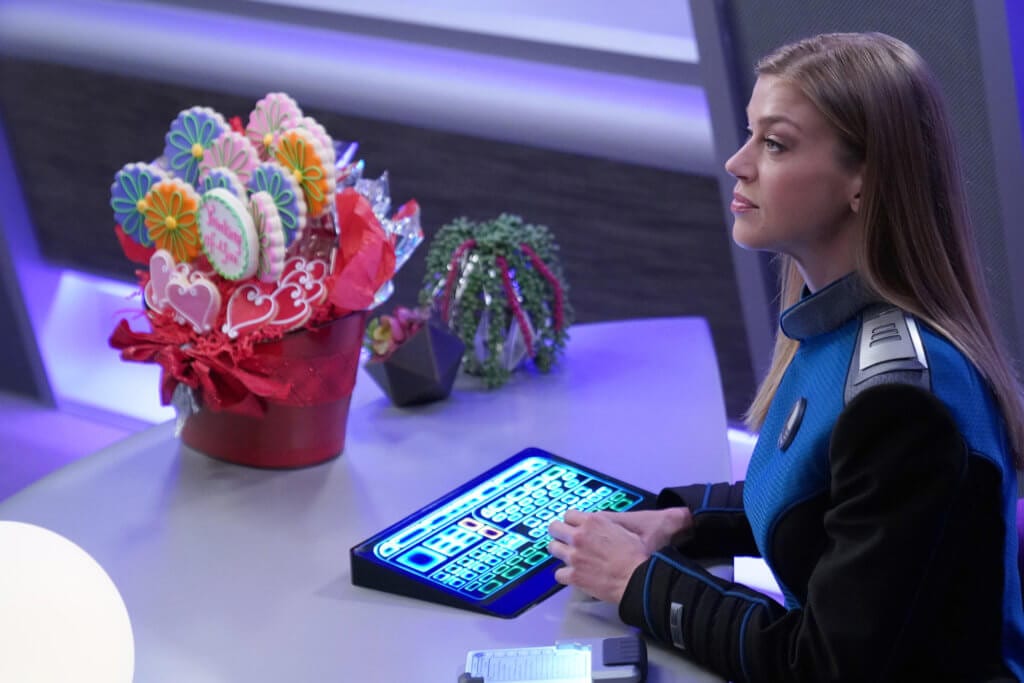 The mystery’s twist – that Locar actually faked his murder to escape his outing to the Moclan authorities – brings together the main plot and Kelly’s troubles with a discarded boyfriend who can’t let go. Locar, Talla, Kelly, and Cassius are all in positions where they’re being asked to choose between the life they want and the life others want for them. Kelly and Talla, in particular, are asked to choose between their jobs and potential relationships. Locar asks Talla to help him cover up his disappearance so that he might escape the brutal “justice” of his home planet. In doing so, however, Talla would be condemning Klyden to prison, and while what Klyden was planning to do to Locar is despicable, he’s innocent of murder. She offers to help Locar claim sanctuary aboard the Orville, but he isn’t interested, preferring to die rather than live another moment in hiding (which is a little strange when you think about it; what would he call faking his death?). As Kelly won’t compromise her life to be with Cassius, so Talla won’t compromise hers to be with Locar, and Locar won’t compromise his principles to be with Talla – or, you know, live. The one person who does compromise is Cassius, who takes a better job on another ship, choosing his career over his desire to be with Kelly, but it’s a decision that is effectively made for him. There are no happy endings for anyone in “Deflectors.”

“Deflectors” once more brings Moclan culture to the fore as the symbol for all things archaic and hateful. Inverting heterosexuality and homosexuality in terms of norms is a good way of commenting on bigotry and ignorance without being too obvious or grating; it makes sense that the Moclans would frown upon heterosexuality, given their views on women. And Klyden is painted in perhaps the harshest light he has yet. He’s so hateful that he’s willing to serve up Locar for execution without a second thought. It isn’t just a base reaction either; he’s methodical in his plotting, feigning friendliness with Locar to better spring his trap. By contrast, Bortus has known Locar’s secret for a long time and has kept it to protect him. Talla doesn’t think Bortus went far enough, but given his culture, he actually showed tremendous courage. This is important, and keeps “Deflectors” from becoming too preachy; Talla is unfair to Bortus in expecting him to take on his whole society, and even uses Topa’s forced sex change against him, which is disgusting considering how much it hurt Bortus. I’m glad she apologizes, instead of being portrayed as right in her insults. And now, after finally getting to a point where their marriage was healing, Bortus and Klyden are once again on the rocks. Where they end up at this point is up in the air, but staying together is not going to be easy for these two.

It isn’t all doom and gloom, though. “Deflectors” doesn’t have a lot of comedy, but what’s there is very funny. Ed gets the most laughs, despite not having a big role; his reaction to Kelly and Cassius’ breakup is hilarious, and his admonishment of the Moclans for using torpedoes is a classic Seth MacFarlane gag. The officer delivering cupcakes elicits a great response from Locar (he’s a nice guy and a tortured soul, but he’s still a Moclan; there’s a “we’re all brothers under the skin” point to be found there). Gordon guessing at violent Moclan traditions is also good for a laugh. And, despite their tragic results, the Environmental Simulator interludes are great, with first Kelly and Cassius and then Talla and Locar traveling to Earth in 1945, just after World War II ends. It might seem like a backhanded compliment to say the most visually interesting scenes in a sci-fi show are the ones that look like the real world, but it’s true, and they recreate the era expertly. 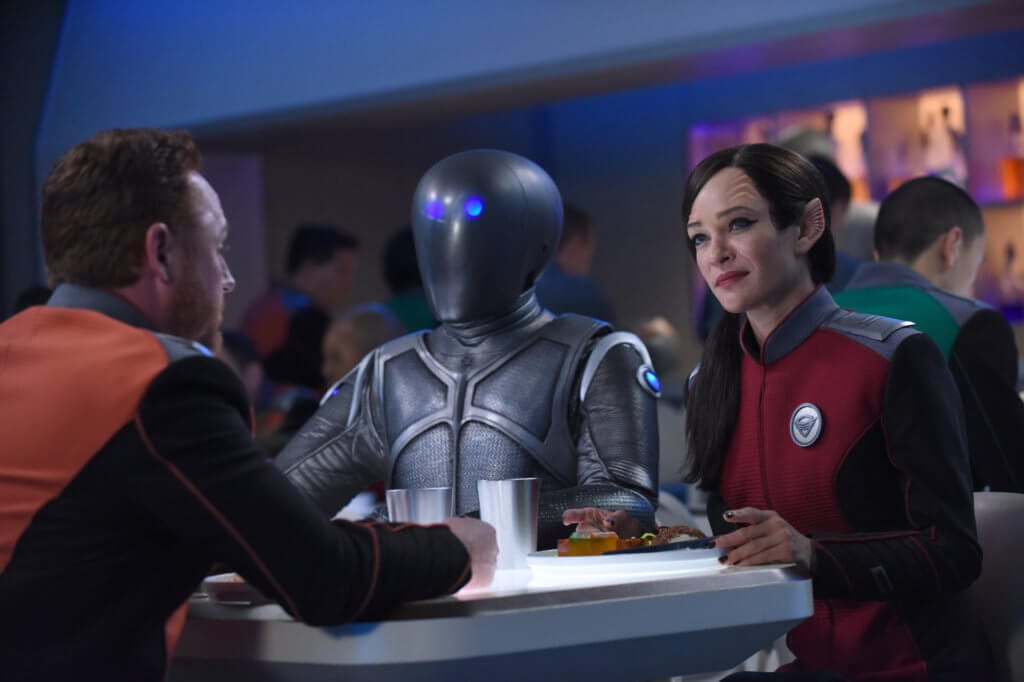 The weakest point of “Deflectors” is Talla. She’s fine, and Jessica Szohr is fine, but it’s hard not to wish this episode were about Alara instead. It would’ve had more resonance, with Alara’s persistent relationship difficulties; she finally finds a guy she likes and who likes her, and she has to send him to his death. The confrontation with Klyden at the end (which is still great) would’ve meant more too because Alara would have known Bortus longer; likewise, her invoking Topa would have held more weight, particularly because she tried to help Bortus stop the sex change. Moreover, she would have been more believable as someone falling for a new guy; Halston Sage was better able to mesh her femininity with her toughness than Jessica Szohr seems to be. If Talla weren’t another Xylean, this wouldn’t be as much of a problem, but being the same race as Alara is a constant reminder of what could have been.  Even some of the little moments create a stark contrast; when Gordon and John tell Talla about all the wacky things that have happened on the ship, her reaction is a non-reaction, as opposed to the funny shock you can picture Sage delivering under similar circumstances. “Deflectors” is a very good episode, but Alara’s absence hampers it, and I doubt this will be the last one that is less for it.

“Deflectors” is a thoughtful, sad episode that uses relationships as the catalyst for a much more interesting story. There’s more Moclan cultural troubles, more Ed and Kelly movement, and a mystery to solve. The Orville continues to use science fiction to explore higher ideas, and I’m glad we’ve got it on TV.

“Deflectors” is a thoughtful, sad episode that uses relationships as the catalyst for a much more interesting story. There’s more Moclan cultural troubles, more Ed and Kelly movement, and a mystery to solve.