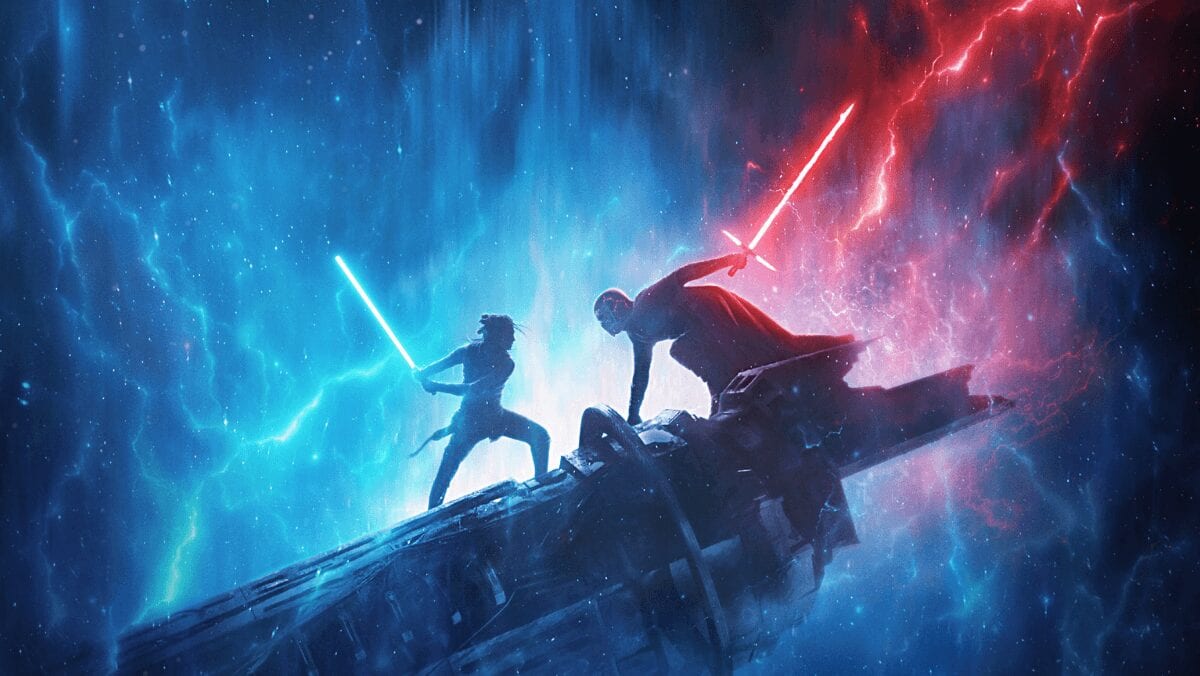 Well, Star Wars: The Rise of Skywalker is out today, and that means that, one way or another, there will be controversy. Personally, like so many people, I grew up loving Star Wars. Along with James Bond, Indiana Jones, and various other film series, I was introduced to Star Wars by my dad. I had boxes full of the action figures and saw the prequels in theaters. I didn’t think the prequels were great movies, but they had some interesting ideas and a few good performances. When Disney purchased Lucasfilm and announced a new trilogy, I was thrilled. It’s no secret that, regardless of their business practices, Disney is great at making family entertainment, and I tend to love their movies. The marketing for The Force Awakens had me even more convinced that Star Wars could be great again if the focus was taken off of digital edits and unnecessary prequels. On opening night in 2015, I wasn’t in love with The Force Awakens, but I thought it was pretty good. Over the following few days, it dawned on me that the characters weren’t very interesting and the film itself is thoroughly unoriginal. I then believed that 2017’s The Last Jedi would be better, and suffice it to say, it merely cemented my distaste for this trilogy. I also haven’t liked the spun-off Star Wars Stories, although the TV output (aside from Resistance) has been excellent. All this being said, let’s have a look at The Rise of Skywalker.

This movie’s entire plot is one big, convoluted spoiler, and the film is surprisingly top-heavy in the exposition department. Essentially, Finn and Poe are fighting the good fight in the Millennium Falcon with C-3P0 and Chewbacca. While they’re out sticking it to the First Order, Rey is hiding out at a Resistance base and training to be able to face Kylo Ren. Meanwhile, Darth Crybaby himself is seeking Emperor Palpatine, who he believes is still alive. Finn, Poe, and crew return to base with a badly damaged Falcon and insist that Rey should be out fighting with them. They set off in search of one object that will provide a clue that will lead them to another object that will help guide them to the film’s actual plot. The first 45 minutes or so of The Rise of Skywalker is a series of cuts back and forth to random settings we can barely become acquainted with before the scene changes again. Once the film finds its primary objective and slows down a little, it becomes better in technical terms, but it remains a joyless slog thanks to the bickering of the leads we barely know. Rey and Poe especially argue a lot early in the film about the Falcon, her training, and everything in-between. The film is very concerned from the beginning with showing us how awesome Rey is. Her “friends” share no chemistry with her and are treated more like handsome sidekicks present only to support her emotionally. Finn states early on in The Rise of Skywalker (and frequently repeats) that he has something important to tell Rey. This leads to missed opportunities and unfunny jokes, as it is strongly implied that the secret is Finn’s obvious love for Rey. However, this goes totally unresolved, as it did in The Force Awakens. That film was presumably setting this romance up for this film to pay off, but like most set-ups from this film or the previous two, they simply drop it and move on. The central conflict and the character inciting it are so ridiculous I literally could not believe what I was seeing and hearing in the cinema.

There has been a debate about The Rise of Skywalker retconning The Last Jedi out of existence, and it certainly tries its best. As I stated above, I’m no fan of The Last Jedi. I hated the film’s new characters, the arcs it introduced for existing fan-favorites, and the way it spat on the story and characters of The Force Awakens. Even The Force Awakens wasn’t my cup of tea, but it was concerning that the second film in the trilogy seemingly had no care for tonal, character, or narrative consistency with its predecessor. That being said, even The Last Jedi is a better film than The Rise of Skywalker. I hated The Last Jedi, but I can admit that it was beautifully shot, well-acted, and intentional in its themes and creative choices. Frankly, I don’t feel like The Rise of Skywalker earns any such concessions. Nonexistent character relationships and developments are played up to be big and emotionally resonant, despite having no build-up either in this film or the preceding two. The Rise of Skywalker also goes out of its way to retcon every major reveal from The Last Jedi. I won’t spoil which ones, although it’s likely you either guessed or heard about it from leaks. Regardless of how you feel about Episode VIII, changing every piece of information it imparted is lazy. It’s also cowardly and further prevents any sense of narrative cohesion within this film or the trilogy as a whole. 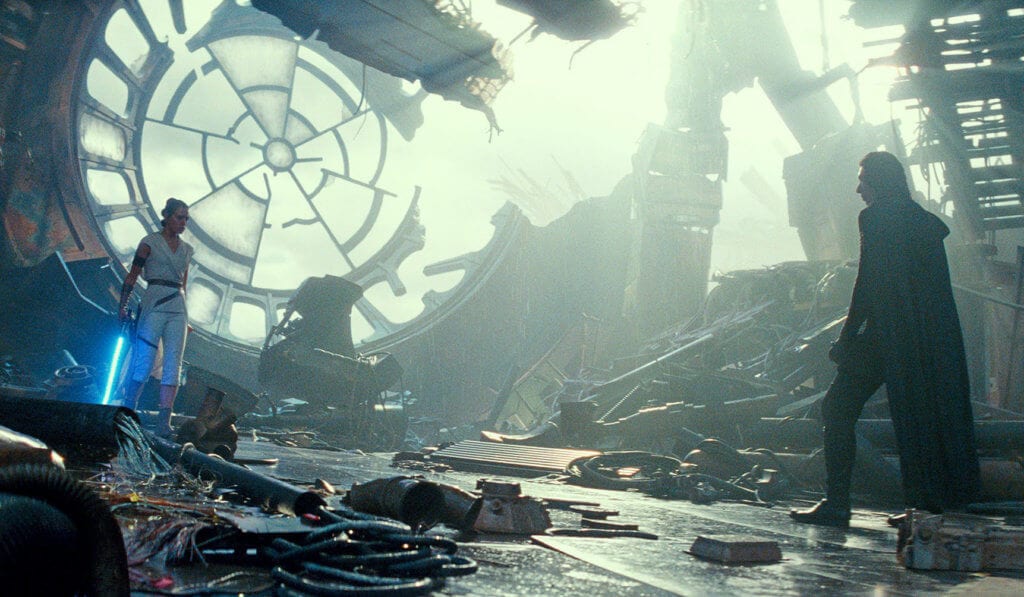 The way this film handles Leia is exceptionally heavy-handed, forced, and cringe-worthy. I understand that, with Carrie Fisher’s passing, they had limited resources and narrative opportunities with Leia. However, I can’t help feeling that re-using old footage, emphasizing a relationship with the new characters she barely knows, and tying up her story in a predictable, stupid way wasn’t the tribute she deserved. The way they end Kylo Ren’s storyline actually surprised me, but not in a good way. Strangely. I think Adam Driver is the MVP of The Rise of Skywalker, in that he’s convincing no matter the ridiculous situation into which he’s plunged. It’s a shame he has so little to do and his arc is so rushed, because the limited screen time he does get shows the most potential. However, don’t get me wrong here; his character goes through a lot of cheesy, unwarranted scenes too. Rey is the same flawless, smart, talented magical girl she has always been. Even revealed information that could pose a huge emotional or physical challenge doesn’t, as the film and the character whiz right on through. Really, I have hated each movie in this trilogy for wildly different reasons, but I think The Rise of Skywalker really takes the cake here. This film emphasizes the lack of a narrative, thematic, or character-driven through-line across the trilogy as a whole. Ever since I saw The Force Awakens, I’ve wondered why this trilogy was made (aside from money). What does the First Order stand for? Why does the Resistance even oppose them? Instead, the series seeks the same answers twice, many times to contradictory results. 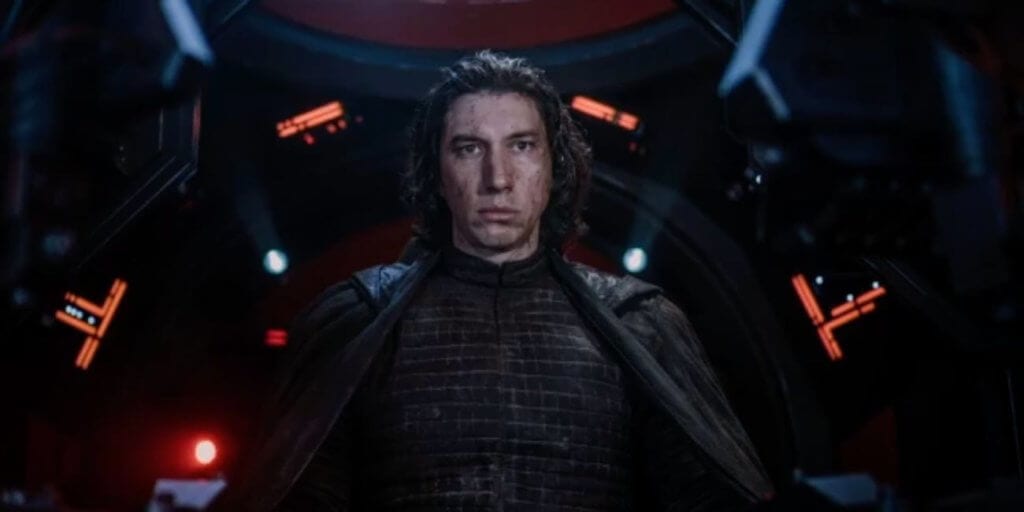 Overall, The Rise of Skywalker is worse than I possibly could have imagined. The plot is random and meandering, the characters are just as flat as they’ve always been, but without the initial likable veneer, and the film lacks any thematic consistency with its predecessors. I’m not disappointed, as I didn’t expect to enjoy this film, and honestly, it’s been years since I’ve laughed this often and heartily in the theater. The kicker is, I was laughing not at Finn and Poe’s witless bantering but at plot revelations and unnatural character interactions. I don’t regret seeing this film because I’m too incredulous at its contents even to be mad. For more specific examples and an in-depth discussion, keep an eye out for our Rise of Skywalker spoiler discussion!

Star Wars: The Rise of Skywalker

Overall, The Rise of Skywalker is worse than I possibly could have imagined. The plot is random and meandering, the characters are just as flat but without the initial likable veneer, and the film lacks any thematic consistency with its predecessors.