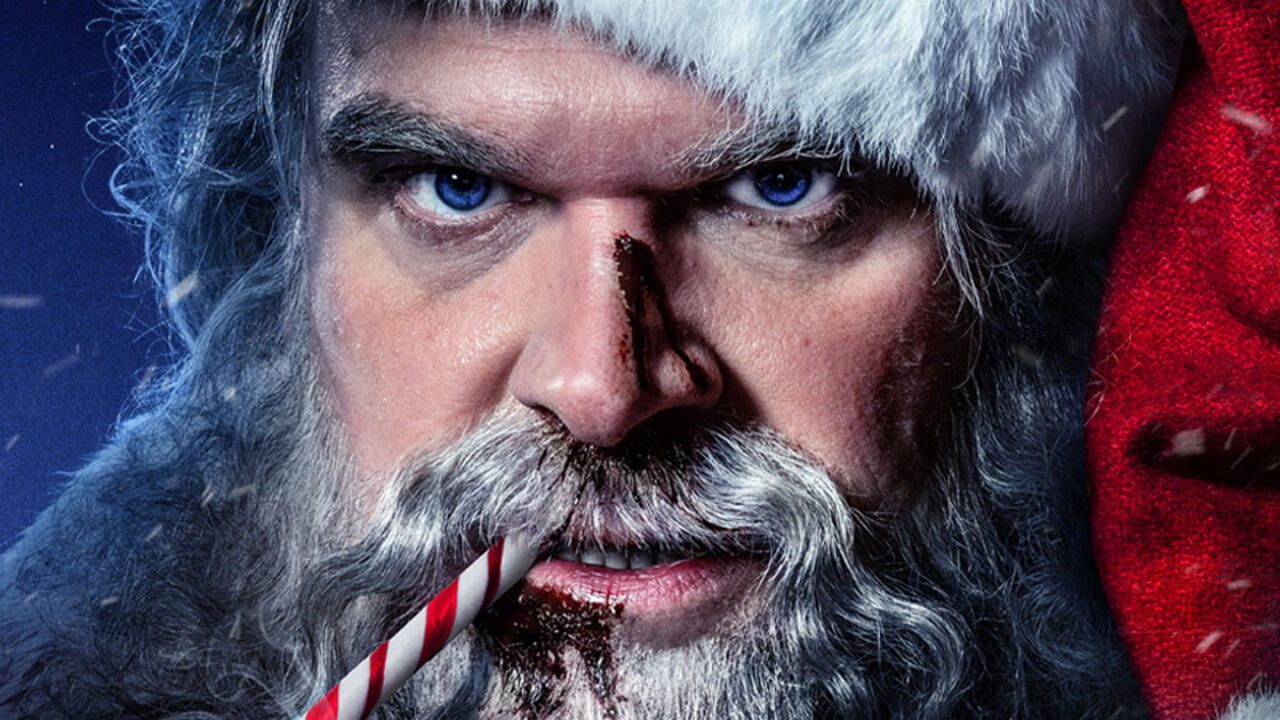 I can’t remember the last time I loved a movie as much as I loved Violent Night. It hit every single button of mine, moved me, excited me, made me laugh, and gave me something genuinely surprising. I loved Top Gun: Maverick (which I finally saw a few months ago, before Tuggs shot me dead), but I didn’t walk out of the theater as happy as I just did. Those are my emotions, though; I’ll be technical and critical below, as fair as I can be to this and the art form, but even still, Violent Night is something special.

On Christmas Eve, the sinfully wealthy Lightstone family gathers in their vast estate in the woods of Connecticut to celebrate the Season. But when a team of mercenaries seize the mansion and its grounds and take the family hostage, their only hope lies with the one guest the bad guys didn’t account for: Santa Claus, who’s there to deliver presents. But Santa’s become disillusioned, doubting himself and the Christmas Spirit; can he pull it together in time to save the day?

If you’ve looked at a lot of the stuff I’ve written on the subject (more to come this year), you know I’m not one of those sticks in the mud who think only It’s a Wonderful Life and reenactments of the Nativity count as Christmas movies. But even the stingiest stickler would have to admit that Violent Night is bursting with the Christmas Spirit, no matter how soaked it is in blood and guts. The themes are classic Christmas fare: family, redemption, faith in what you can’t see, doing for others while giving of yourself, and rediscovering the meaning of Christmas. The heart of the story is the growing relationship between Santa Claus and Trudy, the youngest member of the Lightstone family and the only one who still believes in Santa; the typical Santa/child dynamic becomes something more, two people caught in a nightmare who give each other the strength to endure.

It’s more than the themes and character interactions, though; it’s the small things. Violent Night knows it’s a Christmas movie, and not in an obnoxious, meta, wink-at-the-camera way. It references other Christmas classics; I won’t say which ones, but you can probably make a few educated guesses. And every reference works, coming about organically and facilitating the story and characters. Christmas is something real in this film, and the callbacks to the ghosts of Christmas movies past are part of the mystique surrounding it. Everyone, even the grinchiest of characters, speaks the language of the Christmas Season, while many of the makeshift weapons Santa uses to beat the naughty out of the bad guys are Christmas-related. But the best part is the score, which samples Christmas songs throughout; it’s perfect, and no matter what kind of mayhem is happening on-screen, it will make you smile. 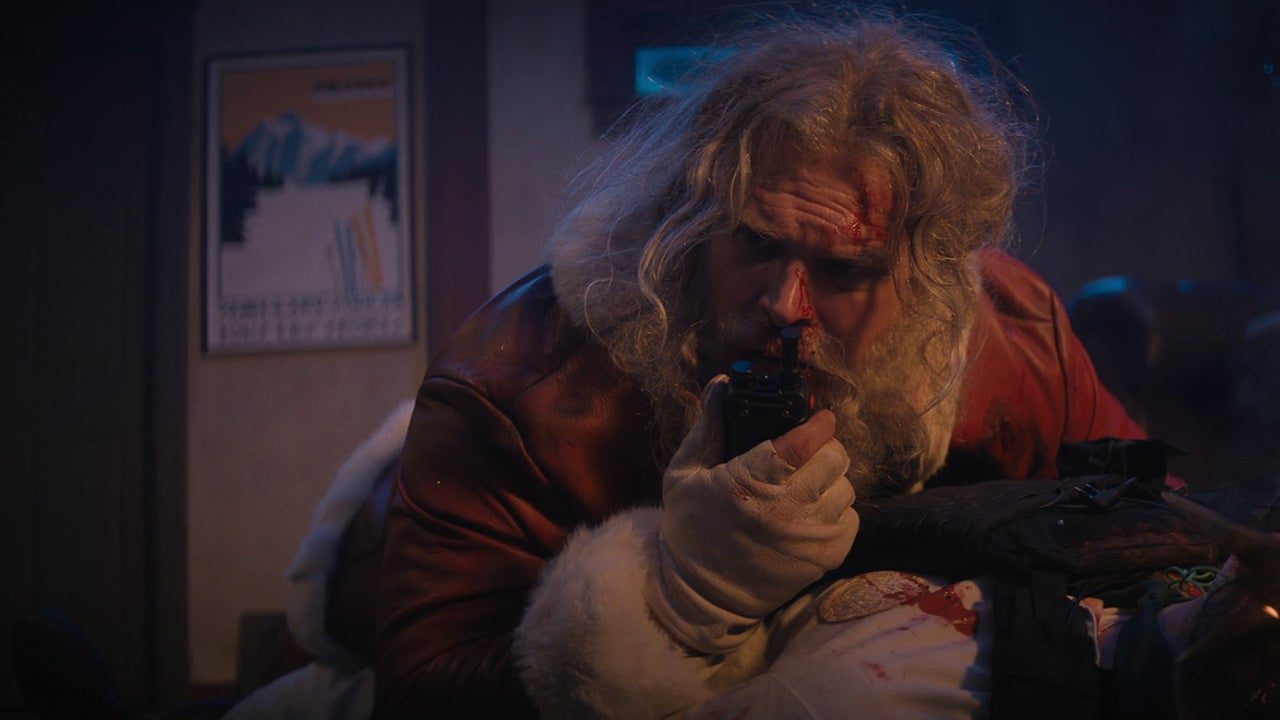 But the action is the draw, and Violent Night delivers like Santa on Christmas Eve. It’s plentiful, and it builds as the movie goes along, from standard one-on-one fights to shootouts to hunter-in-the-dark sequences and more. And it’s exquisitely filmed, with fluid action scenes that hit hard and are easy to see. One fight is done almost entirely in a single shot, the camera moving with Santa and the baddie as they punch, kick, choke, and use improvised weapons against each other. The mansion is massive, giving everyone plenty of room to spread out and stalk each other and allowing for a variety of environments for Santa and his enemies to utilize. Add Tommy Wirkola to the list of action directors who need to permanently replace the shaky-cam-reliant losers who’ve spent the better part of two decades ruining the genre.

Anchoring the film are the lead performances by David Harbour and Leah Brady. Harbour plays Santa Claus as weary and beaten-down by the growing selfishness and materialism of mankind. The true Spirit of Christmas feels like a distant memory, and if nobody cares anymore, why should he? But there’s still the spark in him, the flicker of Christmas Spirit that refuses to die, no matter how cynical he gets, and Trudy brings it out of him. Leah Brady is great because she doesn’t overcomplicate the character, nor does the script. Trudy isn’t some secret super genius who’s wise beyond her years; she’s just a sweet kid who loves her family and wants Santa to put it back together. Like Thurmon Merman before her, Trudy acts as the embodiment of the Christmas Spirit and a reminder to a broken Santa of what he’s been doing all these years. 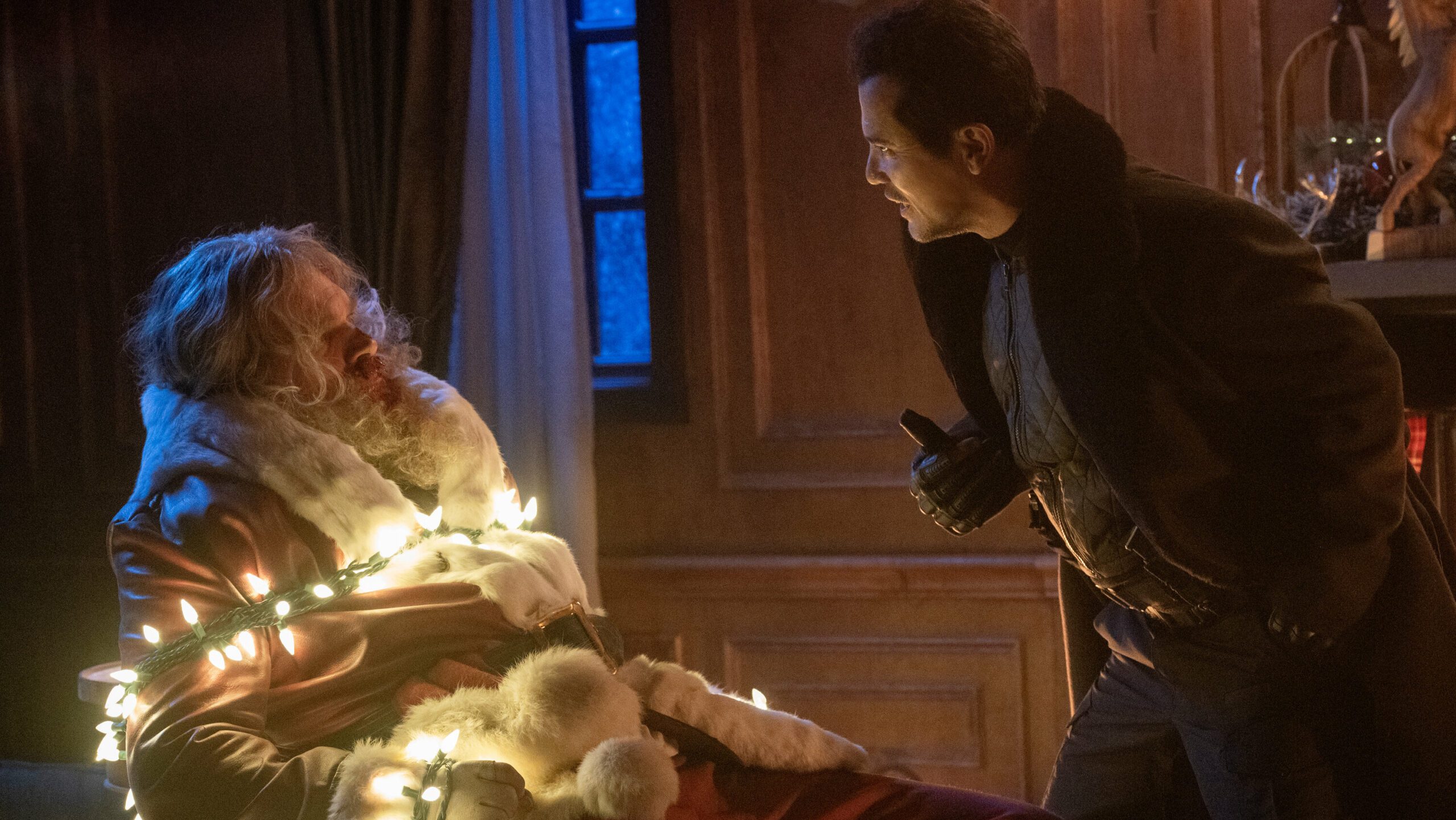 The rest of the cast is fine, though some are miscast. John Leguizamo plays the villain, and he’s perfectly decent, but I wish it were someone else. There’s no world where I think Leguizamo is a physical threat to David Harbour, who looks at least twice his size. And Leguizamo doesn’t have the presence or charisma to compensate for his compact frame. Some of his henchmen are a little too manic and silly, too; one, in particular, is played so broadly that there’s little menace in his scenes. Others fare better, especially Leguizamo’s second-in-command, a big bruiser of a bad guy who probably should have been the main antagonist. And speaking of the villains, they fall into that modern action trap of forgetting they’re holding automatic weapons when they could easily just shoot somebody. Once or twice could have been overlooked, but it happens a lot, and it gets distracting.

The Lightstones are all fairly well-cast. Beverly D’Angelo plays Gertrude, the arrogant, domineering matriarch, and she’s perfect, tossing around cutting remarks like she’s sprinkling salt on a roast. Edi Patterson is another stand-out as Gertrude’s greedy daughter Alva; if you’ve ever watched The Righteous Gemstones, you know how hilarious Patterson is, and she’s just as funny here. Cam Gigandet also gets some laughs as empty-headed wannabe action star Morgan Steel, Alva’s boyfriend who wants Gertrude to fund his movie. Alex Hassell and Alexis Louder are Jason and Linda, Trudy’s parents, and they’re serviceable, but nothing special. The roles are a bit thankless – the beta-male wet blanket and the sensible modern woman – and the actors certainly look their parts, particularly the slight Hassell. The Lightstones are the kind of people you’d rather drive off a bridge than spend an evening with, but that’s part of the story, and the payoffs are worth it. Still and all, when the focus is on them, it’s hard not to want to check back in with Santa. 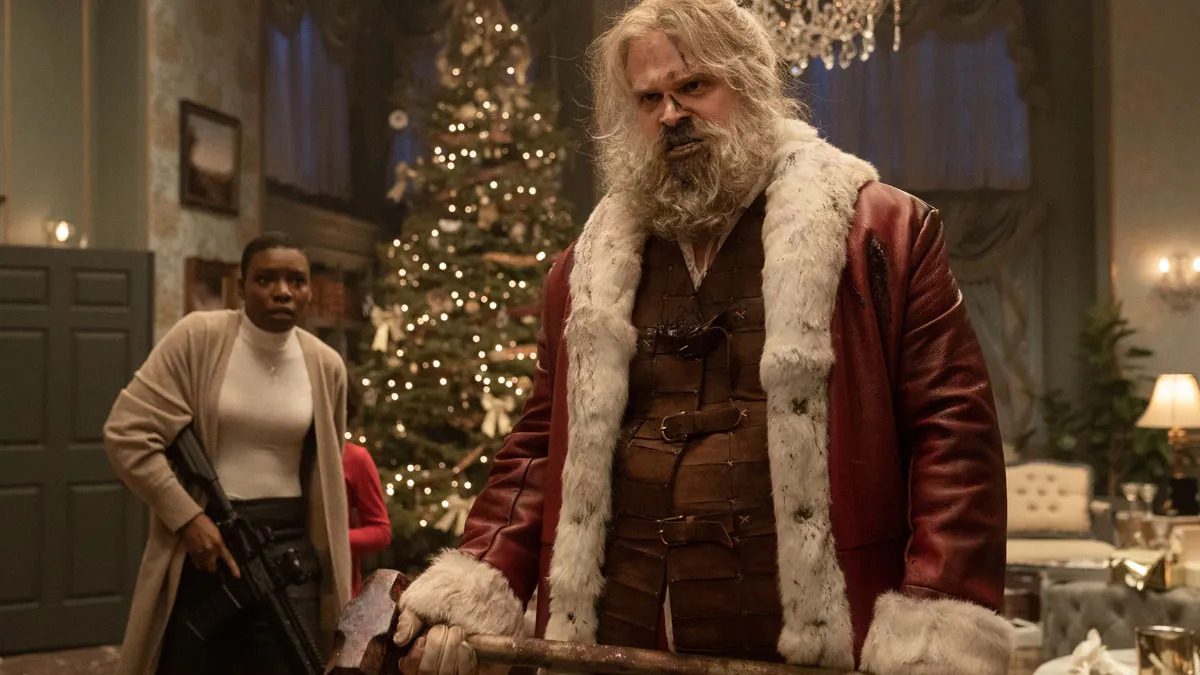 Violent Night is a movie to see in theaters. Don’t wait for streaming, VOD, or Blu-ray; make the trip to the movies for this one, and bring some buddies. I would love for this film to be a massive hit (not that I want a sequel; one is perfect), but I think it’s going to be something of a sleeper that grows in popularity over the years. But anyone who does seek it out will have a great time; a lot of laughs, some thrilling and visceral action, and a surprising amount of joy and warmth as Santa Claus kicks ass and celebrates the magic of Christmas.

Violent Night has a lot of laughs, some thrilling and visceral action, and a surprising amount of joy and warmth as Santa Claus kicks ass and celebrates the magic of Christmas.

Wow, I wasn’t interested but now after your review, I gotta go and see this!