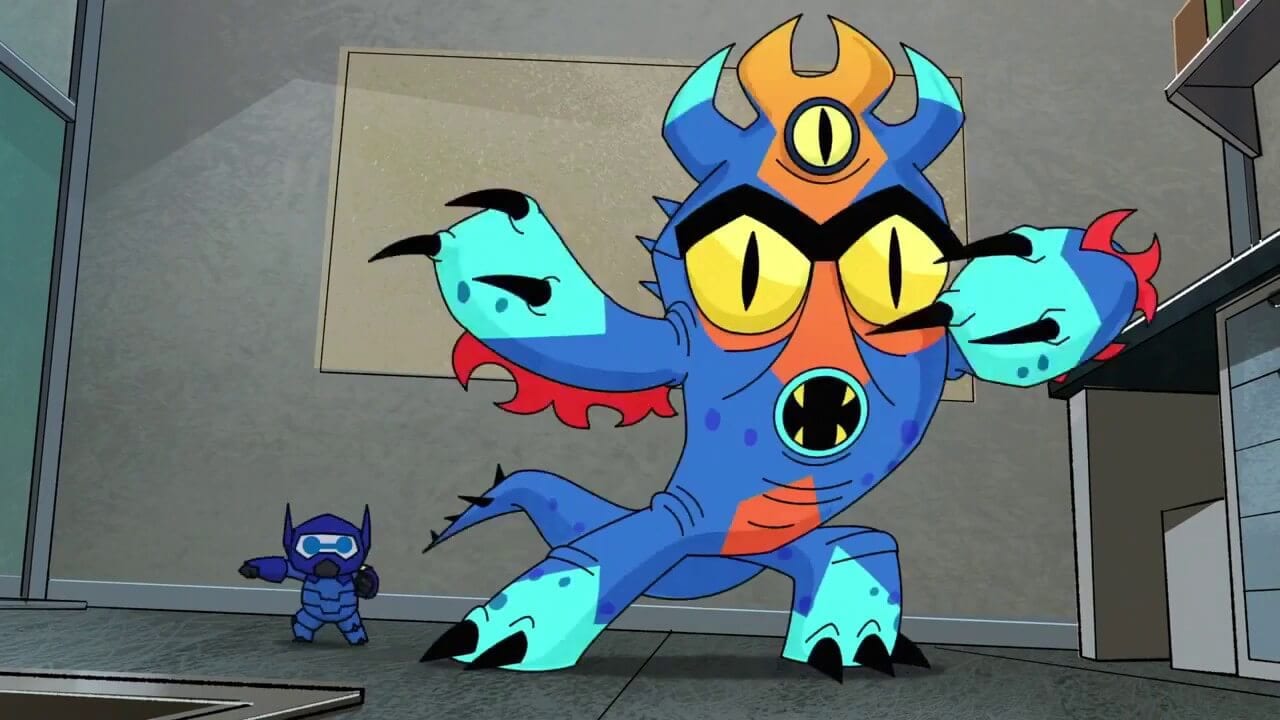 “I don’t have internal organs!”

In “Mini-Max,” Fred is left to battle Globby alone as his friends are all in class. However, Fred destroys public property and creates a huge mess in his attempts to stop Globby, who still ultimately gets away. Hiro develops a small bot to keep an eye on Fred and help him while the others are at school. Fred overhears this but, in typical Fred fashion, takes it as good news and is excited about the potential new “sidekick.”

Hiro heads to the school lab to finish programming Mini-Max, but only finds Granville and a sign stating that the lab is under maintenance until further notice. Nonetheless, he and Baymax break in and create the chip needed for Mini-Max. Baymax sees Granville sneaking around the lab and the two decide to leave. Fred instantly loves Mini-Max, but Mini-Max turns out to be a little high-strung. Hiro presents the possibility that Granville could be up to something bad, a notion that his friends merely laugh off. Still concerned, Hiro decides to follow her.

The two tail Granville to Good Luck Alley and subsequently run into Yama. They escape using a feature that allows Hiro’s bike to fly. Fred and Mini-Max face Globby and again he escapes, but Mini-Max protects the city from collateral damage. Hiro decides to visit Professor Callaghan in prison, concluding that he’ll know the truth about Granville as the two worked together. He tells Hiro that Granville resigned after a mysterious lab accident; he also thanks him for saving Abigail and apologizes for what happened to Tadashi.

Hiro finds Granville in the lab again and learns that she’s working on a security system for the lab. She tells him the real reason she originally left the school: a student of hers had the lab accident working after hours, something she had approved. However, her security system turns on her and the two are trapped and fighting for their lives. Fred and Mini-Max show up and fight the security-bots off, freeing the two and destroying the security system, which we discover was being remotely controlled by Obake.

Like several of the recent Big Hero 6 episodes, “Mini-Max” has quite a lot going on. This episode excels at balancing the ensemble cast, while still managing to introduce a new character and re-introduce Callaghan. They do slightly return to Fred’s characterization from “Fred’s Bro-tillion” with his evident fear of spiders, but I’m willing to accept one fear like this. In that episode, it felt like they were making Fred too much like Wasabi, but he was much more himself in “Mini-Max.”

I think it was a good idea to explore what happens to the city while the kids are at school, specifically that Fred, who is not a student, takes over. Fred is immature and impractical, so without the supervision of leader Hiro and high-strung Wasabi he’s prone to destruction and chaos. I like the idea of creating another robotic teammate to assist Fred and keep an eye on him, and Mini-Max is both adorable and hilarious. I hope this guy becomes a permanent team member and not just a one-episode character. His exchanges with Fred and Baymax, in particular, are episode highlights. There are also some great fight scenes in the episode, especially the end where the two save Granville and Hiro.

Another great aspect of “Mini-Max” is Professor Granville; we’ve had varying degrees of exposure to this character since the series premiere, and this is by far the most they’ve fleshed her out. Up to this point, it was uncertain whether Granville was a friend or an enemy, with Hiro following her in “Mini-Max” due to suspicion that she was up to something nefarious. It’s nice to finally know she’s a good person, but one who has made mistakes and learned from them. The scene where she tells Hiro that she feels like she failed as a teacher is a small moment, but it’s powerful. I also can’t help wondering if the mysterious student she resigned over is Obake. They don’t look much alike, but it’s been a long time, and it would help explain some of his motivation. In the flashback, they also show that the student was injured, with his whole body wrapped up. Could he have gone Bond villain and got a complete makeover to look like Obake does now? This would certainly be in keeping with Obake’s character traits of which we already know. The few shots of Obake in the episode further my suspicion that he is Granville’s past student.

I also love that “Mini-Max” uses this storyline to bring Callaghan back into the mix. I’ll be reviewing the first movie next week, so I don’t want to go into my feelings on this character too much here. However, I will say that I appreciate the attention to detail in Big Hero 6: The Series. They haven’t relied too much on the original film’s plot and conflict, but they’re not ignoring it either. The scene with Hiro visiting Callaghan is another great segment packed with emotion, character development and important plot information. I hope Callaghan becomes a recurring character, and James Cromwell is credited in an unknown number of episodes on IMDb, so that’s a possibility. I’d love to see his relationship with Hiro grow and possibly change; maybe he could even become a sort of mentor or someone the team can go to for advice. Either way, with the way they left this scene, I’m sure he’ll be back for some concrete resolution with Hiro.

While I was initially excited about the announcement that Big Hero 6 was getting a TV series, it was a cautious excitement. Admittedly, the superhero genre lends itself well to the medium; I also like the art style, and they managed to get most of the main actors back. But Disney’s spin-off TV shows tend to be terrible, and I wasn’t expecting a follow-up to the movie. In some ways, this series has deepened my appreciation of the film, and the season’s not even over yet. There have been a couple of strange character moments with Fred, but overall this has been an excellent season. I legitimately can’t wait to see what happens with Obake, Granville is becoming a favorite of mine, and I want to see more of Callaghan.

I know I keep harping on this, but I really wish the Rapunzel’s Tangled Adventure crew would take a look at the work being done on this series. A good spin-off should feel connected to the original work, like they take place in the same universe, but the stories and character development should be organic and original, not re-treading issues that have already been resolved. I consider Tangled to be the superior movie, but clearly the writers and directors on the series have no idea what to do with the characters. The stuff that happens makes no sense with what we already know about the characters, and the plot feels like they’re just playing mad libs. There isn’t a sense of care in introducing new characters or respecting the characters people already love. Big Hero 6: The Series is so smart because it knows how to take Hiro and the others in new directions while largely keeping their personalities intact and keeping the first film in mind, like it does with “Mini-Max.” This is fast becoming one of my favorite Disney TV series, and it strengthens the movie by adding background information and developing the side characters. If you like superheroes, animation or good old popcorn-style entertainment, I would recommend this series to you regardless of age or demographic.

Like several of the recent Big Hero 6 episodes, “Mini-Max” has quite a lot going on. This episode excels at balancing the ensemble cast, while still managing to introduce a new character and re-introduce Callaghan.