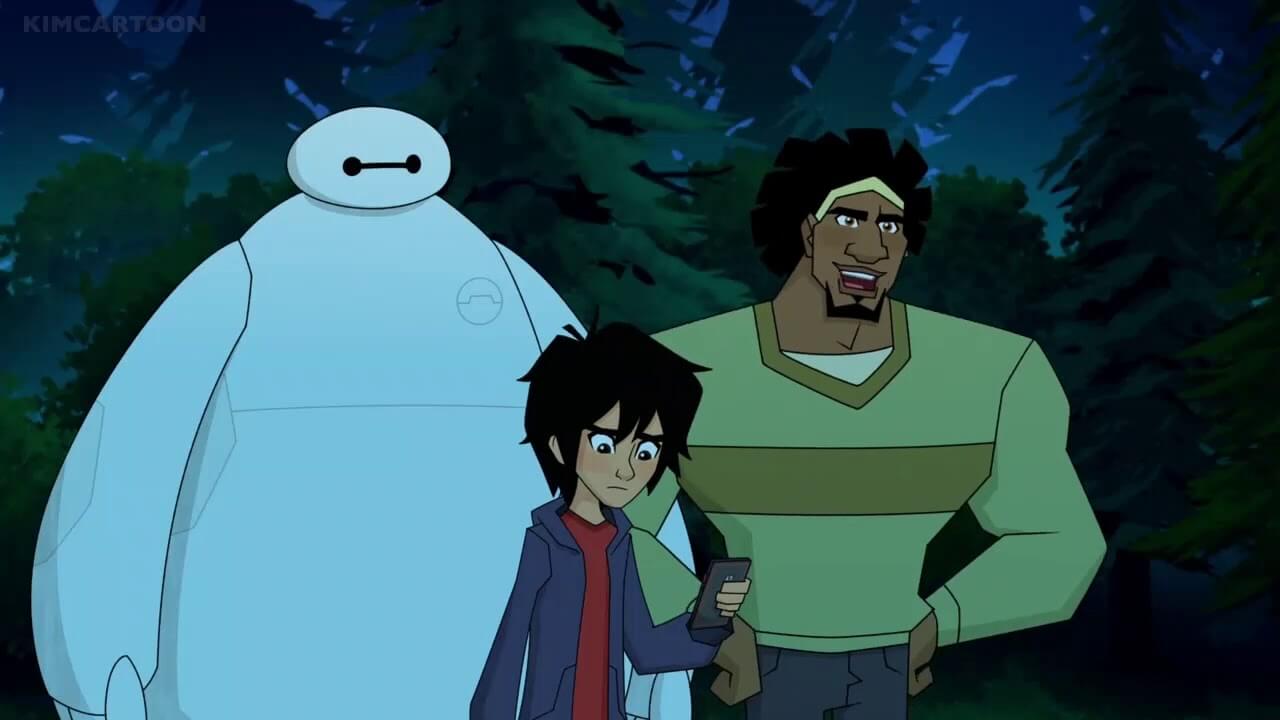 In “Mr. Sparkles Loses His Sparkle,” the team is unable to save a burning building because they took too long to suit up. Fred and Gogo watch a live game show called Maximum Insane Obstacle Challenge. Hiro develops a system that will deliver each hero’s suit to them, but it doesn’t work, and they end up in each other’s costumes. Mr. Sparkles, the host of Maximum Insane Obstacle Challenge, gets increasingly jealous as a video of Aunt Cass’ cat Mochi goes viral, beating out his uploads in watches and follows. Hiro creates another suit delivery system, and this one similarly fails. Wasabi thinks Hiro has inventor’s block, prompting him to panic.

Baymax acts as Hiro’s therapist, and Wasabi meditates with him in an attempt to help him. Mr. Sparkles kidnaps Mochi and stages a new challenge: Mochi will go free if someone beats the obstacles, but otherwise, he gets blasted into space. Baymax is sent with Aunt Cass to keep her from finding out what really happened to Mochi, Hiro goes off alone as his friends compete in the challenge to save Mochi. Wasabi, Fred, and Honey fail, but Gogo defeats the game. Nonetheless, Mr. Sparkles shoots the rocket with Mochi. Hiro sends his own rocket to intercept Mochi and bring him home. Mr. Sparkles gets away, and his new challenge goes viral, but Mochi is reunited with Cass.

In “Killer App,” master villain Obake wants to get a better knowledge of the heroes. The team has a meal at Noodle Burger, where they meet the restaurant’s new mascot, Noodle Burger Boy.  Professor Granville announces a competition between schools to find a solution to the trash collecting in space. Wasabi and Hiro each want to participate, but she pairs them as a team against their wishes. Noodle Burger Boy is used by Obake to create mischief in the city. When Fred goes back to the restaurant, they tell him the mascot is missing, causing the whole team to search for him. However, when they do find him, he attacks. The fight ends in a draw, with Noodle Burger Boy saying he needs to upgrade to defeat them, and driving away. The team discovers that he was made by Krei. 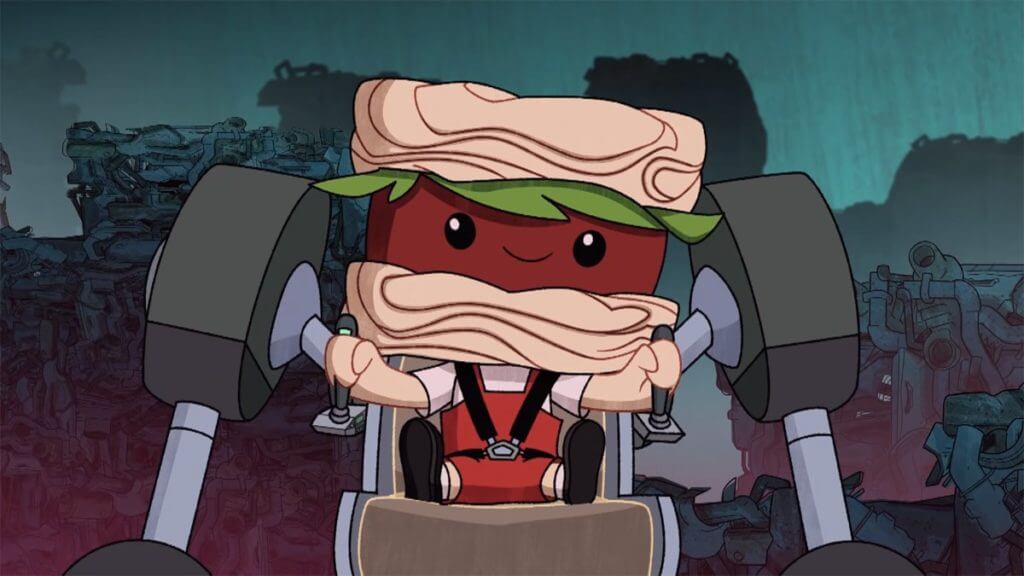 Hiro and Wasabi bump heads while working on their project for the competition, struggling to understand one another. Krei explains the construction of Noodle Burger Boy to Fred, Honey, and Gogo: his body is.made of military-grade titanium, in addition to his having the ability to predict what people want or will do. The mascot finds the project the guys have been working on and takes it over, giving him an even bigger, stronger body. He also traps Baymax, using him as bait for his human friends. Wasabi and Hiro switch suits to throw off NBB’s prediction algorithm, forcing him to fight with blunt force. They defeat him, and the guys please Granville with their project. However, NBB returns to Obake with all of the data on the team and their identities.

Big Hero 6 has been getting some dynamite guest stars, and Patton Oswalt as Mr. Sparkles is no exception. I like the bad guy of the week format of this series, and Mr. Sparkles is so crazy you just have to laugh. I like his design and outlandish personality. I thought Mochi’s slow clap trick was unlike a real cat, and also underwhelming to become a viral video. But really, it suits the madcap tone of this show, and it works in context. Overall, “Mr. Sparkles Loses His Sparkle” is a lot of campy fun. I like that they put Mochi in danger too and that the fear of him getting hurt is what helps Hiro work on his inventions again. It’s also quite humorous when the team ends up in each other’s suits.

“Killer App” is also a good bit of silly fun. I’m hoping the running theme of the team’s problems being caused by Krei’s carelessness is leading up to something. It’d be cool if they developed this character more, as I mentioned with regards to “Aunt Cass Goes Out.” I like Noodle Burger Boy, and some of his catchphrases while he’s working for Obake are pretty funny. As an aside, Obake is voiced by Andrew Scott, known for the likes of SPECTRE and Sherlock. I like what we’ve seen of this character, and I want to know more about the glowing portion of his face. Could he have some secret power? When the time comes, I really hope he’s a threatening and interesting villain because his buildup has been great. 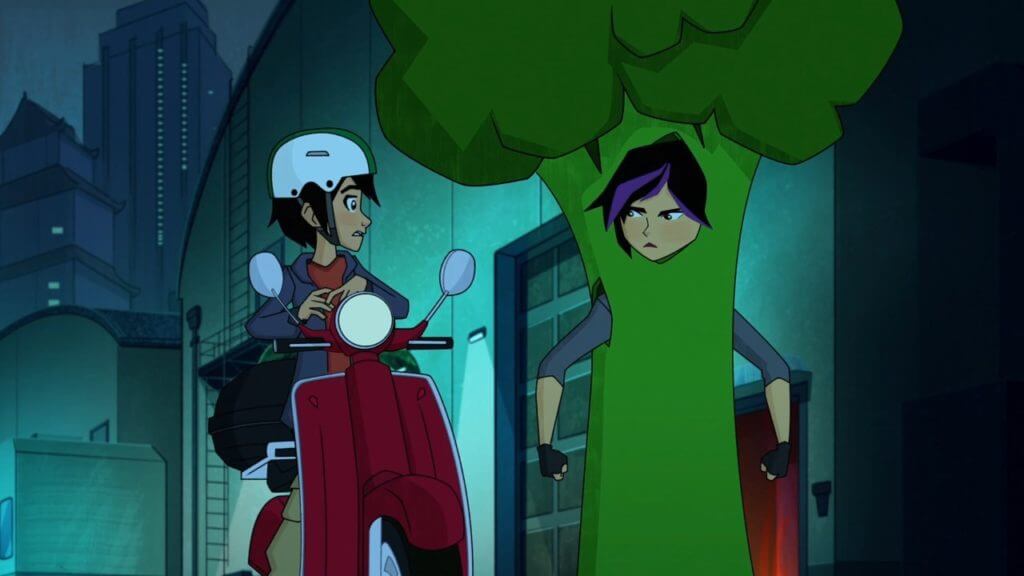 It may be unfair to compare two shows so different in tone and subject matter, but Big Hero 6 seems to have transitioned to TV better than Tangled. Despite numerous differences, both are Disney TV series based on popular recent Disney animated features. I admit that, being about a team of superheroes, BH6 lends itself to serialized television much better than the self-contained fairytale musical. That being said, it still feels like the crew on Big Hero 6 had a better vision for their show than those working on Rapunzel’s Tangled Adventure.

The focus on telling one story at a time and slowly revealing the main villain has become unpopular in modern television, with audiences and screenwriters seemingly preferring tight narratives with no filler and no one-off villains. However, episodic stories can be done well. This show does it right, and at the risk of making an odd comparison, it reminds me of the old James Bond movies; each had its own villain, set pieces, and action sequences, but many of the bad guys were operating under a master villain, another familiar aspect in Big Hero 6. Meanwhile, Rapunzel’s Tangled Adventure struggles to give the characters personal drama and development, while supplying enough villains and stories to fill out a rather large season. This comes as a genuine surprise, as I was looking forward to seeing Tangled continued more so than Big Hero 6.

Overall, I really enjoyed both “Mr. Sparkles Loses His Sparkle” and “Killer App.” This show is a very episodic comedy, normally two things I don’t care for. But they do a good job at keeping it fun and coming up with diverting villains. I look forward to seeing it all come together with Obake and his underlings.

Overall, I really enjoyed both “Mr. Sparkles Loses His Sparkle” and “Killer App.” This show is a very episodic comedy, normally two things I don't care for. But they do a good job at keeping it fun and coming up with diverting villains.