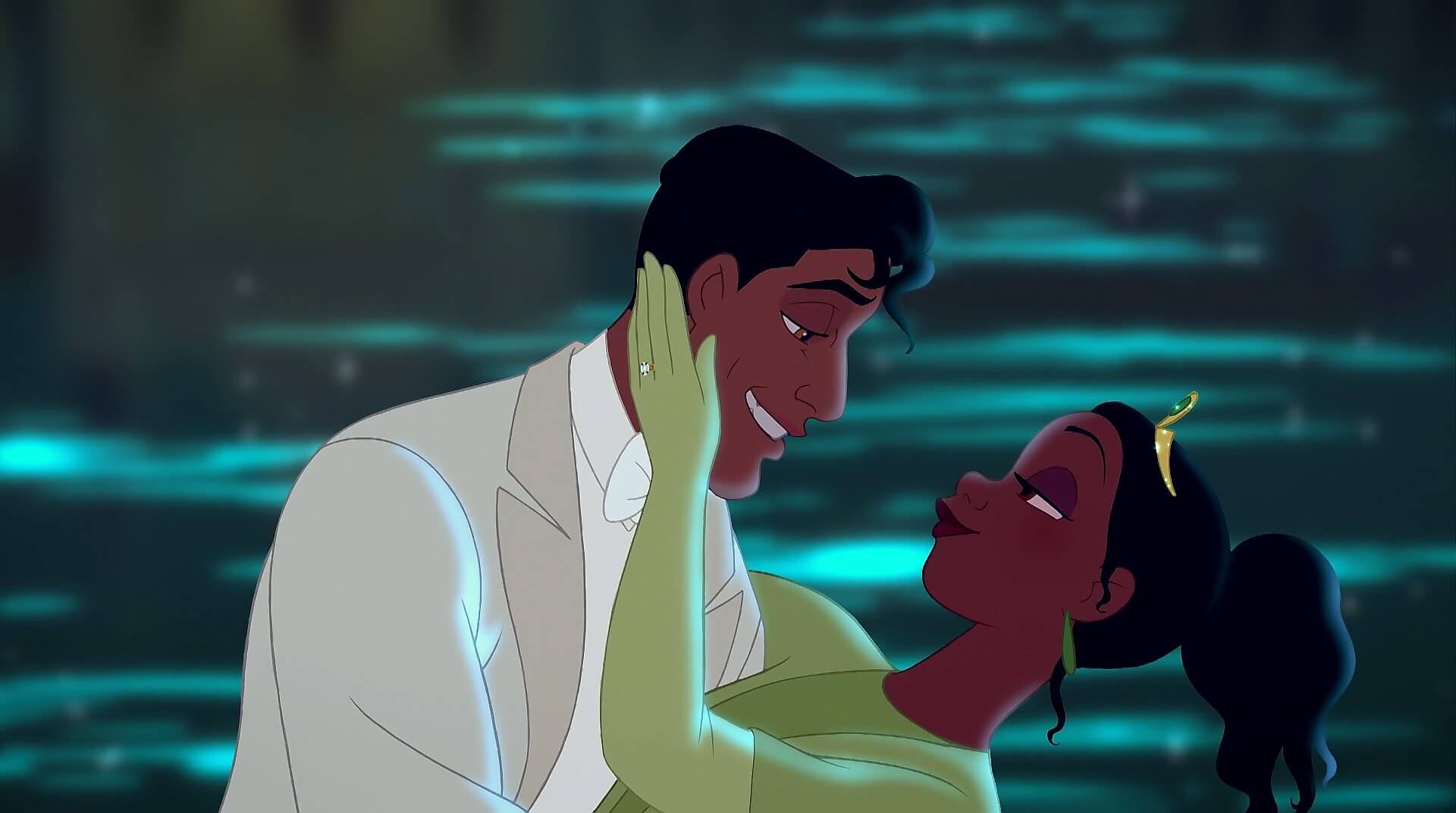 After years of box office bombs, moderate disappointments and a lot of computer animation, Disney returned to basics in 2009 with The Princess and the Frog. Arguments can be made regarding whether Disney should stick with what works or experiment with different mediums and genres, but I think both work for the most part. While The Princess and the Frog attempts to recapture a lot of the things people love about and associate with Disney, it also represents several “firsts” for the studio. Of course, Tiana is the first black Disney Princess, and basically the first animated black Disney character of any consequence.

Barring sidekicks like the Muses from Hercules and Cobra Bubbles from Lilo and Stitch, Disney Feature animation hasn’t featured many black characters or put them in the best light. This film also breaks away from the traditional Disney/Alan Menken sound, employing Randy Newman to compose the songs and score. It wasn’t only the first traditionally animated Disney film in 5 years, but the first Disney movie featuring a princess since 2001’s Atlantis, and Tiana was first to be branded as a “Disney Princess” since 1998’s Mulan. Reaching simultaneously for nostalgia and progress, The Princess and the Frog had a lot to live up to.

The Princess and the Frog begins with Eudora (Oprah Winfrey) reading the story of the Frog Prince to her daughter Tiana and Charlotte, Tiana’s best friend and daughter of “Big Daddy” La Bouff (John Goodman). Ballgown-clad Charlotte is enamored with the story and wants to marry a prince someday, while Tiana is mortified by the very thought of kissing a frog. At home, Tiana cooks with her father, who tells her that dreams can come true, but that she can’t forget what’s most important and that she must work toward her dream. Flashforward and it’s the 1920’s, and Tiana is an adult and working double shifts as a waitress, going from one job to another. Her father has passed away, but she scrapes every penny to open up her own restaurant, just like they had planned together.

Eudora urges Tiana to slow down some and enjoy life, and emphasizes to her the importance of love. However, Tiana has bigger things in mind and has no time for fun, no interest in finding her “own prince charming.” Charlotte and Big Daddy hire Tiana to cater a party, giving her enough money to buy the building she wants for her restaurant. However, the sellers attend the party and tell her she’s been outbid, citing her background as additional reasoning for not selling to her. Devastated, Tiana goes out into the moonlight and wishes on a star, something she had previously left to Charlotte. Incidentally, a frog appears right next to her, prompting her to sarcastically offer a kiss. Much to her shock, though, the frog does speak, claiming to be the visiting Prince Naveen of Maldonia. Being that Tiana is not a princess, her kiss turns her into a frog too.

The two go on a quest along the Bayou to voodoo woman Mama Odie, all the while avoiding “Shadow Man”  Dr. Facilier, the con man who transformed Naveen in the first place. This was done as part of a ploy in which Naveen’s disgruntled manservant was transformed to look like him in an attempt to get him married to Charlotte and get her father’s wealth. The curse can only be broken with a kiss from a princess, and their only option is Charlotte, who will be a princess for just 24 hours because Big Daddy was voted king of the Mardi Gras parade. Will Naveen be able to kiss her in time, restoring his and Tiana’s human forms and defeating the Shadow Man?

This is my main problem with the movie: the plot is insane in the third act. Trying to explain the sequence of events in the last thirty minutes or so is legitimately perplexing. The beginning feels perfectly fluent and functions as a series of great setups. Tiana is disgusted by kissing frogs, loves cooking with her dad — who encourages big dreams and hard work — and we get an excellent feel for the setting and characters. But as the film goes on, things become increasingly complicated. I’m torn between just enjoying the ride and actively following along. I do think it’s important for the plot to feel simple and easy to understand, no matter how many things are going on. The best movies are able to tie complex storylines together in a way that feels succinct. That being said, while the story is a major element of a film, I don’t consider it the most important.

That designation goes to the film’s characters, and this film has an amazing cast of them. Tiana is one of Disney’s most grounded protagonists, and her determination to reach her goals through hard work is admirable. I really like that, much like Mulan, they gave Tiana realistic flaws and misconceptions to work through. She starts out believing that work is what’s most important and that as long as she gets her restaurant, she’ll be perfectly happy. I can imagine people taking issue with Tiana’s arc involving falling in love because that’s exactly the kind of stuff people tend to criticize the older Disney films for. However, Disney is good at romance. I enjoy the way they show their characters progressing from annoyance to enamorment. And I think there is some truth in saying that there’s no use working yourself to death if you don’t have someone to share the reward with.

Her idolization of her father is also endearing. We only get one scene with him, but it’s a particularly effective one. It feels very realistic the way he tries to emphasize the importance of family and hard work, but Tiana only hears part of his message at the time. It’s also heartbreaking when Shadow Man points out just how hard her father worked and what little reward he got until Tiana points out that he had what he needed, which was a loving family. This film screams “Classic Disney” while also putting its own spin on things and I think it works well. Unlike Frozen, The Princess and the Frog knows how to juggle tradition with innovation, all the while telling its own story effectively with a lovable heroine who experiences meaningful change throughout her journey. You heard it here, folks: Tiana is Disney’s most interesting and nuanced female character since Mulan.

But the other characters in The Princess and the Frog also fill their roles out nicely. I really like Naveen, and he also has a meaningful character arc. He starts out as a carefree prince who has been cut off by his family for partying too hard and being unproductive, always with a different girl on each arm rather than settling down. Tiana teaches him small things like how to mince mushrooms, but he also comes to see that, in finding true love with her, he doesn’t need the high life to be happy. He even pledges at one point to work three jobs if that’s what it takes to get Tiana her restaurant. I also enjoy the scene when they’re making dinner and he remarks that, despite leading a charmed life, it all meant nothing once he realized he never learned how to do anything for himself.

Tiana’s friend Charlotte is hilarious. Seriously, everything this girl says and does is a highlight. I have heard some people say it’s bad that they made the white family good people who support Tiana and help her, but I honestly think that’s ridiculous. Not all rich people are bad, not all white people are bad, etc. Besides, this is a Disney movie. They’re not going to delve into race and class any more than they do here. This is actually the best female-female friendship in any animated Disney film. Pocahontas and her friend Nakoma barely spoke, and we never learned much about them or their relationship, or even how they became friends. Charlotte and Tiana obviously love each other, and we can see why and how well they get along. They feel like real friends, not just two characters in a movie. And there are several key moments in the film when they could so easily have made Charlotte unsympathetic, turning her into a stereotypical rich girl. But she’s so quirky and likable, and very different to Tiana. I love the irony of her being the princess freak, always wearing fancy dresses and manhunting, while Tiana gets the fairytale ending. Charlotte even looks more like a traditional Disney Princess, with her blonde updo and pink wardrobe. She could also function as a stand-in for real-life princess freaks.

Villain Dr. Facilier is voiced by Keith David, and he’s great here, as always. This character feels like he belongs in the tradition of great Disney villains. His song, “Friends on the Other Side,” is so good and really creates an interesting atmosphere. The animation in this sequence alone justifies seeing the movie. The songs and score by Randy Newman are very different from anything Disney’s ever done with their musicals, and it works out great. There are a couple of songs I don’t care for as much, but “Almost There” and “Down in New Orleans” are amazing, and get better with each watch/listen. Also of note, this is the first animated Disney film since Beauty and the Beast where each speaking actor provides their character’s singing voice. The animation is beautiful too, and there’s a great use of color across different scenes and moods. This movie has a great ambiance, and it’s very distinct. It wasn’t a huge success, but I don’t think it’s because people don’t like black-led films or traditional animation. Honestly, Disney was stupid for releasing it when they did. The Princess and the Frog premiered in December of 2009, putting it in direct competition with Avatar, Twilight: New Moon, Sherlock Holmes, and more. There also wasn’t very much marketing for the film, particularly since it was the return to that Classic Disney feel people were missing.

I really like The Princess and the Frog. The plot gets messy late in the film, and there are times when the pacing feels off, but other than that, most of it works. The characters are interesting and different from those in any of Disney’s other movies, but not disrespectful or parodic towards them. Tiana’s work ethic reminds me of Snow White and Cinderella, the main difference being that the traditional female characters worked for the joy of working and the happiness of others (and in some cases because they were forced to), while the modern woman works to achieve her own tangible, out-of-home success. This feels like an evolution rather than a rejection of what built Disney in the first place. I think it’s fair to compare The Princess and the Frog to The Little Mermaid because it changed what a Disney princess could be while reviving the classic Disney fairytale. It’s not a flawless film, but overall represents a great triumph.

The Princess and the Frog

I really like The Princess and the Frog. The plot gets messy late in the film, and there are times when the pacing feels off, but other than that, most of it works. The characters are interesting and different from those in any of Disney’s other movies, but not disrespectful or parodic towards them. Tiana’s work ethic reminds me of Snow White and Cinderella, the main difference being that the traditional female characters worked for the joy of working and the happiness of others (and in some cases because they were forced to), while the modern woman works to achieve her own tangible, out-of-home success. This feels like an evolution rather than a rejection of what built Disney in the first place.