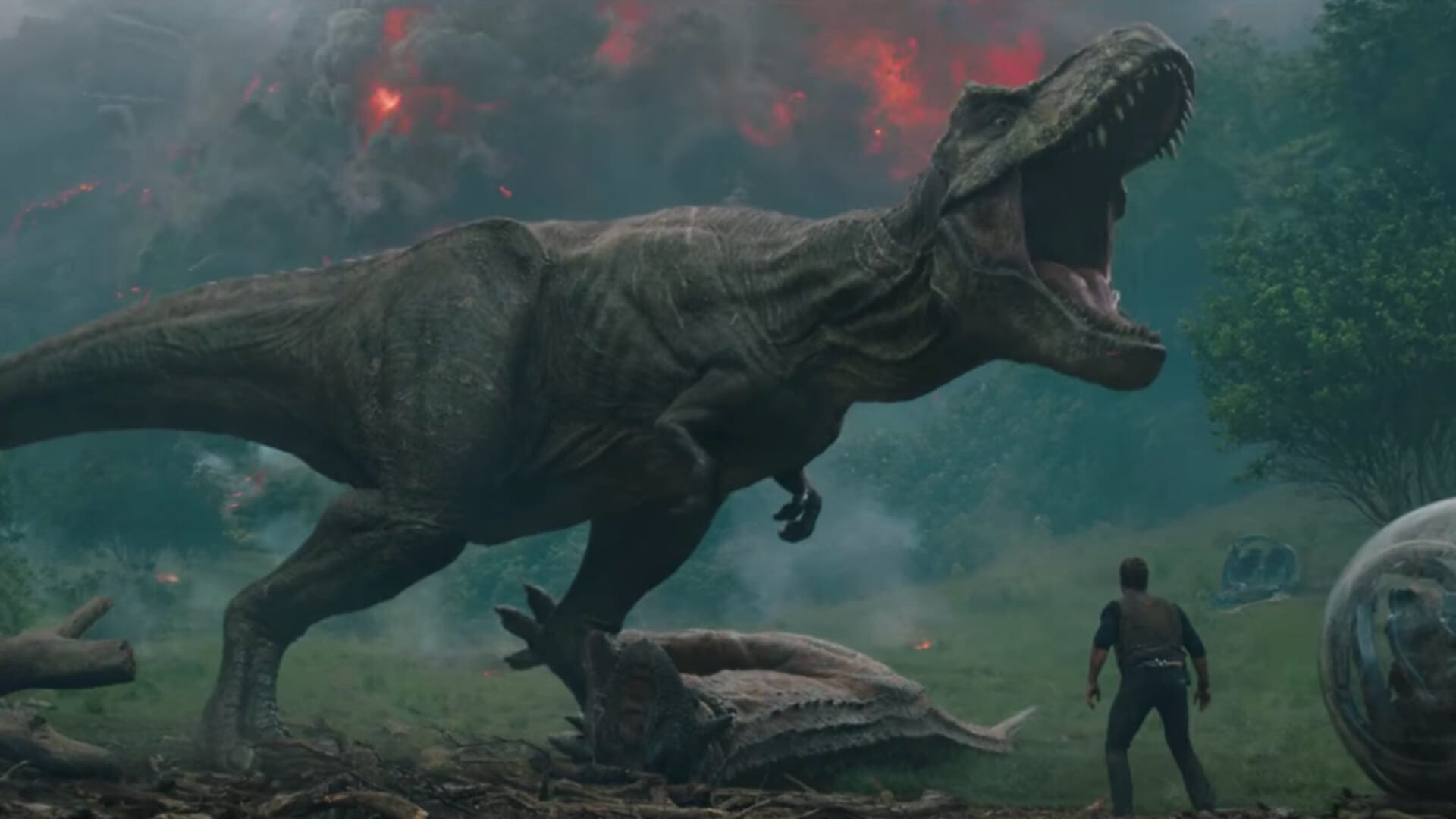 Jurassic World: Fallen Kingdom is a fairly bad movie, but a hard one to actively dislike. It isn’t a travesty that denigrates a once-great franchise (one that was only great before it became a franchise) or a mishandled mess that could’ve been something more (does anyone really have any expectations for Jurassic movies at this point?); it’s just a rushed, listless sequel trying to capitalize on its predecessor’s somewhat unexpected success while expending as little effort as possible to be a movie worth seeing.

It’s been three years since the events of Jurassic World, and Isla Nublar is in trouble: a volcano is about to erupt, and when it does dinosaurs will be extinct once again. Claire Dearing (Bryce Dallas Howard), now some sort of dinosaur rights activist, is contacted by John Hammond’s old business partner Benjamin Lockwood (James Cromwell), who wants her to help him save as many dinosaur species as he can and bring them to a new island where they will be undisturbed by man or magma. Of course, she’ll need a hand from Owen Grady (Chris Pratt), the raptor wrangler and her now ex-boyfriend. But once they get to the island, they quickly discover all is not what it seems.

The setup is pretty simple, which makes sense; Pratt and Howard need to get to the island as quickly as possible or the movie will drag. The problem is, the entire film progresses with this attitude, constantly trying to get the characters from A to B post haste and never slowing down for pesky things like suspense, atmosphere or character development. Once Pratt leads the expedition to corral the dinosaurs – chief among them his best buddy Blue the raptor – no time is taken to show the dangers of the trek through Isla Nublar, or even to give the impression that they may not find their quarry before the volcano erupts; they stumble upon Blue in no time at all, and before the scene is over the first “twist” (the reveal of which will leave anyone who’s seen a movie before sighing and looking at their watch) happens. None of this has any impact because there’s no buildup. What if Pratt and his team found another dinosaur or two before Blue, with Pratt growing more and more worried that he’d never see his friend again? What if the terrain were more hazardous than they’d planned for and a couple of his companions were killed? You know, something to give what they’re doing stakes? 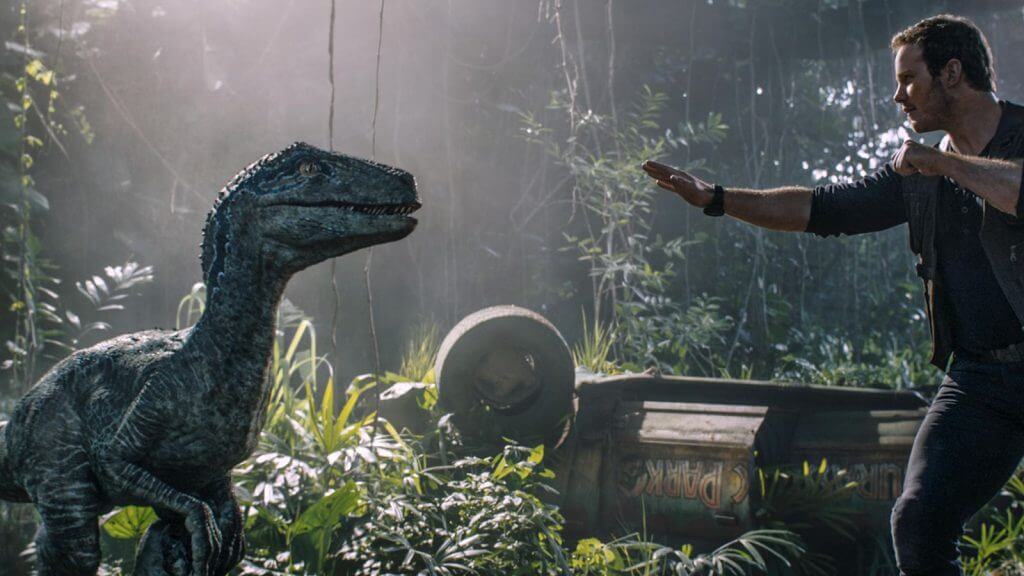 Howard doesn’t fare any better; even when things start to go wrong, she and her group never feel like they’re in any real danger. This is because Jurassic World: Fallen Kingdom often shifts tones, becoming silly and undercutting what should be nail-biting scenes. Howard’s nerdy sidekick Franklin (Justin Smith) is the kind of movie character nobody likes except mediocre filmmakers (or executives who force them into movies; either is possible) – he’s clearly supposed to be comic relief, but nothing he says or does is funny and you wish he’d just go away. His incessant whining, screaming and bumbling kill the tension by assuring us that he’s too goofy to die, and since we can be reasonably sure Howard will stick around too, there’s no reason to get invested in their plights. The other sidekick is Zia Rodriguez (Daniella Pineda), who is tough, sassy and absolutely nothing else. She and Franklin are types as opposed to characters, and neither one draws you in the way, for example, the supporting players in Jurassic Park did. Those people felt real, and as a result felt like they could die at any moment… and a number of them did! These two just take time away from the much more charismatic leads.

Not that Pratt and Howard have much of anything to work with. They’re fine when trying to survive prehistoric predators, but when they’re supposed to be relating to each other as human beings we feel nothing. There’s a scene early on where they reminisce about the end of their courtship and they both sound like idiots; if this is why they broke up, they don’t belong in a relationship. Again due to the rushed nature of Jurassic World: Fallen Kingdom, they have precious few quiet moments together, and while the atrocious writing in that initial meeting might indicate this is a good thing, it also means there’s no reason to get invested in them, individually or together. The two actors do what they can, and Pratt is still one of the most lovable guys in Hollywood right now, but they’re not miracle workers. As for the rest of the cast, James Cromwell is able to convey humanity better than anyone, Rafe Spall goes from dull to hammy as Lockwood’s protégé, Ted Levine (whom I didn’t even recognize) is grating as the head mercenary, and Isabella Sermon is fine as one of those preternaturally smart children who seems to only be present because Jurassic movies all need at least one kid and does nothing that couldn’t just as easily have been accomplished by anyone else until the end.

And the end is where things brighten just a bit; in its last quarter, Jurassic World: Fallen Kingdom finally begins to come alive. The tension increases, an enemy dinosaur emerges that has a pretty neat design, and the heroes almost feel like they’re in trouble (almost; it’s too little, too late for us to forget what movie we’re watching). There’s also a neat moral dilemma introduced – one which is set up in the beginning – and one of the main characters even proves to have an arc! That this arc is ignored for the bulk of the film is a shame, but at least the finale feels like it serves a purpose.  Some of the same problems persist, like the fluctuations in tone and the obnoxious sidekicks that refuse to disappear, and parts of the action are filmed choppily, but at least we’re finally allowed to have some real fun. 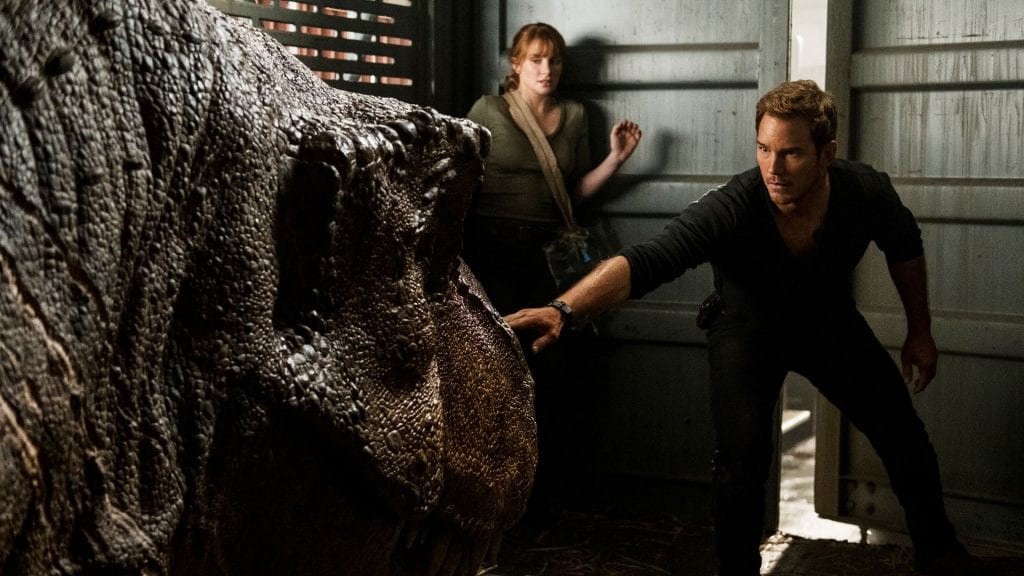 The technical aspects of Jurassic World: Fallen Kingdom don’t make up for its story, character and tone issues either. The special effects are mostly pretty good, and the CGI is better than that in Jurassic World, but they never reach the wondrous heights of Jurassic Park; one moment tries to recreate an iconic image from the original film (there are actually many callbacks throughout Fallen Kingdom, most of which simply remind you that we’re a long way from Spielberg’s classic), but the awe is gone because, while the effects are pretty good, they’re evoking something much better. The score is forgettable, a series of basic adventure movie pieces that, like the tone of the film, toggle between two extremes: they either melt away or they so engulf the movie that the scene is overwhelmed. At one point, the music swells so loudly that Pratt’s lines are drowned out.

This is indicative of the overarching problem: very little care seems to have gone into much of this movie. Jurassic World: Fallen Kingdom has a rushed story, bland-at-best characters, a disastrous lack of suspense or danger, a sometimes distracting and sometimes monotonous score, and special effects that are good but pale in comparison to a movie it can’t stop referencing. The climax is fun and raises some interesting ideas, and Pratt, Howard and Cromwell give it their all, but ultimately the movie isn’t worth preserving in amber.

Jurassic World: Fallen Kingdom has a rushed story, bland-at-best characters, a disastrous lack of suspense or danger, a sometimes distracting and sometimes monotonous score, and special effects that are good but pale in comparison to a movie it can’t stop referencing. The climax is fun and raises some interesting ideas, and Pratt, Howard and Cromwell give it their all, but ultimately the movie isn’t worth preserving in amber.