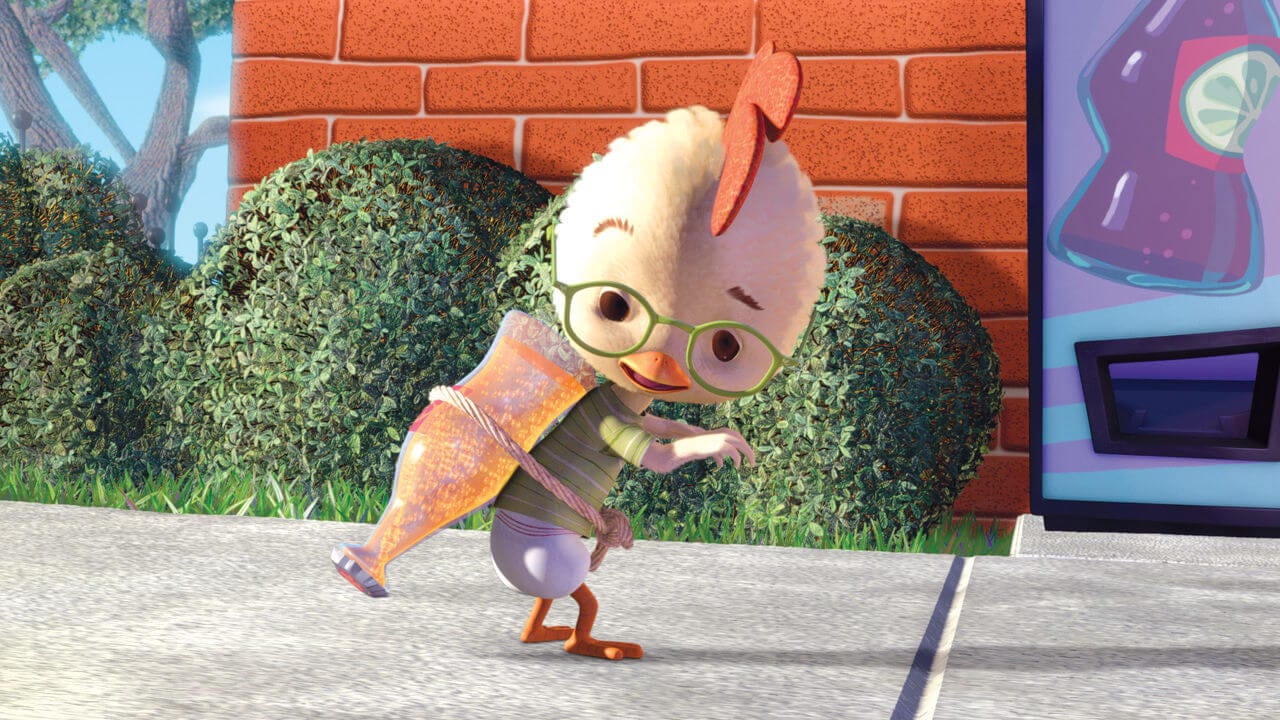 In the mid-2000s Walt Disney Animation Studio was floundering, struggling to remain relevant. Their attempts at action and sci-fi had backfired, as had the slapstick comedy of Home on the Range. However, they pressed on with 2005’s Chicken Little, another comedy with animal characters. Chicken Little was initially going to be a girl in the Disney treatment, and was set to be played by Holly Hunter, but the studio decided that it wasn’t as effective for the character to be female because boys are more likely to be teased for being short, and the executives at the time also wanted a father-son dynamic in the film. As a result, Chicken Little was re-cast with Zach Braff and parts of the story were re-worked.

Chicken Little opens with the narrator struggling to choose a way to tell the story: “Once upon a time,” a storybook opening, and a jab at the iconic “Circle of Life” sequence in The Lion King. Chicken Little is hit by a piece of the sky and freaks out, causing a city-wide panic which turns sour when everyone else comes to the conclusion that nothing happened. One year later, everyone remembers the episode and mocks him relentlessly for it. His father treats him like an embarrassment as he drops him off for school, leading to more mishaps as Chicken Little loses his pants and makes a makeshift pair out of his homework. Two other students, Abby Mallard and Runt of the Litter, are also mercilessly tormented by their classmates for being ugly and fat, respectively. They have a friend named Fish out of Water, but ironically this character doesn’t seem to get teased like his companions.

In P. E. the teacher divides the children into teams based on popularity. Chicken Little wants to try out for the school’s baseball team but his father tells him not to get his hopes up. Nonetheless, he makes the team and wins a game, changing his public image. His father is proud of him, but eschews the ”closure” his son wants. Chicken Little finds another piece of the sky in his room and immediately calls his friends. It turns out that it isn’t really the sky falling, but pieces of an alien spaceship. Chicken Little alerts the town, but they miss the spaceship and assume he is pulling another stunt. His father doesn’t believe him, playing the “embarrassed parent” card again. A baby alien follows him to his house, much to the amazement of Chicken Little and his friends. The alien spacecraft comes back looking for the baby, and with the help of his friends and (eventually) his father, Chicken Little returns the child to his family. This earns Chicken Little the respect of the town, the approval of his father, and the courage to kiss his friend, Abby. 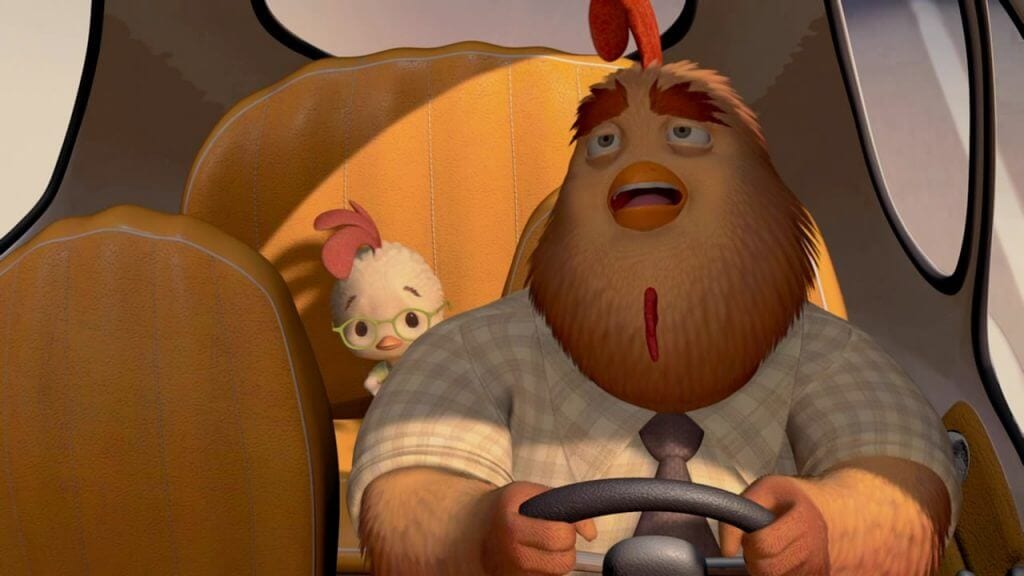 Chicken Little is really bad. The characters are not likable, the plot is all over the place and the dialogue is poorly conceived. It’s such a shame, as the film is directed by Mark Dindal, who previously worked on several animated Disney movies, as well as in the art department for The Rocketeer and writing the underrated Cats Don’t Dance. There is also an amazing voice cast whose talents are surprisingly wasted. The film stars Zach Braff, Garry Marshall, Joan Cusack, Don Knotts, Amy Sedaris and Steve Zahn, with Adam West, Wallace Shawn, Catherine O’Hara, Patrick Warburton (who only speaks once, near the very end) and Patrick Stewart in supporting roles. Really, I’m amazed that half of these people wanted anything to do with this film.

One of the main things I dislike about this movie is the tone. First of all it’s inconsistent; it feels like we’re supposed to be amused by Chicken Little’s many failures and embarrassments while also feeling bad for him. This is confusing, and creates tonal dissonance: is the audience intended to laugh at the protagonist or genuinely feel sorry for him? Why are these scenes framed as comedic when the characters later lament them? It just feels like the writers weren’t thinking this through as they pieced the movie together. Chicken Little’s relationship with his father is poorly handled too. His dad is a jerk who treats him like a burden, and never stands up for him. They do address this, but I feel that a hug and an apology doesn’t make up for 70 minutes of conditional, insincere love from the only parent he’s got. This film is so mean-spirited it’s just uncomfortable to watch, a problem I also had with the film version of Roald Dahl’s Matilda.

The animation in Chicken Little is pretty good for its era, but not on the level of what Pixar and DreamWorks were doing at the time. The character designs are not appealing, but part of me wonders if they would grow on me if I liked their personalities. I’ve initially disliked a film/TV series’ art style before and been won over by the characters and story, but Chicken Little offers nothing to compensate for its many faults. I find the character designs in Zootopia, another Disney CGI film about anthropomorphic animals, much more appealing. Disney, in my opinion, never really mastered computer animation until Tangled, and that’s the first time they were really able to compete with DreamWorks’ technological mastery and Pixar’s genius.

The music in this film is okay. The score is pleasant at times and never sticks out as bad. There are a couple of songs I really enjoy, such as the R.E.M.-performed “It’s the End of the World As We Know It,” which was used excessively in the film’s marketing. If anything, there are too many songs; this is not a musical and yet a significant portion of the runtime involves songs in the background or characters performing karaoke. There’s even a scene after Chicken Little wins the baseball game where he sings “We Are the Champions” by Queen, with revised lyrics. It’s painful; if you ever do see this movie, be ready to put on earmuffs for this scene. I’m not sure why they decided to put so much effort into the film’s soundtrack while the characters and story are left a mess. 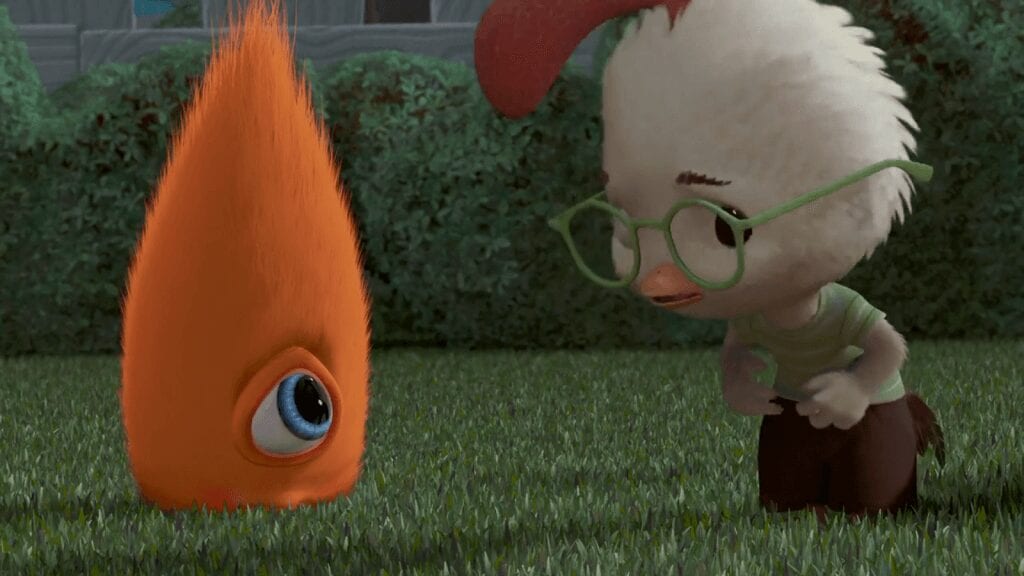 There are a couple of genuinely funny moments in the film, mainly involving the alien family and the movie made about Chicken Little in the end. The idea of this character being played by a muscle-bound Adam West rooster is pretty funny, and his friends are similarly beefed (or, in Abby’s case, prettied) up. But the repeated “who we talking about” uttered by a few characters is not funny, and repeating the joke does not make it better. His friend Runt has frequent panic attacks and is always screaming and this is similarly un-funny. I didn’t really laugh out loud, but I liked the scene where a boulder goes flying through the screen as people in a theater are watching Raiders of the Lost Ark.

Strangely, although there are serious problems with the plot and characters, I also found myself questioning even smaller things in the movie. For example, when Chicken Little loses his pants, he runs to his locker and makes a pair out of a sheet of paper littered with math problems. Why didn’t he use a blank sheet of paper? For that matter, why does he need pants, since his friends Abby and Fish don’t wear any? In fact, it bothers me that Fish walks on his fins like legs. If this was a good movie I could suspend my disbelief a little more, but I was not entertained so I found my mind wandering.

Chicken Little isn’t Disney’s worst animated film, but it’s one of them. The jokes are bad, the plot and tone are just bizarre and the characters themselves are terrible. The music and animation are serviceable but nothing to write home about. It’s hard to know what they hoped to accomplish here, but the output at Disney was sadly nothing compared to Pixar and DreamWorks at this point. Right after this, Disney would outright purchase Pixar, John Lasseter would take over as creative chief and things would start changing.

Chicken Little isn’t Disney’s worst animated film, but it’s one of them. The jokes are bad, the plot and tone are just bizarre and the characters themselves are terrible. The music and animation are serviceable but nothing to write home about. It’s hard to know what they hoped to accomplish here, but the output at Disney was sadly nothing compared to Pixar and DreamWorks at this point.