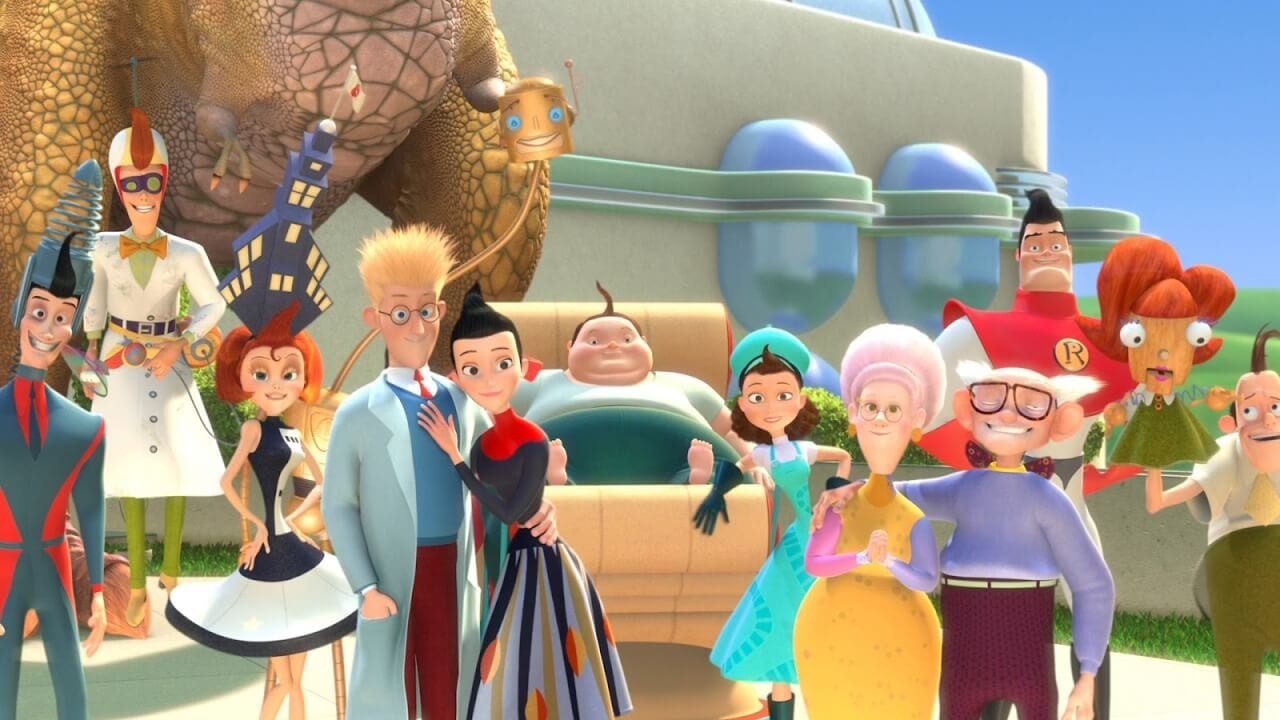 After 2005’s Chicken Little, some major changes were set to take place at Walt Disney Feature Animation. Disney’s initial agreement with Pixar had expired and they elected to purchase the animation powerhouse, with John Lasseter becoming chief creative officer for both studios. The production of direct-to-video sequels to Disney classics was stopped, the Shrek-like meta humor in feature animated films came to an end, and output was about to vastly improve.

Meet the Robinsons is based on a book by William Joyce called A Day With Wilbur Robinson. It tells the story of Lewis, a boy left on the porch of an orphanage as a baby. He’s a brilliant kid, always inventing new things but failing to impress potential adopters. Through a series of mishaps, Lewis ends up time-travelling to the future, meets a family of unique individuals and learns what a family really is.

Meet the Robinsons is less a realization of the changes Disney was going through and more of a transitional piece. Unlike Home on the Range or Chicken Little, this film has its heart in the right place and it gets a lot right, but it’s still far from perfect and the studio’s computer animation had a long way to go. For reference, in 2007 Pixar released Ratatouille and DreamWorks released Bee Movie and Shrek the Third. While I would say the latter two films aren’t as entertaining or heartwarming as Meet the Robinsons, technically speaking Disney just wasn’t keeping up. 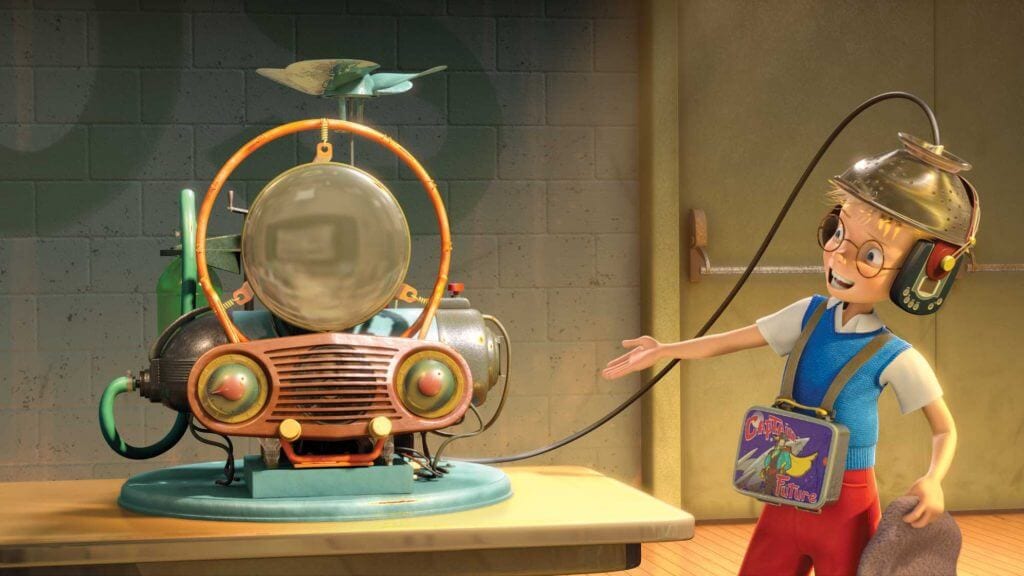 The characters in Meet the Robinsons look plasticy, like their skin is made of rubber. Their movements are unnatural at times, and even simple motions like hugging or throwing objects don’t look quite right. I actually really like the character designs in this film, and it has a look distinct from other Disney movies, as well as anything the other studios were putting out. There is also a great amount of variation in the film’s color pallette; sometimes Meet the Robinsons looks like a work in progress, and many of the buildings and landscapes look fake, with surfaces that are like something out of an old video game. Everything is very smooth and flat, and the textures aren’t right; the hair in this film looks like it’s molded. The animation is also too fast, and in the action sequences you struggle to keep up with what’s happening.

Speaking of fast, Meet the Robinsons feels very rushed, particularly in the scenes involving the family and the future. This is a real shame because there are a lot of good ideas and visuals here, but the film never slows down enough to let us enjoy them. For example, there’s a sequence about what the future could be like if something goes wrong, and it seems really dark and creepy, but the scene only lasts a couple of minutes and we really only get to see one building and a few characters. It feels like a lot more could have been done with this concept to raise the stakes and show just how different the future could look. By the same virtue, we don’t get to see enough of the future and this magnificent city as it really is to compare the two. It feels like Meet the Robinsons is racing to its 95-minute runtime.

This rushed feeling actually harms the film’s plot and characters at times; the Robinsons offer to adopt Lewis upon discovering that he’s an orphan, and he absolutely loves all of them. We’re supposed to believe that this mutual familial bond has been formed over the course of one afternoon, since Wilbur brought Lewis over for dinner. The scenes with the family are great and the highlight of the film, but because Lewis gets such a short amount of time to interact with and get to know them it doesn’t feel earned when they want to adopt him. This may be a nitpick, but I also find it a little disturbing when Lewis calls Franny “Mom” once you learn what his relationship to the family really is. 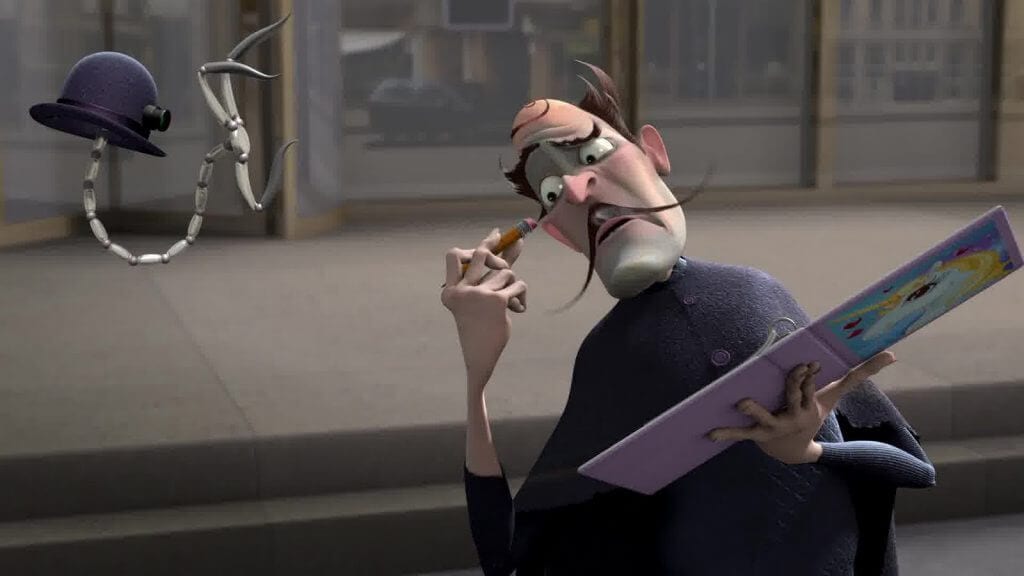 One thing I love about Meet the Robinsons is the voice cast, specifically the adult actors. The orphanage’s matron, Mildred, is voiced by Angela Bassett, and while she’s not in the film a whole lot she is one of the rare positive influences Lewis has. She’s encouraging, sweet and downright motherly. Laurie Metcalf plays Wilbur’s grandmother Lucille, director Stephen J. Anderson plays grandpa Bud, and Nicole Sullivan and Tom Selleck play his parents. These guys all range from sweet to hilarious and it’s extremely effective. Adam West plays Uncle Art, a pizza delivery guy who dresses like a superhero and drives a spaceship. The film’s villain, the enigmatic Bowler Hat Guy, is also voiced by the film’s director. I have mixed feelings on this character. I like that he’s someone Lewis knows, and the reveal could genuinely come as a shock if not for a couple of hints that reveal a little too much, such as his sobbing at Goob’s story about losing the baseball game. His design is interesting and I can also appreciate that, like Lewis, Goob learns something in this film, something Disney doesn’t do much with its villains. We never see what ultimately happens to him, and given his low intelligence and victim complex it’s hard to imagine it’s anything great — although Lewis does make the baseball game right. But doesn’t it kind of send a weird message to have the hero fix the villain’s problems for him? Goob’s issue was that he blamed others for his problems; Lewis preventing the loss from happening doesn’t feel like a satisfying resolution to this.

The child actors don’t fare quite as well. Jessie Flower of Avatar: the Last Airbender fame plays young Franny, and it’s not really her fault, but the line delivery is so fast and annoying that she leaves little impression. She’s only in the film as this character for a couple of short scenes, and they were clearly trying really hard to make it obvious who she is in the future. Due to a complicated production entailing re-animating and re-writing of the script, the film took so long to make that Wilbur and Lewis both had to be recast, as their initial actors got too old. I’ve actually seen movies and shows where this worked OK, but in Meet the Robinsons the changes are both very obvious. One of Wilbur’s actors has a deep voice and almost sounds like an adult, while the other sounds like a kindergartener. Lewis’ actors also sound wildly different. You can literally tell where one actor starts and the other ends. While not the most important element of the film, it is distracting.

Meet the Robinsons wavers a lot when it comes to comedy. Some scenes are very funny and others just make me wonder what the filmmakers were thinking. The comedy is at its best when it’s really weird, such as one of Wilbur’s aunts inexplicably being a hand puppet and the dog wearing glasses. But the loud/fast comedy doesn’t work at all, and comes off as irritating more than funny. However, I  maintain that the worst jokes in this film are better than the best in the two films preceding it in the Disney canon. 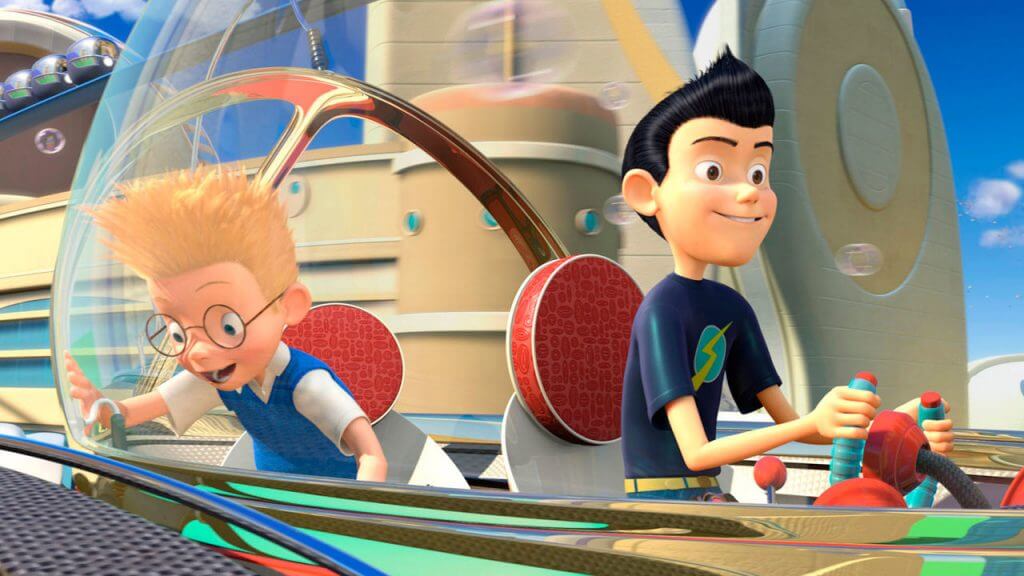 I think the problem with Meet the Robinsons is that the creators didn’t know exactly what they wanted to do. This film is a family drama, a comedy, a sci-fi adventure, and a parable about resilience and personal responsibility. It had a troubled production, and when Lasseter stepped in much of the original work was scrapped. But while it doesn’t exactly rise above its challenges to become great like Beauty and the Beast did, I don’t think it’s bad either. I actually really enjoy Meet the Robinsons, and despite some bumps and weird stuff I think it’s entertaining and never boring. The funny sections are hilarious, the visuals aren’t without merit and there are some great moments with the Robinson family. The scene where Lewis actually gets adopted is amazing and so sweet, and I think the reason it works so well is because it’s free of dialogue. “Little Wonders” by Rob thomas plays as Lewis sees his new home and embraces his new adoptive parents. The expressions on the characters tell you more than dialogue ever could. In fact, the score by Danny Elfman and songs by various artists are a highlight of the film.

It’s hard to say whether or not I would recommend Meet the Robinsons, as it’s very flawed and very weird, but it has a special place in my heart and I do think it should at least be remembered and looked at from time to time. The end credits even contain a famous quote from Walt Disney himself: “Around here, however, we don’t look backwards for very long. We keep moving forward, opening up new doors and doing new things, because we’re curious… and curiosity keeps leading us down new paths.” This feels so appropriate both for this film and as a promise of things to come.

I think the problem with Meet the Robinsons is that the creators didn’t know exactly what they wanted to do. This film is a family drama, a comedy, a sci-fi adventure, and a parable about resilience and personal responsibility. It had a troubled production, and when Lasseter stepped in much of the original work was scrapped. But while it doesn’t exactly rise above its challenges to become great like Beauty and the Beast did, I don’t think it’s bad either. I actually really enjoy Meet the Robinsons, and despite some bumps and weird stuff I think it’s entertaining and never boring. The funny sections are hilarious, the visuals aren’t without merit and there are some great moments with the Robinson family.