"Magic has a way of uniting things that ought to be together." 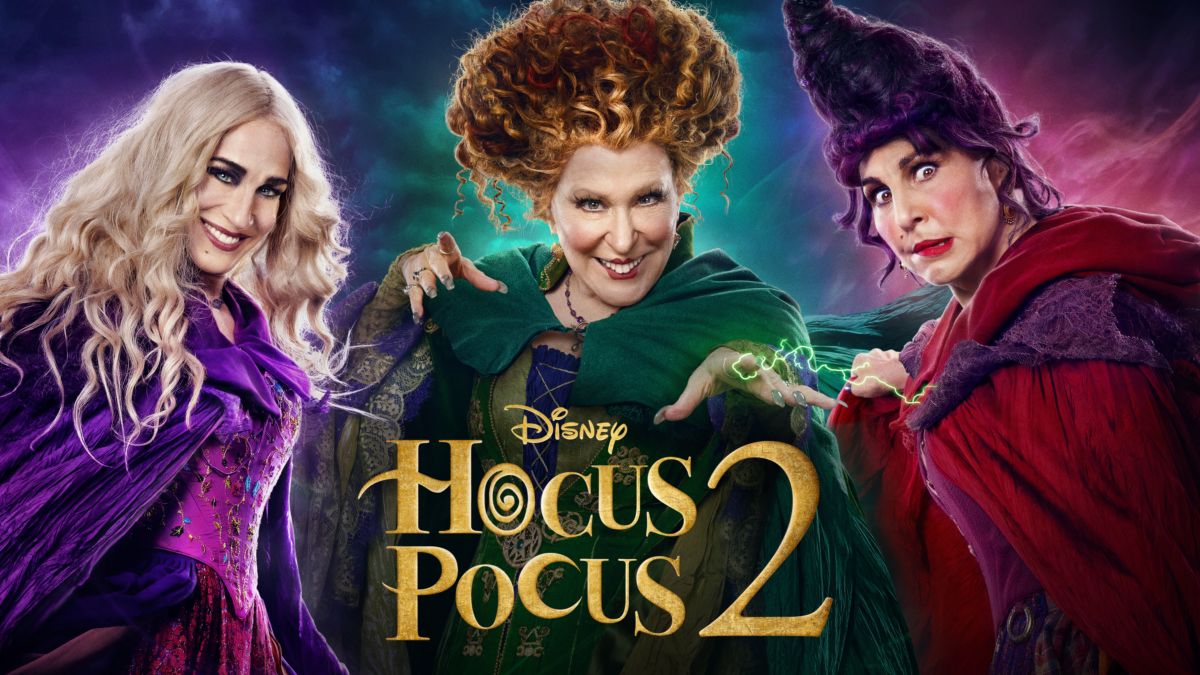 This Friday saw the release of the much-anticipated Hocus Pocus 2. The 1993 original has become a Halloween staple for families and single millennials alike. For some background, I never liked Hocus Pocus. I can’t remember if I saw it when I was little, but every time I’ve seen it since my teen years has been mystifying. I don’t understand what people see in this movie. The humor is childish, there’s no interesting character development, and the acting is way over the top. Despite being a kid’s movie, there are strange (but not funny) references to the lead being a virgin and his love interest’s boobs. Some family movies from the 80s and 90s possess a sort of cheeky naughtiness, but this isn’t that. This is just campy, ridiculous pseudo-horror. So, while I wasn’t surprised by the sequel’s announcement, I wasn’t pleased either. Sadly, I love talking about Disney and Halloween; these interests have converged in this movie. Let’s have a look.

The first thing I noticed in Hocus Pocus 2 was the comedy. More specifically, it isn’t funny. I didn’t laugh once during the 100-odd-minute runtime. In contrast, I can remember a couple of good jokes early on in the original. The first movie is corny, and I wouldn’t call it a good comedy, but the first five minutes of Hocus Pocus 2 are simultaneously impossible to take seriously and too loud and over-the-top to be funny. For a film that chooses to have a prologue, it rushes through it faster than the young Winifred (Taylor Henderson) runs through Salem. Her march back home sets up multiple jokes, like how unintentionally cruel she is, her disregard for social customs, and the woman who runs back into her home. But none of these gags are given room to breathe; if you somehow managed to laugh at one, you would miss the next. This scene is just poorly timed, and this timing issue with the comedy permeates the whole film. It’s a shame because, for what it’s worth, the opening logo and music are really cool. The usual Disney Magic Kingdom opening is sped through only to turn dark and spooky. The music was one of the only things I liked about the original Hocus Pocus. Several of the same musical cues and leitmotifs return here, which is appreciated. 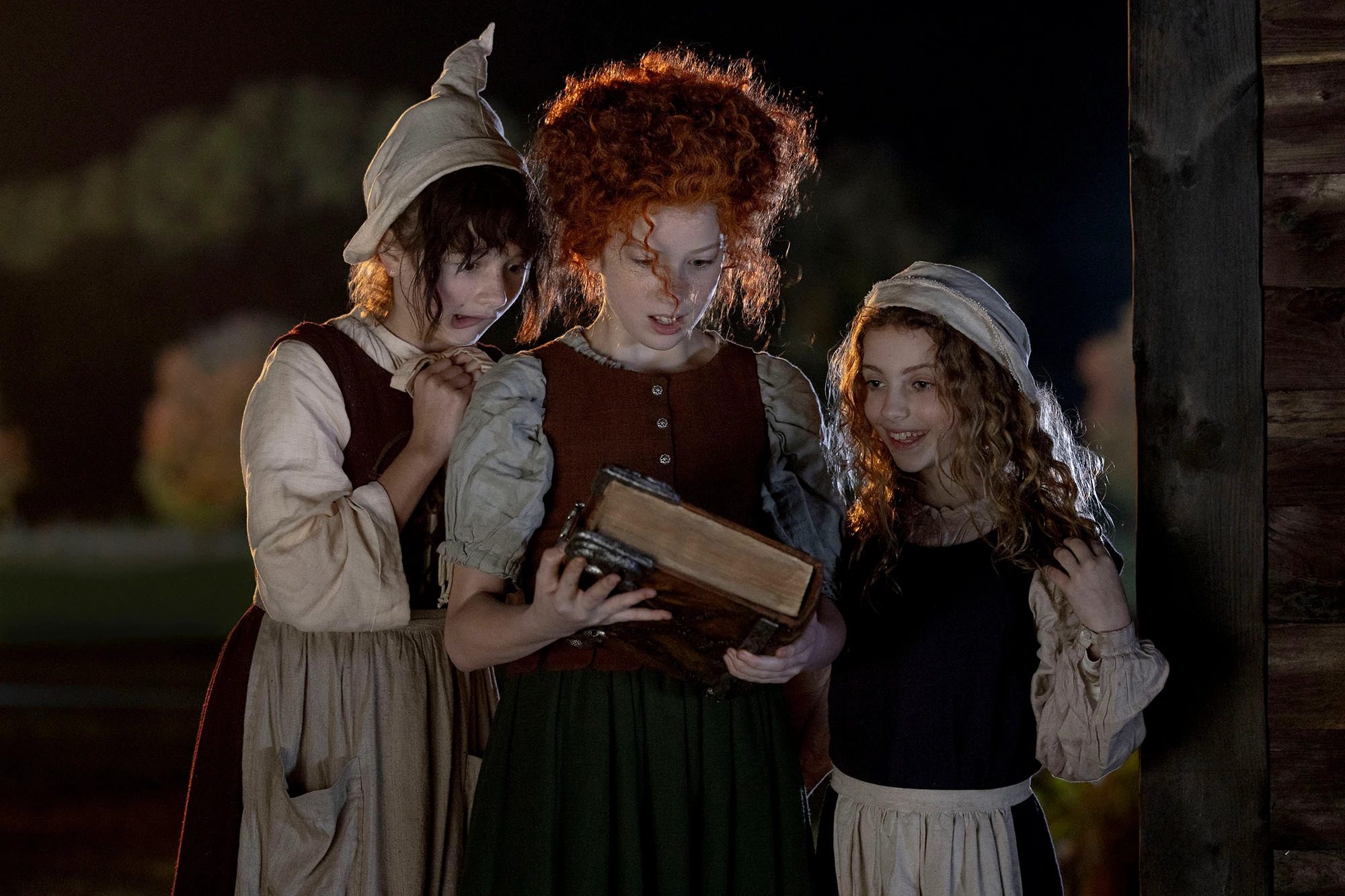 The acting is just too much in Hocus Pocus 2. At least, the witches and Billy Butcherson (Doug Jones) come on too strong. Meanwhile, the central children have next to no personality; we learn everything about them through clunky expository dialogue, not action. I understand trying to differentiate the goofy, morally debased witches from the average children caught in the crossfire. But as much as it pains me to say it, this is something the OG did better. Omri Katz as Max wasn’t a character that I found all that interesting or well-developed, but he did seem like a normal kid with everyday problems. His inattentiveness towards his little sister (Thora Birch) was even nicely paralleled in the tragedy of the Binx siblings. But the kids here have no charisma, and I can’t tell you much about them after watching a feature-length movie starring them. Whitney Peak’s Becca is a burgeoning witch, Belissa Escobedo is the anxious peacemaker as Izzy, and Cassie (Lilia Buckingham) is the best friend they don’t hang with anymore because she has a boyfriend. I have another issue with this trio that I’ll come back to. I can’t believe I’m about to say this, but the one thing I got out of Hocus Pocus 2 is slightly more appreciation for the first movie. It’s still not very good, and I’ll never fully understand the appeal, but it understood the basics of writing sympathetic child protagonists, and that’s more than I can say for the sequel.

The main conflict among the central teen trio involves Cassie’s boyfriend; her friends don’t like him, and she’s usually with him, so they neglect her. You’re intended to feel sympathy for Izzy and Becca because their friend has grown up and gotten into a relationship, but you know what? I don’t! I understand that kids (and adults) grow apart, and friendships evolve or even dissolve over time. But I don’t see how Cassie’s boyfriend calling Becca and Izzy witches makes him a bully when they literally are witches. This isn’t even mean; he’s joking around, and they abandon their best friend for dating him because of it. The morality in these teen movies is usually skewed, but boy, I found this uncomfortable. They also make the boyfriend clueless and dumber than a rock, which isn’t funny to me. This is just like Disney Channel live-action sitcoms that usually have an unbelievably dumb character for comic relief. To me, this would be funnier if the character were stupid in a realistic way, but they usually go for “can’t spell basic words” or “is confused by shoelaces.” These people are paid to write this stuff. All of the male characters in this movie are either stupid (the Mayor), unhelpful(Cassie’s boyfriend), or the cause of the problem (Gilbert, the magic store owner). This is odd, since the original movie’s lead was a teenage boy. 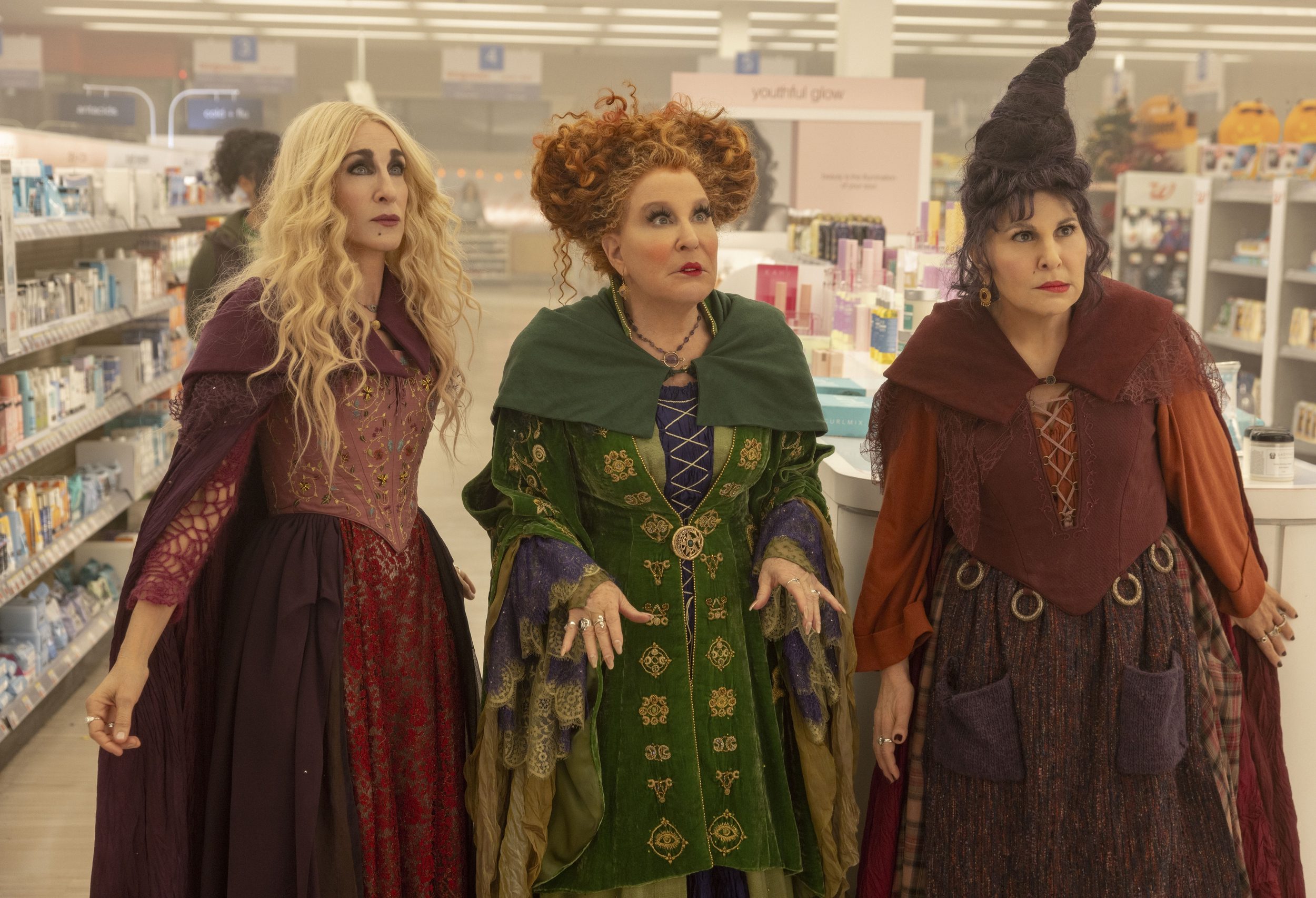 I probably wouldn’t have noticed that or made much of it, but the gender issue is a recurring theme in this movie, for some reason. Calling it a “theme” is giving Hocus Pocus 2 more credit than it deserves, but I’m not sure how else to describe this film’s attempts at social commentary. The young Sanderson Sisters are presented as victims in the film’s prologue. You see, Winnie only acts out because the town minister wants to marry her off! And the Sisters only become witches because the denizens of Salem try to separate them! And when Winnie’s would-be betrothed calls her ugly and disgusting (which she is), she gets punished for saying similar to him. “You can’t speak like that to a man,” one of the villager women says. See? These baby-eating, curse-slinging baddies aren’t really evil. Society made them fight for survival because they’re women. Sound familiar? Well, I’m tired of it. I’m not sure why the movie does this because, in the end, they still want to maim and eat people, even if it isn’t necessary at the time. 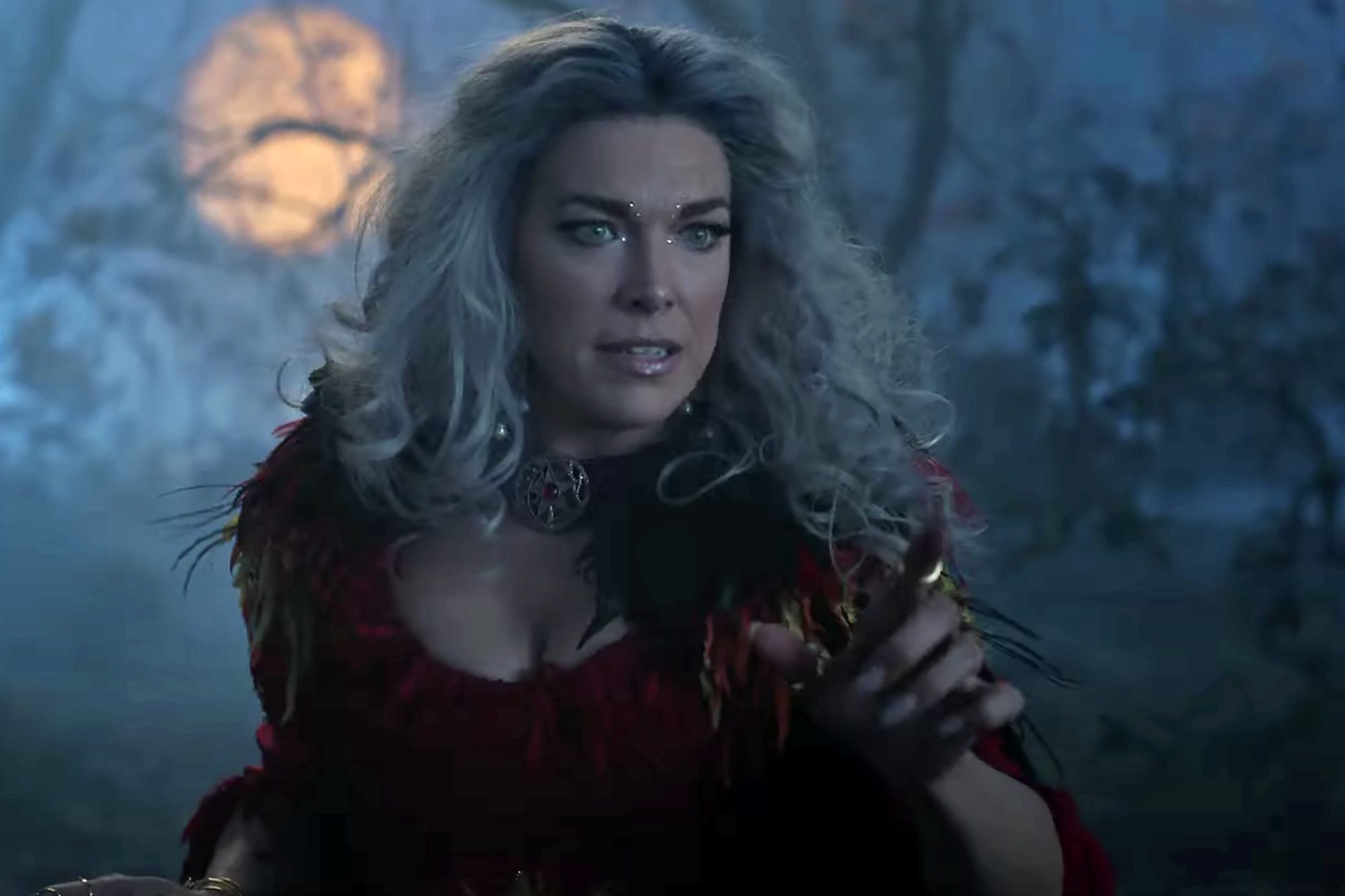 In the prologue, they even meet another witch (Hannah Waddingham), who gives them Book and teaches them the importance of Sisterhood. I thought Book came from the Devil himself? Is that not stated clearly in the original? I haven’t seen it in years (and don’t want to), but they shouldn’t be overwriting their own lore, even if it is to feminize/modernize it. In the first movie, Winnie was selfish and didn’t prioritize her sisters. She always claimed to be the hottest, most powerful, etc. Hocus Pocus 2 can’t decide if the Sanderson sisters are society’s outcast victims or evil, bloodthirsty crones. For me, that makes it impossible to care about them at all.

This includes the ending, which is very unsatisfying because it isn’t consistent with Winifred’s character (such as it is). It also removes any tension, and the powers that Becca gains as a witch don’t matter because she doesn’t use them in combat. Why make her a witch at all? Oh, I almost forgot, “sisterhood” and covens and all that. That’s why. At least Hannah Waddingham is pretty good and looks great in this witch get-up. She feels like she’s from a different movie – a better one.

Overall, Hocus Pocus 2 is far worse than the original, and even worse than I expected. I don’t like Hocus Pocus, but Kenny Ortega is a skilled director, and you can see the difference with Anne Fletcher taking over for the sequel. Ortega’s films have a professional polish, and he’s a masterful choreographer. I usually don’t like the types of films he does, but he is good at his craft. The sequel is somehow less funny than the original, the characters are flatter, and its attempts to give the story a deeper meaning are insulting. The biggest takeaway from Hocus Pocus 2 is that the first movie actually had something going for it, something that can’t just be superimposed on a streaming movie with a feminist agenda.

Hocus Pocus 2 is a masterwork in missed opportunity. Rather than aging the film up for the original's now middle-aged fans, it lingers on childish humor and Disney Channel drama. I can't imagine even die-hard fans of the original loving this.

Nothing beats the original.

I kinda like the original Hocus Pocus. It’s not a masterpiece by any means, but I find the characters and humor quite charming. Also, as a massive cat-lover, I really like Binx!

I haven’t watched the sequel, and I’m not sure I even want to. The woke nonsense and problematic atheist/pagan propaganda in the movie are massive turn-offs, and it just makes me miss the 90s when not everything was political and movies were actually entertaining. Heck, I’d rather rewatch the terrible Haunted Mansion movie from the 2000s than any modern movie! It was on of the worst movies I’ve ever seen, but at least it wasn’t plagued with woke nonsense!