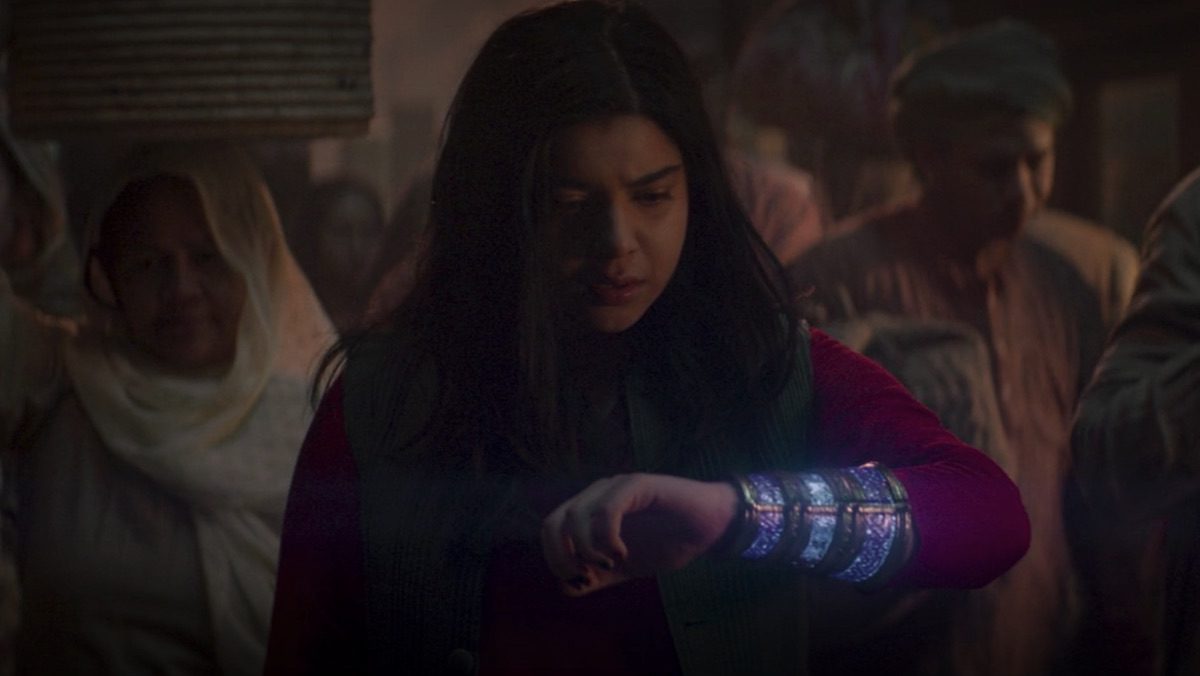 Okay, I think we can call it: Ms. Marvel sucks. I tried to go with it, to enjoy the good elements and hope they were leading somewhere, but “Time and Again” irrevocably ruins any chance of a decent payoff. Half of it is boring, and the other half is an anticlimactic end to the season’s story, with next week’s finale assuredly acting only as an epilogue. There are a couple of good moments, but they buckle under the weight of everything surrounding them.

Kamala’s family history is revealed as she finds herself transported to the past.

If you followed my reviews of The Flash this season, you know how impressed I was with the way most episodes had streamlined plots, often focusing on a couple of characters to tell a more focused story. “Time and Again” is similarly streamlined, but it doesn’t work here because Ms. Marvel is rushing to finish its first – and, if the ratings are any indication, only – season. The first half shows how Kamala’s great-grandmother, Aisha, met her great-grandfather, Hasan, and it’s one of the most boring love stories I’ve ever seen. Neither of these two has an ounce of personality, despite some ill-conceived attempts to make Hasan seem funny. Like Kamala’s immediate family, it never works, although the “humorous” moments are few enough and far enough between that they don’t turn Hasan into a joke like Kamala’s dad and brother. He’s just painfully dull, as is Aisha.

“Time and Again” offers few surprises in its opening half. Aisha and Hasan fall in love, have a daughter (Kamala’s grandmother, Sana), and flee at Aisha’s behest when Najma finds her, demanding the bangle and Aisha’s help returning to Noor, their home dimension. The only halfway entertaining part of this is Najma, who is suitably sinister in her insistence on Aisha’s cooperation. It’s a shame Ms. Marvel gives actress Nimra Bucha so little to work with because she’s capable of crafting a good villain, and any menace Najma has is thanks to her performance. But she’s barely around, with more time spent with Aisha and Hasan as they look solemn and lifeless. Speaking of which, once they get to the fateful train station, Najma proves her bad guy mettle by stabbing Aisha for her refusal to give up the bangle. This not only makes Najma more evil but gives her a personal connection to Kamala. The table is set for a big confrontation.

And that confrontation never comes. This is why I called “Time and Again” anticlimactic; it ends the Najma storyline abruptly, and it never pays off the conflict it strengthens. Kamala finds Aisha at the train station, and Aisha, with her dying breath, asks her great-granddaughter to save Sana. It was Kamala, via a bangle-assisted time warp, who rescued her grandmother and secured her family’s future. This is a neat idea, and it furthers the conflict with Najma; Najma tries to destroy the family while Kamala saves it. Then, just as quickly, the show squanders it. Once Kamala is back in the present, the portal to Noor opens, but Najma and her remaining henchwoman die like Indiana Jones villains, getting vaporized as they try to return. But Najma doesn’t die till she’s had the chance to redeem herself (as far as the show is concerned, anyway), sacrificing herself and giving her power to Kamran, the son she’d abandoned. After solidifying Najma’s wickedness, after showing us her cold-blooded murder of Aisha, all is forgiven, and Najma dies a loving mother. This is ridiculous, entirely unsatisfying, and a waste of what was almost a good villain. It feels like they were trying to replicate Spider-Man: No Way Home, but forgiveness and second chances were that movie’s themes; here, it doesn’t fit. Marvel’s reputation for insisting on apologizing for its female villains is being earned by their sloppy storytelling. 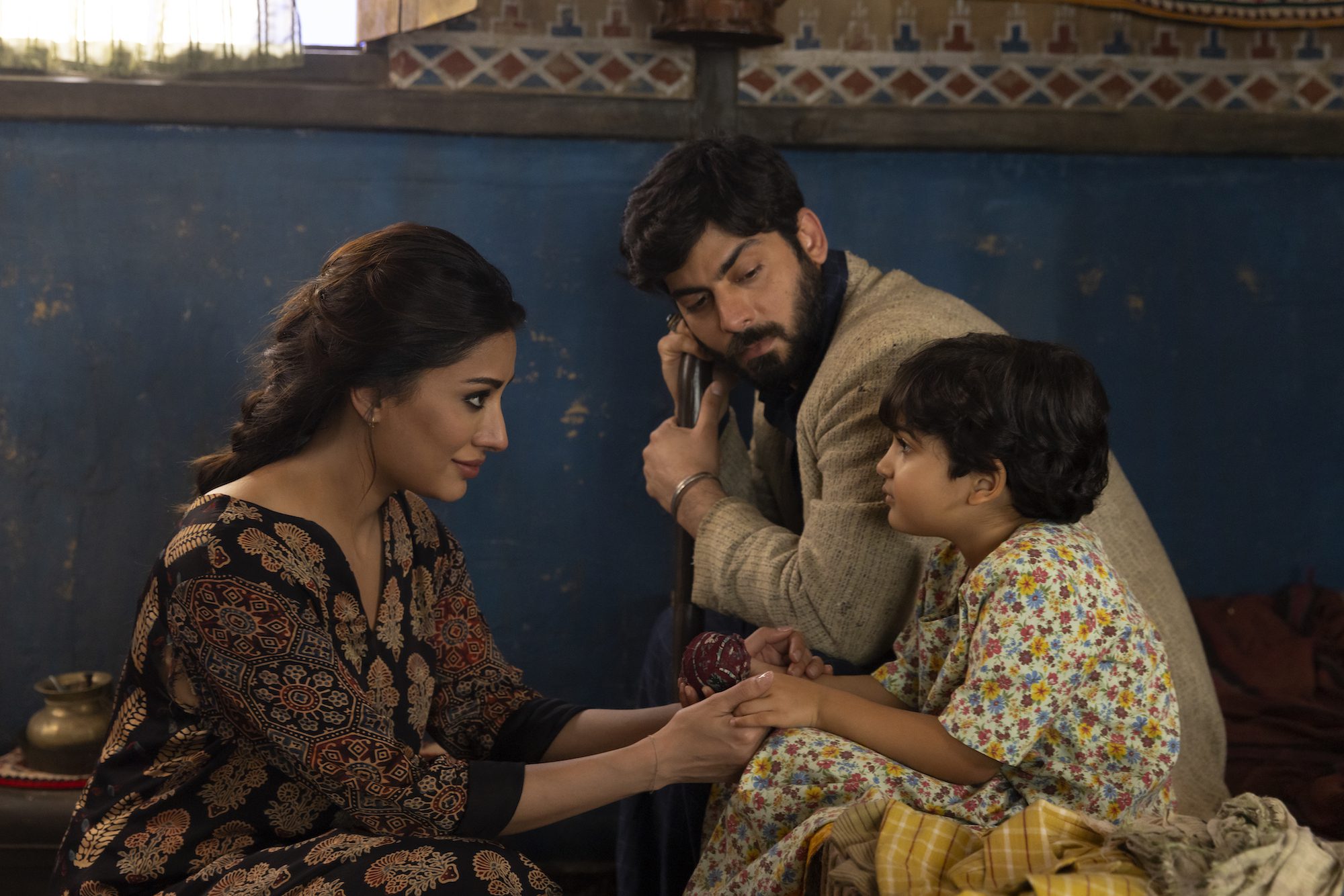 The other big event in “Time and Again” is Kamala’s mother, Muneeba, finally discovering that Kamala has superpowers. This occurs in the last few minutes of the episode when she and Sana show up for the final battle that isn’t a battle. She witnesses Kamala use the bangle, and… she pretty much takes it in stride. A repeated occurrence in “Time and Again” is people being exposed to magic and not being fazed by it one way or another. When Aisha reveals the power of the bangle to Hasan, he barely blinks. Then, when Kamala uses it to guide and protect Sana at the train station – which is otherwise an effective scene – no one else at the station seems to notice it outside of Hasan. There are blue energy blasts flying around, and not one of the hundreds of people walking around the station cares. The show doesn’t even try to turn this into a joke, like a Clark Kent’s glasses type of thing. There’s no wonder to these Marvel shows; nothing that grabs you and pulls you into the fantasy of a world where superheroes exist and the impossible becomes reality. This is another symptom of their rushed nature; Ms. Marvel needs to wrap things up, so internal logic and world-building are jettisoned in a mad dash to the finish line.

That leaves the wrap-up. Kamala has an extended goodbye scene with the masked guy she met five minutes ago, and it’s impossible to care. She also has a heart-to-heart-to-heart with Muneeba and Sana; this is better, partly because Kamala and Muneeba are actual characters played by good actresses. (And I have to say, I think Iman Vellani is good as Kamala; she’s got some awful material, but she makes it work as best she can.) Muneeba explaining that she’s so overbearing because she’s afraid of letting Kamala go is sweet and fits with her character. This is rushed too, which is a shame, but it still mostly works – what doesn’t work is an earlier scene with Muneeba, Sana, and those two jerk cousins of Kamala’s, which attempts humor but goes on so long that it ruins all the punchlines. So, we’ve got a boring-as-sin first half with a hollow love story, a wasted villain, a rushed familial resolution, and a weak setup for the finale, where the villain will be either Damage Control (which disappeared for a couple of episodes and feels like an afterthought) or Kamran (who just got his mother’s powers and has been a good dude so far). Ms. Marvel has one more episode, but for all practical purposes, it’s over.

“Time and Again” is the worst episode of Ms. Marvel yet, a series killer that prematurely ends the main conflict in as unsatisfying a manner as possible, wastes time with a boring love story, and rushes through the character moments that should have felt like big payoffs.

I have a request; could you be the one who reviews Love and Thunder? I am really dying to know if the movie is worth watching and Multiverse of Madness was reviewed by someone else. Your choice man, but I trust your opinions a lot!

Thanks, I appreciate that.

I agree with him about pretty much everything. Hated it.