"Things were clearer when we were just soldiers." 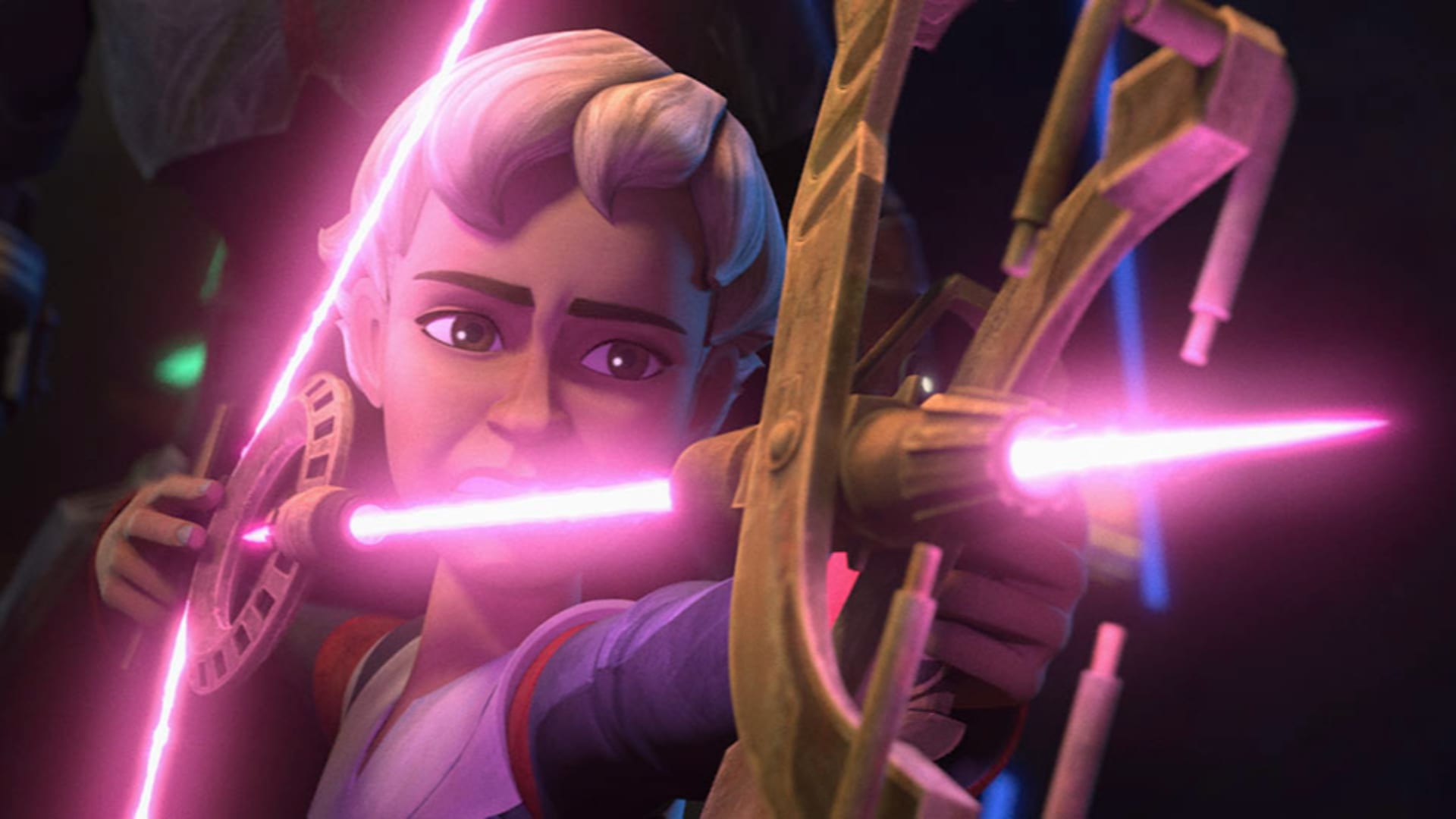 The Bad Batch had a particularly strong start, immediately followed by a couple of decent filler episodes. Let’s see if “Decommissioned” can kick things back into high gear.

“Decommissioned” finds Echo training Omega with a bow and arrow while Cid’s associates make bets on her performance. Cid interrupts this interlude to task the Batch with retrieving a Separatist tactical droid left over from the Clone Wars. She also demonstrates her own skill with the bow, telling Omega she misses because of her “weak noodle arms” and to keep practicing. After some reluctance on Hunter’s part, the group accepts the mission and heads to Corellia. They make their way into a decommissioning factory, and Omega spots the tactical droid’s head, but a shadowy figure whisks it away before Hunter can get to it. Disobeying his orders to stay put, Omega jumps down and chases the snatcher. It turns out Ahsoka’s old friends Rafa and Trace Martez are after the tactical droid as well, but the two factions are forced to work together as workers and police droids converge on them. They all escape together, and the droid’s head is destroyed in the commotion. However, Hunter gives Rafa a data rod with the intel from the droid, and the groups part ways on good terms. Back on their ship, Trace and Rafa contact a mysterious figure within the Rebellion and confirm that they have the intel.

I’m surprised to see Trace and Rafa return to Star Wars, especially so soon. Their arc in The Clone Wars wasn’t very well received, and they weren’t exactly fan-favorite characters themselves. Personally, I found Rafa to be particularly annoying, and some of her actions absolutely reprehensible in The Clone Wars. Not a lot really happens in “Decommissioned,” so I expect people’s opinions on the Martez sisters to more or less define how they see the episode. That’s somewhat the case for me; I have to admit, I’m getting a little tired of these filler episodes. I try to remember that in shows with longer seasons, there will probably be some filler. And I think it’s okay for the story to slow down sometimes, but something needs to fill the hole that leaves. Some examples of good filler episodes that come to mind include The Mandalorian season 2, episode 2, “The Passenger,” and “Tales of Ba Sing Se,” Avatar: The Last Airbender season 2, episode 15. In “The Passenger,” the bond between Din Djarin and Grogu continues to grow, and the krykna attack provides some decent action and horror. “Tales of Ba Sing Se” succeeds (and is widely considered one of Avatar’s best episodes) because it focuses on its characters, catching us up on what each main character has been up to in the big city before the season’s big showdown. I’ve tried to be patient with The Bad Batch because the first few episodes were so great, and The Clone Wars and Rebels had their fair share of less than amazing episodes. It’s also worth pointing out that this is episode 6 of 16, so there’s still a lot to go. But I don’t like filler episodes that seemingly exist to stretch the season out or merely provide buildup for later episodes.

For example, I’ve lost track of how many episodes have shown Wrecker hit his head and get a headache now. We get it; his chip is obviously messed up and probably going to cause him to go berserk at some point. I can’t speak for anyone else, but one or two episodes of buildup would have been more than sufficient for this. Or, heck, this could have happened over the course of a single episode and I wouldn’t have had a problem with it. The first time Wrecker was struck on his head and complained about it, I kind of figured this was leading to an inhibitor chip malfunction. We’ve already seen this happen to Crosshair, as well as Fives back in The Clone Wars season 6. I’m sure it’ll be very tense and emotional when the guys figure out what’s happening to Wrecker and have to remove his chip, or even more so if he splits off from them like Crosshair, although I think the former is more likely. I don’t have any problem with this storyline in theory, but I’m not sure why they’re dragging something this simple out over half a season (at least). As I mentioned, I also wasn’t thrilled with the inclusion/re-introduction of the Martez sisters in “Decommissioned,’’ especially Rafa. Now that Hunter gave her the data rod with the intel they were all after, I hope he had a backup made by Tech so they can still get their payout and stay in Cid’s good graces. This is the second time Cid has outright threatened to sell the Batch out if they won’t work for her – though I do think it was weird how Hunter grappled with this concept, given the fact that the Batch needs money to operate since breaking off from the Empire. Surely, it’s worth working for someone like Cid to keep food on the table and shield Omega’s anonymity. Besides, it’s not like the Batch as a group are principled or above taking dubious jobs.

That being said, I don’t really like Cid so far. And I don’t mean that she’s mean or unlikable; I think it’s clear that she can’t be trusted and may turn on the Batch at some point. But I don’t find her interesting, funny, or really much of anything. This is another thing that may improve with time; this is only her second episode, after all. To briefly touch on what I said last week regarding Omega becoming overpowered, she does get rescued by Trace in “Decommissioned,’’ but I don’t like how this is seen as a “redemption,” and Hunter thanks her, given that she’s the one that essentially left Omega for dead. She created the situation Omega needed to be saved from. They seem to essentially go back and forth between Omega needing to be saved or single-handedly saving the whole team. I think, with time, they’ll strike a balance where they all contribute equally in a fight rather than some individuals constantly being the one in danger or the savior.

Overall, “Decommissioned” is okay. It’s my least favorite episode of The Bad Batch so far. The animation, voice acting, and score by Kevin Kiner continue to impress, but there isn’t much else to praise this week.

Overall, “Decommissioned” is okay. It’s my least favorite episode of The Bad Batch so far. The animation, voice acting and score by Kevin Kiner continue to impress but there wasn’t much else to praise this week.