“Redemption” opens with two of Gideon’s troops waiting to deliver the Child. IG-11 beats them up and takes the baby, claiming to be his nurse droid. Meanwhile, Mando, Cara, and Greef Karga are stuck hiding in the Client’s bunker as Gideon’s men prepare to blow them to oblivion. Mando locates the Mandalorian hideout, and they discuss going there. However, before the group can sneak out of the building, Moff Gideon proposes that they cooperate with him to survive. IG-11 tears through the town, blasting troopers until he arrives to where the others are. Gideon sends a trooper in and he attacks them with a flamethrower; however, the Child is able to direct the fire back on him. They escape into the sewers and to the Mandalorian settlement, but they find only the Armorer and empty helmets. She gives Mando his clan signet in light of the Child being his foundling. She also gives him a Mandalorian jetpack and sends them on their way. IG-11 sacrifices himself, self-destructing among a group of Stormtroopers so his friends can escape. Gideon comes in a TIE fighter and Mando attaches himself to the craft. He plants a bomb on Gideon’s fighter and releases it. The ship explodes as Mando falls back to his friends. Cara decides to stay on Navarro, and Greef offers her a position as her enforcer. He also tells Mando he’s welcome back to the Guild with first pick of bounties, but he has to attend to the Child’s needs first. As Mando and the baby fly away, Gideon cuts his way out of his TIE fighter with the Mandalorian Darksaber. 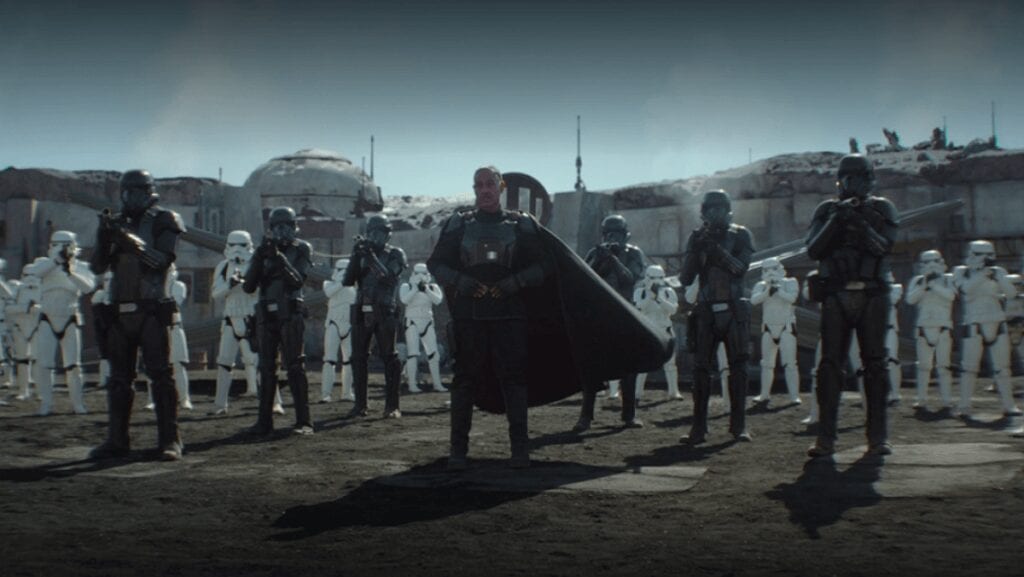 From its very first moment, “Redemption” had a firm grip on my attention, and it never once let go. This episode is a much better Star Wars finale than last week’s theatrical release, and displays perfectly some of the series’ overall strengths. We’ve seen battalions of Stormtroopers, TIE fighters, and glowing swords before. But when these fantastical forces are re-contextualized in a smaller setting with only a rag-tag team of friends standing against them, they become far more imposing. There are a couple of odd moments in the episode, such as when the Armorer dispatches several Stormtroopers on her own and with little difficulty. However, much like the season as a whole, I really liked this episode. The tension throughout “Redemption” is palpable, and several times I actually gasped or jumped. The action sequences in this chapter are fast-paced and inspired.

This season has been packed with callbacks and references to previous Star Wars properties. Personally, Moff Gideon emerging from his crashed ship bearing the Darksaber has to be my favorite. I’m still in shock from this. The Darksaber was created by Tarre Vizsla, the first-ever Mandalorian Jedi, during the age of the Old Republic, and eventually passed down to Clan Vizsla as the weapon of the Mand’alor, the Mandalorian leader. It was the subject of story arcs in both Star Wars: The Clone Wars and Rebels, most recently being given to Bo-Katan Kryze by Sabine Wren. I have to wonder how Gideon obtained the weapon and where it will end up in The Mandalorian. Could he have slain Bo-Katan personally? In “Redemption,” it is mentioned that Gideon led the raid on Mando’s village, as well as took part in the massacre of Mandalorians, so this would make a lot of sense. It also shows what a sick person Gideon is, as well as how talented a fighter he must be. While I was sad to see the Client go, they’re crafting a really great villain here, and I can’t wait to see more of him. It was another great moment, and one that literally took my breath away, when Mando and the others found the Mandalorians’ base empty and with scattered helmets. I thought they were going to do a bigger version of “The Sin’s” ending, and boy did the writers pull the rug right out from under me. Mandalorians as a group just can’t seem to catch a break, and to see their ancestral saber in the hands of an enemy is just chilling. 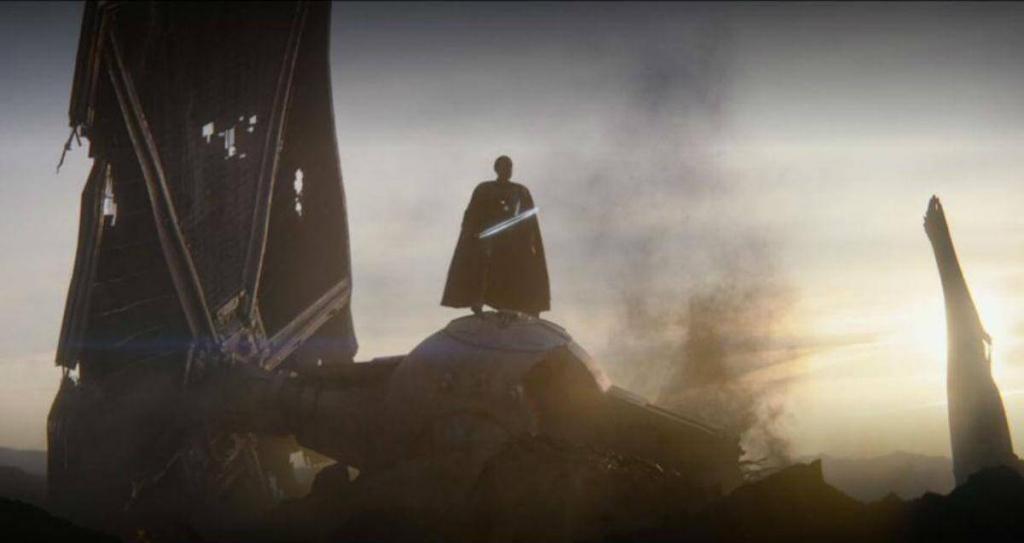 That being said, “Redemption” does a lot of big things for the series’ heroes, too. Both Kuill and his reprogrammed IG unit made the ultimate sacrifice so that Mando and the others could rescue “Baby Yoda.” Unlike any major story beats from the recent Star Wars films, this really made me feel something. Any time a character goes above and beyond in someone else’s interest, it gets to me, but Kuill doesn’t even really know the Child. That he would go to any lengths to save a random baby of no relation from the fate he suffered is just so sweet. I loved the shot near the end of Mando building a memorial to Kuill. He deserved it. It was also badass when Mando and Cara were holding troopers back with those huge handheld guns. Mando is at the center of several moving revelations, such as his real name and, eventually, his face. He reiterates that he was a foundling, and accepts the baby as his own. In a sense, he has become the man that saved and shaped his own life, and this will likely have a similar effect on the Child. 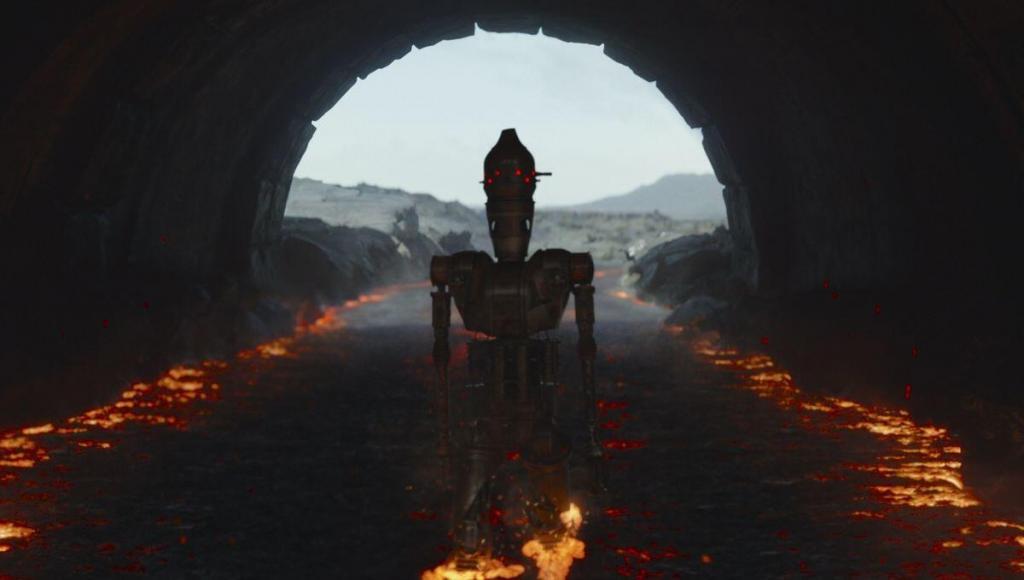 The visuals in “Redemption” are as good as you would expect from the rest of the season. The Darksaber looks animated in Gideon’s hand, like they took it right out of Clone Wars or Rebels. I quite like this aesthetic. Ludwig Göransson’s musical score continues to soar. Much like John Williams’ famous themes for the franchise, Göransson’s work accentuates and elevates action sequences, as well as slower, emotional story beats. While it still has its own unique sound, the score has a classic feel that fits so well among the Star Wars canon. As much can be said for the series as a whole, in fact: it maintains its own distinct flavor while blending perfectly into the larger narrative of that galaxy far, far away.

Overall, “Redemption” is an incredible finale to a season that has far and away exceeded my expectations. Between this and the upcoming Clone Wars revival, I genuinely feel for the first time since 2015 that Star Wars isn’t dead. It’s interesting that Disney and Lucasfilm should put out such soulless, abysmal films while Disney+ with Jon Favreau and Dave Filoni try to keep the spirit of the series alive with TV properties. What a time we live in. 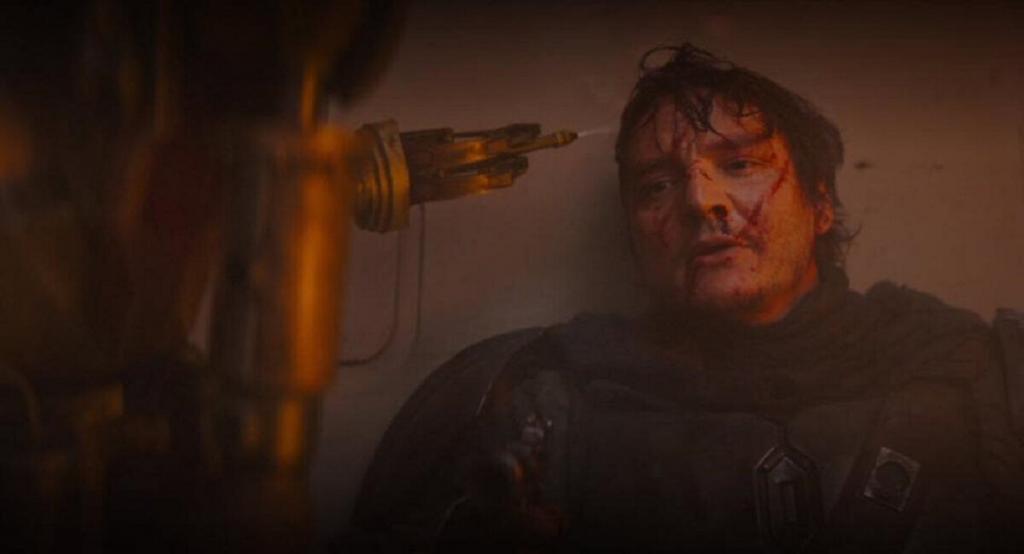 What have you thought of The Mandalorian so far? Better than the Disney trilogy of films? Can we call you a fan-dalorian? Tell us in the comments below!

The title "Redemption" may be read as somewhat meta because The Mandalorian is telling the bold and interesting stories this iconic franchise should be pursuing.