REVIEW: House of the Dragon – Season 1, Episode 4 “King of the Narrow Sea” 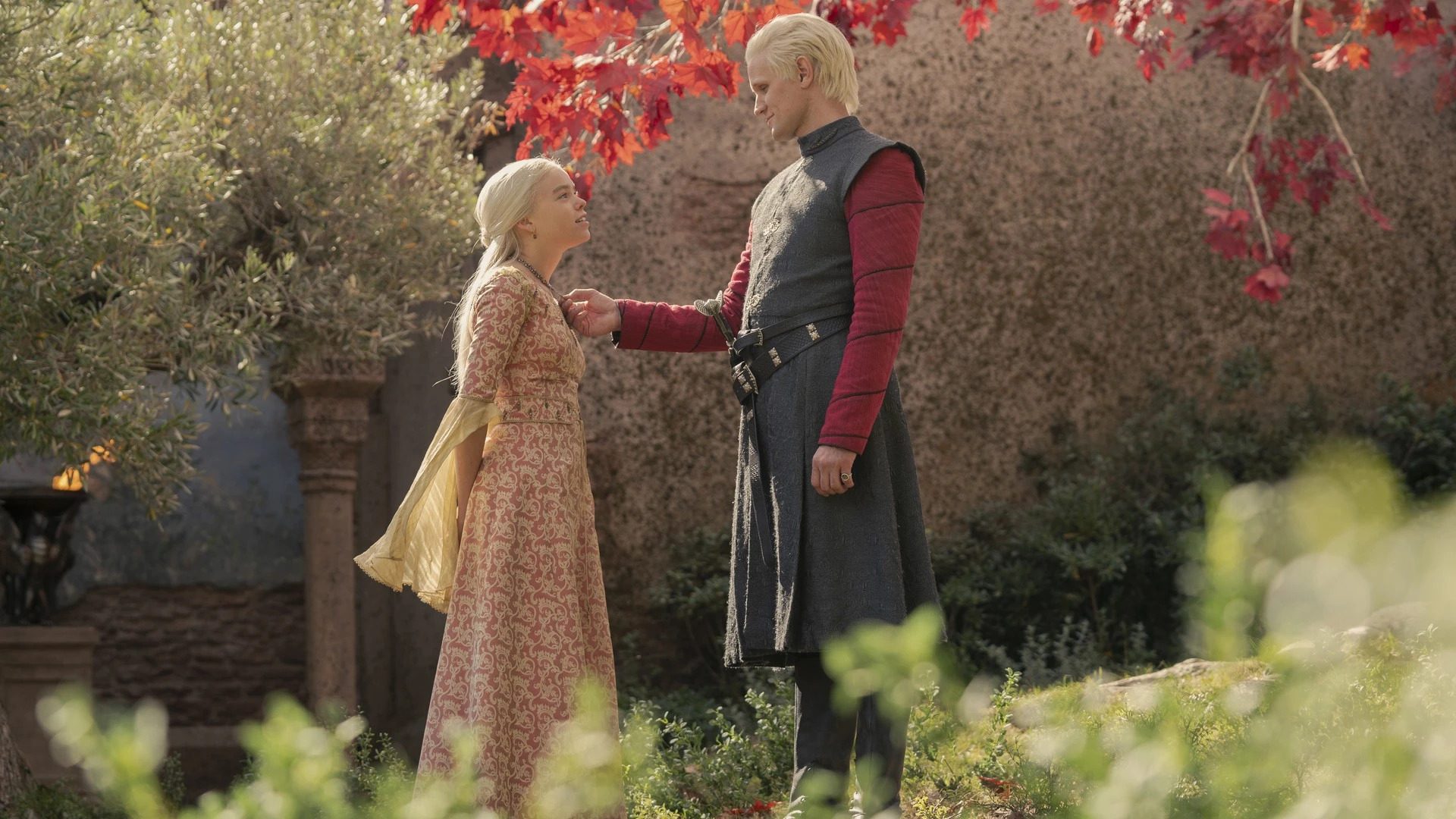 Following last week’s fantastic episode, House of the Dragon: “King of the Narrow Sea” had some rather large shoes to fill. Does it live up to its predecessor, “Second of his Name?” Not entirely, but it’s only marginally inferior and does not bring down this season. “King of the Narrow Sea” is also superior to the first two episodes, settling it comfortably as the second-best episode of House of the Dragon. “King of the Narrow Sea” gets all the simple things right – things would not need praise 20 years ago. A couple of minor issues bring down this episode from the quality of “Second of his Name,” mainly an inconsistent quality of political intrigue and a reliance on clichés. However, there is plenty of good buried in the points of criticism, and an argument can be made for each of these points in either a positive or negative direction.

Similar to “Second of his Name,” the highest point of praise for “King of the Narrow Sea” comes from its willingness to trust the audience in the simplest ways. In several instances, the visuals are subtle enough that the audience is able to figure out what is going on without relying on exposition. Body language, small prop and costume changes, and dialogue with double meanings contribute to this too. Trusting an audience to deduce plot elements was once the norm. However, especially when compared to The Lord of the Rings: The Rings of Power, a show’s ability to rely on the fans’ intelligence is rare and praiseworthy. The way “King of the Narrow Sea” accomplishes this is in no way profound or exceptional but is, again, so foreign in current-day that it deserves noting here.

“King of the Narrow Sea” begins Rhaenyra’s quest to find a suitable husband to fulfill her royal duty demanded by her king’s command. When no eligible suitor presents himself, she returns early to King’s Landing, infuriating her father at her cavalier aversion to her responsibilities as both heir and Princess. Relief from her father’s scorn arrives with Daemon’s victorious return from his defeat of the Crab Feeder. He has been named King of the Narrow Seas and has come to re-pledge his allegiance to his brother. Celebrations of his return ensue, and all seems right again in House Targaryen – that is until Rhaenyra is aided in escaping the palace to explore Flea Bottom as a commoner by Daemon. In their exploration, they end up in a brothel, where Daemon makes certain physical advances on his niece. However, Daemon is unable to go through with their union, abandoning Rhaenyra to find her own way back to the palace.

Events turn sour again when a spy brings word of Daemon and Rhaenyra’s exploits to Otto and, by extension, the king. Viserys must decide if this affects Rhaenyra’s position as heir and his newly restored relationship with his brother. Ultimately, he banishes Daemon to the Vale and commands Rhaenyra to marry the son of the Sea Snake, her choice of husband taken away because of her mistakes. 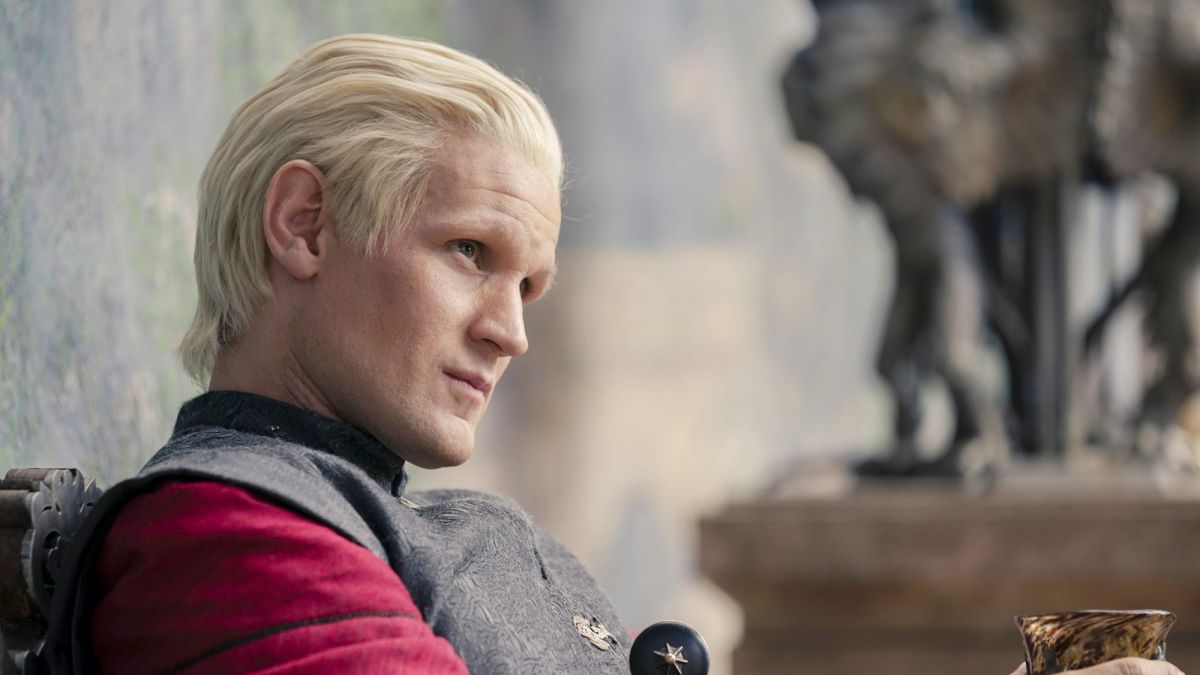 As has become the staple of House of the Dragon, the quality of dialogue in “King of the Narrow Sea” is fantastic. One line, in particular, stands out in a conversation between Daemon and Rhaenyra. While discussing the tragic passing of Rhaenyra’s mother, Daemon says, “You cannot live in fear, or you will forsake the best parts of it.” A simple yet intriguing concept that truly defines him as a character. Despite his lofty goals and rocky relationships, Daemon wants to get the most out of life, even if that means a short life. With a few minor tweaks to this line, it could become something truly profound for his character. “A merry life and a short one.” –Assassin’s Creed IV: Black Flag.

In a prime example of the writers trusting their audience, the scene where Rhaenyra finds the peasant clothes in her quarters and instructions on how to escape has no dialogue explaining why she wants to leave the palace and who gave her these instructions. The previous episodes have often displayed her as one not acclimated to the responsibilities of royalty, wishing instead for the freedom of peasantry. Particularly her conversation with Cole in “Second of his Name” depicts this thoroughly. If the audience can merely remember the many moments where she has displayed this wish for freedom, there is no need for any other exposition to explain why she leaps at this opportunity. The scene also refrains from explaining who delivered this opportunity to her, allowing them to figure out the obvious in Daemon before she eventually meets up with him. Again, this is incredibly basic storytelling and trust in the audience, but it feels exceptional here compared to the rest of modern television. The only minor criticism of this sequence is how Rhaenyra had never known about the incredibly easy-to-open and not-so-hidden secret door before this. It is a minor criticism, but it bears mentioning because she just needed to press the wall a little bit.

The entire sequence of these two sneaking around town is a tad cliché. It’s common to depict a royal member disguising themself and attempting to understand their subjects in anonymity. This cliché dates all the way back to Shakespeare’s Henry V, which saw King Henry trying the same thing. “King of the Narrow Sea” utilizes this cliché exceptionally well, developing several characters and intertwining it into the plot in great ways. However, it does not take away from the fact that it is a heavily used trope. Beyond the cliché nature, this sequence is incredibly compelling. There are so many great moments for both Daemon and Rhaenyra’s characters with minimal dialogue. It was established in “The Heirs of the Dragon” that these two had great chemistry. This, combined with their family’s incestuous history, properly set the groundwork for their attraction in this episode. It all comes across as natural and compelling, despite its taboo status in our world. 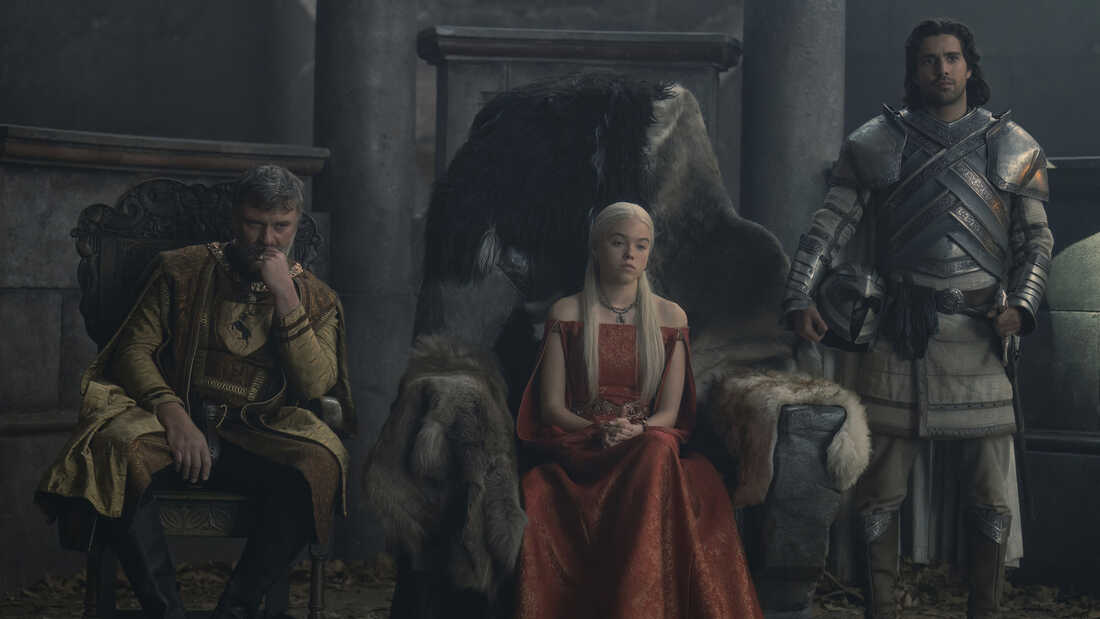 This episode belongs to Milly Alcock’s Rhaenyra, as the previous episode belonged to Paddy Considine’s Viserys. “King of the Narrow Sea” is the first episode where Rhaenyra comes across as a likable character. She shows a lot more range than she had previously and develops to such a degree that she steals the screen, even from the masterful Matt Smith. Her off-putting and whiny nature from the first two episodes has been left behind, resulting in a highly relatable character with understandable motivations and struggles. She is not just the feminist paragon, ala Galadriel, as the marketing and the behind-the-scenes interviews portrayed her. Her preconceived notions and victimhood are often challenged by other characters such as Cole, Daemon, and her father, and she accepts much of their contradictions. This far more nuanced approach makes her more intriguing, giving the audience everything they need simply to care about her. This episode featured far more emotional range for Alcock, truly allowing her to shine in some very subtle ways. With each episode, more characters are added to the list of fascinating ones that the audience can care about. House of the Dragon has become a prime example of how to do ensemble cast shows.

The final point of major criticism comes in the inconsistent application of intrigue throughout “King of the Narrow Sea.” Sometimes it is subtle, like Daemon taking off Rhaenyra’s head covering right before entering the brothel, allowing the spy to see her. Other times, it’s not sufficient to motivate the characters to make certain decisions, like Viserys removing Otto as Hand. Otto has been portrayed as incredibly intelligent and manipulative, far superior to many of his contemporaries. Viserys acknowledges that anyone in Otto’s position would have selfish designs, but Otto’s are balanced out by many selfless ones shown throughout this series. He clearly cares for the king and the realm deeply, despite his flaws. Otto has been portrayed as still the most balanced option for the position. There is just far too little in terms of intrigue or proper motivation for Viserys to remove Otto as hand. It bears a striking and uncomfortable resemblance to Varys’ sudden and narratively unjustified demise in Game of Thrones season 8. Perhaps this relatively weak point of the episode was a calculated risk to set up something superior in the subsequent episodes. However, as it stands, this is the most flawed part of the episode. 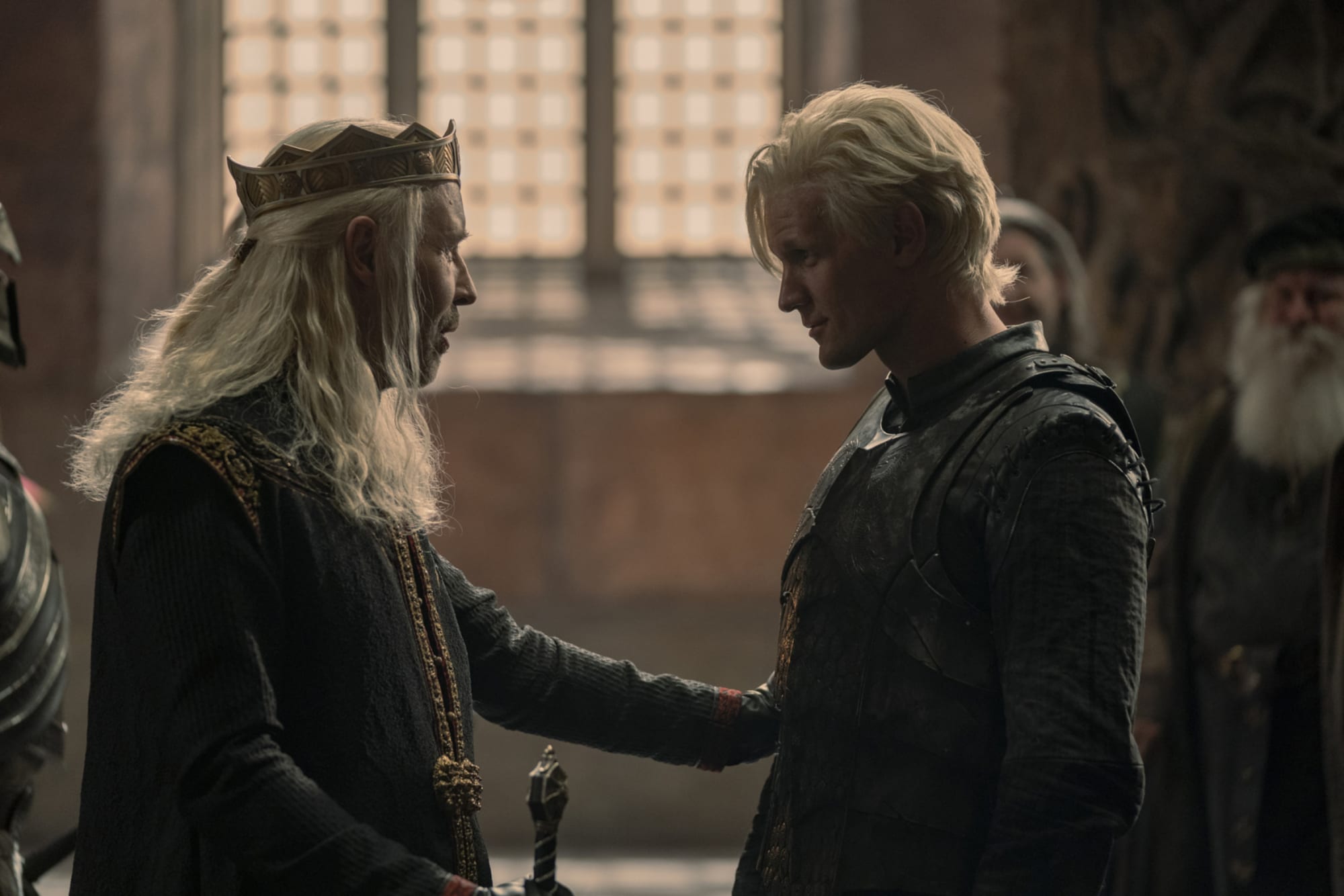 House of the Dragon continues to prove its worthiness as heir to the early seasons of Game of Thrones. Now, there are several characters that the audience can relate to and enjoy, giving everyone someone to connect with. The dialogue in “King of the Na+rrow Sea” is exceptional by modern standards, giving the world an immense degree of authenticity and depth. Its constant willingness to trust its audience to deduce much of the essential information is a breath of fresh air, setting it apart from its contemporaries. To say that a modern-day show, especially a follow-up to Game of Thrones season 8, is good and intelligent sounds implausible. Yet, “King of the Narrow Sea” is simply good.

House of the Dragon – Season 1, Episode 4 “King of the Narrow Sea”

House of the Dragon continues to prove its worthiness as heir to the early seasons of Game of Thrones.