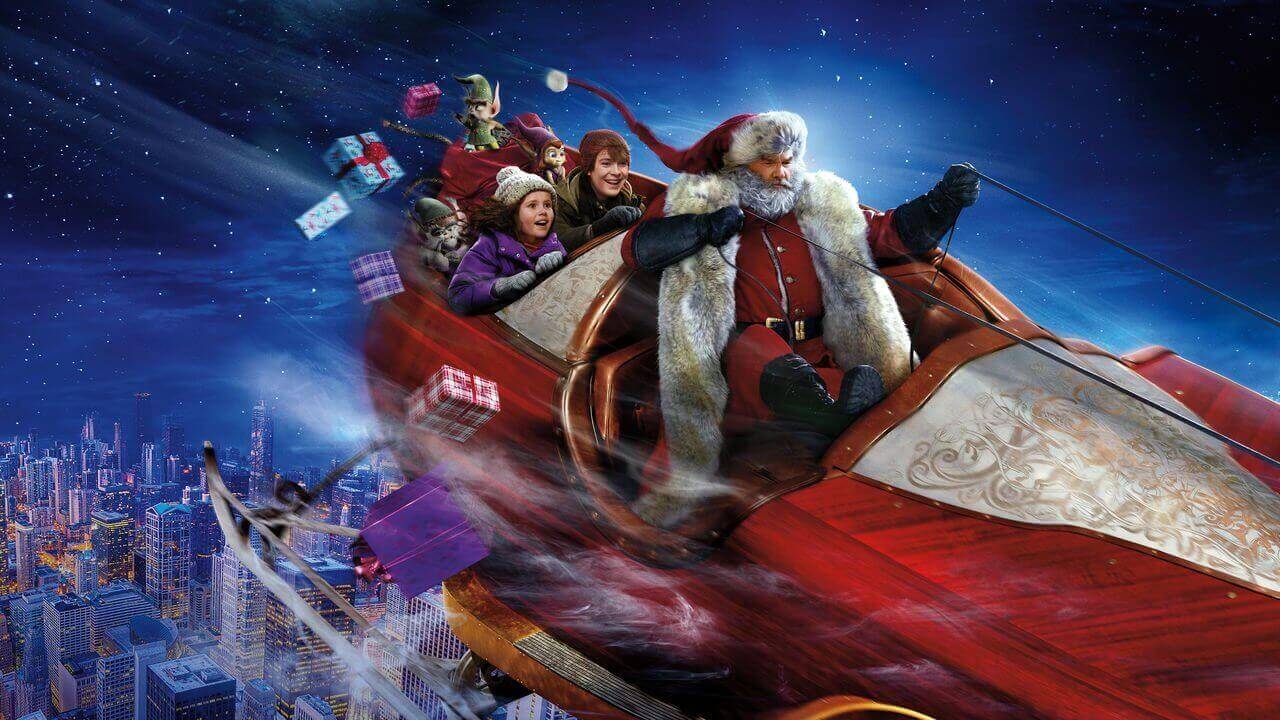 This Thanksgiving, Netflix released The Christmas Chronicles, a Christmas adventure starring Kurt Russell as Santa Claus. I love Christmas movies and Kurt Russell as an actor, so when I heard about this film, I was anxious to see it. Thanksgiving was a great day to release it, as for many people this holiday signals the beginning of the Christmas season. Let’s take a look and see just how magical this yuletide adventure is.

The Christmas Chronicles introduces us to brother and sister Kate and Teddy Pierce. We’re treated to several home videos of Christmases past showing the whole family happy together. In the present day, Kate is watching them on her dad’s old camera. It turns out Dad is now dead, Teddy’s a troubled teen and horrible big brother, and Mom has to constantly work her butt off to ensure the family’s survival. Kate witnesses Teddy and his friends stealing a car and offers him a deal: she won’t tell their mother if he stays up with her to get footage of Santa. Santa does indeed arrive later that night, and a series of mishaps leads to the two kids offering to help him save Christmas. Can they get presents to all the remaining children in time?

Christophe Beck of Frozen fame provides a perfectly serviceable musical score, replete with dramatic flourishes, as well as smaller, quieter moments. I have to say, though, that it’s a fairly forgettable soundtrack, and rather repetitive at times. It works well enough for the film, but you’ll probably completely forget about it afterwards. The visuals in The Christmas Chronicles are hot-and-cold; Santa’s sleigh and the Elves look great, but when he’s flying it’s quite obviously green-screened. I do appreciate the varied color palette in the movie, and it is competently filmed, but again, as with the music, I doubt anyone will be marveling at the cinematography. 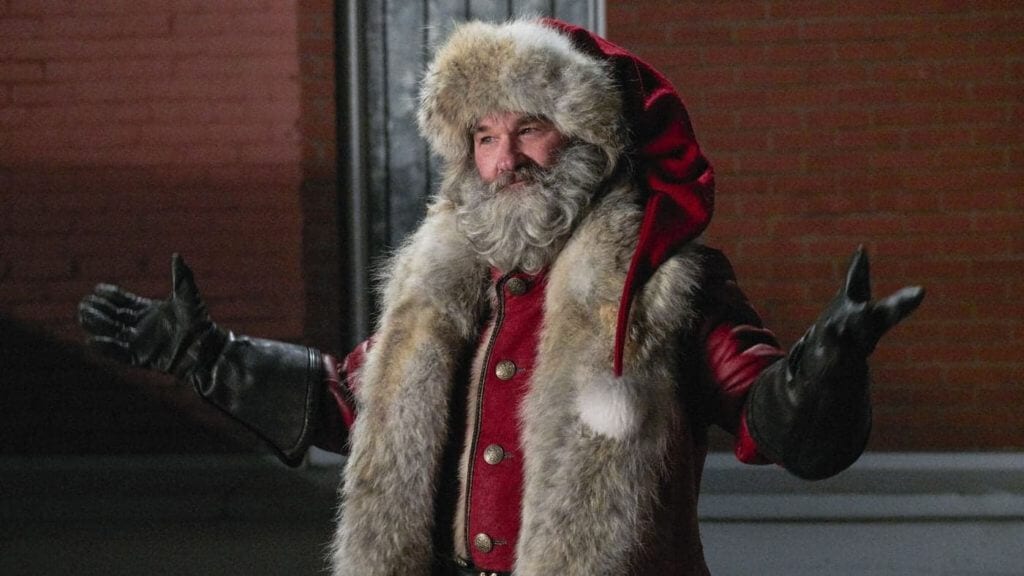 As for the cast of The Christmas Chronicles, I think Kurt Russell was a great choice; I’d watch him in just about anything, and here he delivers a very different kind of Santa Claus performance. Judah Lewis is pretty good as Teddy; he emotes well, and his wish seems quite sincere. I can’t say Darby Camp is bad as Kate because I don’t find her unconvincing, but oh my God, this kid is annoying! Her voice is like acid being poured into my ears, and while she’s technically right when arguing with her brother, she just sounds so whiny that I can’t take her seriously. Kimberly Williams-Paisley has a relatively small part as the kids’ mom Claire, and she’s perfectly fine but nothing to write home about. While the acting ranges from OK to pretty good, the characters didn’t do anything for me. I felt bad for Kate just for the fact that her brother’s a dumpster fire that treats her like dirt for no apparent reason, but as I mentioned, I found her annoying in her own ways. Teddy has a couple of tender moments near the end, but when he starts off as such a jerk, it’s difficult for me to care. The fact that their dad died is sad, but it doesn’t justify treating your sister like a literal and emotional punching bag. Even outside of their fights, the relationship between the two siblings doesn’t feel very sincere. They start out fighting like cats and dogs and making their mom miserable, and after the adventure is over, they magically get along. There are a couple of moments that indicate caring, like Teddy asking gangsters not to burn his sister alive, but this hardly constitutes character development, as I’m sure he would not have wanted that to begin with. I’d have liked a little more subtlety used here, and for there to be more of a progression of the improvement in their relationship throughout the film. Even the end doesn’t feel very heartfelt, and it’s not satisfying because the buildup wasn’t any good. If anything, there’s more evident sincerity in Claire’s reaction to the decorated house, and Teddy’s desire to see his dad one last time. But since the film’s main story is centered on the siblings and their growing closer, more effort should have been put into this and their characters as a whole.

I’m also not too keen on this version of Santa, and the way people respond to him. As I said previously, Russell is good, and I don’t really fault him for what I’m about to say. The Santa of The Christmas Chronicles is gruff, complains about people thinking he’s fat, and sings the blues to drum up Christmas spirit. I’d be lying if I said I didn’t respect the filmmakers for trying something new, but personally, I’m not really looking for a lean, mean version of Santa Claus. Throughout the film, people Santa encounters are skeptical of him, going as far as to call him crazy, a pedophile, and plenty of other colorful descriptions. At first, this didn’t bother me, but they drag this gag out way too far; one police officer puts Santa in jail and refuses to believe his story until he literally conjures instruments and performs live music with his fellow inmates. In fact, aside from the kids, this policeman is one of only two skeptical people who ever come to believe him throughout the film. I can appreciate doing this once or twice as a joke and to point out the absurdity of the situation, but boy, this joke gets stale fast. Although I like their designs OK, I don’t care for Santa’s Elves in this movie. They’re supposed to serve as the comedy relief, but they’re scarcely in the film, and when they are, irritation ensues. They remind me of the gargoyles in Disney’s The Hunchback of Notre Dame in that, rather than lighten the film’s tone, they clash with it. They feel less like characters and more like distractions and plot devices. 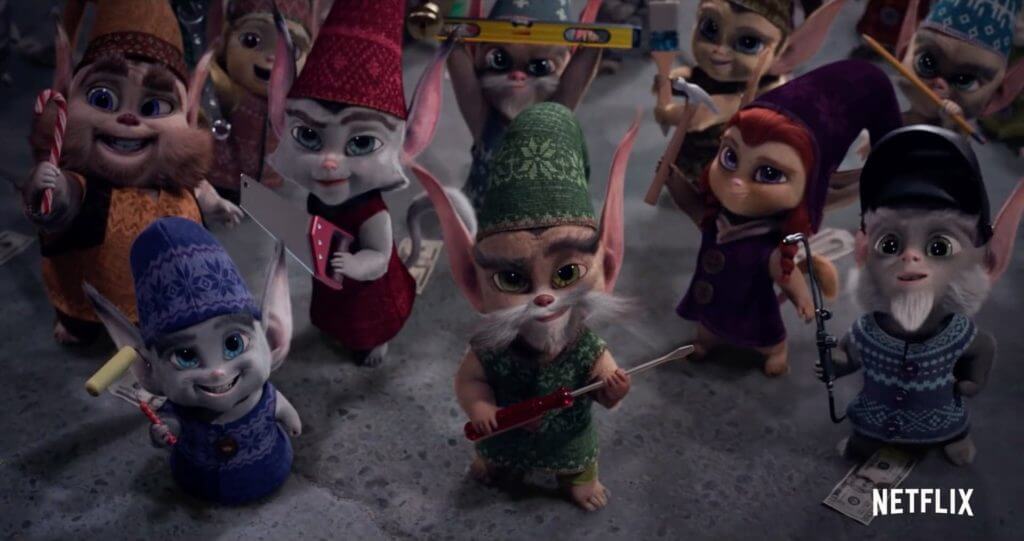 My main gripe with The Christmas Chronicles is that it just doesn’t make me feel the Christmas spirit. Unlikable characters, unearned resolutions, and a focus on the wrong narrative threads take a lot away from what could have been a decent Christmas flick. There’s also a very strange line delivered by Kate, something about how you can’t have Christmas without Santa and presents. This is a throwaway utterance and, in fairness, probably wasn’t meant to be the film’s message or anything like that, but wow, this feels wrong. Santa never corrects her, either. Much like in Arthur Christmas, the quest of the three characters is to get all the presents delivered by sunup; I give you that. But should the film and its characters not only accept but openly announce that Christmas is all about presents and Santa? To say I’m disappointed in this would be an understatement. Maybe the writers should watch some other Christmas movies; How the Grinch Stole Christmas and It’s a Wonderful Life, for example. If Christmas represents nothing more than getting stuff from an old man in a suit, then Christmas spirit is in even worse shape than Santa says in the film.

Overall, The Christmas Chronicles was a letdown for me. There are good things like Kurt Russell and some of the visuals, and I saw it for free on Netflix, so I don’t feel like I wasted my time or anything like that. That being said, this is not a feel-good Christmas movie like the ones I like. A good Christmas movie should make you feel good and give you a sense of hope, not reinforce the very cynicism Santa Claus should oppose and seek to remedy. I guess there’s no reason not to check this one out; as I said, it’s free if you have Netflix, and Kurt Russell is quite entertaining. But I don’t see The Christmas Chronicles becoming a Christmas classic, and honestly, it feels misguided and, frankly, wrong.

The Christmas Chronicles was a letdown for me. There are good things like Kurt Russell and some of the visuals, and I saw it for free on Netflix, so I don’t feel like I wasted my time or anything like that. That being said, this is not a feel good Christmas movie like the ones I like. A good Christmas movie should make you feel good and give you a sense of hope, not reinforce the very cynicism Santa Claus should oppose and seek to remedy.