"It takes a lot to earn my trust. Break it, and you won't get it back." 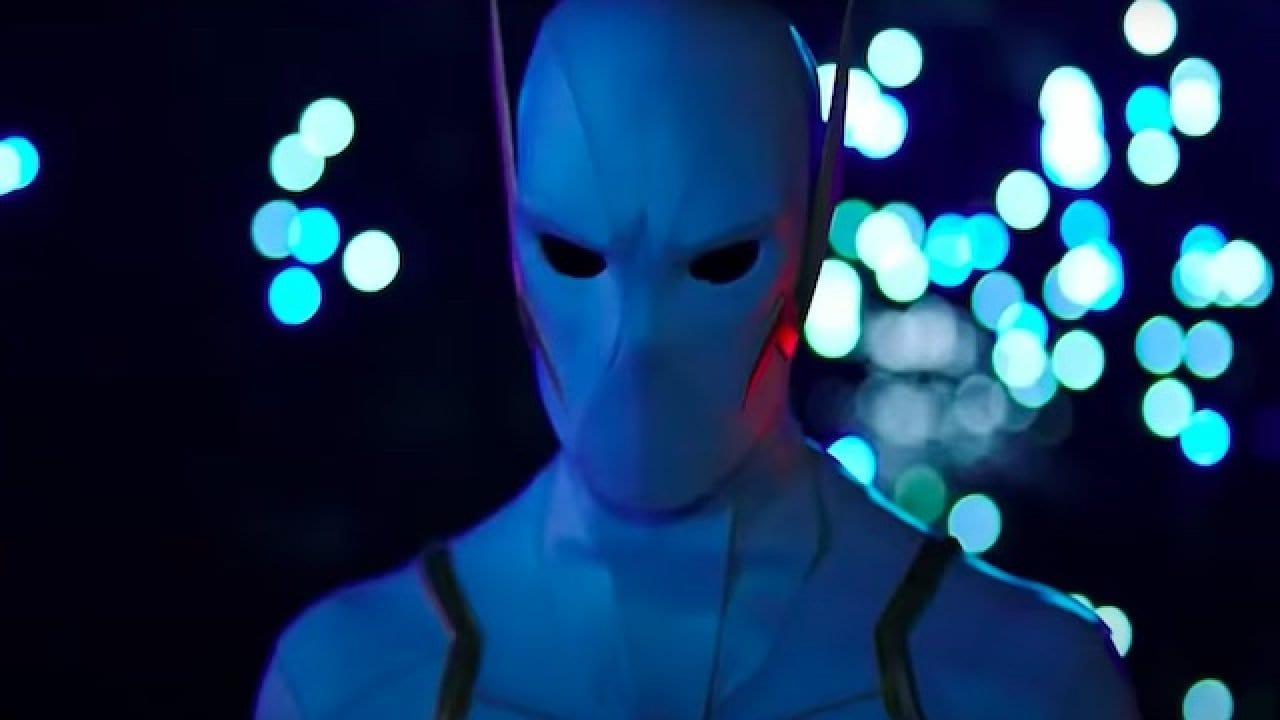 Well, the good news is that “Enemy at the Gates” is a marked improvement over The Flash’s recent output. The bad news is that the last few episodes have been so bad that there was almost nowhere to go but up. (I say “almost” because I’m learning not to underestimate modern television.) “Enemy at the Gates” isn’t good, but at least parts of it are fun.

An encouraging dream convinces Barry that Iris is pregnant. The Godspeed clones the show seemingly forgot about for almost two years resurface. Frost resolves to keep a close eye on Chillblaine. Caitlin and Allegra try to help Ultraviolet heal. Joe and Kramer make progress in their investigation. Chester is obnoxious.

If that sounds like a lot of different plotlines, it’s because it is. “Enemy at the Gates” feels like a bunch of subplots thrown together in the hopes they would form a coherent story. It doesn’t work, and it detracts from what could have been a good episode and the start of a great season if it had come early enough. Instead, none of these are given the attention they deserve – which, in a couple of cases, would have been none – and they bounce off the walls, never allowing one to become too great a focus.

The many Godspeed clones make for the closest thing to what constitutes an A-plot in “Enemy at the Gates,” and it brings back some of the elements The Flash has lacked of late. First of all, they’re villains Barry is allowed to fight, meaning there are some speedster brawls this week to break up the monotonous hug jamboree that has replaced superhero action on this show. After the first three seasons, I was one of many who felt The Flash needed to move on from speedster big bads, lest the series become too formulaic and predictable. I was catastrophically wrong; every villain since Savitar has been boring, lightweight, and ineffectual, failing to feel like a legitimate threat to Barry. They almost had a good one in the morally complex Bloodwork, but they turned him into a cartoon and sidelined him in favor of Eva, the wronged woman who just needed to forgive herself. Seeing Godspeed in action – even if these are just clones of him – brings to mind how riveting some of the super-fast fights were in the early years. It’s good not only to see Barry have his hands full with a bad guy again but to have him be the focus of the battle.

What grates about “Enemy at the Gates,” however, is that this plot should have been the basis for an entire season. An army of malevolent speedsters at war with each other, with the Flash caught in the middle, is an intriguing setup that could go in many possible directions and provide some fun action in a show that’s lost that part of itself. Instead, it’s being relegated to four episodes, fewer than that pointless Forces arc that refused to either go away or get interesting. But even with this jolt of lightning-fast adrenaline, The Flash’s more recent idiocy intrudes on the fun. When the Godspeed clones break into STAR Labs to fight the heroes, two of them take on Frost and Chillblaine. This should be a massacre; speedsters are insanely powerful just by virtue of their speed, and these two shouldn’t stand a chance against them. So, the clones instantly forget that they have super speed and trade normal, slower-than-slow blows with their would-be victims. Apparently, they believe in giving everyone a sporting chance in a fight. Couple that with Chester discovering that a speedster’s greatest weakness is rap music and you have a potentially rousing action sequence that crumbles under the weight of incomprehensible stupidity. 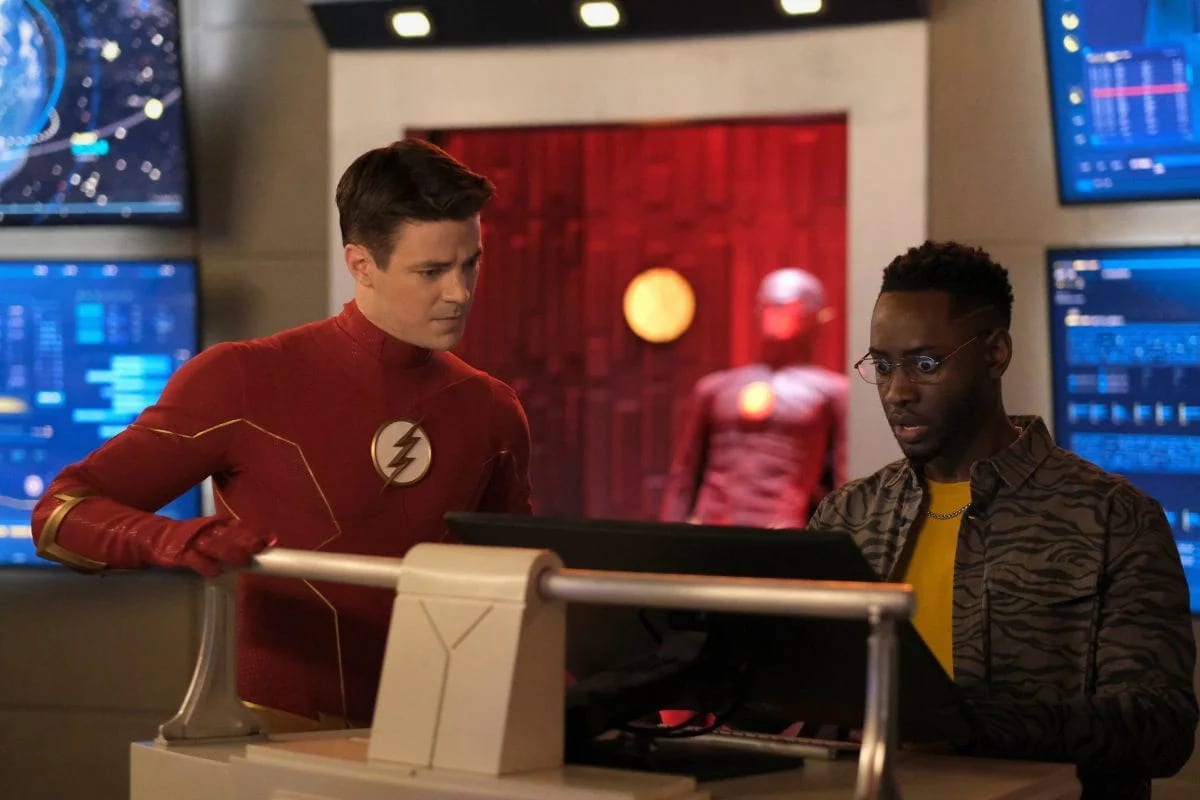 The other semi-major plot – I say “semi-major” because it’s treated no differently from boring interludes from useless characters – is Barry determining that Iris is pregnant. This is sort of dumb; what would a vision in a dream that doesn’t mention pregnancy have to do with Iris being pregnant? I know it’s his daughter, but she just tells him not to worry. It could be anything; I first assumed it meant he would somehow change the timeline and save Nora (which is suggested later, to be fair), but Barry goes right to babies. But, as silly as it seems, it also fits Barry’s character. He’s an eternal optimist, despite the hell he’s been through, and it makes sense for him to jump to that conclusion because it’s been his and Iris’ goal of late. That this works is more evidence that Grant Gustin is essential to this series; he sells Barry’s giddy assuredness and his excitement at being a dad, as well as his heartbreak when he learns that Iris isn’t actually pregnant. Speaking of whom, where is Candice Patton? I couldn’t find anything to explain why she’s been absent for the past couple of weeks. This show is running out of good actors and characters, and we’re getting stuck with Chester bumbling around and ruining potentially good scenes.

What else is going on in “Enemy at the Gates”? Not much that’s important, unfortunately. Joe and Kramer’s investigation is easily the most interesting storyline going right now, outside of this new speedster war, but it’s being sidelined for nonsense from the new characters. Here, it’s relegated to two scenes at the beginning and the end. I like where it’s heading, though, with Joe becoming a mentor to Kramer, both as a cop and on a moral level. It helps that Jesse L. Martin and Carmen Moore are easily the best actors on the show right now, next to Gustin. And I don’t think either one of them is dead after that stinger. Frost and Chillblaine’s “relationship” leaves me cold (you’re welcome); Chillblaine sucks as bad as his name does, and the two have zero chemistry. His scenes also feel like they were written by two different people who weren’t allowed to confer with each other; first, he’s adamantly lecturing Frost about how someone can change, then he’s insisting that he is who he is and there’s no changing him. And it looks like he’ll be back for more, so we’re stuck with another waste of screentime. Allegra and Ultraviolet are so dull I barely understood what was going on; Ultraviolet needs help, but she doesn’t trust Caitlin, but she does trust Allegra, so now she trusts Cailtin, or something that drags everything down with its insistence on existing. And Chester remains Chester; stupid, goofy, forced into storylines where he doesn’t fit. There are glimmers of something good this week, but it’s still a pretty lousy episode overall.

“Enemy at the Gates” introduces a potentially interesting plotline but does so too late to save a season where it should have been the main focus, and it’s marred by some awful writing towards the end. The side characters are mostly boring, but they get too much attention, and the only other good storyline is pushed the periphery. There are some good elements in play, but they’re offset by too many bad ones, and I don’t see The Flash rescuing itself anytime soon.

The Flash – "Enemy at the Gates"

“Enemy at the Gates” introduces a potentially interesting plotline but does so too late to save a season where it should have been the main focus, and it’s marred by some awful writing towards the end. The side characters are mostly boring, but they get too much attention, and the only other good storyline is pushed the periphery.