REVIEW: What If…? – Season 1, Episode 6 “What If… Killmonger Rescued Tony Stark?” 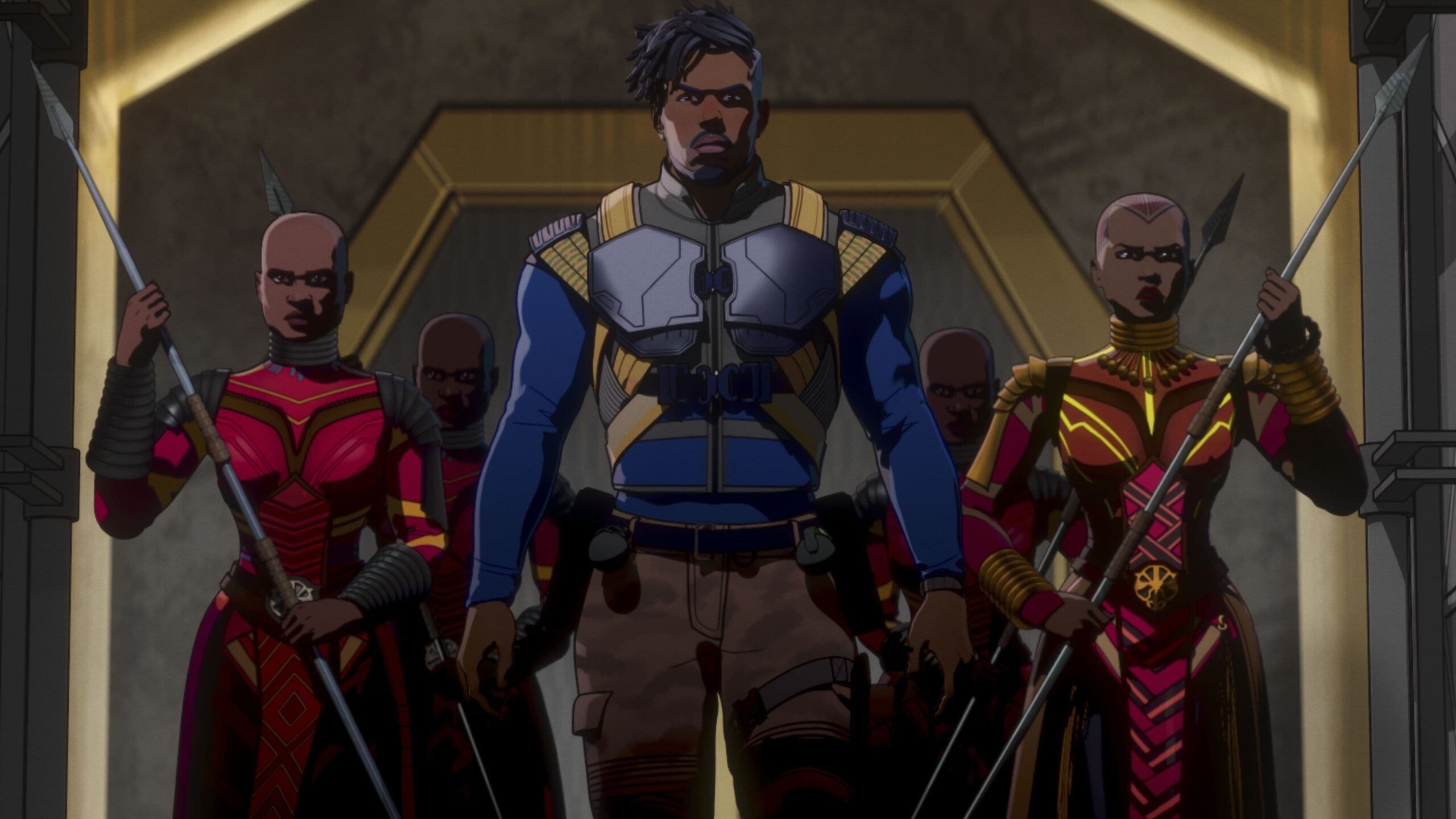 Does “What If… Killmonger Rescued Tony Stark?” end the winning streak Marvel’s new animated series has been skating since that dreadful second episode? Yes and no. It’s not bad, by any means, and it has some interesting ideas that it explores using the What If…? hook. The problem is, it has too much on its mind for a half-hour show and short-shrifts one of its two main characters, halting its exploration of forged heroism in its tracks.

When Tony Stark is ambushed in Afghanistan, he gets a last-minute reprieve from Killmonger, who rescues him from his own weapons and the terrorists who wield them. Once home, the two enter a partnership to develop even better armaments for the US military, with Tony Stark leaning harder into weapons manufacturing rather than abandoning it. But has Killmonger’s path changed as much as his new best friend’s has?

Once more, the actual change to the MCU storyline is not what is presented in the episode’s title. “What If… Killmonger Rescued Tony Stark?” is actually about Killmonger being assigned to infiltrate the Ten Rings organization (which, thanks to Shang-Chi, is allowed to be a thing again). Rescuing Tony Stark is simply the first major result of this change. And it leads to a quick resolution of the plot of Iron Man: Killmonger manages to expose Obadiah Stane almost immediately and makes enough of an impression on Tony that he becomes the new COO of Stark Industries about thirty seconds after Tony makes him his head of security. The world’s preeminent weapons designer is now paired with one of its deadliest killers, and the stage is set for a revolutionary leap forward in modern warfare.

The real point of “What If… Killmonger Rescued Tony Stark?” is how this new path changes both men – as well as whether it does. Tony Stark loses the experience that put him on the road to heroism, so he remains the frivolous billionaire industrialist he was before his encounter with the Ten Rings. Instead of having to experience the pain and horror of his weapons first-hand, he just sees them being appropriated by terrorists. Without that ordeal, he focuses solely on anger and pushes forward with his company’s most famous product. Tony doesn’t learn responsibility either, simply giving his new battle tech to the military instead of using it himself to save lives. He isn’t evil, just naïve and insulated from reality, believing he’s making a difference when he’s actually just keeping the wheel spinning.

At first, Killmonger appears to be headed in a similar direction, only inverted. Through Tony Stark, he’s got an opportunity to apply himself to something other than just killing on behalf of others. Now, he can reshape the way wars are fought and realize the potential that was denied to him when he was a child. But therein lies the rub; while “What If… Killmonger Rescued Tony Stark?” deprives Tony of his defining moment, it keeps Killmonger’s intact. He still had to watch T’Chaka kill his father, still had to live through being abandoned by his own people. Tony is not his new friend, but an opportunity to realize his vision of claiming for himself the homeland that cast him out like refuse. And this way, he gets to win; he kills T’Challa and manipulates Stark Industries and the US military into gaining him the Wakandan throne and the Black Panther mantle. Taking away Tony Stark’s epiphany has consequences even through people he’d never otherwise have met.

Killmonger’s arc proves to be more important than Tony’s – much more important, to the extent that he’s the actual focus of the episode. This isn’t necessarily a bad thing; Killmonger is a great character and one of the better MCU villains, and exploring his crusade in a different light is fascinating. We talk lovingly of giving people opportunities to better themselves, but what happens when an opportunity like that is given to one consumed with evil? While not dwelling on it or even referencing it directly, “What If… Killmonger Rescued Tony Stark?” alludes to his vision of a worldwide race war in admonishing Tony for refusing to see the differences in the two of them. And his manipulation of Tony, General Ross, Ulysses Klaue, and pretty much all of Wakanda is even more Machiavellian than his scheme in Black Panther, with shades of T’Challa’s battle strategy from Infinity War incorporated as well.

This does come at the expense of Tony Stark, however. The effects of losing Iron Man are never explored in-depth, either for Tony or the world. What there is of Tony’s arc is in service to Killmonger’s development; this point is made clear when Killmonger murders Tony halfway through the episode. I understand the desire to bait-and-switch the audience, but “What If… Killmonger Rescued Tony Stark?” puts a lot of emphasis on Tony in the beginning, so it’s jarring to see him cast aside with so much of the story still to go. The idea that Tony’s rescue prevents him from becoming a hero isn’t explored in much detail; they could have even made a counter-argument by having Killmonger’s turning be what pushes Tony to create the Iron Man armor, arguing that the hero always resided within and just needed to be released. A quick couple of lines at the end try to make up for this, but they fall short. The plot is still interesting, but it could have been better if it didn’t abandon Tony.

You’re going to be shocked to hear this, but the animation in “What If… Killmonger Rescued Tony Stark?” is still abysmal. Tony looks like he’s had Botox; his face barely moves, but it also has these weird lifts that give the impression of plastic surgery. Few of the other characters fare any better; Obadiah Stane looks nothing at all like Jeff Bridges, and the voice actor doesn’t sound like him, and Happy Hogan remains poorly designed. Killmonger looks like Michael B. Jordan, but the lack of expressions leaves the voice acting – which is pretty good – stranded. I do have to give credit to Mick Wingert, who voices Tony Stark; he sounds a lot like Robert Downey Jr., so much so that I originally thought it was Eric Loomis, who also perfectly recreated Downey’s voice in Earth’s Mightiest Heroes (an amazing show you should seek out and watch) and some video games. If What If…? could raise its animation standards to match the voice acting, it could be a great show.

“What If… Killmonger Rescued Tony Stark?” mostly keeps the quality of the series up, but it stumbles in its handling of Tony Stark’s arc. The animation is still bad, but the voice acting is some of the best on the show yet, and Killmonger’s storyline is fascinating.

“What If… Killmonger Rescued Tony Stark?” mostly keeps the quality of the series up, but it stumbles in its handling of Tony Stark’s arc. The animation is still bad, but the voice acting is some of the best on the show yet, and Killmonger’s storyline is fascinating.