As the mainstream comics industry lags in sales, independent comics are on the rise, with controversial figures like Ethan Van Sciver and Richard C. Meyer the most prominent faces of the burgeoning market. One enterprising new company hoping to make a name for themselves on the indie comics circuit is Constant Hustle Comics, and they’re launching their business with a series called The Last Line. The first issue will be available soon through the Constant Hustle Comics website, and while there is promise for the story’s future, the initial story is a bit lacking.

The Last Line follows Carson, a man who, after losing his wife to a massive battle between superheroes and villains, is determined to secure powers of his own, both to protect his children and to avenge their mother. Now, after two years spent scouring the earth, he’s finally found what he’s been looking for.

This is a great setup; I like the idea of a man who seeks out his superpowers after experiencing a tragedy. I also think it’s smart to keep from oversimplifying Carson’s motives; he wants to protect his children from a world where godlike beings can descend at any time and crush them like insects (the comic book version of teaching them to look both ways before crossing the street), but he also wants to have the power to pay back Pyro, the guy who killed his wife. This is how you make a character human, and Carson doesn’t fall into the trap of being too saintly or too grim.

The Last Line stumbles in its presentation of this story, however, and the problem is that it’s too rushed. Seeking out the powers should have been a multi-issue arc where the dynamics of the family were explored. We could maybe see Carson be overprotective of his children, establish that this is either something completely caused by his wife’s death or exacerbated by it. We could experience his drive to get powers become a dangerous obsession, possibly conflicting with his overprotectiveness in that he inadvertently puts his kids in danger while trying to keep them from it. (What sorts of unsavory types would he have to deal with to get these powers?) At the same time, we would get a better sense of how the kids feel; being uprooted for a quest to become a superhero has to take a toll on a child, particularly with a father that driven. The villains would have more room to breathe too, letting us feel how evil and dangerous they are beyond the one incident and the climax (which involve different bad guys anyway). But because this story is contained entirely in one issue, it feels like a rush to get to the end of the origin, and all that potential is lost. The ending similarly suffers, having little emotional weight to make the payoff as satisfying as it should be.

This problem extends to the dialogue; little is revealed about the main characters in The Last Line, but it doesn’t feel intentional, like a mystery waiting to be unraveled. It feels like an oversight. For instance, we don’t even learn the family’s last name, or the names of Carson’s wife or daughter; we just know Carson (whose name isn’t revealed till the end) and his son Miles. As with the storytelling, it’s hard to get invested in the characters when they’re not even named. The dialogue is also very stilted in places, with melodramatic proclamations and clunky banter. There are also several misspellings. Again, it feels rushed. 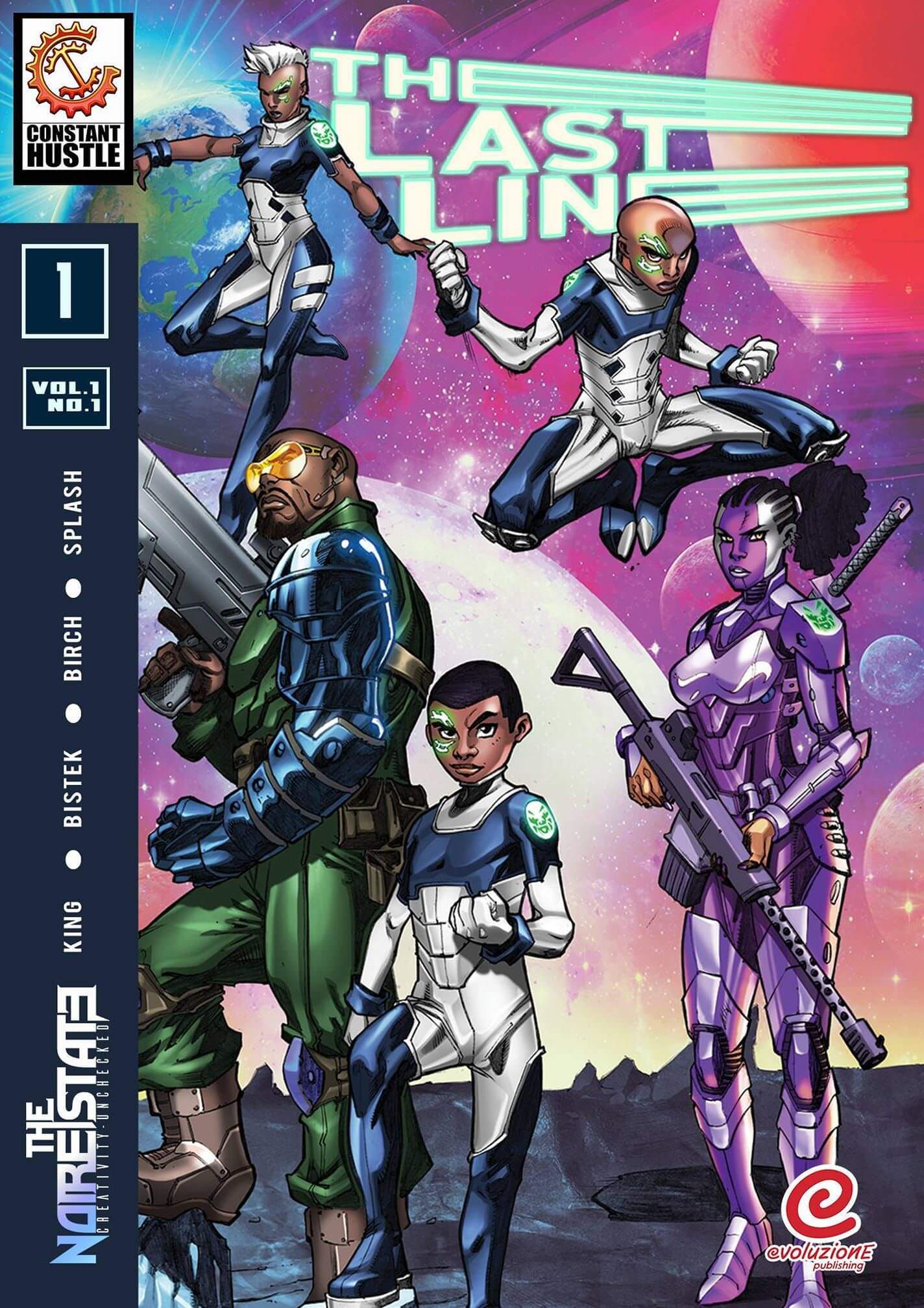 The artwork in The Last Line is good. It has a very 90s feel to it, and I mean that in a good way (not in a “tiny legs and feet on a gargantuan body” way). The characters are larger-than-life, befitting a world where superpeople are to be feared by the mortals trying to survive them. Drawing Carson, a regular guy, in a similar fashion smartly reflects his aspirations to attain powers; so completely has his quest consumed him that he resembles that which he wishes to become. The kids, conversely, are frail and vulnerable, not only everything we would be in that universe but exactly as their father sees them. The designs of the super suits are nothing extraordinary, but they’re in keeping with the workmanlike vibe the family has. While the rest of those with superpowers were gifted with them (well, probably; The Last Line doesn’t really get into this… not yet, at least), the family has to earn them, and the simplicity of their costumes reflect that. The fights look good, although the powers are not defined very well; that’s fine, though, as it’s something they probably don’t understand yet. I also like the shading done on Pyro, which makes him look as menacing as he should.

While this first issue leaves a lot of questions, The Last Line has the potential to improve. The villain who killed Carson’s wife is still out there, and he knows the family of his victim are his enemies. And once that’s over, there’s the question of what they do next. Do they pack it up and go home, their vengeance sated, or do they use their powers to help others? Will different members of the family feel differently about the answer? Then there is the murkiness of good and evil; the battle that killed Carson’s wife was fought between heroes and villains alike. While it was Pyro who killed her, a lot of other people died too, and not all of them may have been due to the bad guys. The Last Line could cover similar territory to The Boys, where the heroes need to be kept in check as well. There are several directions in which it can go, and they can all be fun and exciting. The people at Constant Hustle are clearly passionate about comics; they just need a little time to find their footing.

The Last Line is a story with a lot of potential if it can just slow down and get to all those juicy details. This is a family you'll want to get to know intimately, and I look forward to getting the chance in the future.