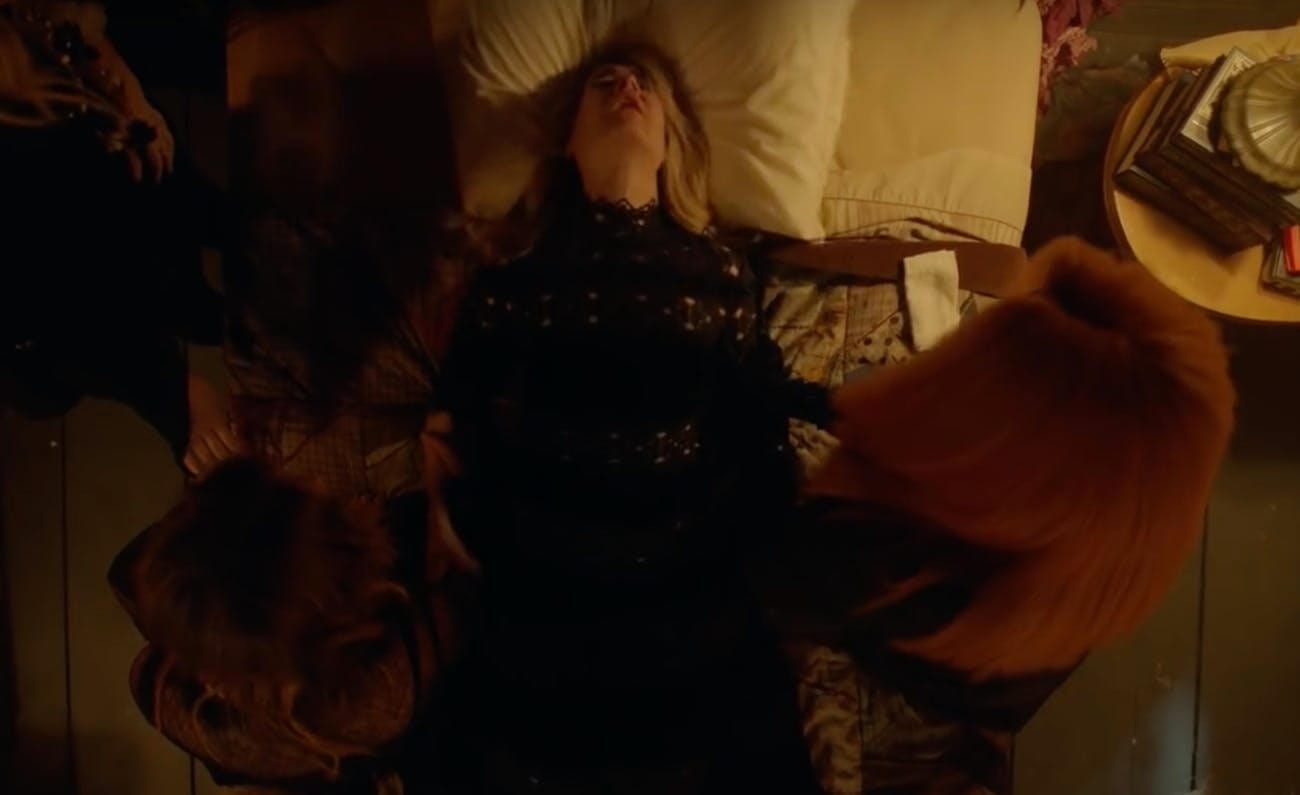 “Fire and Reign” begins with robot builders Jeff and Mutt arguing about Michael and his effectiveness as the Antichrist. Ms. Venable steps in to remind them of the Cooperative meeting and asks what it’s about. They tell her that it’s not her domain, provoking a rant from Venable about how she’s given everything to the company and deserves more agency within it. They again decline, so she says she won’t make their airline arrangements and resigns. Meanwhile, at the academy, Mallory tries and fails to revive a dead bird. Myrtle and Cordelia tell her that she’s just pushing herself too hard. Cordelia also tells her about a protective spell she’s cast on the school: only witches can enter; not regular humans, demons or anything else. Zoe and Queenie are teaching the class about protective enchantments; all the while Dinah is outside, undoing the one Cordelia cast over the building.  This allows Michael and Mrs. Meade to enter, and they kill the girls. Only Cordelia, Myrtle, Coco, Mallory and Madison escape. Dinah looks on regretfully as Michael informs her that she’ll have a 13-episode talk show. Michael is disappointed that Cordelia escaped. Meade, under the control of Jeff and Mutt, tells Michael to go to them for advice on how to destroy the world. He agrees, and they tell him that he just needs to tell the Cooperative what he wants to be done. He decides to do so after being convinced that it would be enough to kill the witches.

Speaking of the witches, Cordelia has them hidden in Misty’s old shack; Misty is “galavanting” somewhere with Stevie Nicks. Cordelia checks on the dead girls at Robichaux and is unable to revive them. Madison tells her about Michael’s power to destroy souls, prompting anger from Cordelia at not being told sooner. Myrtle tells the girls about Tempus Infinitum, the ability to time travel, long thought to be a myth amongst witches. Regardless, she and Cordelia believe Mallory may be able to do it. They send her back to the Bolshevik Revolution with the instruction to change history and save Princess Anastasia. This way they can test Mallory’s powers without Michael finding out. She comes close but fails, stating that she wants to go back and try again. Myrtle thinks this proves that Mallory can go back and save the coven, but Cordelia doesn’t think Mallory will be ready until she dies, relinquishing the role of Supreme. Myrtle says they just need to buy some time; the witches head to the Warlock academy, but the men are dead, their bodies arranged in the shape of a pentagram. Jeff and Mutt tell Ms. Venable about the Illuminati and the coming apocalypse. They offer her a position of authority in one of the Outposts, telling her that she wouldn’t have to answer to anyone. Michael and Mrs. Meade arrive to meet with the Cooperative/Illuminati, and he tells them about his plans.

“Fire and Reign” has quite a bit of comedy in it, particularly in scenes with Mutt and Jeff. The scene where they’re controlling Mrs. Meade killed me; the bits where they make her say they were really smart and good-looking, and call him out on wanting to act out the plot of The Omen 3 are gold. I also laughed when they insult his haircut, because they have the worst haircuts on the show. Everything about these two is just hilarious, and their levity is appreciated, particularly as it is in stark contrast to the plotline with Michael and the coven. The reveal that the Cooperative is actually the Illuminati is also interesting. I’m intrigued by Ms. Venable in this timeline; they’ve shown this character in 5 or 6 episodes now, and in two different time periods, but we still don’t really know anything about her. I love her exaggerated look in these scenes in “Fire and Reign;” with the bright red hair and purple clothes she reminds me of Daphne from Scooby-Doo.

While Dinah has openly admitted that she only works for personal gain, I must admit I was a little surprised to see her betray Cordelia like she does in “Fire and Reign.” It also makes me wonder why Cordelia hides Dinah with her girls in the Outpost in the first place. Self-interest is one thing, but what Dinah does here is straight-up evil. She’s allowing the extermination of her own kind in exchange for a TV show. It’s really distressing seeing Zoe and Queenie killed, in particular; Misty was lucky not to be there at the time. I don’t understand how they intend to wrap this story up in one more episode, and at this point, I’m a fan of the theory that season 9 will serve as a sequel to this one. It would be possible to tie up all these plot threads and timelines in one episode, but I don’t think it would be satisfying, particularly the final battle. I liked how they brought in the Romanoffs and the Bolsheviks, though I was hoping that Mallory would succeed in her mission. In fact, even when she returned to the present, I wanted her to go back and save them after all. However, “Fire and Reign” was already packed and extremely brief at 38 minutes. Several episodes this season have felt this way, and it’s partly because the story has been so engaging, but I also think there have typically been more of the special, extra-long episodes in the past. “Return to Murder House,” running 90 minutes, has been the only one this year thus far.

I really enjoyed “Fire and Reign.” It’s no “Could it be…Satan?”, but I certainly enjoyed it more than “Sojourn.” “Fire and Reign” is funny, dramatic and exciting. Some things didn’t go the way I wished or expected, but the acting was excellent and the execution nearly beyond reproach. This has been a really solid season overall and has quickly become one of my favorites. I don’t know how they’ll be able to wrap up such a massive story next week, or if they may expand the plot to two seasons. I’d like to see the latter happen, but either way, I can’t wait to see what happens in the season finale.

I really enjoyed “Fire and Reign.” It’s no “Could it be...Satan?”, but I certainly enjoyed it more than “Sojourn”. “Fire and Reign” is funny, dramatic and exciting. Some things didn’t go the way I wished or expected, but the acting was excellent and the execution nearly beyond reproach. This has been a really solid season overall, and has quickly become one of my favorites. I don’t know how they’ll be able to wrap up such a massive story next week, or if they may expand the plot to two seasons. I’d like to see the latter happen, but either way, I can’t wait to see what happens in the season finale.